we have two of Maytech 100A ESCs that I picked up from my bro Jens at E-Toxx, the SkullBoardVIP ESC arriving any minute, and the Verreal F1 / Wowgo2 ESC, in this particular mule.

PS if you’re associated with Skatemetric - bro I send people to your site, best reviews on YouTube and big, big fan of the foosted build. thanks for sharing the stoke, mean it.

Anyway what kind of risers are you guys using? I’m on an old school board, 1/2” risers, caliber 44 baseplate, purple bushing and I manage to throw myself out of the board with a wheel bite, that on a automotive style tire, isn’t forgiving.

@topcloud I read it again and finally got it lol. Long day for me

I use @alphamail’s Riptide risers on this prototype Evo with Rayne cork shock pads. http://www.riptidesports.com/electric-skateboard/

I had new Riptide cups in this build, yet the rough edges on the Chinese hanger tore the Riptide cups.

I filed the hanger smooth, by hand, and then reinstalled the factory cups with a little graphite to stop the creaking.

Tomorrow, we will run the hubs ten miles on 10S3P. 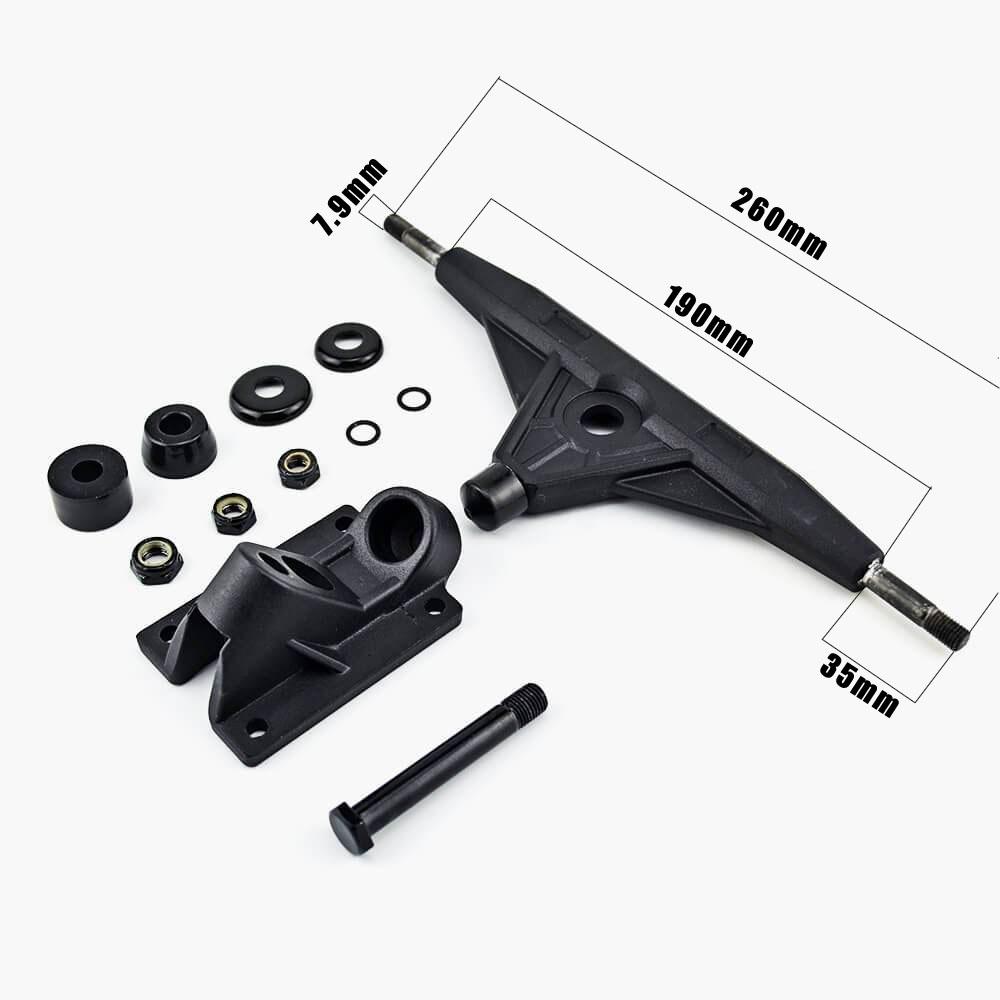 Hey there guys! I was originally only going to pick up the skullboard rear truck kit + front wheels…But ultimately, i did not want to go taking apart my current set up which is working soooo perfect for me right now.

Sooo to rule out any esc incompatibilities and such, I opted to just buy a complete skullboard (s1 model). Charged it up to 99% last night and took it out for my first spin… Tonight I charged it to 100% and took it out again. And I have the same report for both rides… I definitely was looking forward to a nice smooth cushioned ride with those big soft rubber wheels, But that was definitely not the case… At the moment, I do not fully know the cause of the issue - but I have lots of vibration vibrationnn vibrationnnnnn… I checked allllll the nuts and bolts and everything is secure. After riding the board for only about 5 minutes, my feet are tingly and toes are numbing. Definitely more noticeable vibration at slower speeds. BOTH front and back feet are getting the vibration. I was anticipating a much more cushioned ride, but that is simply not the case! It is noticeably loud. makes my wowgo2s on avenue trucks sound silent and muchhh much smoother in comparison. I wonder if it’s the pattern of the tread, Making the sound/vibration… or if it is the motors… but I’m not 100% sure. When i test the motors up off the ground, they spin smoothly without any vibration or noise… With the board flipped over, testing the wheels - Visually they stay very uniform and there is not wobble to indicate that they may be unbalanced etc… There is a VERY loud sound associated with carving in the front wheels. It sounds unhealthy. (This is on very smooth pavement in my condo’s very large parking lot.) I took it out across the street to much larger parking area by where the asphalt is much rougher, and it definitely is tough on the feet out there too. The large tires did help absorb the large bumps and cracks when I rode through them to test it… But i’m a little torn about that payoff, because with the wheels, i’m also getting much much more vibration, and noise, and rough riding ALL the time on the S1. The skullboard s1 did not make it up the same hill my wowgo2s does. (Both at the highest speed setting.) The s1 crapped out about 60% up the hill to a full stop. I pushed on the throttle til it just would not go anymore… First attempt up the hill was at 75% battery. Second attempt up the hill was with 100% battery. Same exact result. I rode the board until my remote buzzed stating that the battery was at 25%. At this point, there was very significant lag off the line… My total ride time was much shorter than my wowgo2s. and in comparison, my test ride wasn’t even really pushing the speed and terrain as I do i standard rides… When i got home, i touched the rear hubs and truck to feel how hot it was… couldn’t keep my fingers on it for 2 seconds. it was hotttttttt… like worrisome hot… Also, Skullboard s1 was delivered with wires backwards on the hubs so the remote reverse switch is flopped… It is a small deal but man… good quality control is in the details! I’m surely not impressed by the skullboard s1 full setup and those rubber wheels at the moment… But perhaps this can change if I can solve the battery power and torque issues first, then figure out where alllll this vibration and noise is coming from. I’ll try and get some video footage of the sounds and such this weekend.

I also came from a Wowgo2s setup (using Paris truck up front and baseplate in the rear). Vibration at low speeds is present but more likely due to tread pattern, and I sincerely doubt that’s what’s causing your particular vibration issues! Maybe switch out your front truck to isolate if it’s coming from front or rear for now. Check the tightness of your kingpins and make sure the wheels aren’t torqued on too tight or loose (common with some of the value boards).

I have also experienced the torque loss compared to the Wowgo hubs but didn’t check to see if it was overheating. It just doesn’t “feel” as quick.

I tested the hubs a little today, and in SF they feel a bit underpowered. I suggest for hilly areas to opt for a 12s setup.

@SKULLBOARD the ESC seems very similar to ownboard/wowgo one. They both support 12s batteries. Will your ESC be able to run on 12s without issues?

I checked a few times and the hub was a little warm, so I don’t think the underpower was due to temperature.

In my testing, Wowgo 2S ESC didn’t support 12s setup. Only 10s worked. The only budget board ESC that supported 12s was the early Meepo ESC from what I tried. I don’t know if the latest Meepo ESC supports 12s. Haven’t tried that.

The only budget board ESC that supported 12s was the early Meepo ESC from what I tried. I don’t know if the latest Meepo ESC supports 12s. Haven’t tried that.

I’ve at home the Ownboard one, which I presume it’s the same. Worked for me.

Did you guys have pretty significant noise or vibrations from carving too?

No noise or significant vibrations on my end.

I’d be surprised if vesc didnt make these perform better. We had the same issue with Pulseboards Echo, when you run a generic esc like ownboard and it is not configured well, the torque is just average and when you run VESC you immediately see a bump In torque and overall performance, even better battery life.

Would a swap to VESC while using the same original battery still come with improvements? Would i still be able to use the existing remote and get all the same functionality out of it? Sorrrryy I know nothing about about programming/configuring vescs and such.

Some but I’d swap to Sanyo 20700 , Samsung 25r or 30q cells for max upgrades. As long as you can disconnect the remote receiver from the esc you can re-use it with vesc

I need to see if it plays nice, it would be perfect for my crusier

Works, however the annoying thing with the ownboard one is that when the battery is fully charged till do a couple of miles the ESC complains (the remote vibrates and brakes the board when not accelerating)