I purchased two 4.12 VESC’s from Enertion way back 2016. Sadly that summer was pretty much over by the time I got all my parts for my first build. Next summer was very cold and I had other shenanigans, but now it’s warm again and I figured I could try to build my board.

I started by checking if I could update my VESC’s that had never been powered on before and immediately halted by not getting these things appearing in windows 10 device manager, first I tried with half charged 3S LiPo, and nothing but blue light shines on the ESC’s.

Then I did the TeamViewer dance with Enertion support and they claimed it has to be at least 6S battery in order to work, so I did what I could and put two very beefy 4S pack’s in series, measured 30V output and connected with anti-spark XT90 connector, but it was exactly the same, just blue light no new devices.

Guy had no clue what to do and suggested I should ask here if anyone has any idea what might be going on.

I suppose it doesn’t matter if they are connected to a motor or not in order to poke at them under windows. Like I said, I have never installed or powered these before this day.

Any bright minds out there? 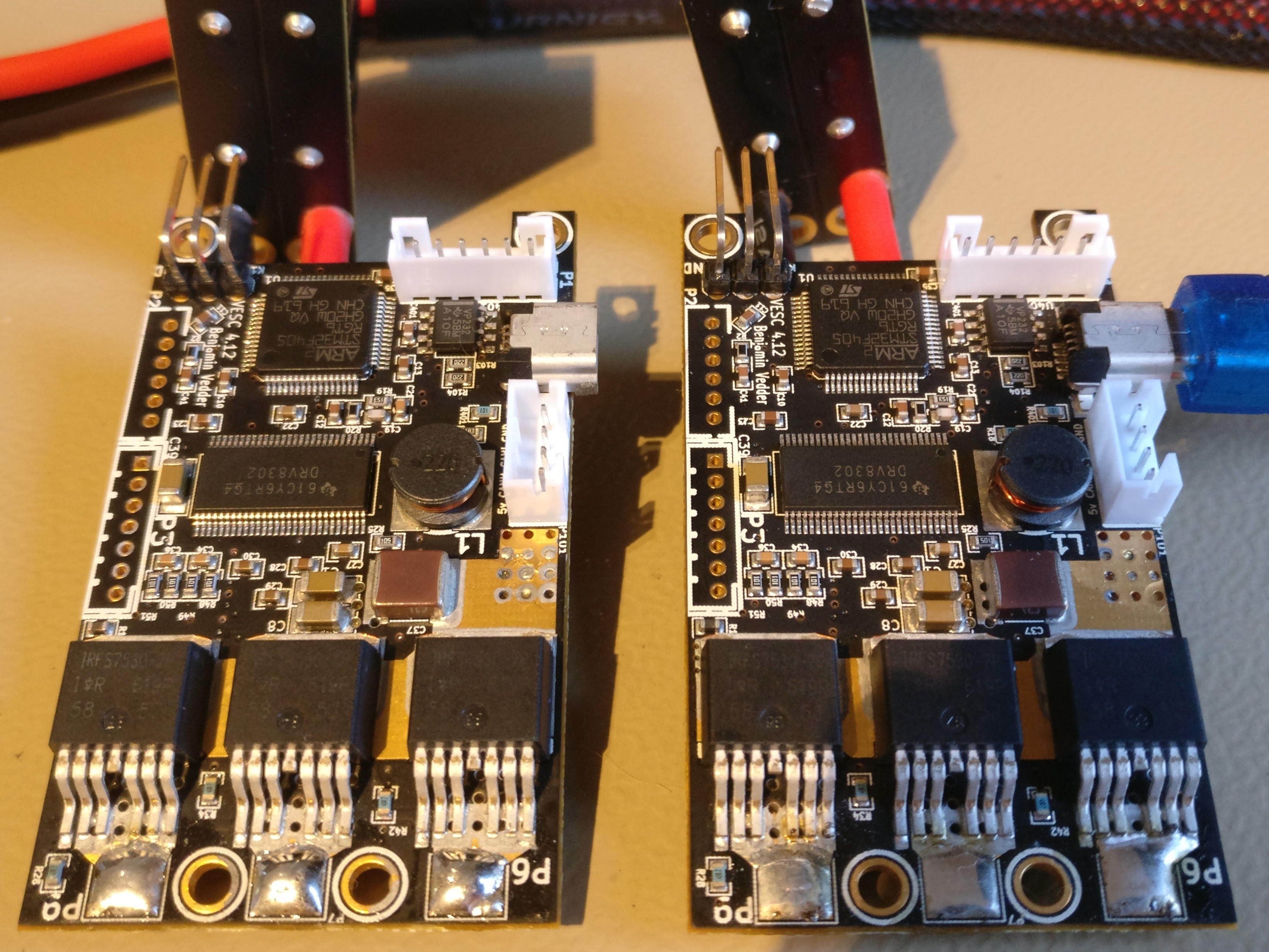 Do you by any chance havce an st link? I assume you/enertion support already checked if you have drivers installed so next step would be to check if the firmware is the problem. Id try to erase the memory and upload a new one.

Make sure you use a USB cable that can transfer data there are a lot of charge only cables only out there.

I continuity checked the usb cable pins all the way from the end to the vesc pcb to be absolutely sure there was no issue with the connector, and I think it should appear in device manager even if there are no drivers.

So I guess the next logical step would be to stlink the shit out of it, too bad I don’t own one yet, so I have to order one and wait for ages. Is there any differences what stick I should get? Funny thing is that they insist they never ship any vesc’s w/o bootloader or firmware.

Hopefully I won’t fk this up.

Just to make sure, when you power it on, nothing happens with the LEDs on the PCB? Except the blue one, that one indicates that the power is on (not that the VESC/MCU is powered on, just that the powerline is present). What is important is if the RED one blinks or if the green one turns on after a few seconds. If not, my educated guess would be firmware is not present at all or not OK in some way, preventing the MCU go through the power on sequence.

Close look at the led’s while powering on, only blue one gets lit. Nothing from the others. But yeah, thanks, I’ll look for some cheap STLinkV2. Sadly we can’t have anything fun locally in Finland.

BTW you should also get the headers for the programming port while you are at it so that you can connect the stlink to the VESCs. 6 pin 1.2mm pitch

Good point, luckily I already had them, seem to be the same connector most small stepper motors have.

Yeah, alternatively you could just solder the wires of the STlink directly to the VESC. Programming it is just a one time thing so it is not too big of a deal. You will need firmware and a bootloader I just uploaded it here. https://drive.google.com/open?id=1E3aSOi57B0740b3ssqJu9Vl-aoNE8pyy The zip contains fw2.54, fw2.18 and a bootloader.

Appreciate the effort, Google Chrome just didn’t allow me to download them. Didn’t personally even think this far yet. But I’ll probably try to find files needed from some more reputable sources.

Got me curious though, does there exist more than one bootloader, and what config tool + firmware combo I should go for?

I am not sure if the bootloader for a V6 is different but I don’t think so. The one in the link is what I flash on customer devices when the bootloader is not present. Same for th firmware it is not a virus I would not do that… Unfortunately I am not able to upload the files directly here on the forum.

The bloc tool is for 2.xx firmwares and vesc tool is for 3.xx Other than that you only need to choose the correct hardware once you are flashing from the bloc tool, in your case it is 4.12

Tried again and it downloaded w/o issues, and the files seem to have same hashes as what I got elsewhere. First time around Chrome literally didn’t allow me to get the file, which was bit worrying.

I assume with Acramaniac mod it’s better to use his tool also?

That’s good to hear, the files there are good t get you started and then update to whatever firmware you like the most via the tool. It was hard to find the bootloader so I wanted to share it so you don’t have to search for too long.

They each have their own tool since the firmwares have different features For both ackmaniacs firmwares there are threads On the forum with download links for the tool. And for the regular firmware you can use enertions tool for the 2.18 and on vesc project there is tool for 3.Xx original (not ackmaniacs firmware).

Got my programmer finally. Memory was indeed empty, so I flashed bootloader. Then had some trouble flashing firmware. Found precompiled .hex by pepperfish with combined bootloader+firmware, used that, then connected with “ACKMANIAC_ESC_TOOL_3_102” and flashed firmware once again with the one that comes in the tool to make proper match.

Have not yet wired these on skateboard, but everything seems fine now. Thank you all.