Hi all, I am trying to make a 6s Parallel charge, 12s series discharge circuit.

I am using this picture off the forum as inspiration: 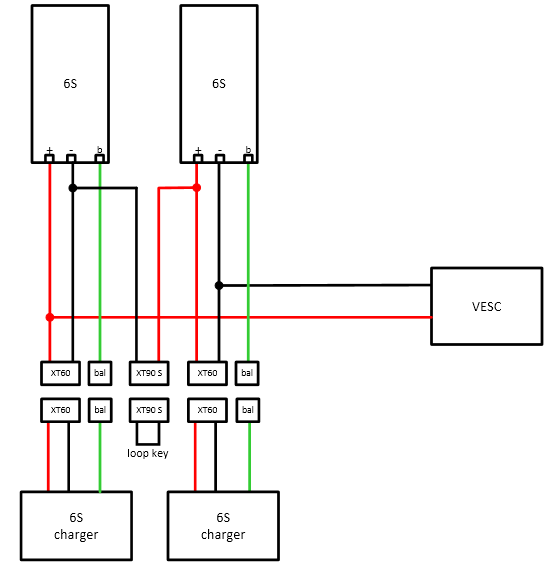 What I want to know is, can I leave my balance lead connected to both batteries (parallelly - is that a word?) and discharge in series?

I don’t want to cause an explosion so thought I would check first!

This will work but there is an easier way. Get a 6s BMS wire it in permanently and use an inexpensive laptop charger

Thanks for the reply mate, I was going to try a bms but I have the charger and the cables so I am going to go with the parallel charging solution for now

Does anybody know if the balance lead can be left connected whilst discharging in series ?

Does anybody know if the balance lead can be left connected whilst discharging in series ?

No, the balance leads cannot be connected in parallel, while discharging in series

What you can do is individually wire each balance lead to a 15-pin VGA connector (so, 2x 6S). Leave the connector disconnected while in series (discharge)… The other side of the VGA connector would be wired to put your 6S leads in parallel (2x 6S to 1x 6S). This way you still only have one balance plug to connect AND they are not permanently hooked up in parallel

I wired it all up, crossed my fingers, winced and…

Thanks for the helps guys !!

Hey I know this is an older post. Are you leaving your balance leads connected in parallel, while you also discharge in series?