Acton Qu4tro could not live up to the hype settling instead for chinese off the shelf components?

What happened with the promised Acton Qu4tro? The board didn’t live to its expectations? Looks now like a complete different board than it was previously advertised. A rip-off? Looks like Acton couldn’t deliver what they promised. Instead they settled for more common cheaper chinese components, similar to those you find in $ 200 - $300 entry-level hub motor electric skateboards.

How come they promised this…

…but instead they delivered this… (??)

probably couldnt keep the price down with original design. and also impractical

Looks like they did a redesign again. Partnering Avenue Trucks for “advanced suspension” The Qu4tro they advertised was a concept design.

I can tell u that avenue truck is dangerous in high speed. it has such high return to center soon as I escape corner it bounce me off the board. Im only using it at front right now.

and as it developed for skateboarding, it has a lot of wiggle room in pivot which makes it in accurate and twitch.

they r developing longboard version but taking long time, prob because of these issue

But this company got money from early birds thru Indiegogo, selling that ‘concept design’… so it was not a concept after all. You read people’s comments and they are pissed for not getting what Acton sold them in the first place.

I backed it. The design changed. It is disappointing but I like those bouncing trucks. I still have faith. As long as they deliver a working product it is ok. I heard stary scammed their backers. Two years already and no delivery. What a nasty thing…

I saw that too. those avenue trucks arnt even for sale yet. looks a bit too try to be futuristic tho. iI want quality deck not the look. I wish they will have option for 2 motors as well

he didnt really show whats inside tho. prob cuz secret?

Looks like patent infringement to me too, Avenue has the patent on the suspension base-plates and last I heard they are not making them or working with Action… …because this is what they promised… 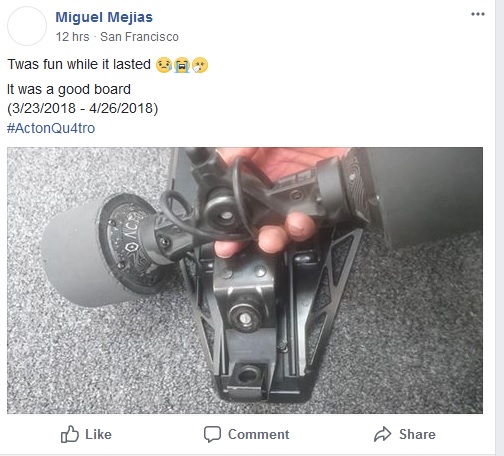 Probably a zero grade kingpin. Do companies really need to cut cost for something so small yet important?!

Even in the initial pictures of the board you can see that they were using these generic hubs from (most likely) DIYeboard. The only thing which was special is the Quattro drive, other than that no better than a Meepo!?

I bought the Qu4tro used off of ebay. Guy I bought it from was an Indigogo backer and got the board that route. I can tell you right now, I love this board. My previous board is a Haloboard and I didn’t think I would ever come across a board that I liked better.

That said however, the guys running that company are friggin’ borderline criminals. I’d love to paste the conversations (and lack of responses) that these guys give. They don’t even read the entire email before responding - when they do respond - and then only give half the information you asked for.

Regarding the suspension trucks…I have both the Avenue longboard trucks as well as the Qu4tro, obviously, trucks. The qu4tro’s trucks are much bigger and much thicker gauge metal. The quality of craftsmanship however is questionable. The two have the same baseplate build, but as I said Actons is much bigger, which is good, at the breakneck speeds the Qu4tro reaches you need nothing less. However, the hangars are night and day different. This is likely how they got around the patent but then again the hangar would have to be different as it’s for an esk8 vs regular longboard.

I emailed Acton to get a price quote for two trucks since replacement parts for the Qu4tro are not posted on their site, I told them that one of mine had broken but I really just wanted to have an extra set on hand in case I ended up like the guy in the pic above, with a broken part and nothing to fix it with. So i get a first response quoting me $30 for the trucks - exact words “trucks”. I then get an email from Acton saying I needed to send in my board so they could do the swapping out of the trucks. I said no thanks, my board isn’t under warranty and I’d rather do it myself.

See what’s coming yet? I strongly suspect due to the way conversations unfold and the way they ignored me for some time that I’m right about this - Since they couldn’t fleece me on the board repair they sent only the baseplate for the truck assembly for $30 each. I emailed them and pointed out that the hangars weren’t with my package and the bullshit I get back is “you mentioned you broke the baseplate” (which I didn’t, I just mentioned I broke the trucks near the kingpin), so right away the person is trying to avoid responsibility for either messing up the shipment, the quote, or suckering me into an expensive repair I can do myself.

In any case went back point by point detailing very accurately why I should have been sent the entire truck assembly and politely as possible, point out the incompetence of their employee by sending me an incomplete part. Oh, when I did ask how much the hangar was going to cost so I could have an entire truck assembly I was quoted $130 per hangar! I knew immediately what this was now about.

Anyways, I think I’ve said enough to make my point. Don’t trust those assholes at Acton, they are criminals doing what they did, misleading, sending incomplete parts, which if I get hurt I’ll be using these emails as evidence in a civil suit - don’t care if I win but as long as they loose a lot of money defending themselves I’ll be able to sleep well knowing they got what they deserve.

I begged and pleaded with them to just do the right thing and win over a customer for life but they decided to ignore me and this is the result, all over what? $260 for two fucking hangars? Really?

Stole from Avenue, Stole from me, I’m sure there are a few others they have intentionally burned…They are not good people and they do not run a good company. They do not deserve your hard earned money.

[Hey Acton, if you are reading this, do you still feel good about your decision? If even one person decides not to purchase a board from you - even though neither of us will ever know - you loose significantly more money than you would have made if you’ve just done the right thing and sell me the entire truck assembly (like I asked) from the get go. I hope it was worth it]

Now to end this on a positive note: The Acton Qu4tro is one sick ass electric longboard. The 4 motors are just immensely strong, they have massive power, start and stop on a dime, and barely get warm to the touch when you are going full tilt boogie, solid, for a long ways, even in the summer time in Phoenix. The aluminum frame is not flexible at all but at the speeds this thing gets to, you don’t want flex or anything that will induce high speed wobbles - that can quickly ruin your day, as well as your beautiful mug…Other than being outrageously heavy, the board is flawless. I love it. Wouldn’t trade it for a Boosted or an Evolve anytime.

Board hard my friends!