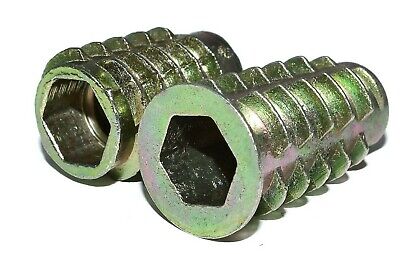 Holes won’t got through the deck

using screws is cheap way of mounting your enclosure. You could do some sort of latching mechanism but not sure if it gives away from vibrations, I think screws are the safest way.

If you look at enertion or any other decent esk8 makers they all either do screws or custom made locking mechanisms which might be hard to replicate on DIY basis. Holes won’t got through the deck

How many mm difference are needed between length of inserts and board thickness? Also if your insert is 8mm you pre-drill 9mm deep? I’ve read several times that you get often bumps on top of the deck, I wanna avoid that. I have such thread inserts with 8mm length but the width of my 14 ply urban carver is 9,8mm!! I consider if I shall try it without drilling through the deck which I would prefer, but I’m afraid it won’t work. Any thoughts?

Yeah, I have 10mm deck and the shortest inserts I could find were 10 mm also. I drilled 8 mm hole and have inserts sticking out a bit, but since it is covered with enclosure it doesn’t bother me as it isn’t visible. I have one insert which I drilled too deep and now there is a slight bump on the top of the deck. Not huge issue

I rather have that than screws through the deck.

I have also purchased some wood filler as I had to redo two holes, hole wasn’t deep enough and when I screwed insets in it popped right out.

At The moment I’m happy with the set up, it works well, just need to be Careful when drilling

Make sure you have drill stopper on, it helps to not drill through

Make sure you have drill stopper on, it helps to not drill through

My drill stopper usually is masking tape on the drill

but I have to buy such thing, nice tip! So the bump is only when you drill the insert to deep if I understand it correctly. I’ll try to drill 8.5 to 9mm deep to avoid that with my 8mm inserts, thanks!

I saw some builds where they strapped the enclosure with belts to the deck but I wouldn’t do that. I think screws are still the safest way if you don’t want to loose something while riding. What type of enclosure do you have? Picture please! Also has your bamboo deck much flex? In case you have a long enclosure this could be a problem

I always have some spare screws and hex key in my pocket - just in case I loose some from vibrations. It hasn’t happened yet and I have over 10 km on the clock;)

Maybe use a bit thread locker

On my MTB i’ve mounted the top box with 4 screws. On my first ride I lost 2 of them and the remaining 2 were almost lost

. I added thread locker and it never came loose again. The top cover is mounted with 8 screws and I often loose 1 or 2 of them during riding… so I have many spare parts, I would say a full workshop in my backpack.

Haha Mr Gadget! I don’t use threadlocker as I often take enclosure off to inspect stuff etc. My board is still in Beta version

If u use rubber washers it helps

How about 3M Duallock strips ? Rock solid support and actually VERY difficult to unlock. No piercing needed, just put the tape on and voilà. You got other “weaker” strips which could still do the job for your enclosure and keep it straight even under vibrations or after hitting sidewalks underneath.

I have set of Velcro by Velcro ( not a clone) . I use it to hold batteries, vesc and bms attached to the board so it doesn’t rattle inside. Holds very well but for enclosure I rather use screws

just to be safe

My enclosure is ± 0.6m long, deck isn’t very flexible, also I heve 2 brackets under the deck to mount batteries on them (it makes deck even stiffer) Not bad idea, I use Dial “hook and loop tape” (same thing) for my batteries

I know what you’re talking about. Once my driving wheel passed by and i had to brake with the motor mount