Looks like they are 97mm with a proprietary hub. I know we all want 107’s or above, but these things light up! I don’t like Kickstarter, anymore, but I still might back this.

What are your thoughts?

I think they will boardfeel like any Labeda clear thane (good) and the battery-less system, if manufactured properly, should prove reliable.

Woah dude I’ve been wanting something like this ever since leifboard announced them. I’m gonna get a set for sure.

Looks like they are marketing towards Evolve and Boosted (smart, since they can get a lot of buyers this way). For us that means both ABEC and Kegel cores, hopefully, unless they have proprietary pulleys they ship with.

Yeah, looks interesting. I didn’t see any mention of size, duro, or contact patch though. Kinda important if they want to market a wheel.

I actually had the opportunity at the Evolve World Cup to speak with the gentleman who came up with these. The cores are his own design and they do come with the pulleys. 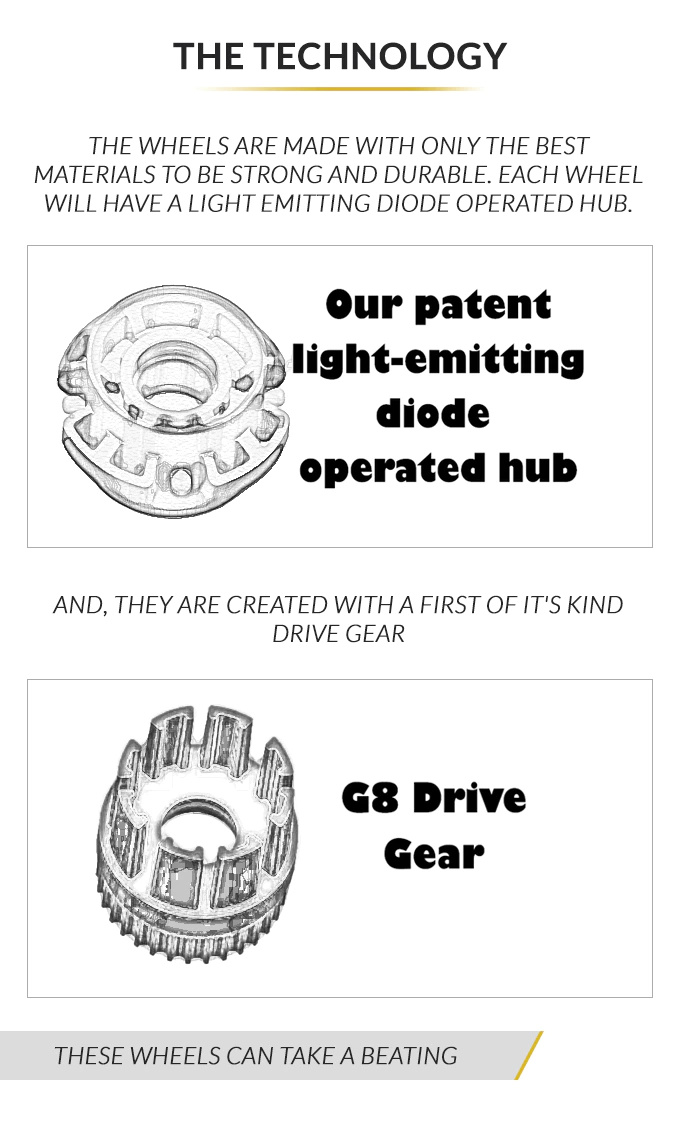 I agree. I think he mentioned that they were 78a and 97mm. I believe they are, basically, clone 97’s with lights.

Ah, That’s not bad, but before I buy them it’d be cool if they did the same thing that Boa did and send a few samples to some of the people on here to review. Also a proprietary gear kinda sucks considering the esk8 market is already divided between kegel and abec. Still interested though.

I’ll try it for sure I ride alot at night and the more visible I am the better. You can’t miss these Tron wheels haha

Also, How many teeth are the drive gear. I assume 36?

I’m pretty sure they are 32 tooth for the evolve and what ever comes standard on Boosted.

You’ll lose a decent amount of torque though. 36 should really be the smallest gear on 97’s. I run the evolve 38T on my Boa’s and I think that’s perfect.

the esk8 market is already divided between kegel and abec

In a way yes, the sk8 market is split between Evolve and Boosted users, neither of which really feature here and we make up a pretty small percentage. Any company with marketing savvy would send samples to those companies and seek alliances.

Kind of reminds me of my sons shoes when he was 3 years old that lit up when he walked. Cool idea. @Battosaii tron build is a great idea you gotta do it.

These are really interesting. I would pick up a set, but like @thiswasandy said its mainly for production boards and not DIY. Their pulley and flywheel hub have 8 “slots” while genuine flywheels only have 6. That leaves us locked in to 1 pulley directly from them and wont fit most of our setups.

Unless I make a special hub adapter for them

I’m sure we could measure them out and make our own. This one might fit: https://www.thingiverse.com/thing:1003206

the only thing different here is that the wheel has flywheel style core and is 97mm, why does it cost so much more than the literally thousands of led wheels on ebay that go for 16 bucks?

Maybe because they are not mass produced yet? Not sure,