Beware of motors with this common design

Damn dude, that’s a lot of broken mounts. Do you ride cobblestone streets? what kind of trucks are you running? I’m tempted to send you one of my mounts just to see if it can survive the gauntlet

Are you going to replace those motors with same or go to a different brand? In looking back at the photos you originally posted that is a badly designed bell.

Is the bell replaceable or are the motors toast?

i just ran through MayTech’s catalog… those are totally maytech OEM motors. They’ll do a lot of things for you at the 10-20 qty range and they’ll do even more for you at the 100+ quantity range. I’ve spoken with them in the past about OEMing motors from them. A LOT of people do this because they will do laser etching of your design into the can, keyways, snap ring grooves, color anodize, hall sensors, just about everything, and they’ll do just about everything but color anodize in short runs.

Yup a lot of broken mounts frustration and wasted time!! That’s only like half of them

I ride everything NYC has to offer. Not too much cobblestone though. They are caliber v2 trucks. I do ride very hard, strong acceleration and braking. I would be down to test your mount.

I’m going to go with a different brand I think. most of the parts are easily replaceable except the part that broke. the motors are totally fine but with the mounting plates reduced strength and only 3 screw holes left to use, I think i have to get new motors.

Even Tacon and Rspec has that endbell…Never happened to me or anyone I ride with.

I’m thinking it has to do with something else entirely.

Overtorquing all of your hardware? Do you use loctite yet rather than just leaning into your wrench?

Ever since your mount broke i have been careful not to over torque anything and i always use loctite as stated above.

Maybe tight belt i was thinking also. but my other motor (sk3) is running same tightness and nothing happen to it. NYC has the shittiest streets ever so it could be that. I don’t really ride on cobblestone. Never any contact with the road as i could tell by not seeing any scuff marks on the motor.
Maybe a manufacture defect. They are the same manufacture of TB motors and zboard and metroboard. They did have other defects in previous motors i got from them. like cir-clips that wouldn’t stay on and wrong length bell that kept moving…

Either way i would expect the motors and motor mounts to be strong enough to handle all these conditions. They should be way stronger than we need. Not just strong enough to hold under ideal conditions. The clear weak point is the thin metal where the screw is and it is a common enough problem (under some hard conditions) since it happened twice in exact same location.

Pretty good chance my mount will fail under your conditions, but I’m interested enough to send you one - what is the distance center to center of your bolt pattern?

The design of mine is exactly the opposite - I went with softer aluminum so it can flex a little bit under stress. That might save the bell, but could also be prone to belt skip under harsh acceleration and braking. I use chain drive so I don’t have that issue.

I have the standard holes like TB motors. If its compatible send it over to be destroyed lol jk maybe it will survive

NOTE: The video’s audio is out of sync

So I finally uploaded the video of the motor destruction. Now as you may remember our video file got corrupted and we have only manage to recover 90% of the video. However the audio is out of sync.

So here it is! 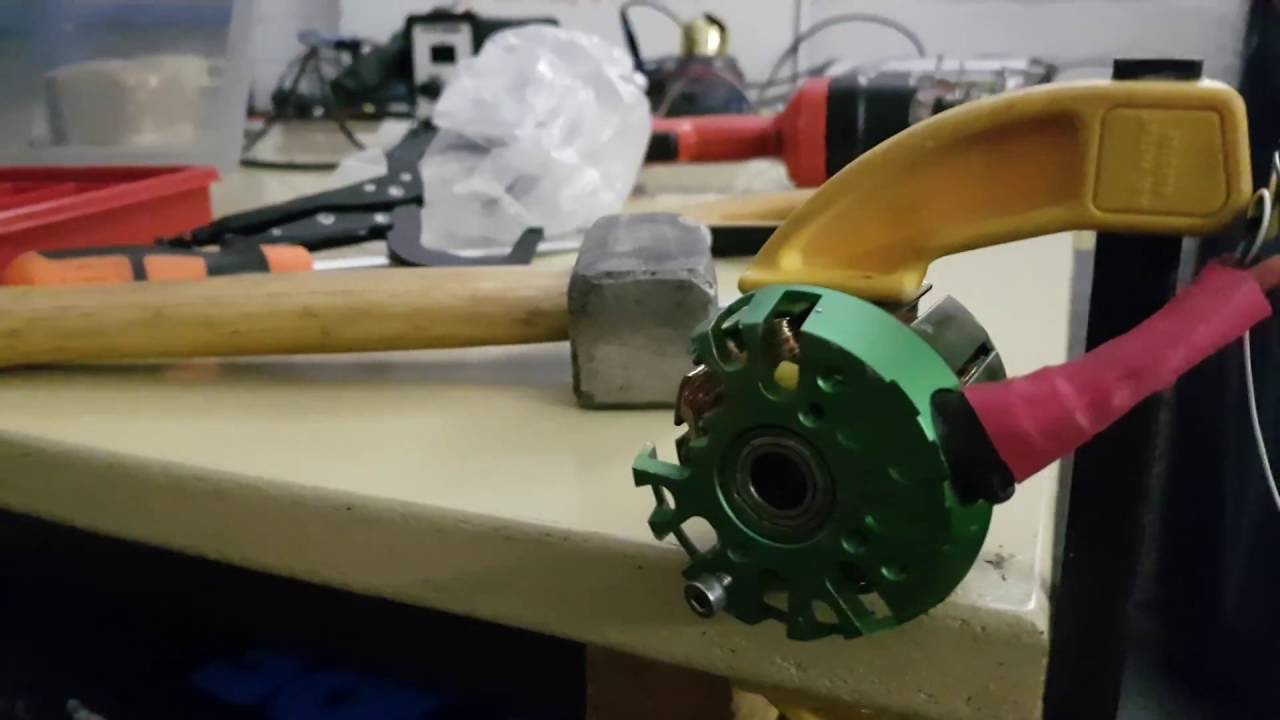 It’s sad I could not sync the audio. Hope you will like it guys!

Guys… get a vise for gods sake! Also, another thing that hasn’t been mentioned is plastic thermal stress, that can cause thin aluminium castings to become brittle. Also @Mikeomania12 could you post a closeup of the broken part and the area where it snapped, it would be good to see if there’s any pores in the casting.

Thank you. Almost every motor i’ve ever used has that bell design and none of them have ever broken that way. In fact the only damage i’ve ever seen to a motor is yanked out phase leads.

This kind of damage has to be the result of special circumstances and i’d love to know what they are. Or it is the result of a bad batch of motors with shitty aluminum.

Trust me…The Santa Ana riverbed has a blend of anything NYC could throw at a board and we ride our boards there all the time.

The difference is that you guys in Cali go to places to skate where pavement like NYC, we ride to places that are like Cali’s endless run of the mill smooth streets! ha ha ha!

Ok sorry been super busy this weekend, @ccostel thanks for the video and your test to break it. I think you should screw it to a mount and then try to pull it off.

@chinzw I dont know about thermal stress since the motor never gets hot. But view the close up below. New updates are that I have broken a third motor with a similar design from the same manufacturer. Im getting a better idea of what causes this since i was able to brake this motor in just a few rides. First common issue with these 3 motors out of the box, they make a weird screeching (that isnt the normal one) while braking very hard. sounds like magnets rubbing the stator for a short time till i lay off the brakes. So i decided to keep doing this and short stop more often. The sound was constantly only during strong braking. Then the next day i realized that the place where its usually breaks is becoming uneven/bent a little. Next day I had to short stop on some cobblestone. (which i rarely ever ride on since i’ve memorized all the newly paved streets) Then I checked the motor to see if it survived. Sure enough the piece was completely broken now.

My theory is that under hard braking with low gearing and strong vibrations and tight enough belt is enough to bend the motor “can” so that its magnets rub the stator and make a weird noise. This constant bending and pulling on the motor as well as the weight of this heavy motor being pulled towards the ground during vibrations will eventually fatigue the weakest point being the motor cap that hold the motor to the mount. It need to be stronger since this part is the only thing attaching the motor to the mount and must withstand all these forces.

I don’t see any air pockets in the casting, but it doesn’t look great either. I’d suggest in your case it might be worth looking for a billet machined motor since the cost might be higher, but it wont break like that every other day.

Is your mount reversed? It looks like the motor mount plate is on the wrong side of the truck clamp plate, and your belt and pulley are pushed out to the end of the motor shaft. That extra leverage on the motor shaft could be causing extra stress on the motors inner mounting hole causing it to snap.

Yes, its reversed. I couldn’t push the mount in more to make room for the 15mm belt.

Yes, the pulley is pretty far out. But other motors have even longer shafts. It could be an issue combined with everything else already stated .

Who manufactured those Motors ?,what company ?

Are they Maytech Motors?