I’m finally posting my build after procrastinating on it for weeks. This is by far my most ambitious (and expensive) build yet.

Pictures (please excuse the poor photography): First, here are some pictures of the build in its finished/almost finished state. Some of the photos are from when I still had my TB 6355s mounted. 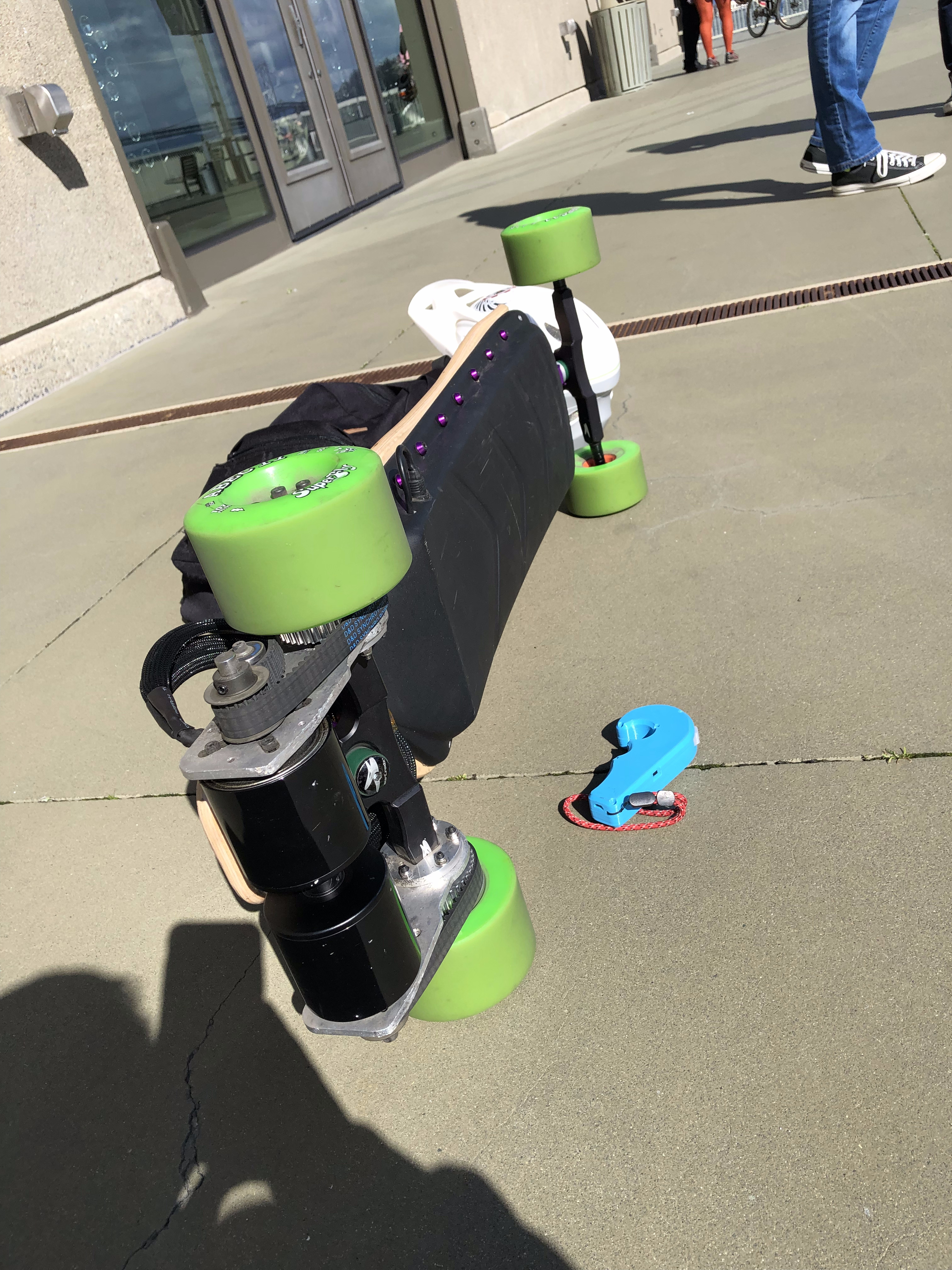 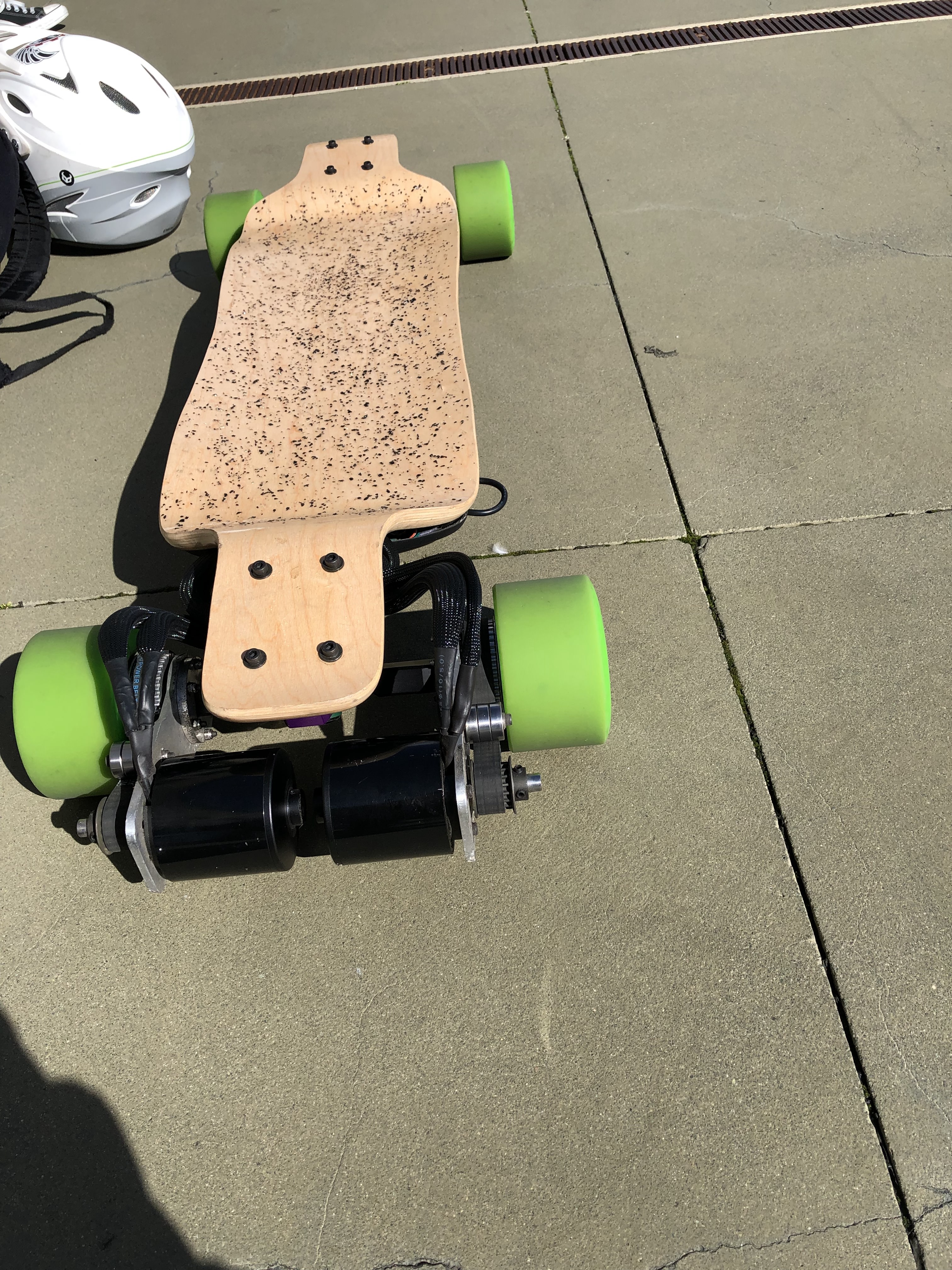 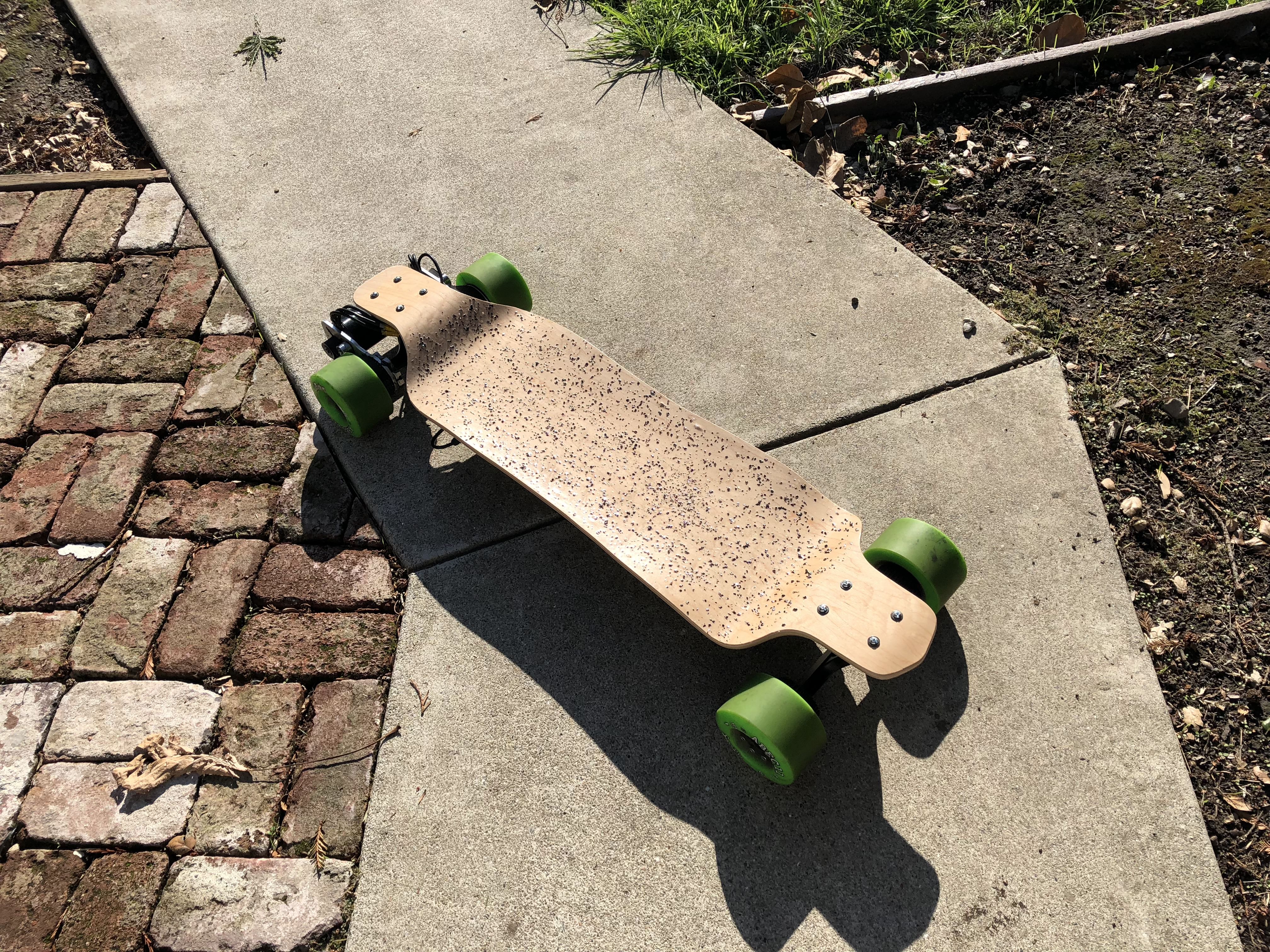 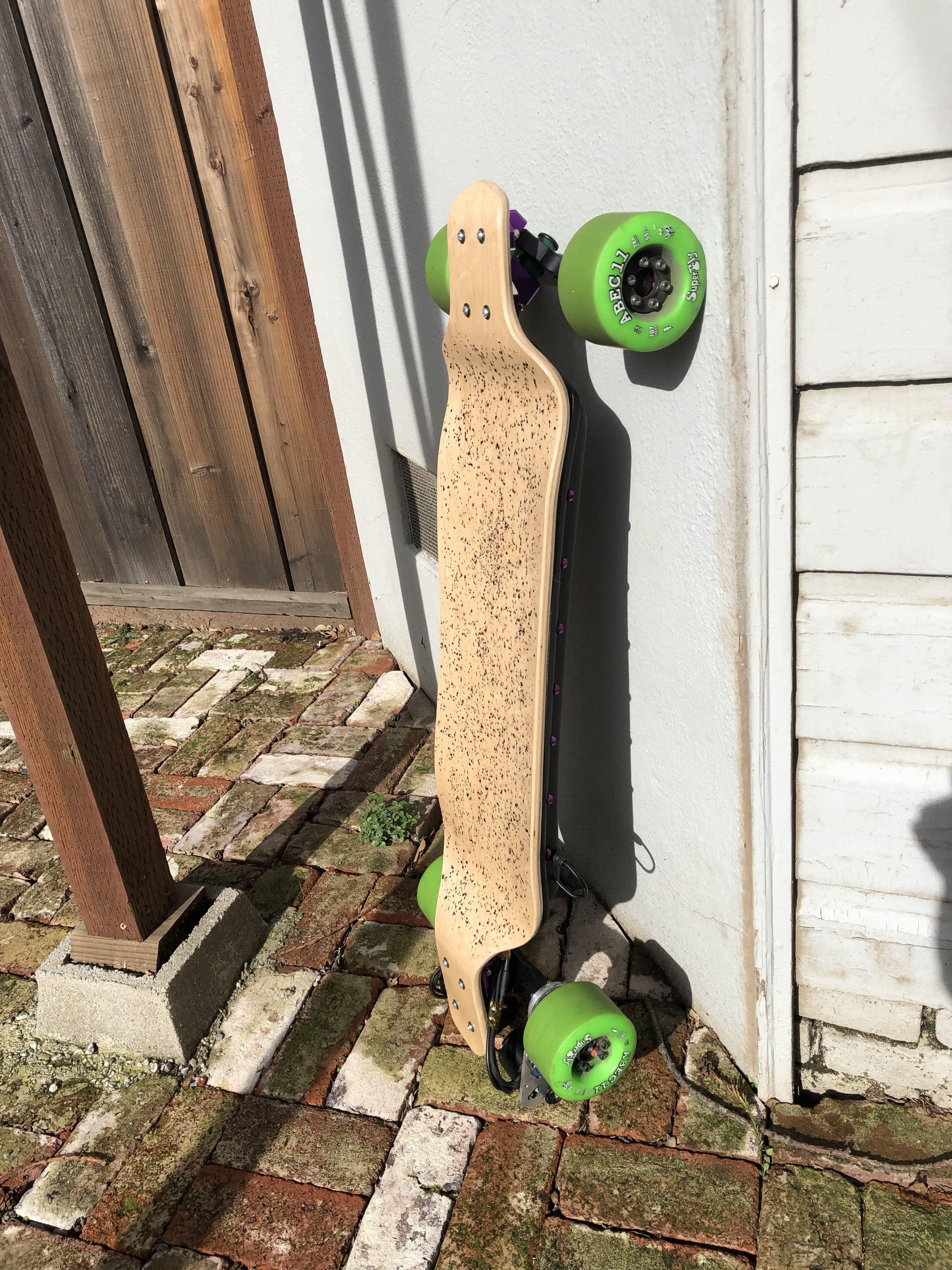 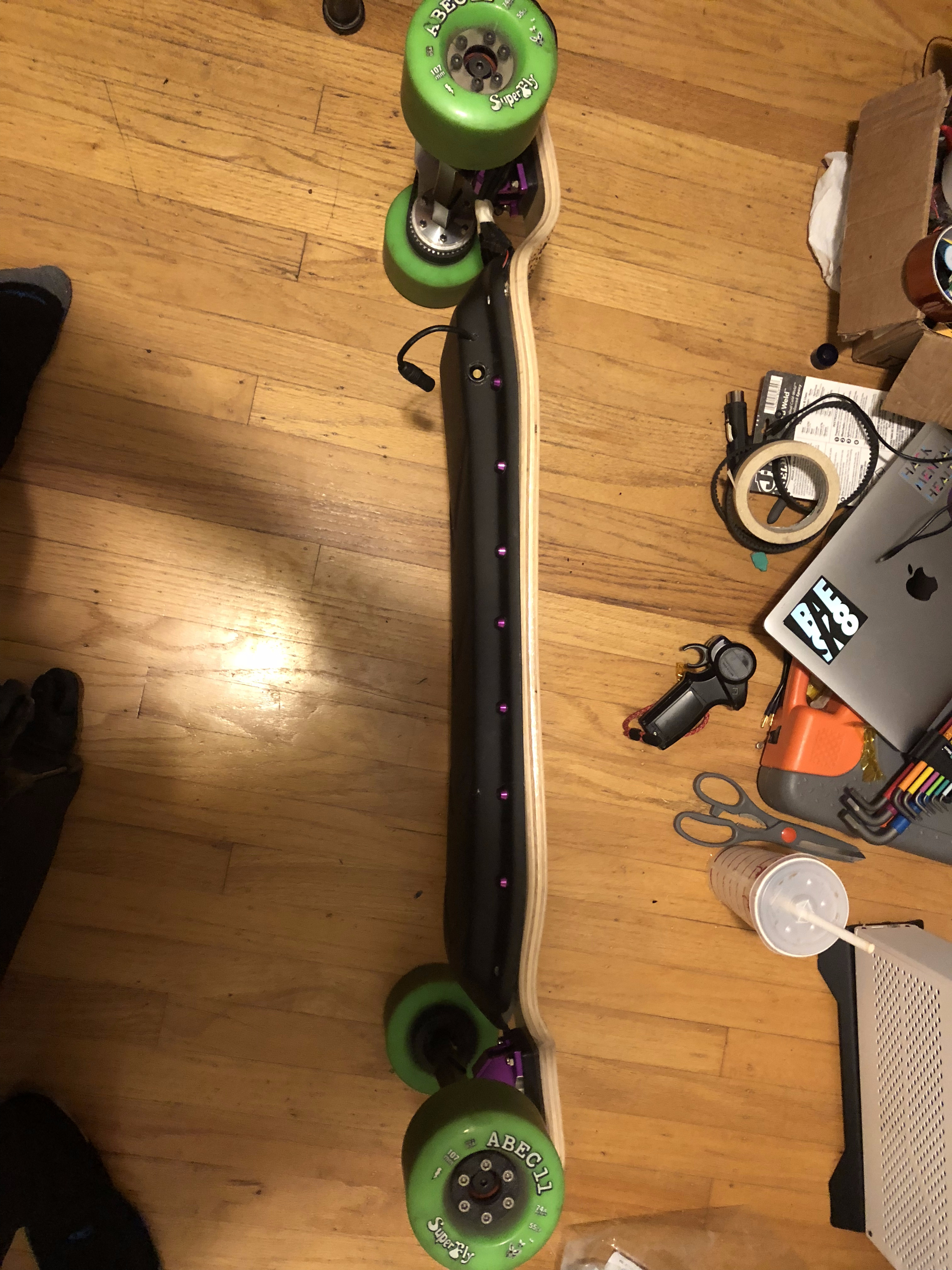 Here is the enclosure and everything inside. 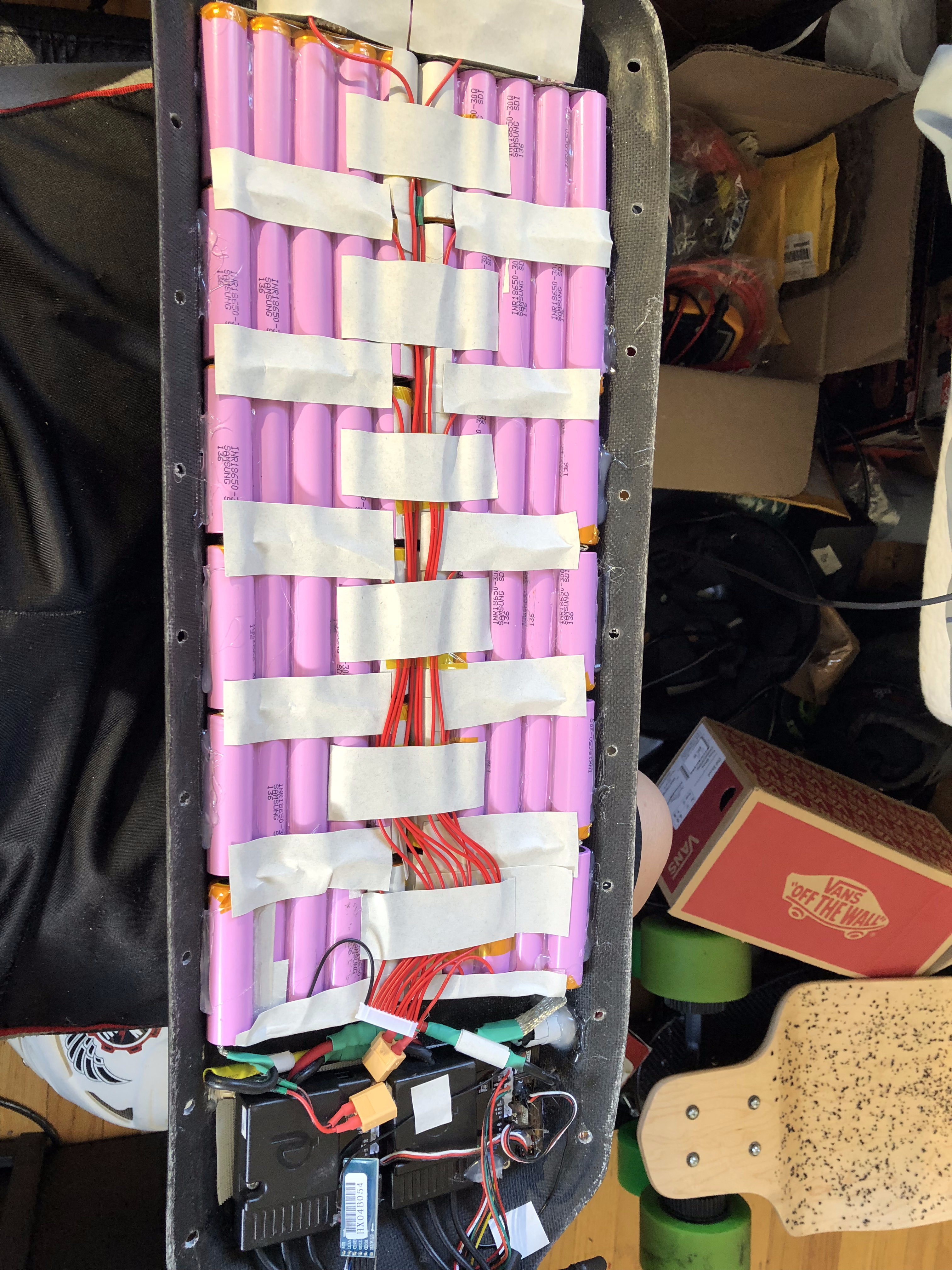 Closeup of the wiring between battery and focboxes 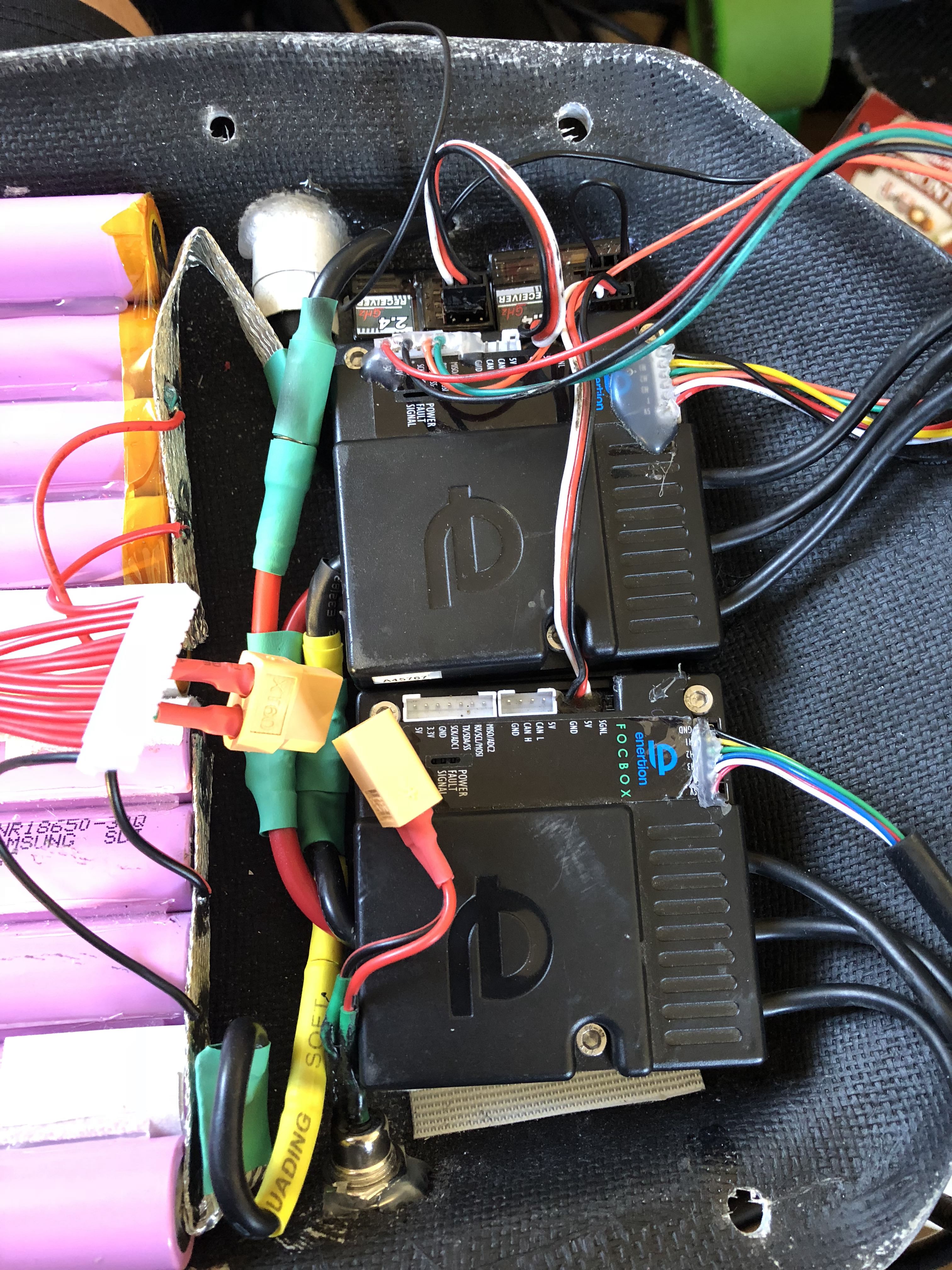 P groups are connected by tinned copper braid. The battery P groups aren’t all flat, the 5th cell in each group had to be raised due to the shape of the enclosure. Also, the 7th P group was split up near the nose of the enclosure, with 2 pairs and 1 single cell soldered in parallel. I used fish paper to insulate those cells from any exposed braids, and there is no risk of shorting in that area bar any catastrophic failures. I also used fishpaper anywhere else it could be needed. 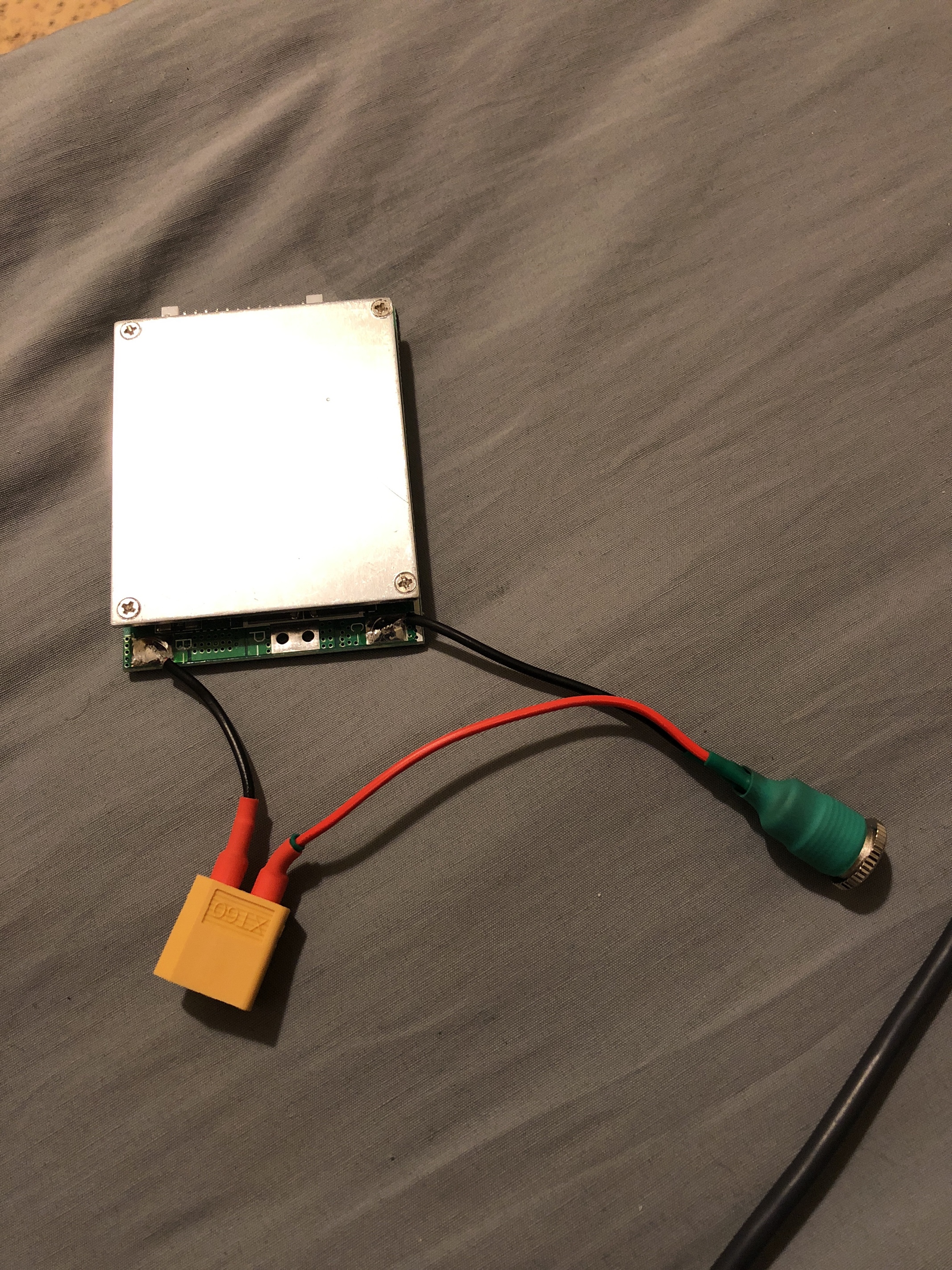 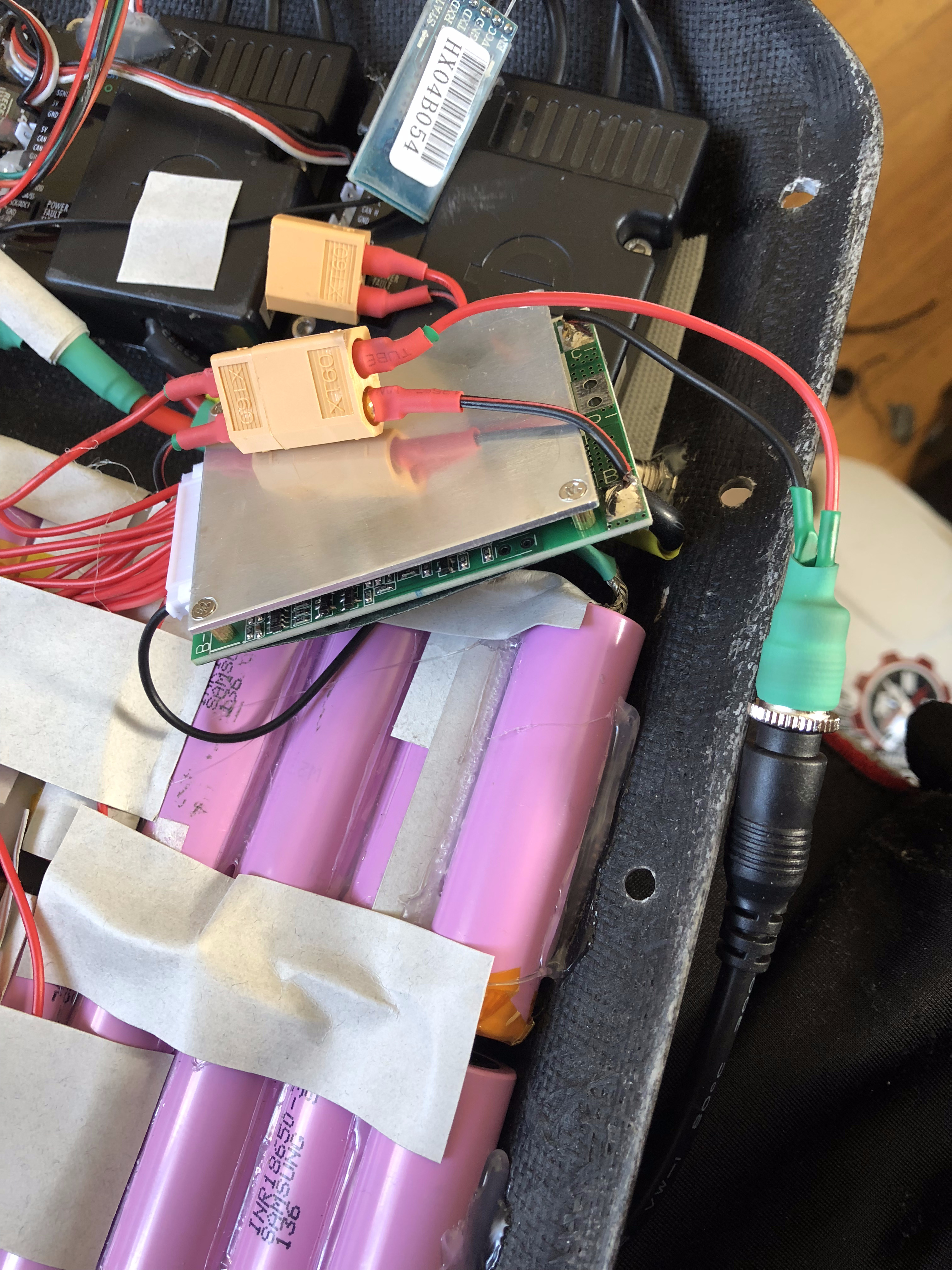 You might also notice that I don’t have a BMS in the enclosure. In order to save space, I had to make a number of sacrifices:

A few things to note:

A few things I would definitely do differently if possible

Those Subsonic builds are truly beautiful, congrats on such a nice build.

Post more pictures of the board sitting on the floor

METRIC SKATE HARDARE (m5 screws). Honestly, this is the best thing I’ve ever done, now I don’t have to use any freedom unit tools when messing with this damn thing. Every screw on this board is now metric.

What a build! What kind of speed are you getting on that beast? Guess you can’t tell because no bluetooth module

I was also wondering why you opted for 2 receivers over a canbus wire. What are the benefits?

I hit 37mph on the 6355s with a little throttle left, we’ll see what I can hit on the 6880s. I haven’t tried to max the speed on those yet, due to a lack of trying. I think it will be similar

As for the 2 receivers, I did that so that one vesc blowing wouldn’t potentially cripple the other which is a possibility on canbus. I do lose traction control, but I haven’t had any traction issues yet. I’m running 13s so blowing a vesc a real possibility.

edit: I do have a bluetooth module

Beautiful build! What is the process of the glass frit for the deck?

All I did was put on a coat of this stuff, sprinkle some medium glass frit on, then applied a few more coats of urethane over the next 10 hours or so. You can touch it up with the same process if it wears off, and you can also use fine glass frit if the medium is a little too chunky for you. @longhairedboy has some more in depth tutorials if you wanna take a look at them.

Here’s a picture I had on my phone of the underside, showing off the enclosure you made for me 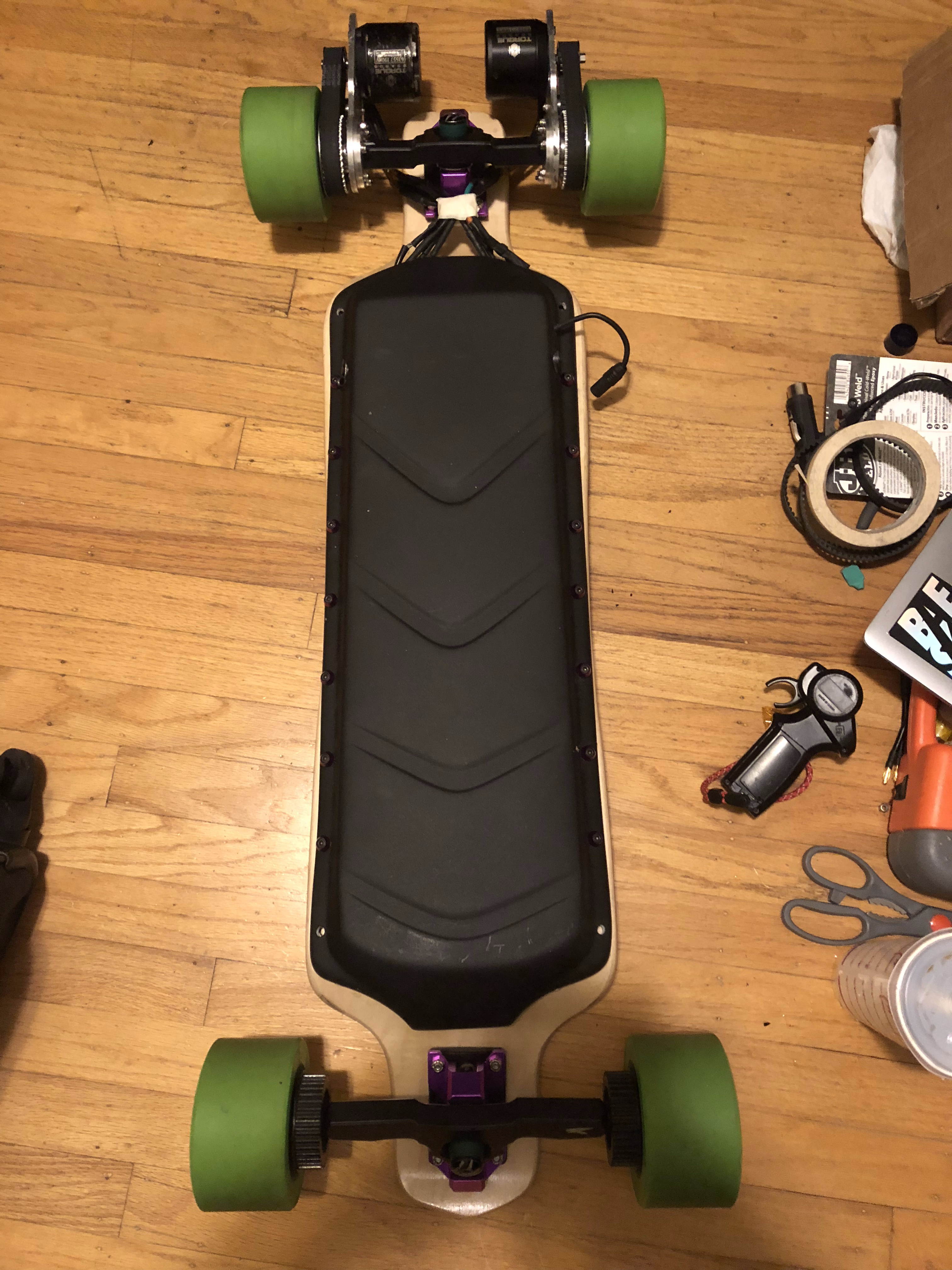 Thanks! I’ll give it a try

i use both gloss and semi gloss, it just depends on the rest of the aesthetic. On black out stealth boards i even use matte to minimize reflections. and sometimes i do spot finishes where the whle board is matte and the section i want to pop is gloss.

Took it out for a ride today, it performed admirably. 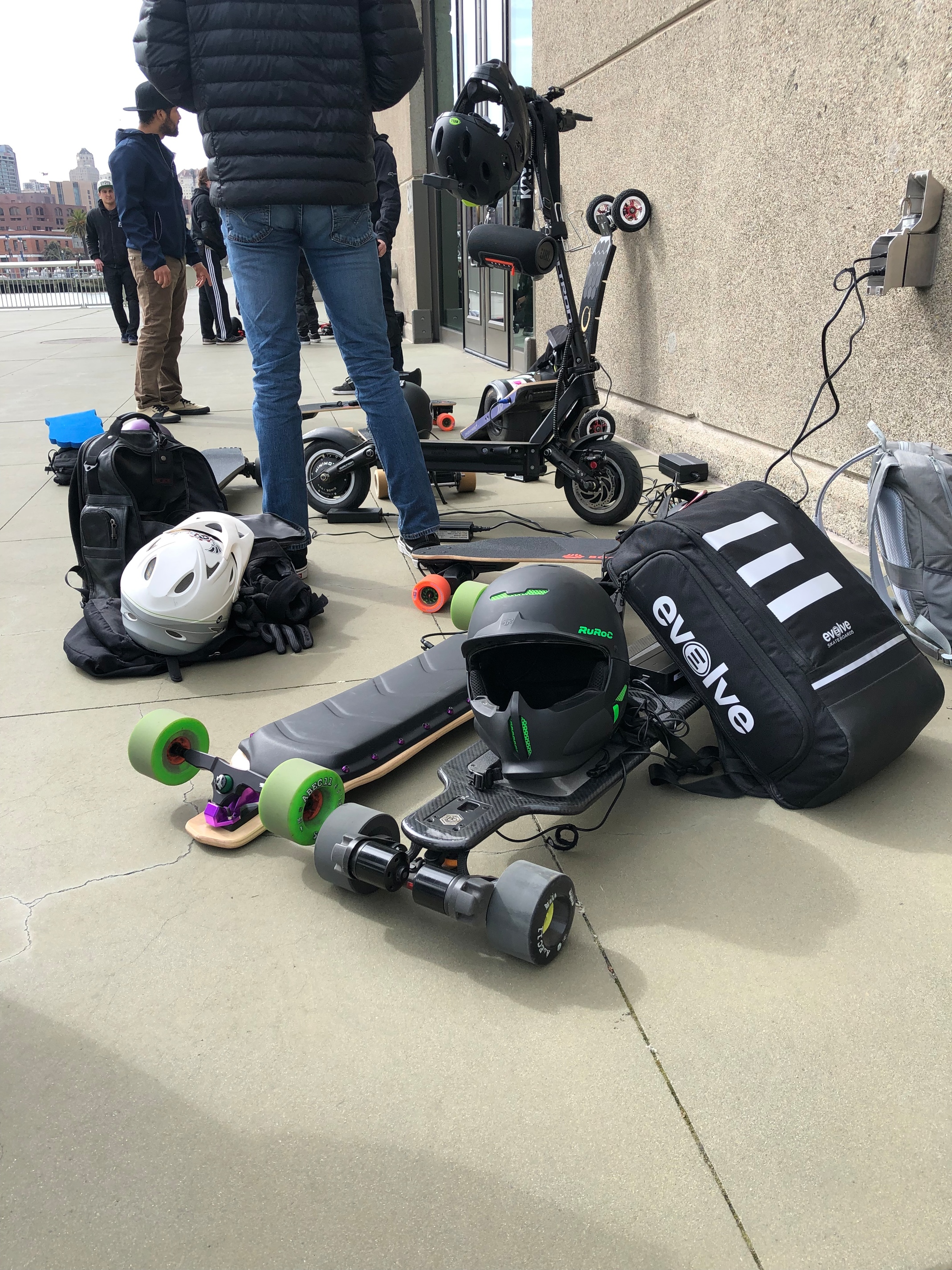 I have issues with either the Bluetooth module or the app I use, so I couldn’t track my speed. But based on those around me I hit about 35mph. I found myself wanting more speed so I may move to 36t pulleys.

Turns out 107s don’t save you from absolutely everything

Helmet and pads💪 will save your ass

This is insane. Well done!

Absolutely beautiful… One question how is the grip with glass frit compare to a normal grip tape? I am also thinking in using it but not sure if it will be kinda slippery.

This steel shhet they use to cover roads under constructions are super scary.

It seems to be pretty grippy. I think it would be even grippier if I used some fine grit glass frit as well. Once I add some finer glass I’ll update you!

Do you use epoxy to seal it?

I will look for it, is it real transparent or change a bit the colour? Maybe it’s easier to find it local than epoxy. Thx.