It all started about a year ago, as I lurked on these forums. Got really serious about building an eboard around 10 months ago. Research, research and more research was the name of the game. Definitely thought this was overwhelming at first, but had to learn it in stages, which made it all manageable.

I tried my hardest to learn as much as possible before I started asking questions to folks such as @mmaner, @GunnarK, @Battosaii . Gents, thank you for putting up with a noob and his questions. You did help in every manner with either responses, detailed builds and/or videos.

Because of Mmaner, it then lead me to vendors. This rabbit hole of purchasing includes @JLabs, @torqueboards, Brad from Riptide and @hyperIon1. All standup business that are fantastic in what they do!

Very special thanks to the vendors. Thanks again Jared with your awesome customer service and amazon type shipping! Dexter has been very helpful from the beginning, as I purchased some products from him as well. Brad, thanks a ton with your help on bushings, lord knows it has made a huge difference. A very special thanks to Cory from Hyperion that has helped me with my battery purchase and being an all around fantastic guy that really provides top notch customer service. At the end of the build I bounced many ideas off him as well as he provided me the opportunity to test out products for him. Great guy and I highly recommend anything from him, as well as Jared and Dexter. Nothing but greatness from these gentlemen!

Now on to the build. I am saying this is my first true build. I have put together boards, like DIYeboards and shit like that, which really doesn’t count to me. Anyway, one thing I realized from a DIY build is things just don’t go to plan, at least for me. I actually started with this board 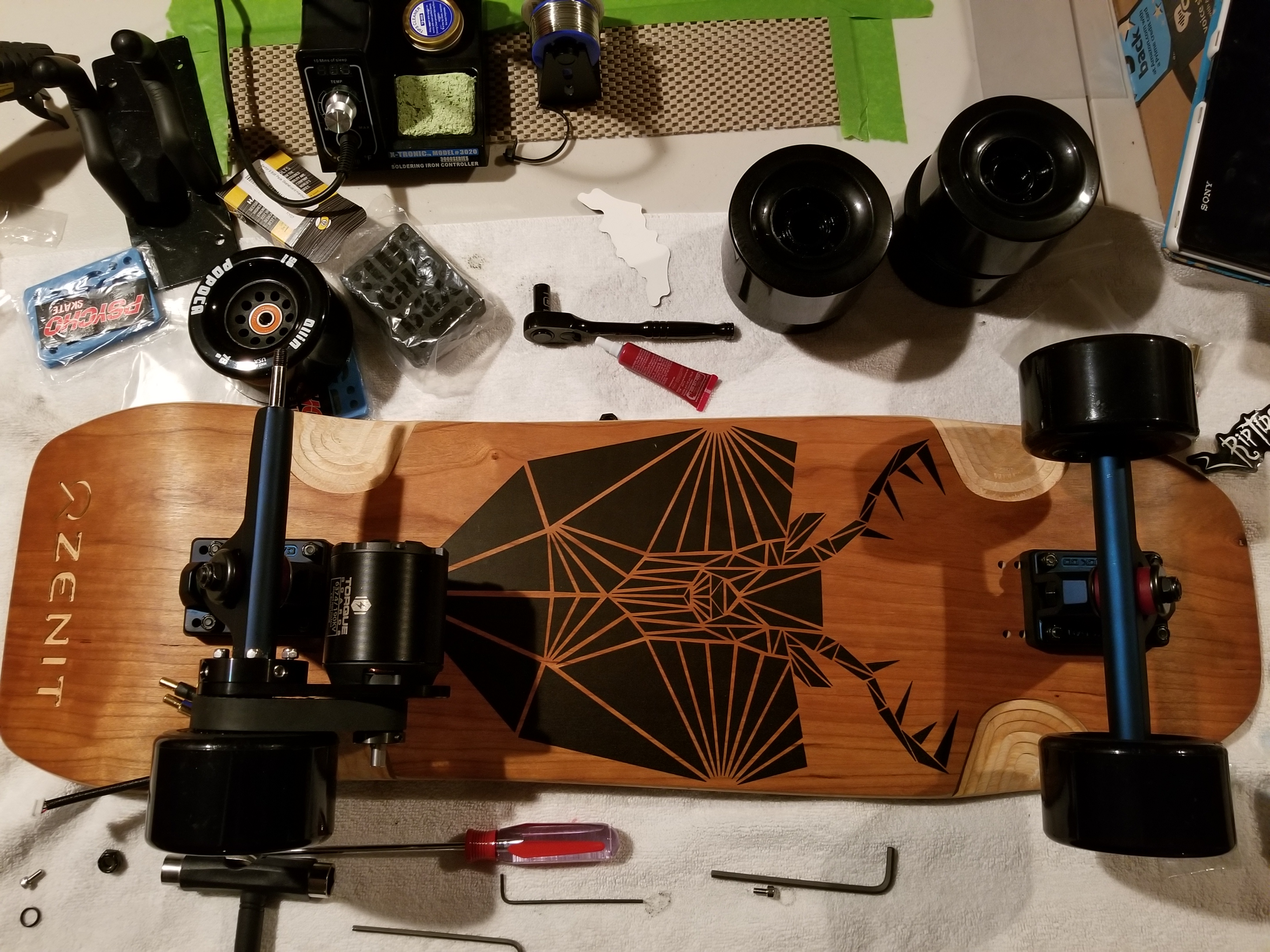 A compact build, but my goodness was I ever off with my measurements. Screwed up the entire thing when I emailed Cory for the battery build. Didn’t want to go the lipo route since I needed Lipo charger, alarms, and wasn’t sure how vigilant I would be with a lipo pack. Tell you the truth, I was worried about the cons I was reading on the forums. Granted now, I know more and wouldn’t mind trying out a lipo build. But still need the additional accessories before going down that route. The only option was reverse mount, but that defeated the purpose on a kicktail board…

I was so pissed at myself, I had to go outside on the deck with a Capt Gold and Coke, hell even sparked up a cigar. As I contemplated beating the shit out of my heavy bag, board, I then thought…Why the hell not buy my buddies broken chinese board. He told me he would sell it cheap for parts. It was a shitty amazon Chinese Blitz hub board crap. Anyway, I told him my issue and he said, dude give me a 6 pack of Guiness and it is yours. And that is how we ended up with this 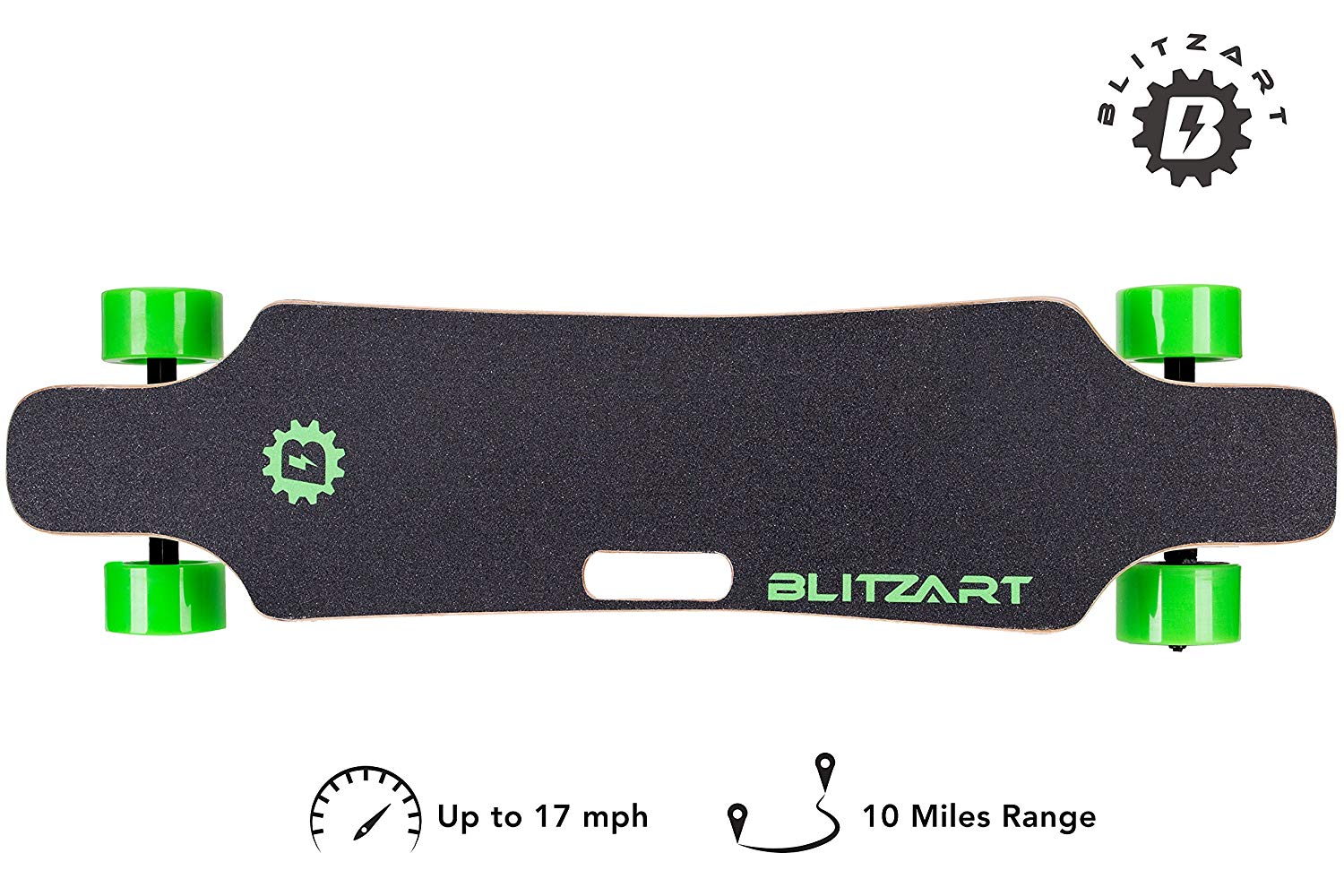 At this point I had bought my Caliber’s 44/50, TB 6374, TB VESC, TB mounts, Popoca’s, Jlabs 97mm clones, BT Metr, mini remote and BMS. I was ready, but then had to figure out an enclosure. I then thought, hell since I am so far behind the schedule let me be a true DIYer and come up with a good enclosure. As that thought process was going on, I then started to really dislike the handle in the board. Which lead me to think, why not epoxy that crap, then sand it down, paint the deck and make it my own! Yup… I then thought, it would of been easier to buy a damn deck. Well, then shit, it was a challenge and might as well take it on. At this point, I guess I wanted to see what I was even capable of doing.

Epoxy researched, ordered… shipped and delivered. As that was going on, I did my research on here and the University of Youtube. Being rather intimidated with the process of handling epoxy for the first time, I was reluctant, but went for it. The results on the first covering of epoxy on the board. 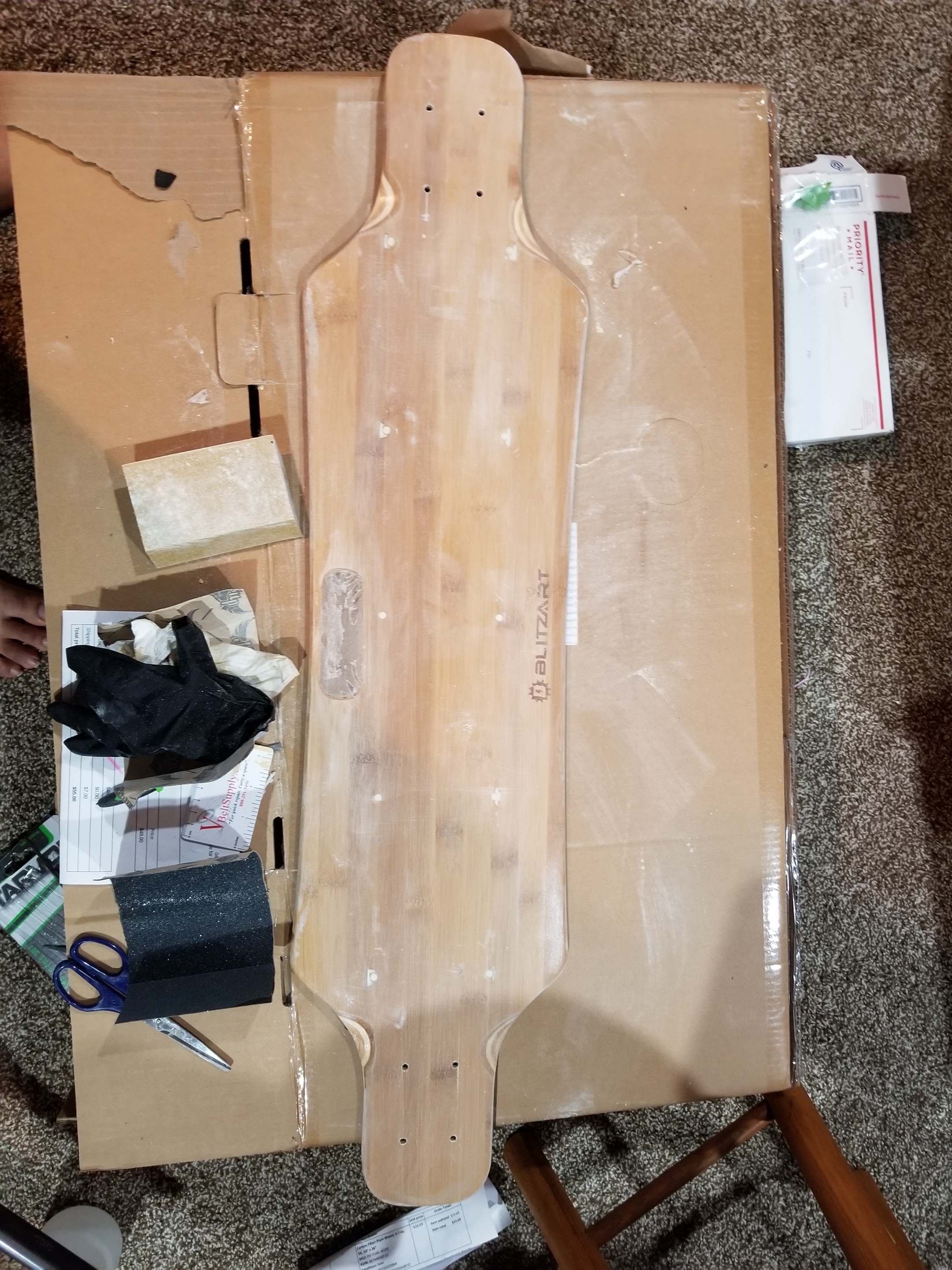 After more passes of sanding, I finally reached a point I was content with the progress. Then came the 10s battery built by Cory/Ben at Hyperion.

So then came the painting. The color was chosen mostly because I liked it from when I had to spray paint a few storage shelves for my wife. This made up my mind and then the painting began. 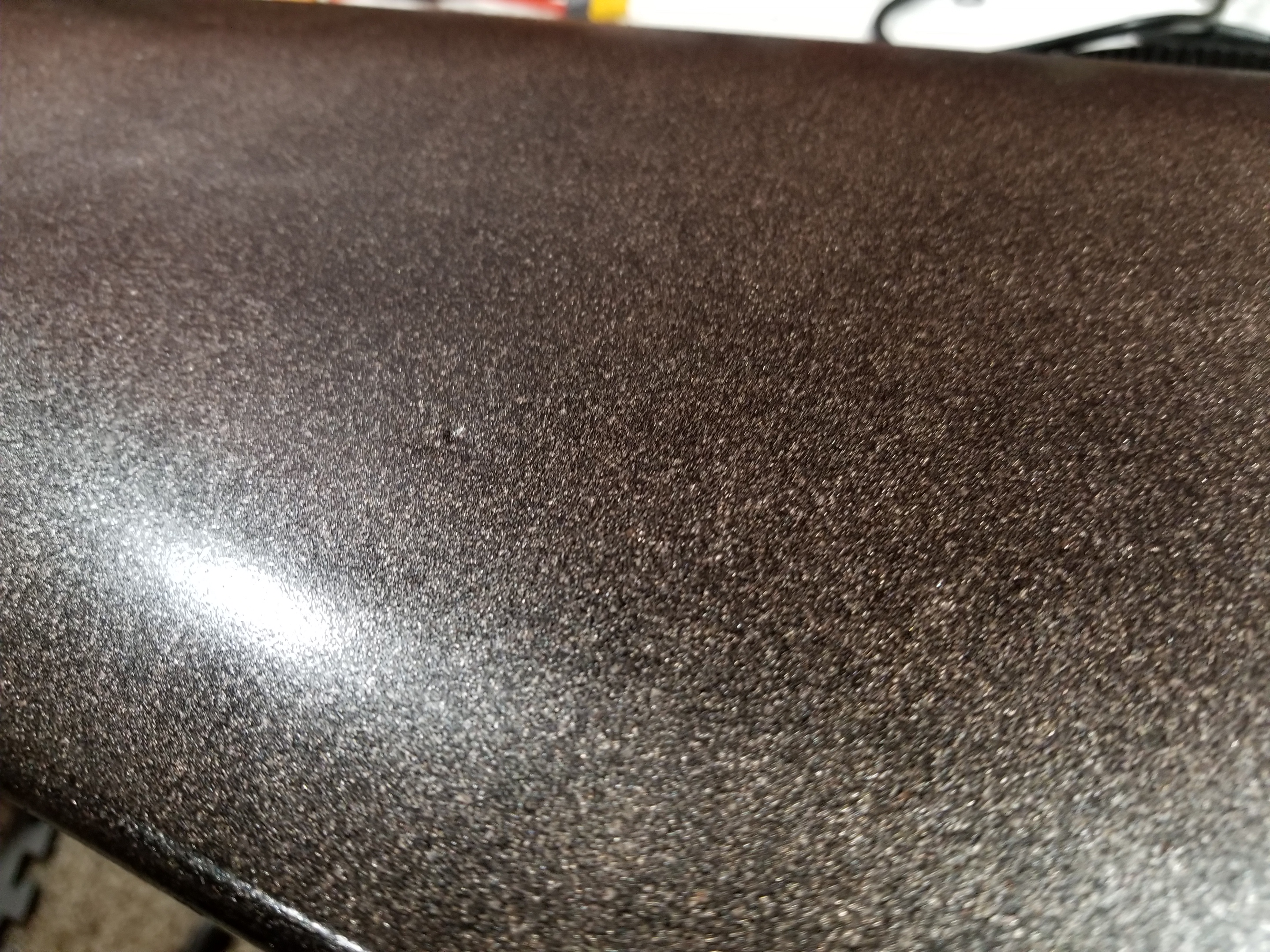 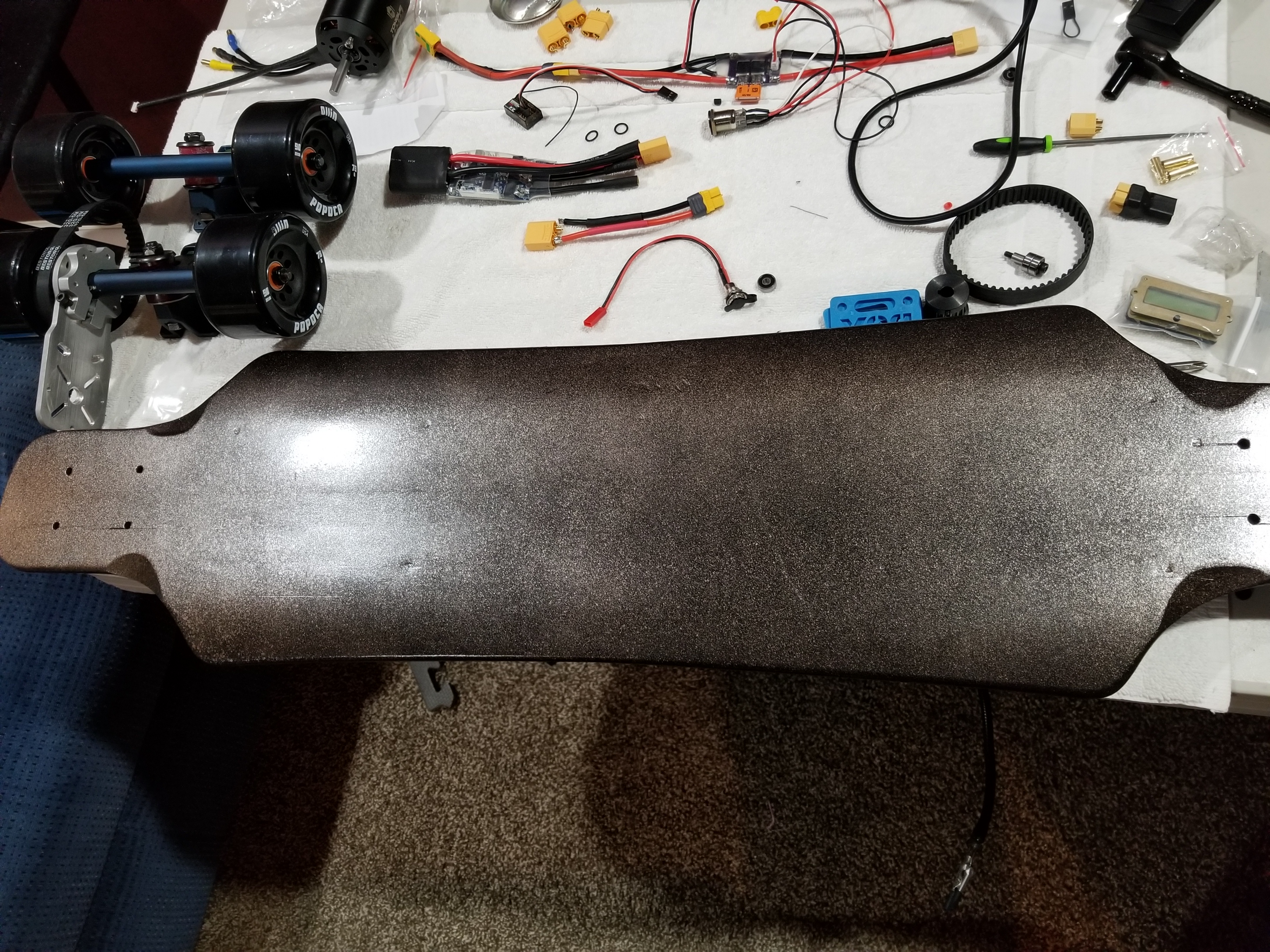 Now I was getting excited…what a horrible mistake that was. When I get excited, I get confident… when I get confident, dumb shit happens. That dumb shit now became the idea that I can wrap the planter tray in carbon. Oh I forgot to mention, I bought a planter tray. It was actually really solid, and not flimsy like most trays. It was a hard plastic and about 18-20" long if I recall correctly. Yeah, that then lead my fingers to ebay for carbon fiber. I blame you all for making carbon fiber wrapping look easy as hell.

Twenty-five days later from China, my wrap comes. Thank goodness. By this time I think I started ordering used parts on the forum as well as new mounts from marcmt88. I read and watch one more youtube video about wrapping, and I started in on it! Yeah, I realized that you only need to pour as much as you are going to use in a short period. Damn that shit can dry quickly when you finish a coat, LOL! My dumb ass wasted about 4 ounces of epoxy… Capt and Coke break!

After I composed myself, I noticed my coat was just too thick and shitty. Sanding was forever, I was yet again pissed. The heavy bag got the business that afternoon. I then read some more and watched more videos. I ripped the carbon off and started again. With the ever so enlightening trail and error, the second round was much better. I will say, I didn’t take as much time sanding and sanding for around 6 coats, but I did 3 coats and called it a day. With a newborn I was lucky I even got 1 damn coat. Those three coats took a week as just never had time. I had pics of this process but don’t know where the hell I did with them on my phone.

Let’s fast forward. Using Ackmaniac’s tool, I set up the board with rather conservative settings with the TB VESC. I then changed with the FLIPSKY VESC6(Thanks Cory) and tried that bad boy out for the first run. First values were 40,-40, 40, -8. Used some velcro to strap the enclosure and went for a run. Brakes were a joke, and I needed more speed. So the final values are now 60, -60, 40, -12. Brakes are solid, great speed, especially with the throttle curve set and just that sense of accomplishment. FINALLY!!! DAMN, 20 Cap/Cokes, 5 cigars, about 6 months of roadblocks and restarts, and the birth of my beautfiul newborn daughter later…and I finally finished. 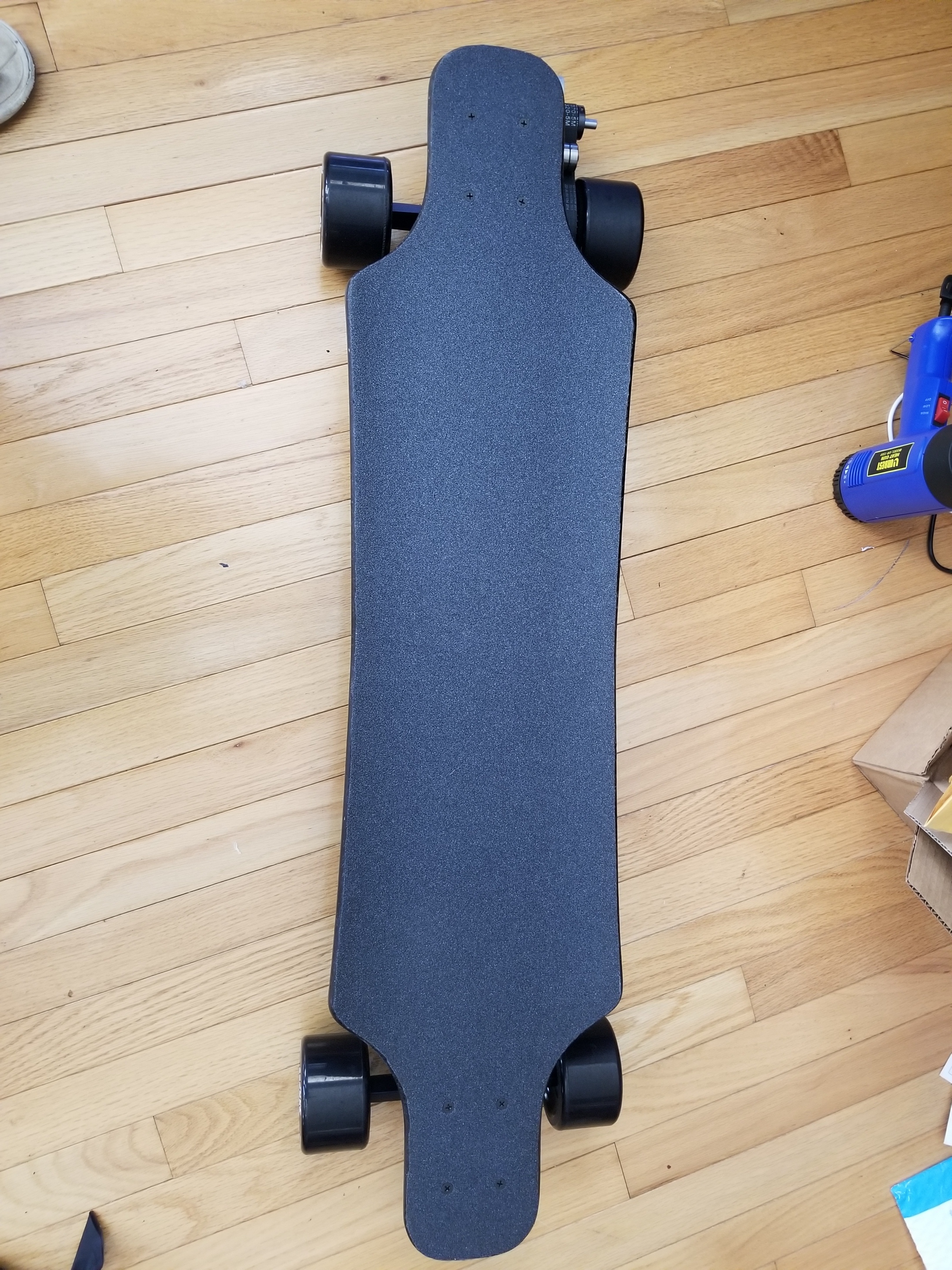 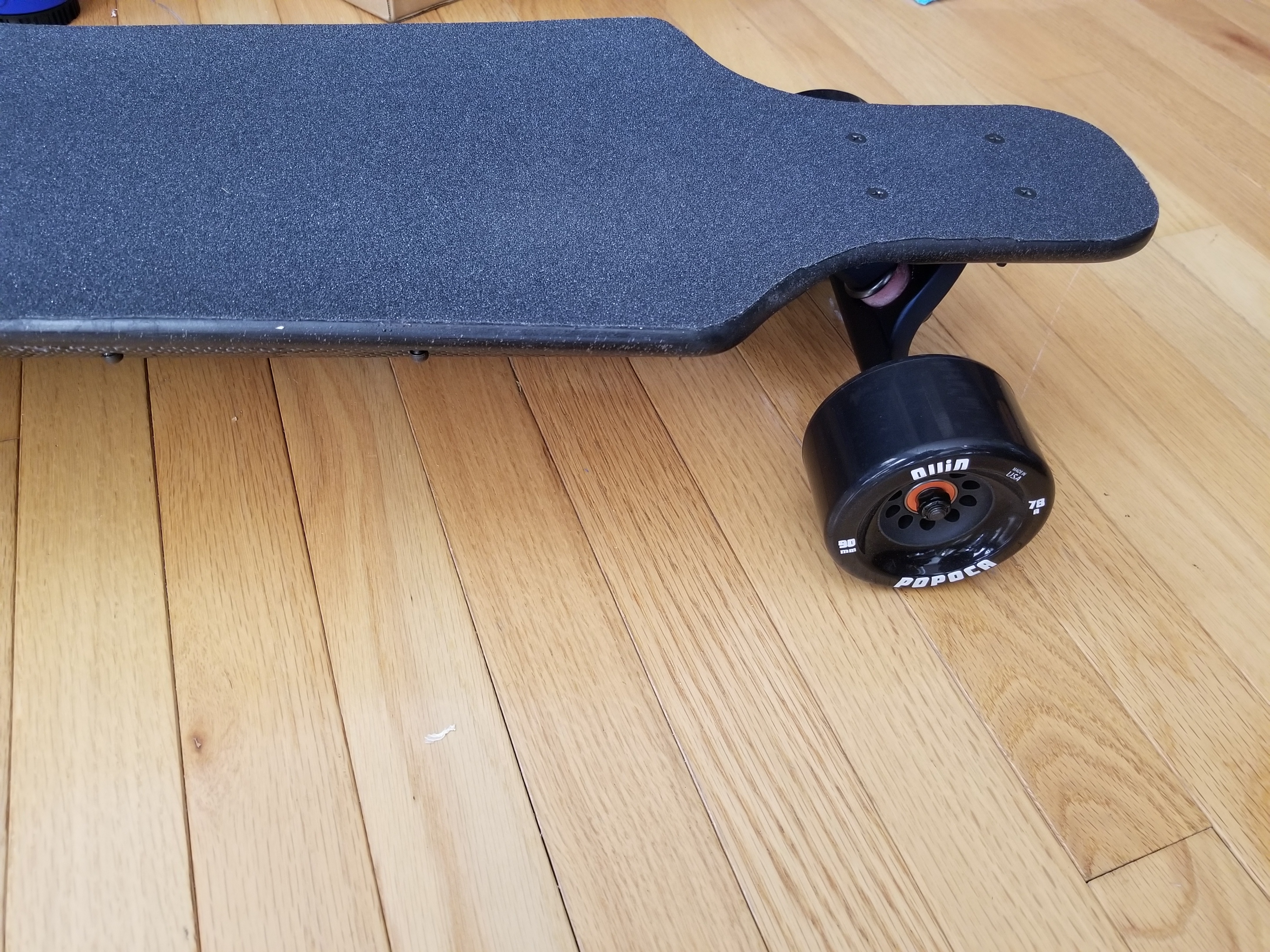 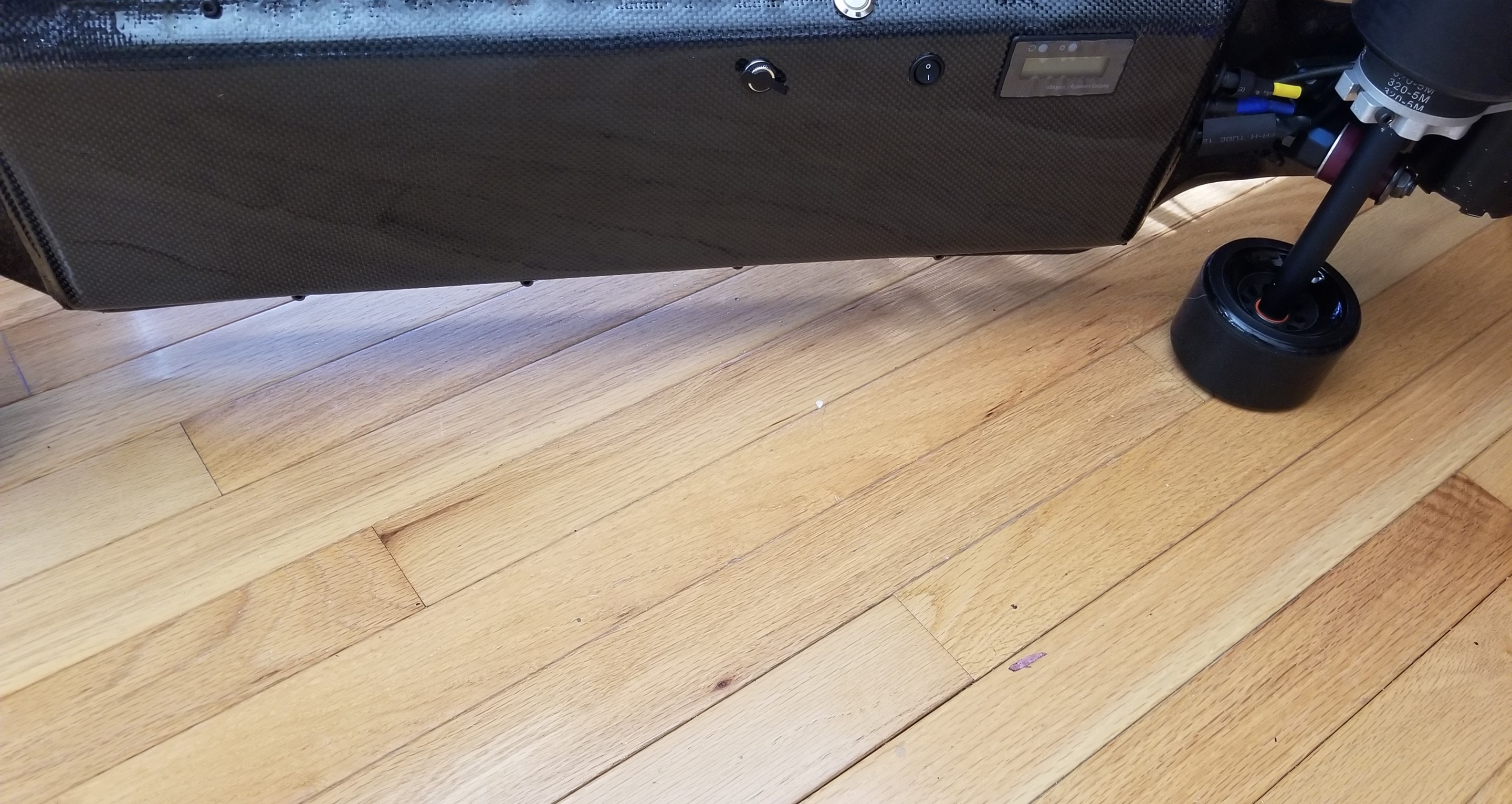 I have better pics, but I am at work and this is all I have at the moment. Also, I am in the process of changing the trucks to white Caliber’s, thanks @Sender.

Learned A LOT. Taking this new found knowledge to build my next board which will be a dual 12s4p Arbor 6355 setup. With either Boa’s, TB110’s(when they come out), or ABEC 107’s. The best thing is that this build is moving along much smoother and faster than this last one, THANK GOD! Once I get some money, I will finish it up and be ready to post. Going to actually have some fun with this next one and have much better quality of work. Anyway, thanks again for all the amazing folks that have helped me on this new found journey. It was fun to try something new and succeed. Definitely not the quality build I have seen many folks on here create, but it is pretty nice and a lot better than it should of been with all the issues I ran into!

Loved the run through. It’s truly a process. Loled at the cap b and cokes. So much frustration. So worth it. I have a really young kid. Watching him try to learn to walk right now. Reminds me so much of learning to build your own esk8. So frustrating but hey, anything worth learning is not gonna be easy. Build looks great, exited to hear how she runs. We’re so lucky to have this forum and the helpful leaders and vendors that add value everyday. Keep learning!

Hahaha thanks man!! Kinda wanted to put ppl in my state of mind during the build. I absolutely agree it is all worth it at the end.

Actually being the northern vs area the only issue I am having as of late is that it seems like every damn day it is raining. Can’t stand this!! Might get a run tonight but who knows.

The board is solid. Actually rather impressed at how the flip sky is holding up. Only issue I had was running it once in NC a month ago in high temps, high humidity climbing a hill… The Vesc did not like that. Kind of stuttered. Which made me get off and wait a few minutes as I rode back to the house avg around 15mph…Sadly my BT wasn’t working properly, really wanted to see the temps during that climb.

Besides that I run the board hard… And I’m 6ft around 200lbs. Soo not a light guy. Built like a running back whom is pushing his 40s riding with a TSG helmet without a care in the world lmao. I have had some good ride time with the FLIPSKY in case anyone wants to know about it.

Great build @mixedcreation! That enclosure looks awesome from what I can see. Looking forward to some new pics

Glad I could help you building this monster

Greetings from the Netherlands (where we REALLY need some rain)

I’d be happy to pass some of this shit off to you! I really would like to ride, but damn thunderstorms and flash floods every other day is ruining my fun!

I will get some more up to date pics!

You can keep the rest. We got a bit of rain today. We good