I am starting my second build and I thought I would post all my progress here.

goals for this build:

Heres what I have so far: Hello everyone! This is my first post on eSk8 though ive been reading stuff on here for a while now. A couple months ago I wanted a new switch for my board other than my crap-a-tronic fuse switch that was falling apart. So I looked some up and saw a...

entirely waterproof, I want to be able to ride it through pouring rain and puddles (anyone have tips for waterproofing?

Maybe some adhesive rubber between the enclosure and board? Also try some silicone as extra protection.

Build sounds awesome and that’s a beautiful deck you got there! I don’t have many tips of waterproofing other than, THATS A GREAT IDEA cause I’ve had numerous problems with water corroding contacts and messing with other things.

I just bought this fuse today from autozone, its 80 amps and it says its rated for 32 volts, but I read numerous things online that said they will work with higher voltages (I will have a max of 36 volts) Has anybody tried these fuses, I will probably solder the blades to a connector to attach it. Why not get a fuse holder?. Fuses trip by heat, so I imagine putting a soldering iron to it may trip the fuse if heated up for too long.

Yeah like @Jinra said definelty get a fuse holder, I got some cheap one at AutoZone that works really well for a different project of mine. Also I think an 80A fuse might be a little overkill, I think a 50-60A would work just fine. Oh and with fuses voltage definelty doesn’t matter as long as your not exceeding it by a ton, what matters is amperage, that’s why people like using 12S2P for example not 6S6P because they need less current from the higher voltage battery.

Maybe this could help with the water resistance

Maybe this can help your eboard in some wet situations: NEVERWET

It has some drawbacks but i think it can help.

Good point @Jinra and @JdogAwesome I will check autozone for a fuse holder.

Also will try neverwet for the pcb in whatever remote I get. As for the board, I would like to seal it off completely because I don’t want to take the heat shrink off my vesc and spray it.

Update: I just hooked up the sensors on my OM5065 to the Vesc. There is definitely less cogging when I hold the motor still with my hand on my desk.

The only major parts I need to buy now are a remote and a BMS. Having trouble finding a BMS for 10s LiFe.

I plan on milling my own motor mount for the caliper trucks. I want it to be completely adjustable so I can change pulley sizes and bring it closer to the deck if I add bigger risers, so this is what I designed: How about this one http://www.bestechpower.com/32v10spcmbmspcbforlifepo4batterypack/BMS-D270.html

That one looks like it will work thanks! Just emailed them asking for the price.

I checked Autozone for a fuse holder and I only found ones for the smaller fuses so I gave soldering a shot and it worked surprisingly well. My system still works and it still doesn’t trip under load (my hand stopping the motor) Cool! glad it worked out. Seems like it should work fine as long as your fast when soldering. You can get the fuse holder I linked above on amazon for the future, though with an 80A fuse, I doubt you’ll ever blow it.

I’ve been emailing back and forth with BesTech and this is the BMS we ended up on. Wanted to post it here before I buy it so I can make sure there are no problems with it. It has a really low discharge rate because I won’t be discharging through it, this kept it really small. So after discovering how hard it will be to get somebody to mill my motor mount/help me mill it, I have decided to buy the one @Jinra recommended: link

Should I get the one designed for 50 mm motors or 63 mm motors? @torqueboards I have a 50mm OM5065, but I have seen 50 mm motors with smaller bolt spacing. My motor bolt spacing is about 38 mm or 27 mm depending on how you measure.

His mount does not fit chaka’s motors FYI. He’s working on getting one that does, but it currently will not fit. I’m using Enertion’s mount right now and it fits perfectly.

@ndwallick - what @jinra said. @chaka is difficult wanted to use some odd motor mount spacing

I do have some v3 motor mounts which will fit Chaka’s mount but the latest v4 motor mount doesn’t.

hhhmmm good thing i didn’t buy the 50 mm one yet haha. How much for a V3 mount? also what do they look like? Can I see some pictures? @torqueboards

In my opinion the enertion mount is best for chaka’s motors at the moment but… cause u asked here the v3 mount. BANG! 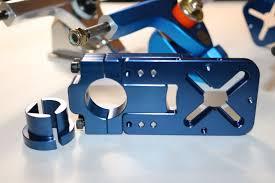 Besides sealing the deck so it’s waterproof, have you thought of a way to keep your bearings dry? I know a lot of heavy grease would help. Maybe a hub cab like some of the hub motors have, but without a hole in the center.