Are these including the Landyachtz board? Also is shipping included in the $999 price? Is there a spec sheet of the equipment being used? Delivery date?

If it’s with the Landyachtz deck and guaranteed to used A123 cells, I might be in.

Landyachtz is included with the KS

Let’s do this hehe

Bump bump wazzz up this deal will close out How good are these “hub” motors?

@ArmandR I’ve tried dual 2.5 at 10s … amazing power and speed … very smooth … can handle hills … and brakes are awesome … def a ride to be proud of

I’ve always enjoyed my Carvons but I did a little mini review if you want to know my thoughts on the V3’s which are technically dual direct drive rather than hubs. 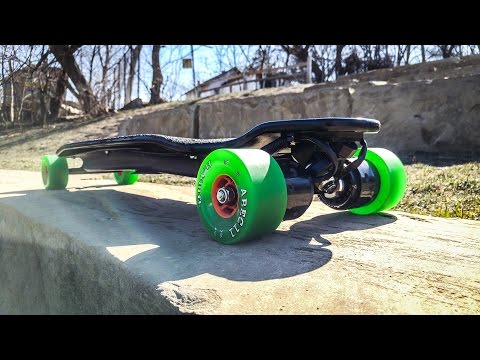 I’m currently riding the v2.5 and it’s fantastic. Smooth and very responsive. Minimal resistance, consistent power, and fewer failure points. Given Jerry’s history, I have no doubts that the v3’s will be a substantial upgrade.

I have 4-5 eSk8 builds lying around, so when I got Carvon v2.5s from Jerry awhile back they sat in a box for months. I was not sold on the hub motors alternative (had one build but the torque was really lacking so sat on shelf), but wanted to give them a shot. Now that I installed them recently on a build and rode for a few weeks, really wish I had done that beforehand! The torque is way more than I expected, even with 97mm uro, and top speed not lacking either (even though lower KV than v2). This sold me on hub motors being more of a future than I had anticipated, as I had tried them for more off a stealth profile in NYC. Direct drive even more so, I expect the Raptor2, Carvon EVO/REVO, Ollin Direct, Hummie, and other next generation hub/direct drives are going to change the equation so worth trying. I urge you to find someone local to borrow/trial, they really need to be ridden to experience!

It’s funny, people are worried abt the torque …and it pulls like a freight train on duals…

Actually that is a good, point…one time one of my hubs wiring dropped and I had to ride single hub, really showed me the big difference. Same speed roughtly, but really weak torque acceleration in comparison. I am 190lbsb btw so really do need dual, but was surprised at the magnitude of difference on torque, so caveat there on single.vs dual.

It’s a huge difference…I know there are are a few nay sayers out there…prob because they had the higher kv motors…and yeah un-sensored with a high kv…not a good combo for anything low speed…but the 2.5 version really gives it a nice rush of power that you can feel… And now with the addition of that replaceable wheel thingy … it makes it really sweet … no need for proprietary thane…I guess that’s the deal breaker for me on all the new hub motors out there. For me it matters, for others it don’t.

If I opt-in, do I pay you or do I pay carvon? Do distributor packs get preference over individual orders?

Pay me… I pay the pack… I send address …boom

@Eboostin who else is in?