Checking and correcting voltage drift in a battery pack

Thought this could help:

Checking and correcting voltage drift in a battery pack

In a multi-series battery pack, it’s critically important that all cells within the pack is balanced — that is, its voltage be identical…

Bookmarking to read later. Thanks for the contribution

Very well written and was interesting to read

Very nice write up! We use a little 5v fan to discharge cells.

ooh yea, that too.

Interesting that cell 1 is the highest reading, my bms (d140) has cell 1 as the lowest reading and cell 12 at 50.4v. Its a new pack i have just built, should i switch the wires?

It depends on which direction you’re measuring. I suspect you’ve got voltmeter negative to pack negative, then using positive probe to measure each cell. If so, that’d work in the opposite direction.

Ahh i see, yes thats what i was doing, glad its all good!

Awesome write up @thisguyhere. Couldn’t come at a better time, as I am about to correct some drift on my 10s4p pack. Was planning on doing this with a bench power supply. Question tho; on you example, you say cell 3 is the drifting one, how come you’re applying the voltage to cell 7? Or am I seeing this wrong?

omg, this is why people need editors.

edit- fixed it, thanks

Think this needs an edit as it seems a lot: “Variance in voltage readings in the “Cell Voltage” column should be no more than 0.75v.”

I was just asking for ideas to do this. U can also hook cells up to a toaster or hairdryer to discharge.

And u could throw all cells in parallel. I just did this to a bunch of cells and with a huge voltage spectrum 4.65-3.4. Barely got warm and took longer than I thought it would. They are 30q cells. How I got (3) to 4.65 was due to charging imbalanced cells after ONE charge. Some cells in parallel had become disconnected during discharge and due to that. Without a bms u have to be on it. With ur hand testing for heat at least.

Think this needs an edit as it seems a lot

i just took the median of the two from experience, because technically it should balance within 0.1v, but that wasn’t the case for me.

I was just asking for ideas to do this. U can also hook cells up to a toaster or hairdryer to discharge.

for sure, there’s many ways to create a load…i was just naming the most common, probably the easiest way.

And u could throw all cells in parallel

of course, again, i’m trying to describe the simplest way to do this. it’s kind of impractical to parallel additional cells onto a P group when it’s already assembled in a pack.

thanks @Lionpuncher for the edit, this diagram is on cell 9, not cell 7. corrected.

o i didn’t understand that a variation of .7 volts being before attached to a bms. maybe not as clear as it could be and I thought it meant generally when building the battery and running with or without bms. whatever. but get that board out going to the po right now.

I’m doing this atm. Works like a hot damn!

They’re tremendous cells, but in the future, if I use them again, it will be for a larger build, aka 12s6+p. Built for ev’s tho so more safety involved in the construction for vibration apparently.

Some stuff that helped me.

Four-terminal sensing (4T sensing), 4-wire sensing, or 4-point probes method is an electrical impedance measuring technique that uses separate pairs of current-carrying and voltage-sensing electrodes to make more accurate measurements than the simpler and more usual two-terminal (2T) sensing. Four-terminal sensing is used in some ohmmeters and impedance analyzers, and in wiring for strain gauges and resistance thermometers. Four-point probes are also used to measure sheet resistance of thin films... 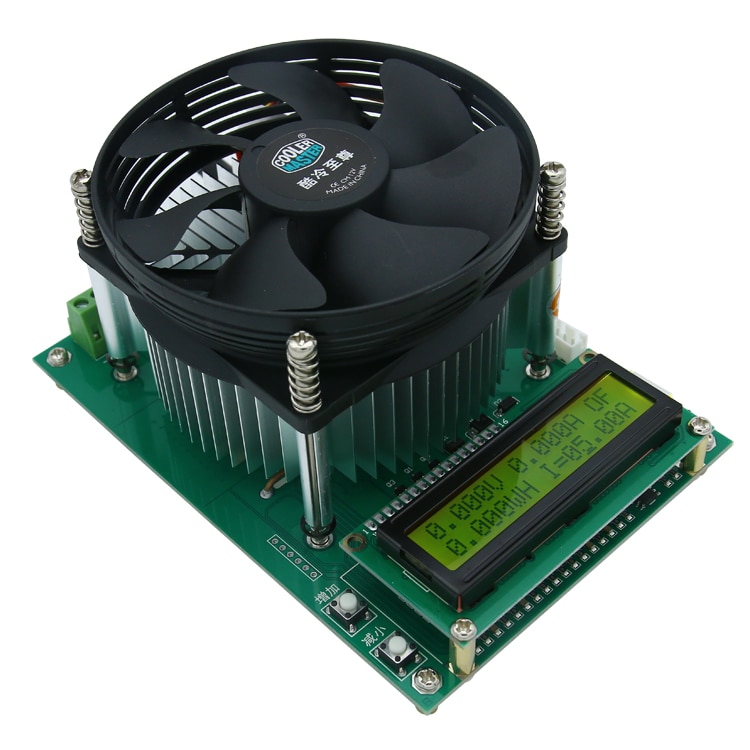 This thing is cheap and really helpful – the flip side to the lab PSU. Careful there are lots of lookalikes and clones. You can digitally set the parameters you want. It has 4 wire sense on the load connectors. In theory you can set the voltage you want to drain to, and the rate (amps) at which to drain, then walk away. Looks like they added tx/rx ports, hmmm…

Rigging this test lead really took away a lot of tedium and danger.

This splitter (15s => 8s,7s) and meter (8s, not super accurate) also very helpful. I made it to balance charge, but it’s very convenient when troubleshooting.

Here’s another meter that can do 8s, and shows all cell voltages at once. Only 2 decimal places, and accuracy is meh. Not as nice as the other meter.

Both meters come in many look-alike styles. The CellMeter style can be bought with light bulbs for decently rapid discharge function.