Don’t these two hubs look awfully similar? Could just be me. That would be pretty messed up for the factory to already start selling their designs to the public.

The orange ones are from this eBay Listing.

The green ones are Acton hubs. 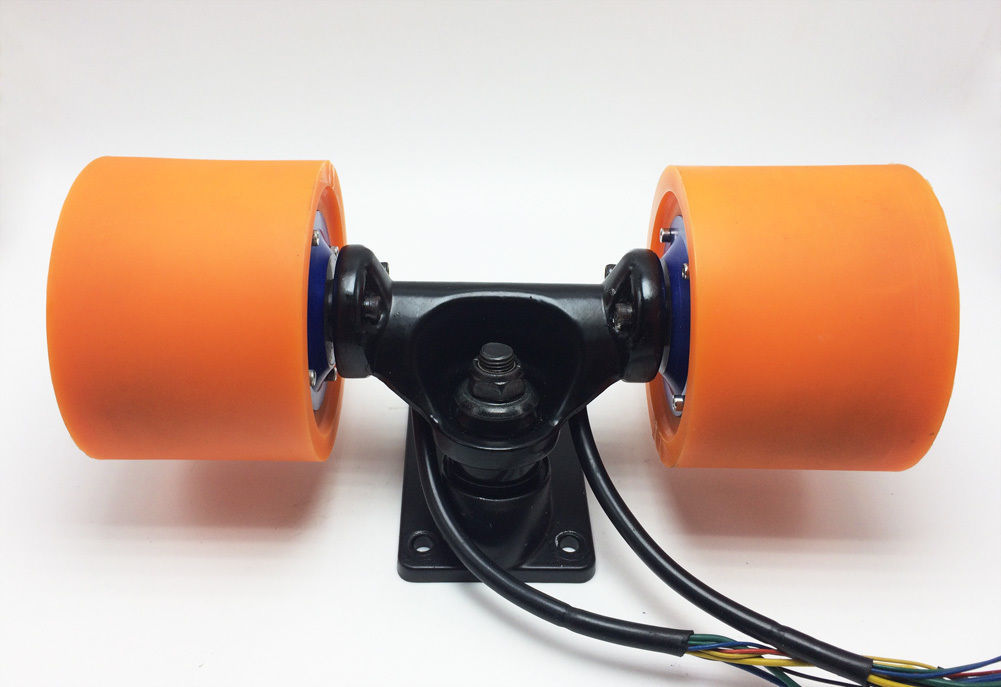 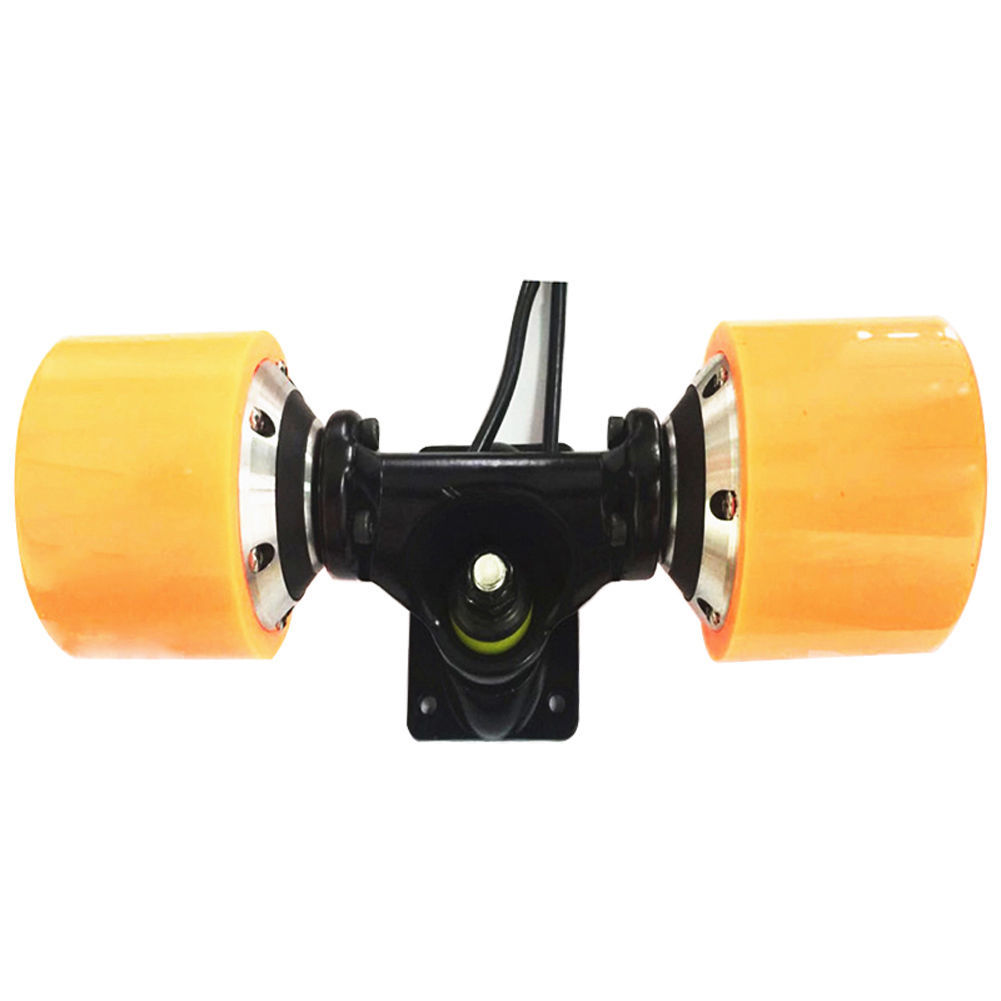 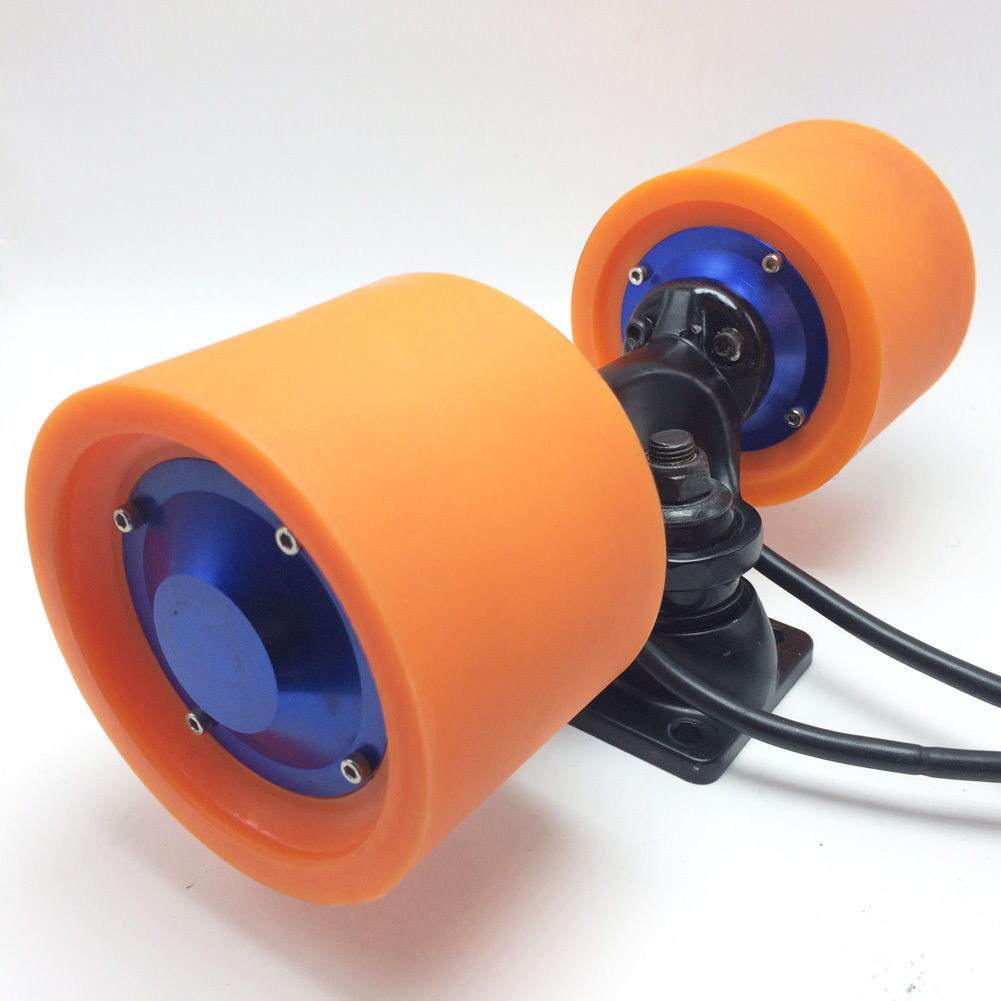 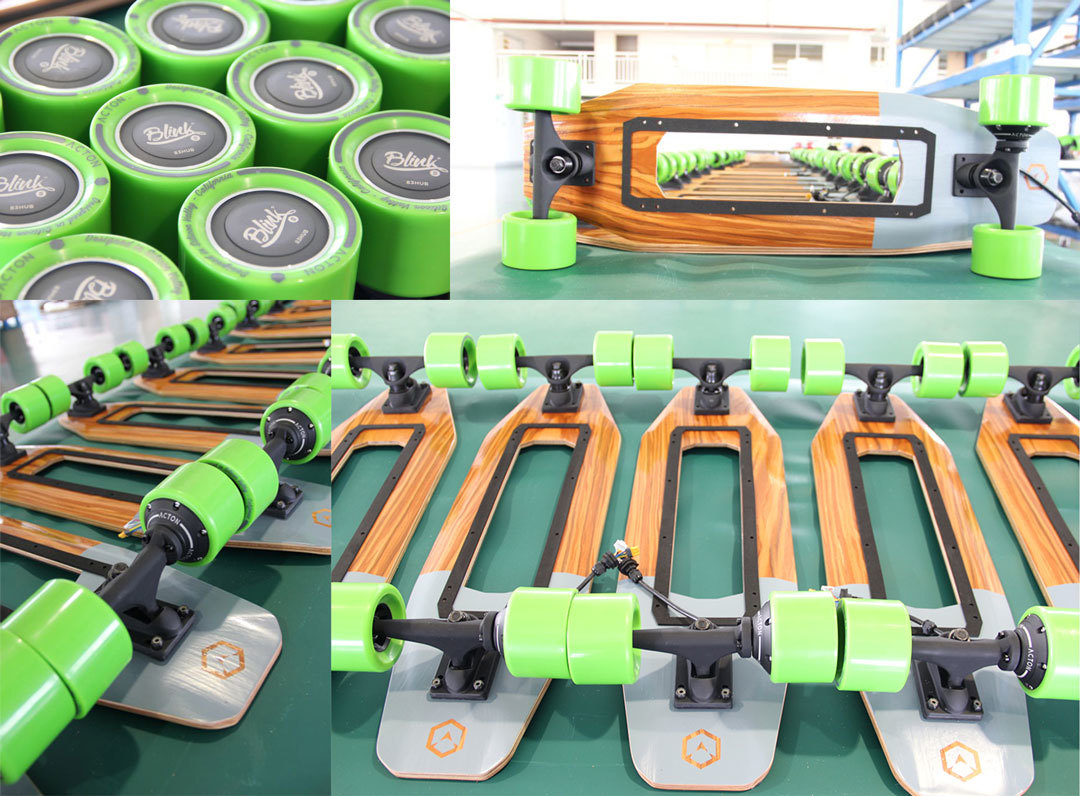 I’m pretty sure their even the same.

acton uses the same hubs/factory as the ewheelin boards, so they sure are the same. I don’t think acton did much more than pick the colors.

Wow, if this is true, that is just sad. They took all the Kickstarter money any put it into that… No wonder the prices are so low…

At least Inboard and Mellow designed their own motor design…

I’m pretty sure most of the money went into the QU4TRO. But I don’t really care since they made the four hub motors really weak. Even with 4 motors its slower and doesn’t provide as much torque uphill as my Carbon GT. Their design work to make the boards look good doesn’t go unnoticed though - they are one of the nicer looking eskates.

Yeah, they definitely look good but what scares me is the reliability of both Acton and Inboard designs… Acton skimped on motors it seems and Inboard skimped on the battery. I feel like there are going to be lots of complaints… but we’ll see.

I pointed out many things about actons boards and how weak they are and the fact that they aren’t doing any real innovation, just taking a rather cheap and low quality hub motor and claiming innovation. Nobody wants to stick their neck out and agree with me, so I gave up talking about it. The real weakness of their boards is not only the weak motors, but the insanly small batteries. how is 2.5 Ah going to get anyone 15 or 20 miles… Heck, the battery will probably sag from 100% to 0% on steep hills. But someone will always stand up and argue they’re great boards.

At the end of the day, most people have no idea what they are buying when it comes to an e-skate board. Unless you are a diy guy whose built many boards, you won’t see the flaws in the designs of main stream boards. I also pointed out the weakness of the raptor 2 being their weak battery that won’t provide enough amps without stressing the battery and sagging ver heavily, but nobody cares. So I’ve moved on. Just do you, because companies will come along and claim they’ll sell you the moon, when your really getting a cheap toy that won’t last very long. It’s not worth it, because you’ll spend hours arguing with people who have never built a board before that x, y and z is a great board.

What battery cell and pack setup is Acton using on their boards? I didn’t seen any info on that.

Also how is the Raptor battery weak? 60A discharge should be good enough for dual hubs? 10s3p Samsung 20Rs doesn’t seem that weak.

Honestly we should push for companies to not cheap out on batteries. This is an issue with a LOT of brands. Hell even my Carbon GT could do well with better batteries. The voltage sag is real. I think the single biggest thing we should push is for every board manufacturer to use Samsung, Panasonic and LG batteries. This really needs to be a thing. Voltage sag and poor quality should never be an issue.

Honestly we are pushing 18650s to the limit. Most boards would be better with well managed Lipos or LiFePO4 cells.

Reasoning being, we demand a lot from 18650 cells but they can only handle the current draw with minimal voltage sag with packs in the 4P+ range.

LiFePO4 and Lipo cells can handle these high currents with minimal voltage sag.

What battery cell and pack setup is Acton using on their boards?

I’m not quite sure about the new acton boards, but the old acton board used a 2500 mAh lipo battery and they are claiming the same range as now, so I’d imagine they haven’t changed very much, if any.

Also how is the Raptor battery weak?

Li-ion cells are not high discharge cells. This is what lipos where made for, and is the reason lipos are used in almost every hobby device. We make them higher discharge by putting them in parallel, but most of the li-ion cells we use in eboards are rated 20 amp cells. If you want them to last, you really should run them at 10 amps max. That’s 40 amps for a 10s4p. I can pull 80 or even 100 amps continuous at 10s with hubs on 15% grade hills (and 40 amps on flat). If you try to pull even 60 amps with a 10s4p of 25r cells, you’ll sag pretty heavily. You need a 10s7p to really get rid of sag (to a reasonable level), but since nobody wants a 2 inch thick board, no commercial board company will do this. Thus, any company that uses li-ion cells will have sagging issues (look at the evolve CGT for example).

Boosted uses the 26650 A123 cells that are 70 amp continuous, and this is how they avoid sag. But the 18650’s that we would want to use are all pretty much rated to 20 amps continuous. And at that rate, it would kill them.

For my Evolve Carbon GT: I’m pretty stupid but I’m assuming the voltage sag is caused by the 10a output offered on the 36v10a battery in the board. Is there a way to replace the battery with another that would provide similar performance and range? Like would putting in a different battery mess up battery readings and the integrated BMS? Sorry this might be a stupid question.

The voltage sag will be very little if any.

That’s not a stupid question. Others have asked about this two.

But honestly the Evolve remote sucks considering all the issues it has. You could use a battery voltage gauge like on DIY builds. I’m pretty sure the Evolve BMS doesn’t even do accurate SOC calculations, it’s just based on voltage which isn’t that accurate.

Honestly we are pushing 18650s to the limit. Most boards would be better with well managed Lipos or LiFePO4 cells.

This is what I’ve been arguing for a while now. But it’s hard to convince people of this since lipos are more dangerous than li-ion.

The whole reason enertion claims they created the vesc-x was so they can do higher amps than the current vescs. But the current vescs can do 46 amps in a dual drive continuous already. So the vesc-x is really quite useless with a 10s4p of 25r cells, since that current vescs can already do this. Through a heatsink on them (like chakas) and you can run 30 amps continuous per vesc (or 60 amps in a dual drive). The vesc-x is hopefully more robust, but chaka’s vescs already have the robustness.

Nobody wants to agree to this though, because unless you’ve built many boards with lipos and li-ions in different configurations, you would never know.

Is there a way to do it without changing size? The enclosure is custom molded and integrated as part of the deck so there literally isn’t any extra space left for more cells. This isn’t a picture of mine but of someone who opened theirs and I can confirm mine looks identical: 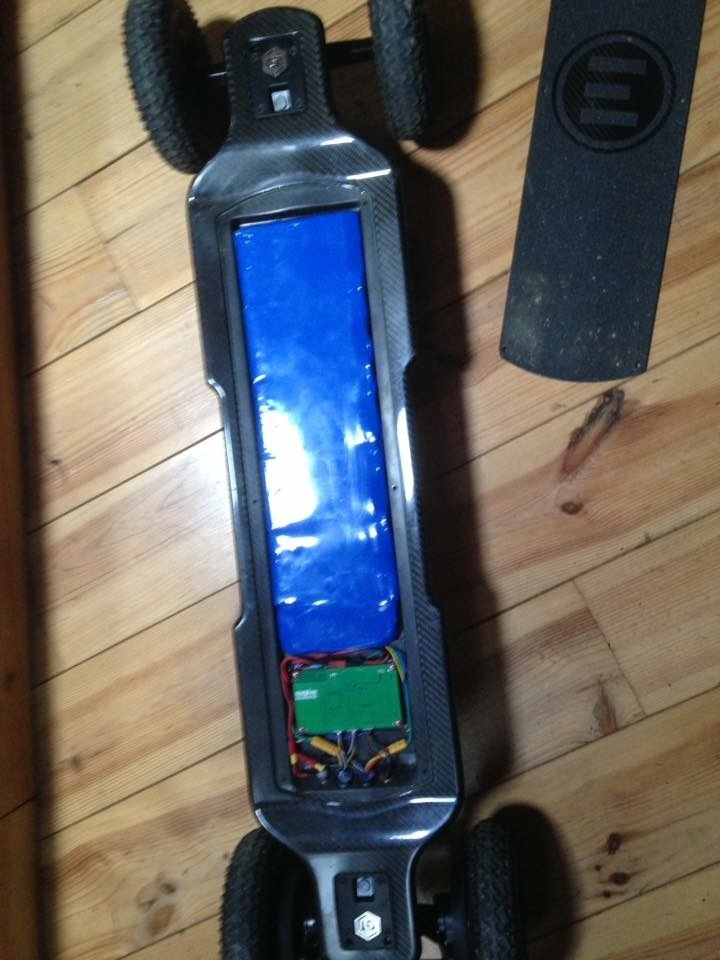 Honestly, I am not sure. If I got a GT for cheap I would do some experimenting. I am not sure if or how the BMS communicates with the ESC or if they are integrated etc.

The best option to change the voltage sag issue would be to use Lipos. That is the only way to use the same space and increase capacity/current rating.

Or you could just sell the board and go DIY. There isn’t anything special about Evolve. The internals practically look DIY.

Yeah I probably should have done that. But I’m in high school and with the kind of courses I take, I rarely have spare time to do anything. I saved up with my part time and pretty much blew it all on the Carbon GT. The biggest thing was how sleek the board looked with the integrated enclosure. So right now the best I can do is improve my GT as I can’t really afford to lose money.

Sorry for annoying you so much. But would this work?

*This indicates that the calculations were rough and I used proportions to +/- 16.5% in order to get these numbers. I’m not saying this is perfect but hopefully these are at least close to the kind of performance I would get.

Honestly thank you so much for the help!

Hey, I’m in high school too. I guess you must be doing more than me. AP Physics and AP Calc take a huge part of my time too

That setup should work great. Quite fast and most people don’t need much torque.

If I make a 26 tooth gear, would I need new belts as well? If so, where can I acquire them. I would most likely 3D print the gears.