Today is my R.D.O. and I’m kinda bored, so made this thread to yammer about my little baseplate project.

I have decided to make different angle baseplates have the hanger axle remain in exactly the same spot at 50/48/46/44/42 and 40 degrees.

Went to upwork.com and paid a Belarusian a total of $46AUD to have SLDPRT model made from scratch.

His first render for me was this. 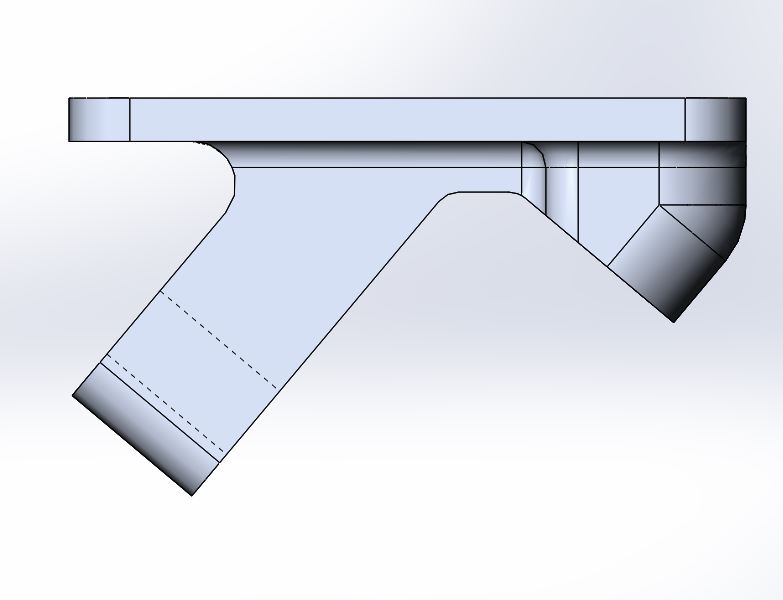 Told him that was real nice but not quite right, and yes he actually thought the axle bolt goes into the kingpin hole.

After some further explaining he went back to work and the rest only took him about two hours after a few back and forth editing. These baseplate can house Calibers and I would assume TB hangers as well.

It is not a copy of the Precision Caliber baseplate at all.(Different shape, designed to keep axle in exactly the same position and pivot designed for venom pivot cups)

Apart from visual differences, the pivot hole is designed for Venom pivot cups. After we got the 50 degrees done, instructed him via image below on what to do for all the other degrees baseplate. 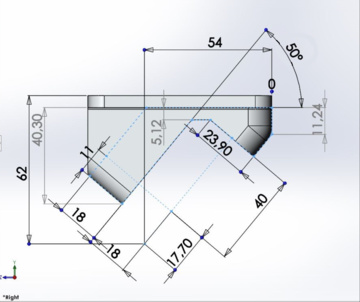 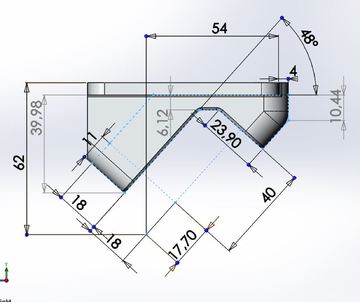 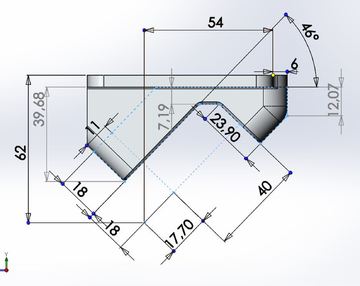 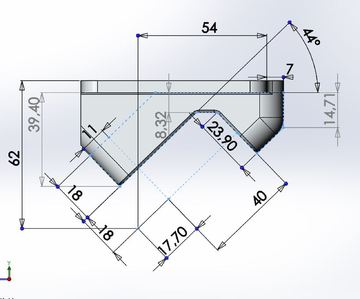 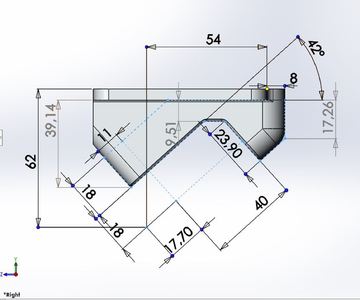 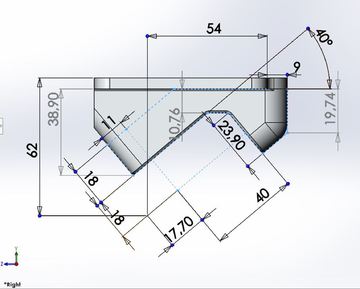 What do you folks think?

I visited Cindrich years back, and he was the first person to show me how keeping those dimensions consistent was important when he was showing me his adjustable baseplates.

Whats the end goal with these?

Yea I’m also curious what the change in angle will do for you? The steeper the angle the sharper the turns and less force to initiate right?

EDIT: Also will you be having these machined?

My end game is to have my preferred angle baseplates made for personal use and to give away the SLDPRT and .x_t files to the community for anybody who wishes to make and sell them which is anyone!

It will also go with my custom 220mm hangers of which I was talking about here.

Altough I have made some small changes since then by increasing the bevels on the four sides so it could fit into Trampa’s Caliber mount and also to keep the hanger largely within the bearing 22mm diameter.

Current version of my hanger right now below. Thats super cool of you, and I guess you can’t go wrong with more options. BTW if your curious I’m pretty sure with a school email you cant get a decently long trial for solid works, so maybe you’ll be able to make these for yourself. I use inventor because my school gives it to me for free but I think its cool your making these as options for the people that want it

Yes I will have it machined.

No need for it as all the work is almost done anyway.

May have to make a small edit on it, to make the butt that stick out go up at an angle like TB baseplate does cos I will be using G-Bomb brackets. Just a little oversight I made, otherwise pretty much all done!

Whats the point of a g-bomb bracket? I’ve seen them before but never really looked into them, are they just to lower the deck?

I had a lot of trouble finding drop down decks that could comfortably house 12s5p batteries, DieBie BMS and 2 large Trampa VESC 6’s and also allow 6" wheels.

I managed to get a custom made SubSonic Illuminati 34" which gave me 28" of space for enclosures and 10" width and is super stiff, with a 36mm drop!

The point of G-Bomb was really for pumping.

omg i never thought of that, I’ve always stayed away from drop down, or double drop decks because battery packs would hit the ground, but now i’ll look into machining some of my own brackets.

Cool work. Seeing your work on your trucks, I’m sure you already know this, but maybe for the benefit of others, it’s worth checking the clearance of your motors when using GBomb brackets. Obviously, it depends on which brackets and mounts you use.

Looking forward to seeing your monster Illuminati. I’m thinking of doing something similar at the other end of the spectrum, converting my 24” version.

Yes I was aware of that, got around the problem by using the G|Bomb deep drop stubby. 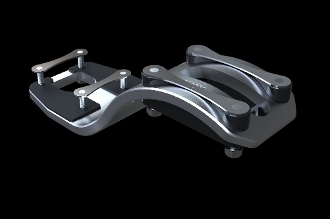 Clearance is better than using standard long board as there is no board to get in the way at the back. Also, I’m thinking of making an unique mount not too dissimilar to pic below which will locate the motors up in front of the baseplate.

That way, motor ground clearance is no longer an issue and I can use the G|Bomb full bracket cos the stubby is barely useable for standing the board up with 107mm flywheels, Will not be able to stand it up like in the pic above with Trampa 126mm gummies. Ok, I have made some revisions on the baseplate.

Firstly I was aware that the pivot end would prevent me from using it on a G-Bomb bracket and secondly, I know there are some longboard with sunken truck area like the pic below of which it would prevent the use of the baseplate.

So I changed the design around a little and here is the finished product for 40 degrees. 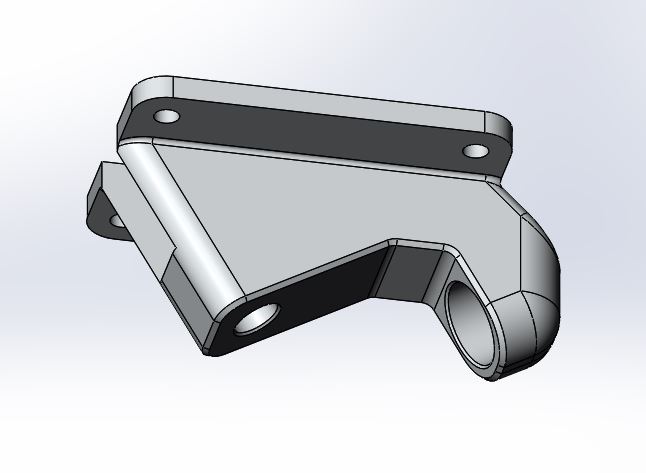 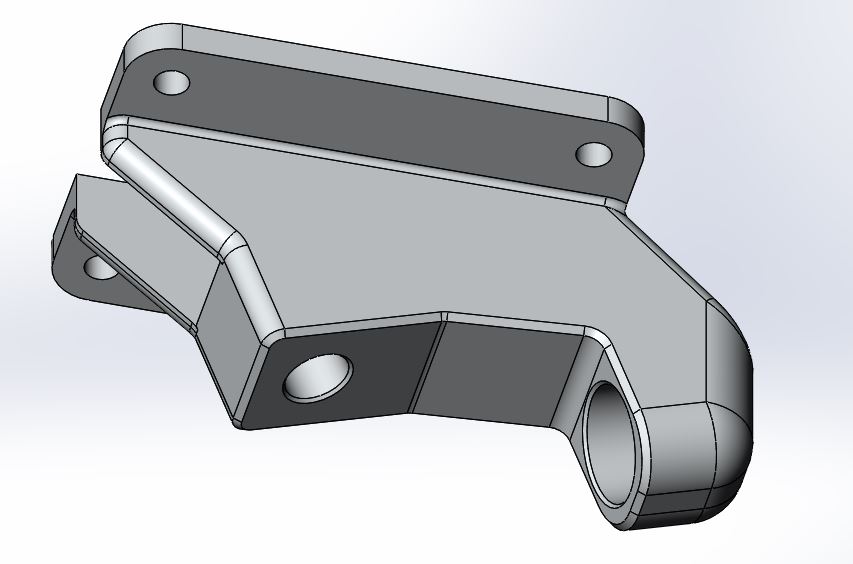 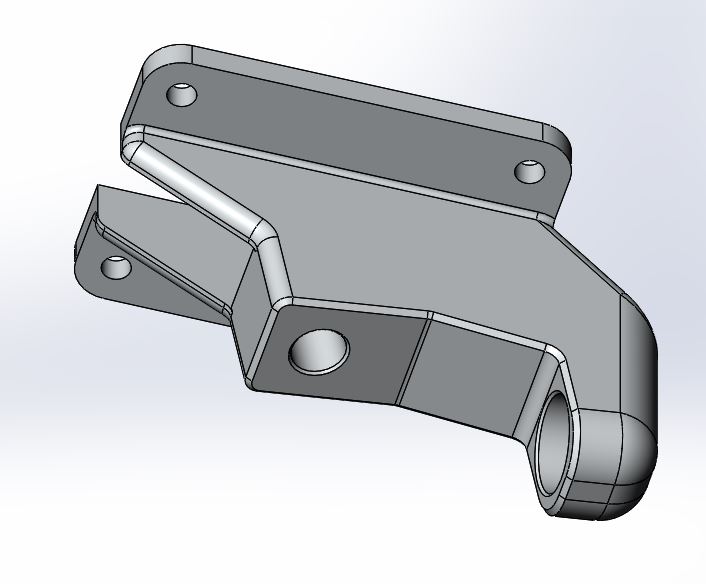 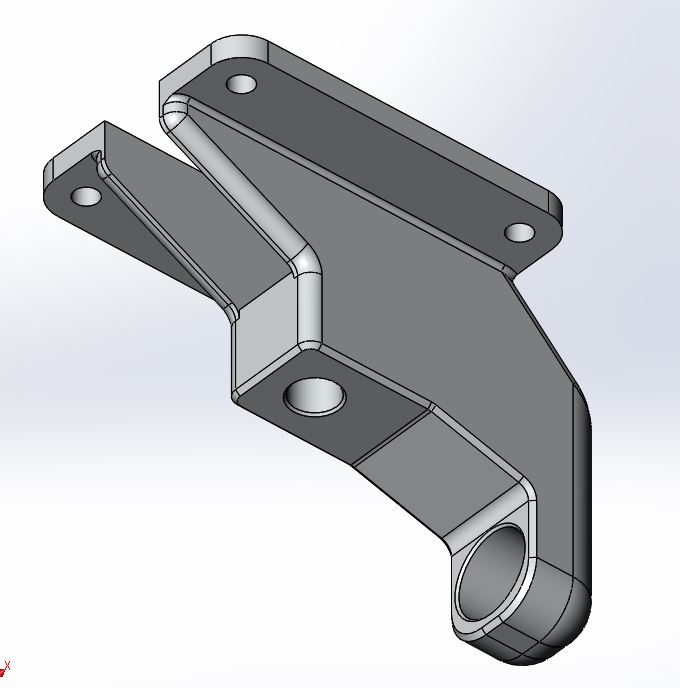 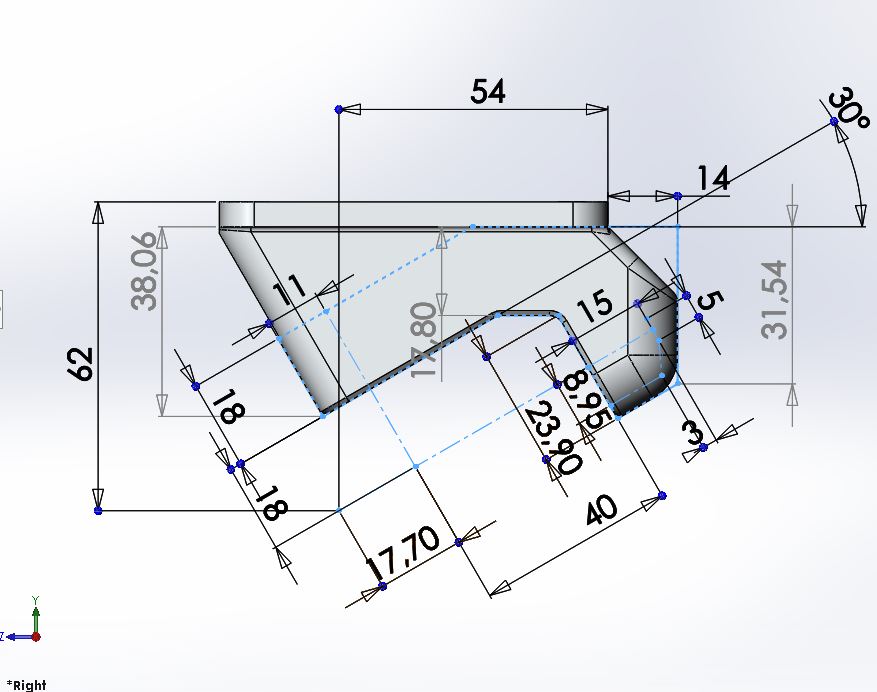 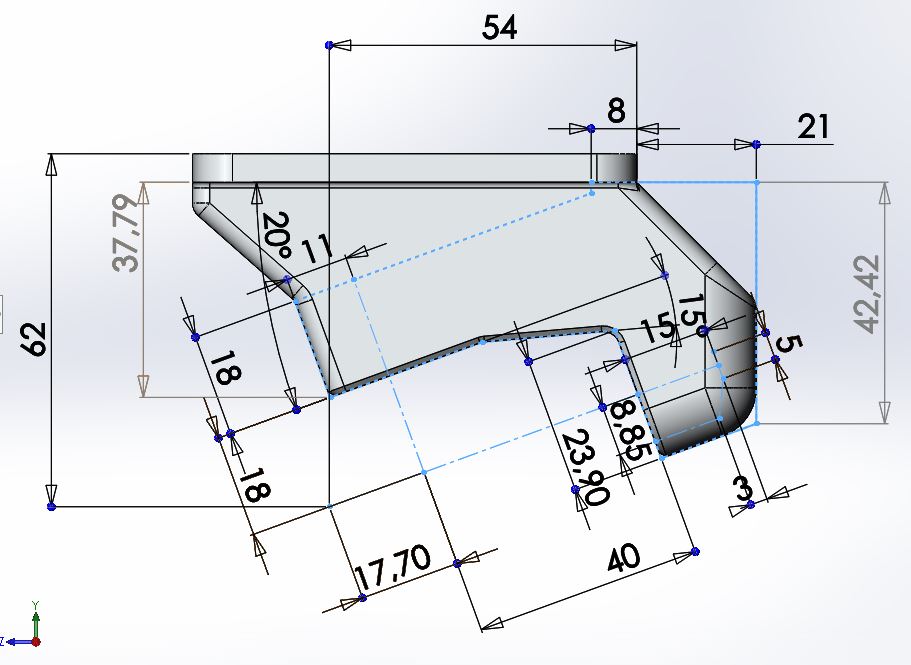 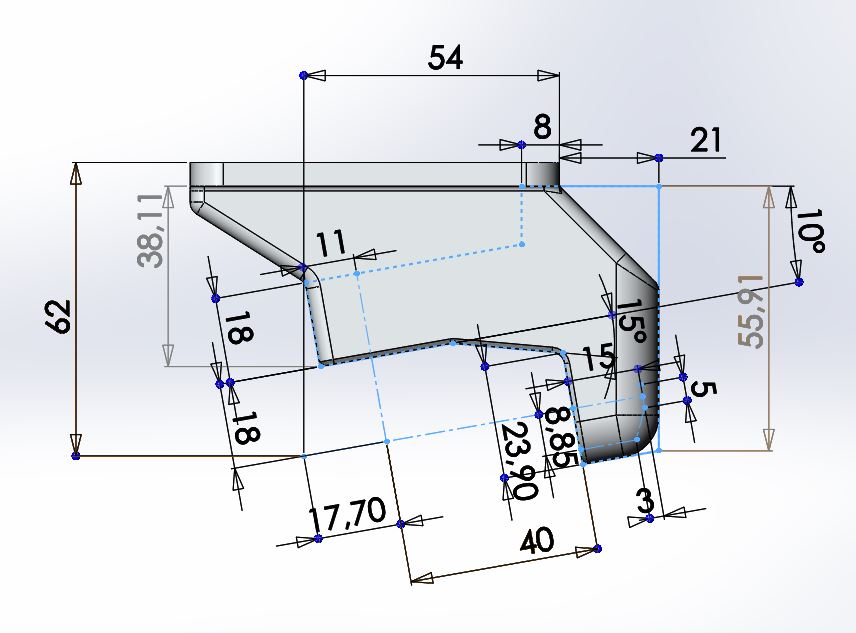 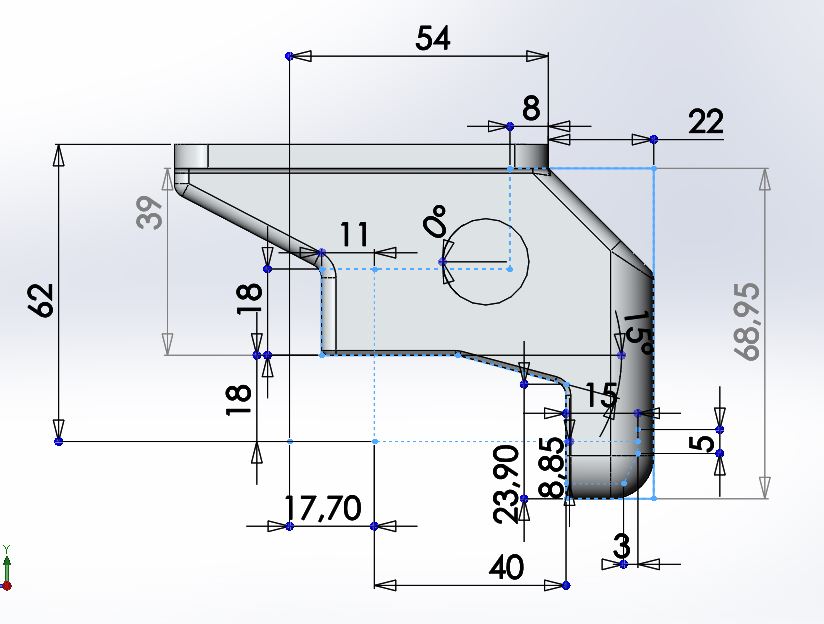 Still need some more editing on the ultra low degree hangers as there is some empty spaces that needs a bit of filling in. Once that is done, I will have one of every second degree from 0 all the way to 50 like 0, 2, 4, 6 and so on.

For Metro pulleys, just get a hanger that is 30mm smaller. That means for dual Metro pulleys to match 240 front hanger means you need to get 210 hangers for the rear. Visual with a circle that is 22mm in diameter for bearing. 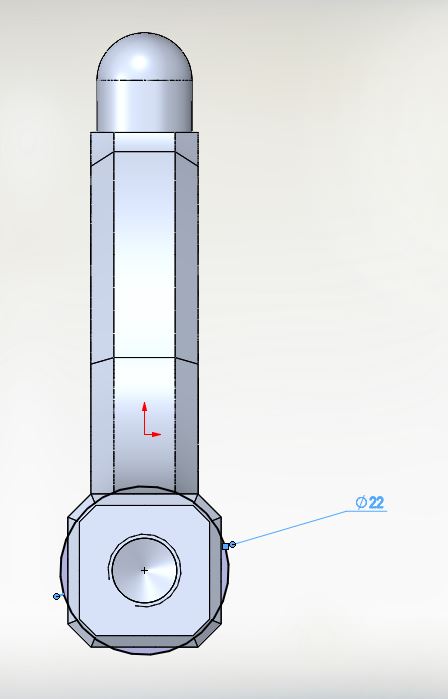 Alright, I try it…where can we get them?

You can get it from my GrabCAD page

I’m glad I can offer something that people in this community would like to try!

Progress can be seen on the other thread.

Yes, I had these made at 3DHubs which sources the job out to China.