I am looking for a custom builder to make me a nice board that I can run 97s and pneumatics on.

Emailed LHB but never heard anything back so I am looking for other options.

You can ask @Kaly, he builds carvers (urban/Street) setups.

My justification for continuing my torment of them is they have lame packs. I’m going to take all those lame ass packs and use them for something more suited to their performance: starting bonfires that will accept my beer filled urine.

Lol what’s the deal with evolve battery packs? The range seems good on the gtx

ok so the bamboo came with multiple batteries to start, not just one they decided on and went with.

You would think a 10S 7Ah pack would be able to handle something. IT handles squat. Discharge beyond 50% and watch your performance tank as the voltage sags below your great grandma’s tomb every time you hit the throttle. and the range is not as advertised. Its crap.

To sum up, its basically a 10S1P with shit cells.

What’s the range on the GTX? From what i’ve heard, its just a gold plated GT. Same shit pack.

Yeah thought it might be shit cells,what do they use do you know or are the unbranded? The gtx has a crazy range of 30 miles,searched youtube and found someone test this and they got 1 mile less than that but looked like an all flat smooth ride no hills. My range goes right down with shitty rough roads compared to smooth.

Not sure what size battery they use…give me a minute will search my youtube history and try find the range test.

Here’s a video while I look for the range test! In this you can see they routed out the board to fit the battery with proclaimed 30 mile range! Not sure if they done that to stack cells!

based on that and all the pics i’ve seen, literally nothing has changed that concerns my bamboo mods.

I will need to get one in my hands to confirm that though. There are things that could have happened inside the box.

Apparently there’s alot more flex in the gtx must be due to routing out the extra room for battery. Anyway you were right eco mode is how he got 29 miles, not sure what the top speed of that is!! Here it is,turn the volume up full,this numb nuts filmed with a go pro in a case lol

dammit i wish i had like 10 of my boards laying around for people to review. I get asked a lot. I never have one thoguh unless i build one specifically for it.

I ended up robbing the pack out of that Gear Diary board. lol

you know what i’ll bet they went with higher amp hour shit prismatics. No way those suits found it in their portfolio’s interest to go 18650s of a decent quality.

Somebody needs to send me one so i can see what’s in there with my own two eyeballs of questionable performance.

Is there any reviews of your boards on YouTube? Iv seen one where he was comparing yours to a raptor and sent it all the way back to you just to change vesc settings!! He asked for strong brakes and that’s what he got but didn’t like it! Your builds look awesome. Also seen your unboxing of the spacecell…nice chainsaw haha

Haha they have spies on here beware! Fill out an application form I hear there hiring!

Gtx range test was 13mph for 29 miles and was smooth flat ground no hills! Not bad they obviously improved but would love to see how it handles hills and rough roads compared to my build. There’s a big price difference!!

lol yeah sounds they just found a 10ah prismatic and some gold foil. 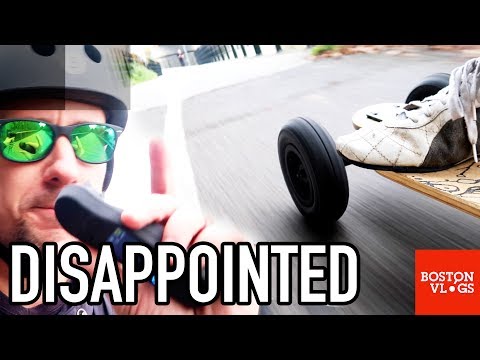 Still, They certainly have left Boosted in the dust.