Wanted to make a city cruiser with 8 inch slick pneumies for lower rolling resistance and to be able to roll over cracks, sticks, etc. Got inspired after seeing some great eMTB builds here. Going with VESCs (when they arrive) and probably 10S LiPo set up for now. Started by making a Trampa-like deck using CNC machine. Used a piece of cherry that was laying around and fused it with some birch? ply for the curved risers. Used to have an old school G&S solid wood deck; I guess that’s why I’m going solid here. Not intending this for jumps or anything so don’t care about flex or curvature. Just city cruizing. Ply cutouts. Didn’t have single ply veneers so had to go with triple ply. Laid out so the 2/3 of plies had grain going with bend. Wasn’t sure at this point if this would work or if it would be strong enough. Glue up on one side at a time. Using a couple clamps allowed good control of the curvature. It also gave control along X and Y. Didn’t have time to create a form. This method turned out to work quite well. Added more clamps to make sure plies were well connected to each other. Both sides glued up. Bottom. Added some channels for light weighting. Forgot to zero bit so channels are deeper than planned. Looks to be okay though. Feels strong enough (did a couple short test rolling rides with no motors.) Might make channels circular next time and see about putting batteries in them. Still needs a coat or two of polyurethane. With wheels and trucks. Box o’ parts. Still waiting for VESCs. Bought a coulometer on eBay. Updates to come. Can’t wait to get this thing motorized. That sir is amazing craftsmanship !!! Can’t wait to see the final result.

No you did not! That shit looks great! Looks exactly like my trampa! Is there a bit of convex in the deck? A bow upward imthats like trampas signature thing

Sry but that should be censored because of skateboard pornography.

This deck is sick love it

I love working with Cherry! I just dig how it darkens with exposure to sunlight. BTW: I’m lovin’ it! Great craftsmanship!

No bow or convex in deck. Wasn’t sure if this method was going to work at all so wanted to keep it simple and learn from this first attempt. Never done anything with curved laminates before. The deck has some flex but not much. Feels pretty good. Seems like it will be strong enough for what I intend it for (hope). Went with a trampa shape since I wanted a true and tried shape for this first one. Next one will be unique. Might carve some convex into it with the cnc. Been enjoying your Trampa build. Looks great.

And when you have done all of those great things. Then, you could make few more to sell us!

Thank you sir! My build doesn’t require nearly as much skill as this master piece

@bill_f I like how you used a modified half lap/mortise and tenon design. It looks strong, but the top looks very clean and shows off that woodgrain. I’d love to see a version with figured maple piece in the center!

Some wiring questions here and a short update. Should be getting a pair of VESCs from diyelectricskateboard tomorrow. I also ordered a pair from Ollin with heat sinks. Been told they will arrive soon. Might wait for those in order to have heat sinks and use the others as backups or on my next build. Damn these things are hard to get! Sanded off the crappy laquer that I had put on before. Could never get it smooth even after thinning and a few tries. Went with some some spray-on instead. Did about four coats. Looks a lot better, imo. Got some grip tape. Trying to figure out a cool pattern that works with the battery box placement which will be on top, between feet. Had to drill out some holes on the Scramboard motor mounts in order to get them to fit on the SK3s. Luckily, I was able to use the motor mount that came with the SK3s to align the other two holes. For some reason, the Scramboard mounts have two holes in the right place for the SK3 hole pattern (but not four??) You can see the undrilled mount on the left. I countersank the holes to keep things flush and away from the motors. Will start with a 12 tooth motor pulley (had to order one to work with the 8mm shaft on the SK3. The Scramboard kit comes with pulleys bored for 10mm shaft.) Was also able to order a 15 tooth motor pulley which I’ll try later. The 12 tooth gives me a 1:6 ratio which, with a low KV motor (149) might be too slow. ?? I had to order some longer belts to use with the 15 tooth pulley http://www.aliexpress.com/snapshot/7823362372.html since the belt tensioner slots on the motor mounts were maxed out already on 12 toofs. Can’t find pulleys with 8mm bores that look like the ones that came with the Scramboard kit (right pulley, below pic). These have the set screw on the side, providing more purchase on the axle. The ones I’ll be using are off the axle end by about 3.5 mm. I think they’ll work okay though. If anyone knows where to get a 12, 14, or 15 tooth motor pulley that looks like the one in the image below and has an 8mm bore, please tell. Now for some wiring questions. Please let me know which diagram looks correct. I kind of feel like the first one is wrong. Need to wire between VESCs differently, like in second diagram. That’s my guess. Electronics is not my strength by any means. Once I get this simple version up and running, will look at adding two more batteries to create 10s2P rig. Will then look at how to make battery charging easy. Haven’t even begun to figure out how to set up this coulometer. One of the eMTB guys here has it on his rig (forgot who).

Version 1: You can edit or comment on doc here. 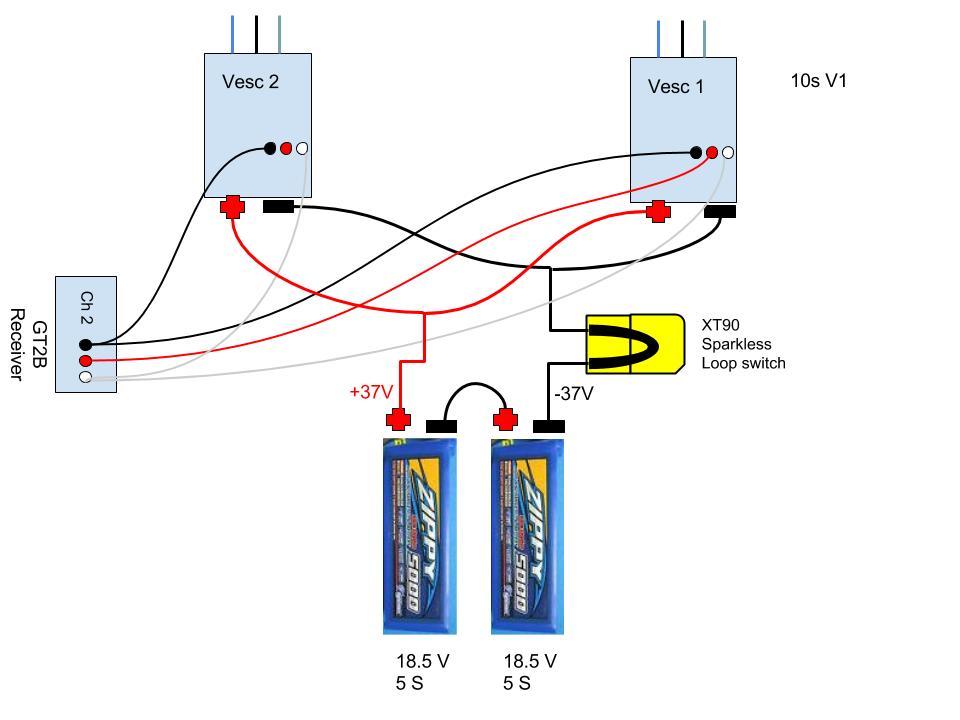 Version two: You can edit or comment on doc here. 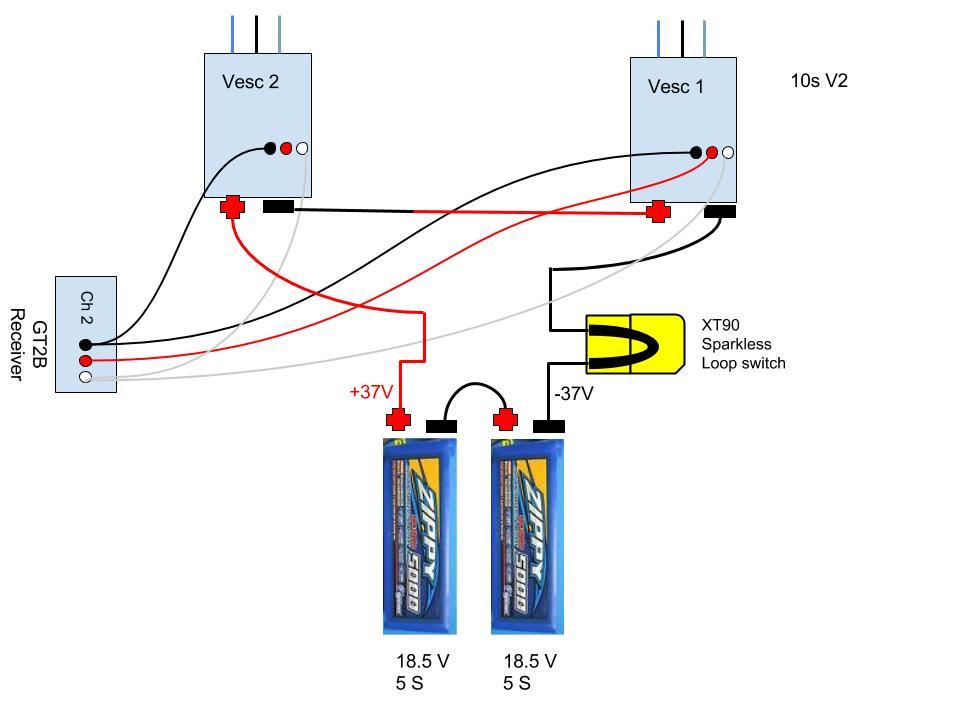 Thanks for your feedback! Great community here.

Just some minor thing: Ground is not -37v but 0V. Otherwise you would have a total voltage range of 74V.

Also diagram 1 should be the correct one. You don’t want to connect the vescs in series but parallel.

Okay, thanks for your help. Good to know.

Still need to do a few more things like add the coulometer once I figure out how and where to put it (space limitation on battery box). Might 3D print a custom enclosure for it and place it on top of the UK Battery box. Been running it at 10S, (2X 5000mah 40C batteries) and it’s definitely torquey with the 149KV SK3s. Goes up hills no problem (180 lbs rider). Hit 19.7 mph on a 7% hill (going up) with full accelerator. Still need to do calculations on flats and downhill although feel more comfortable testing speed going uphill since stopping is faster. Brakes feel great. Nice and progressive and predictable. Remote feels great, nice and responsive (GT2B). Happy with the gearing for now. I can feel there’s still plenty of power under the hood if I ever want to gear down. Could also go 12S.

Vescs, batteries and motors are all staying cool, even on hot summer day. Was worried about VESCs. (Using diyelectric’s for now since they arrived first. Was hoping to get the Ollin’s first since I ordered them with heat sinks but it doesn’t look like heating is a problem so I went ahead and installed the DiYs.) (Still waiting for the Ollins.

For now, just using the two 5000mah batteries and getting about 1.55 Volt dropage per mile with hills (6-12%). With four batteries, in this type of terrain, I would expect about 20 kms range. Thinking I might just keep two batteries in backpack when I ride and then switching out when needed. Want to avoid more wiring (for parallel) in battery box since it will be getting tight in there. Will figure that out later. Would look nice with some aluminum hubs. Will post some ride videos once I charge up the GoPro.

That deck is so beautiful and deserves something more beautiful than these yellow boxes. You are a serious craftsman and I’m sure you will find/make something what fits the Cherry Stick better! Respect to your wood working skills btw. Does it have any flex?

Superb workmanship, there truly are some bloody clever people on this forum/in the world!

That deck is so beautiful and deserves something more beautiful than these yellow boxes.

really this is ART!

LOVE IT!.. seeing things like this makes me so happy to be involved with this community.

You might also consider can bus for the VESC, however splitting the PPM is perfectly fine too