Well good evening guys, I got some requests for doing a build thread on this form after posting some pictures in the pictures thread. I am a great fan of speeds. Snowboarding, windsurfing and a lot more.

After half a year of research I thought it was time to make my own board. I wanted something that had a lot of torque, range, speed and a sleek design. My thoughts were that the boards on the market weren’t what I like. So I opened autocad and started drawing, drawing, and drawing. After a couple of days I had some versions ready and printed them on paper. I cut with a saw the deck and my second layer which supposed to be my enclosure without being an enclosure. 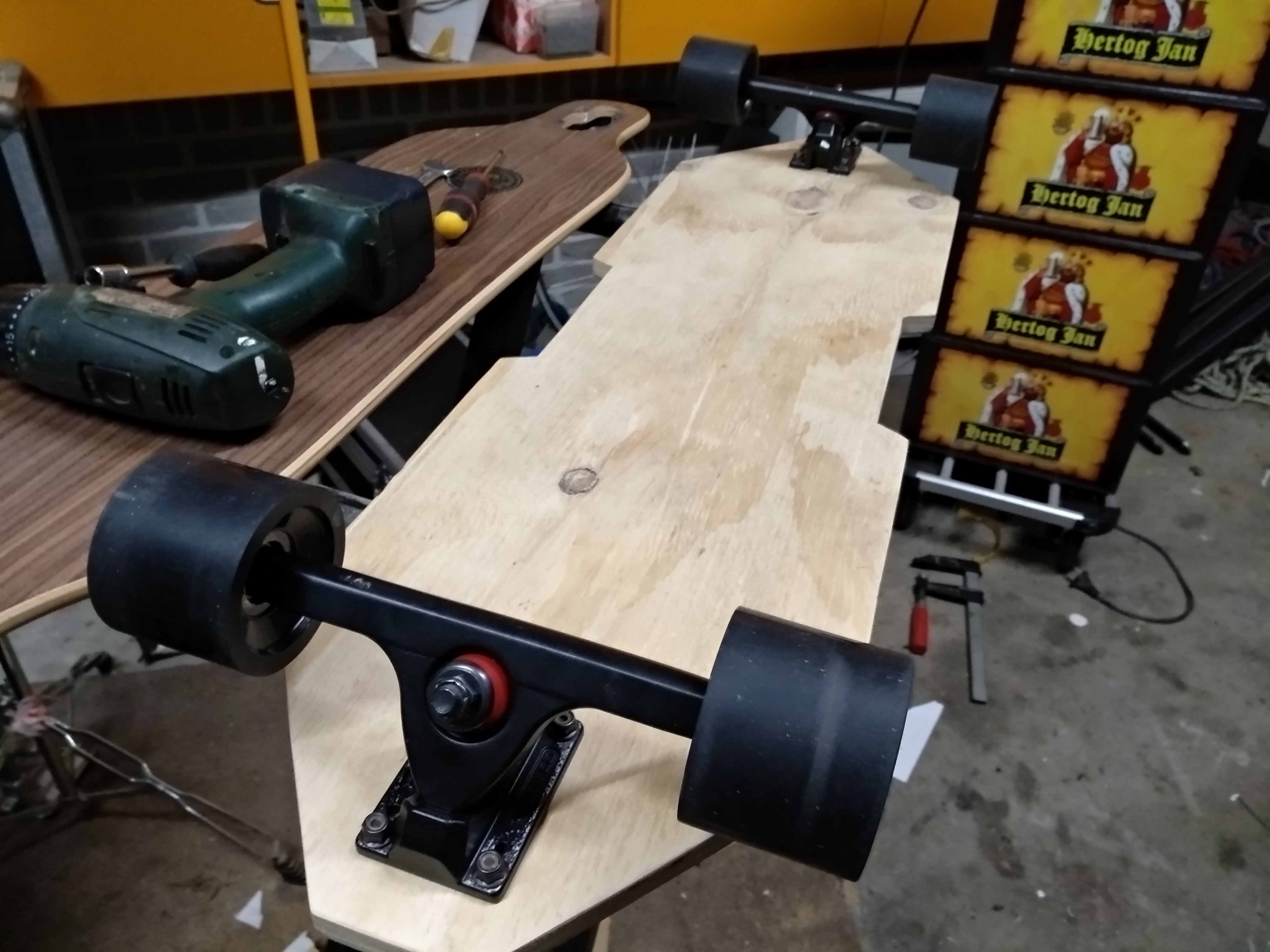 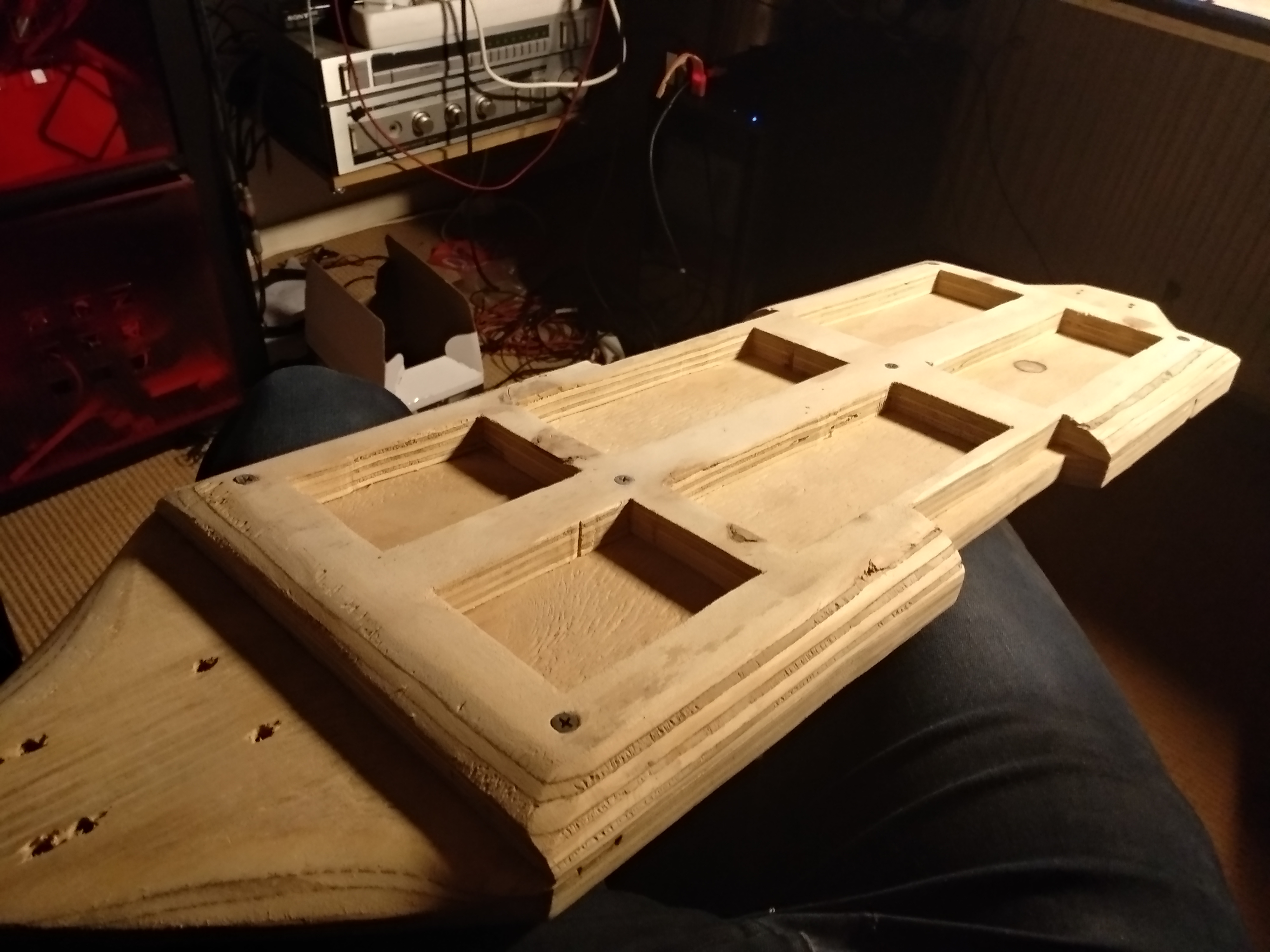 I made this from a cheap sheet of wood and did some testing. After thinking what I could improve I thought that it was easier to make one hole for the battery instead of 4 small ones. So I made this. 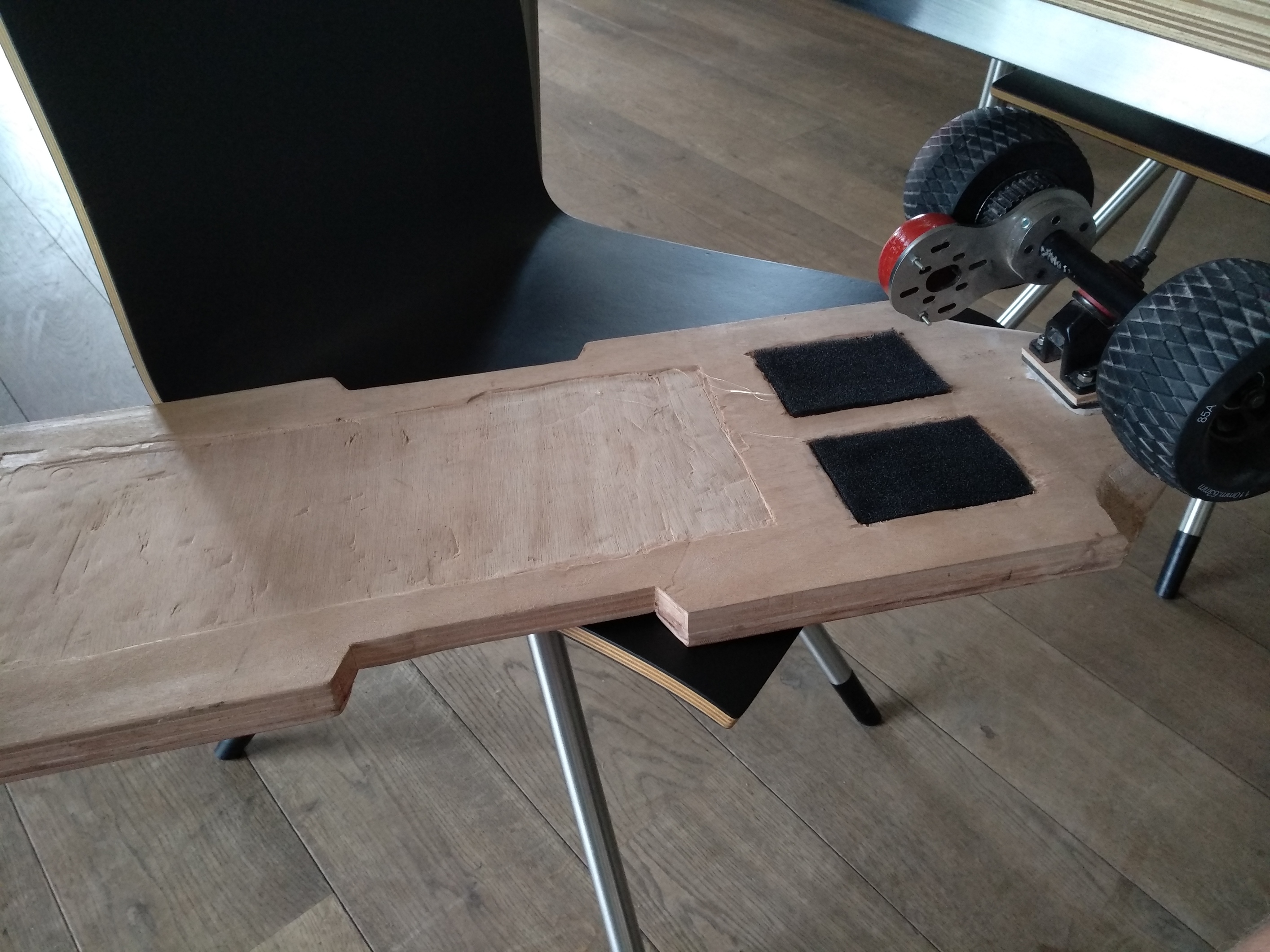 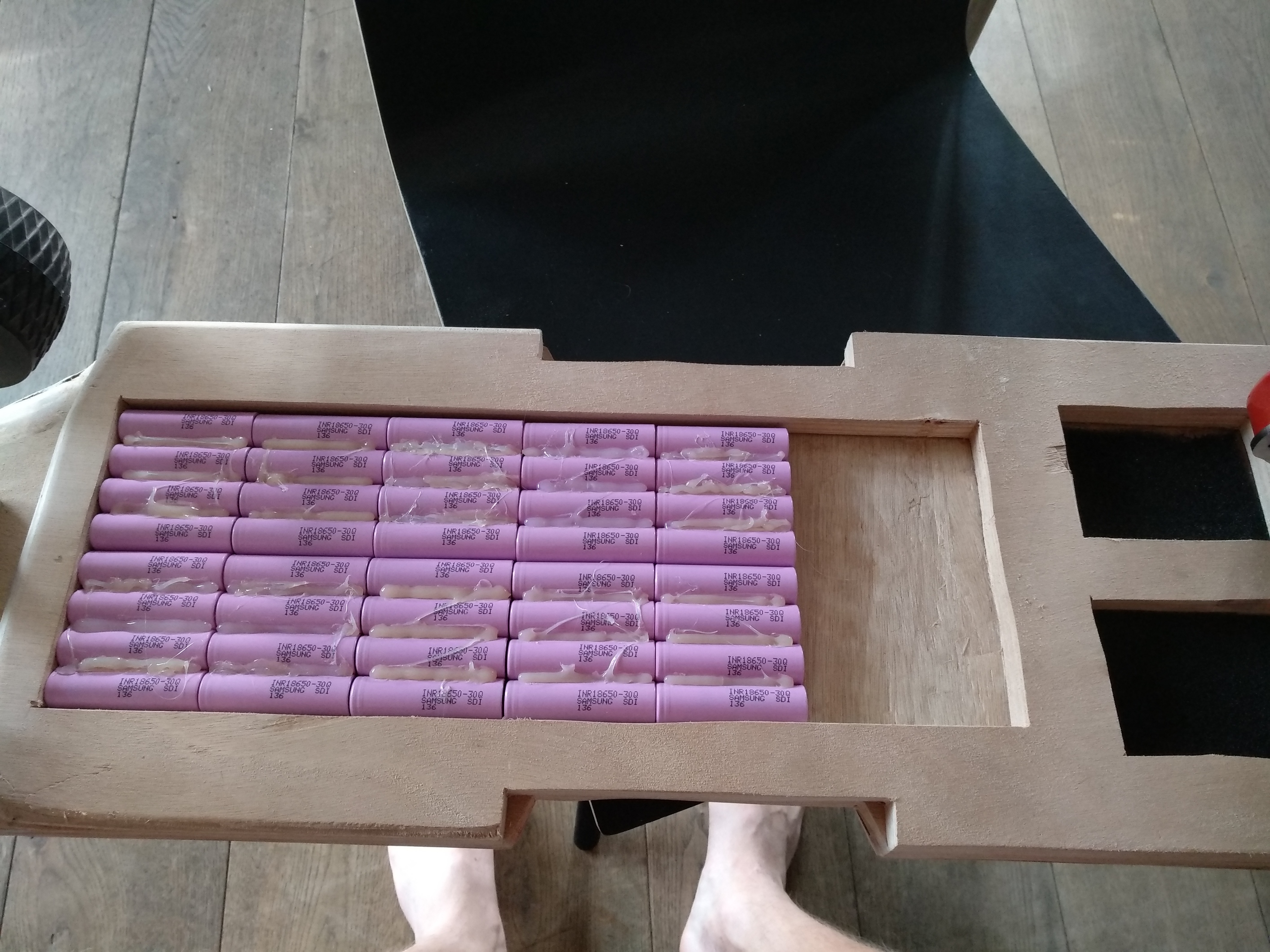 I used just two 18mm sheets of wood but I found that it needed some concave. I glued little wood things on my board and started sanding them until I liked the shape. 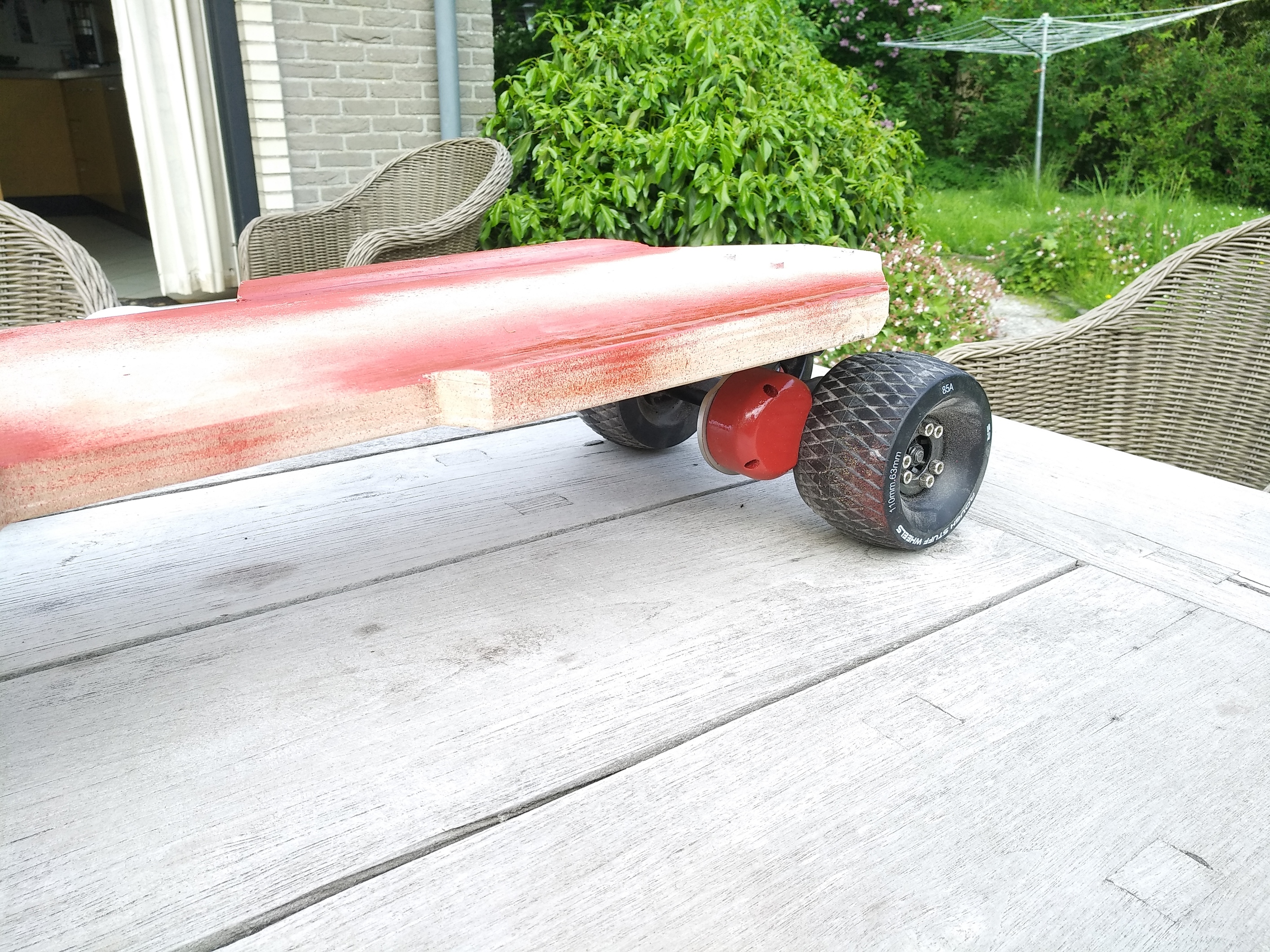 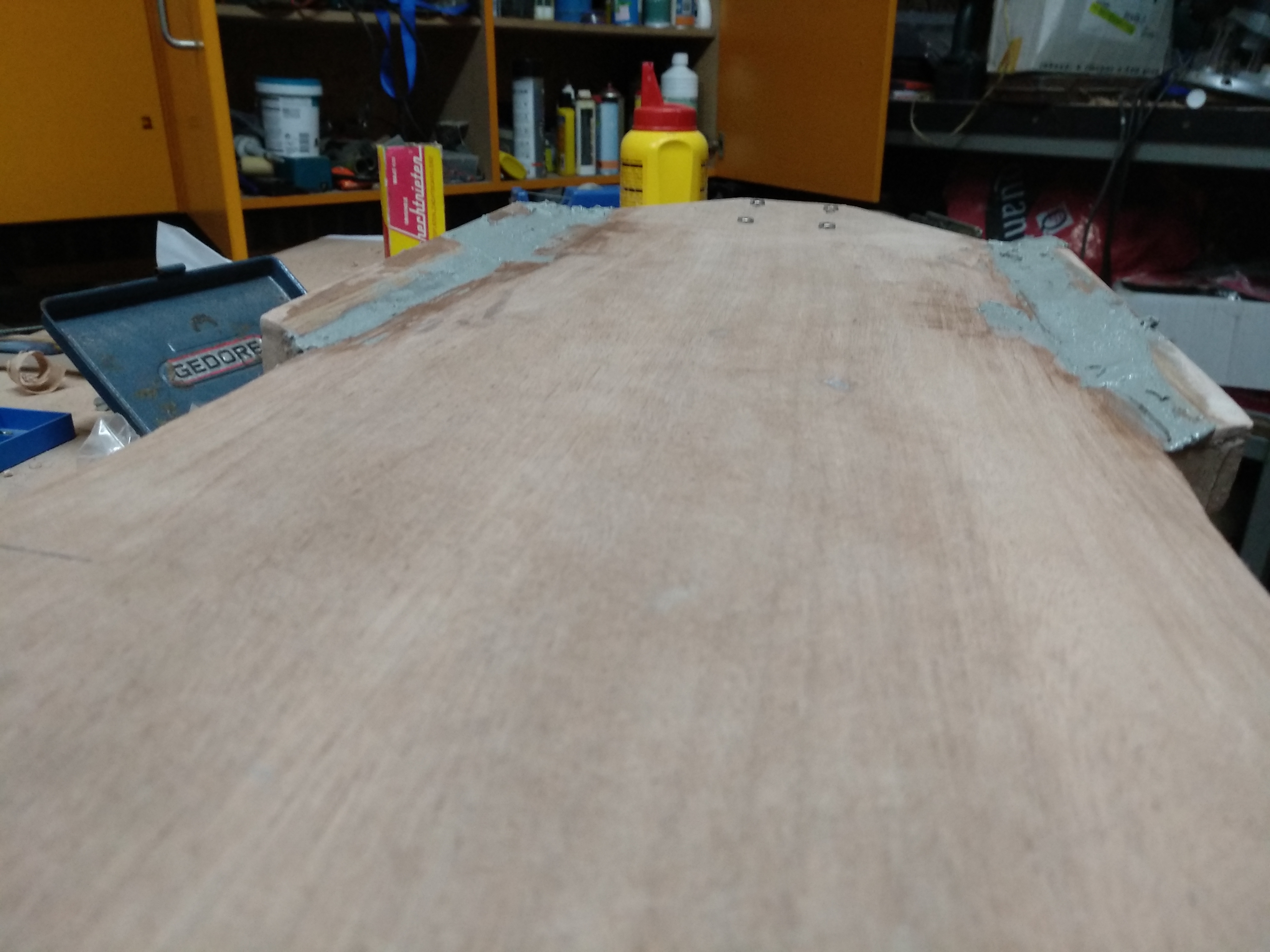 When this was done it was time to fit some electronics in and fix the gaps for everything. Instead of a focbox I got the maytech vesc. My board wasn’t designed for the maytech so I had to cut another hole in my second layer to fit the condensers. For the motor I used a APS sensored 6384 170kv motor. The remote is a cheap but very reliable Chinese remote from eBay. 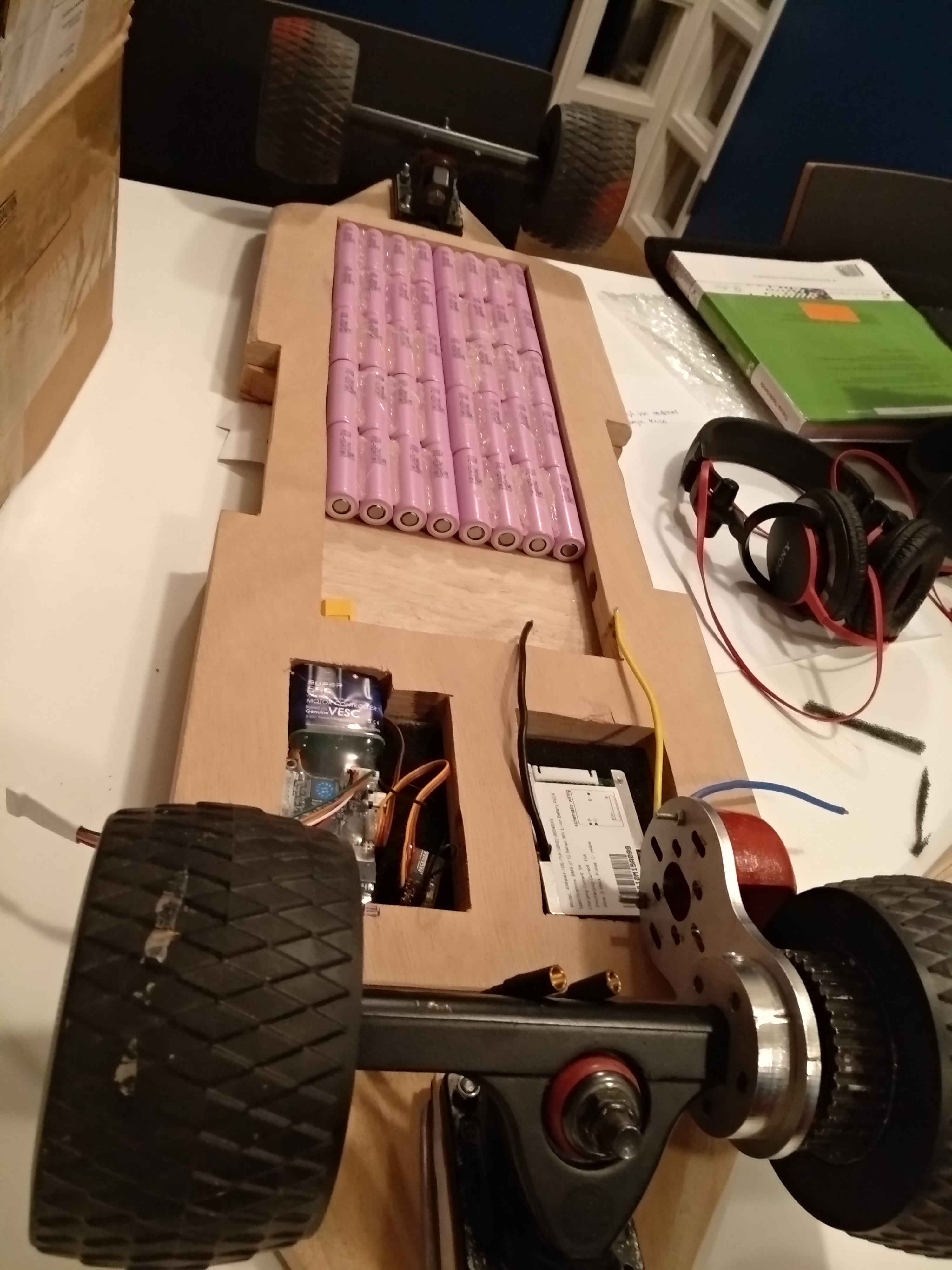 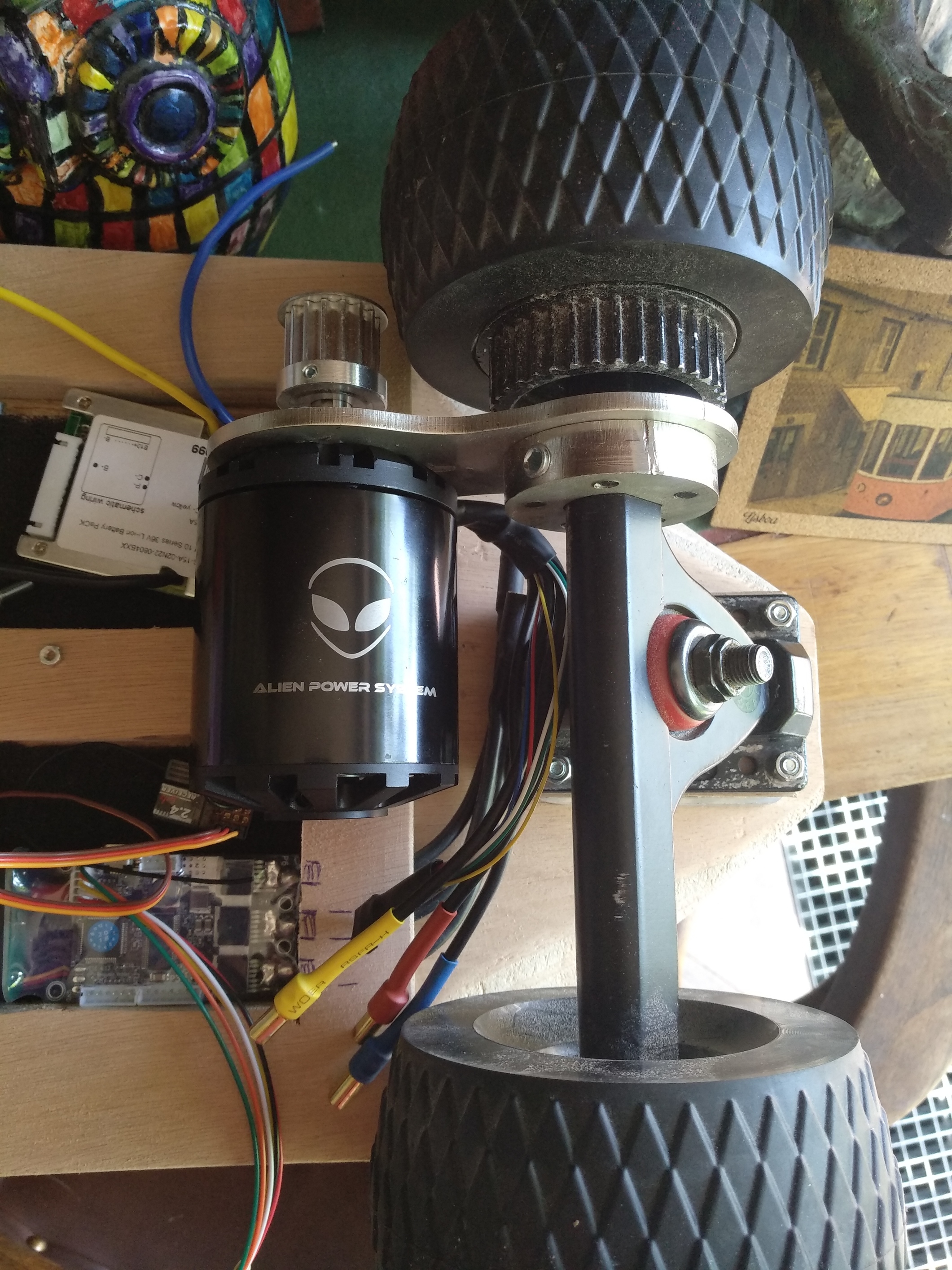 Everything kinda fitted but I didn’t had a spotwelder for my battery so I had to get creative. First I tried with a wire welder which should put around 1000A but I think the voltage was too low for it to work. After that I used a car battery. In total it was a couple of hours spotwelding (very much thinking about how not to blow the stuff). The cells used in this build are 40x Samsung 30Q. After one evening the battery was done and the balancing leads could be soldered. When everything was done I used some shrink-wrap to isolate the battery. I’m very happy about the result. 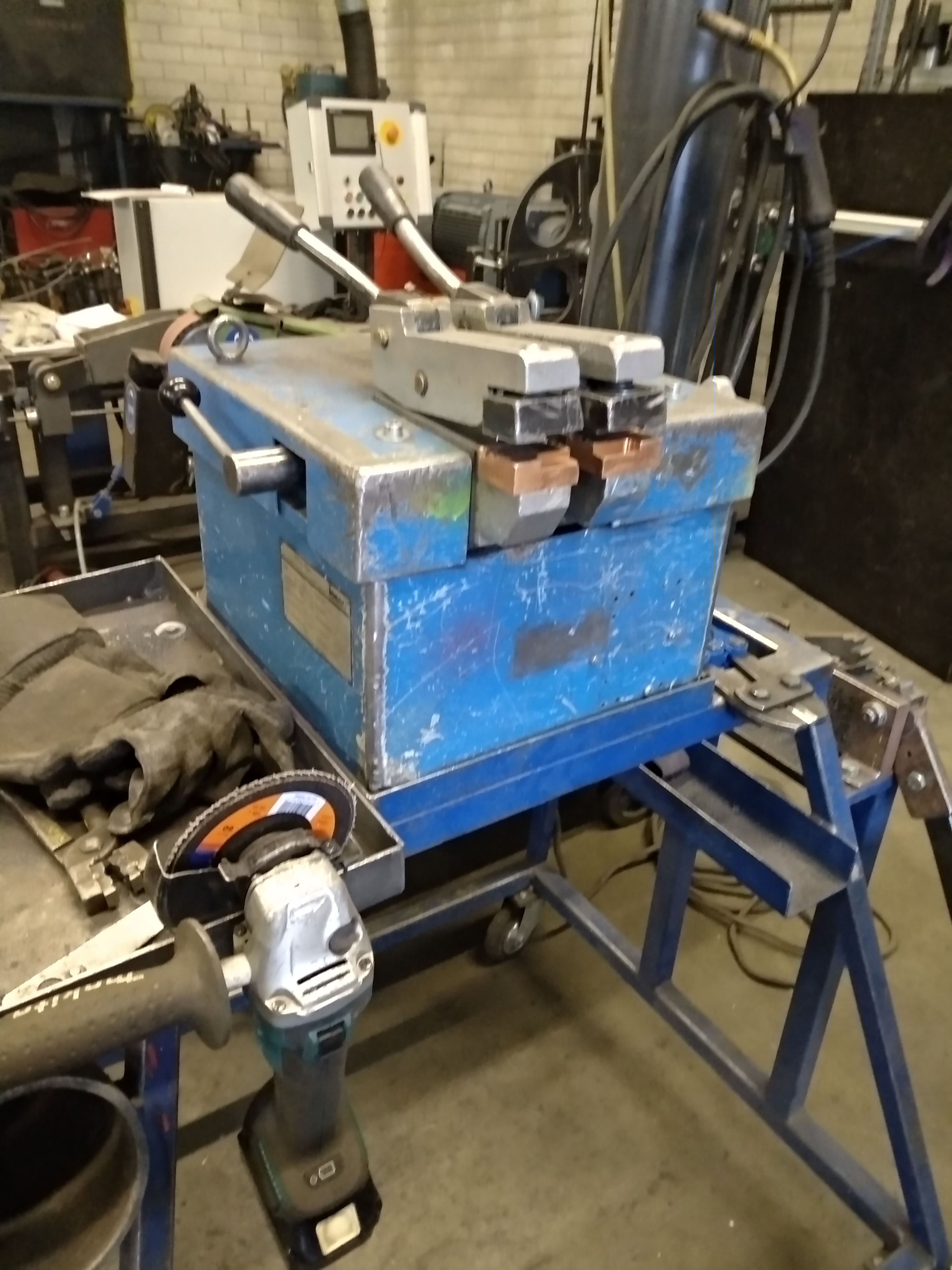 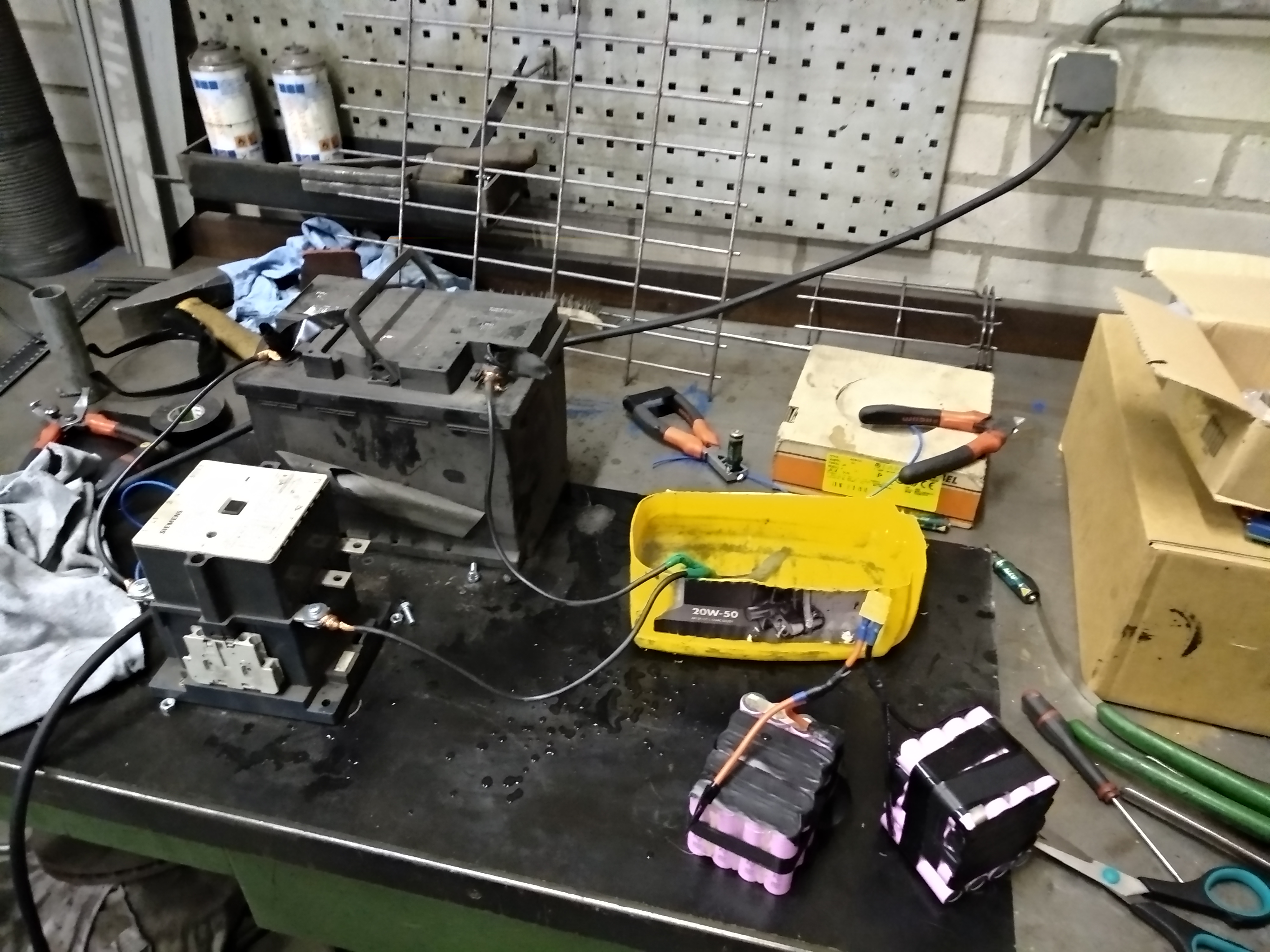 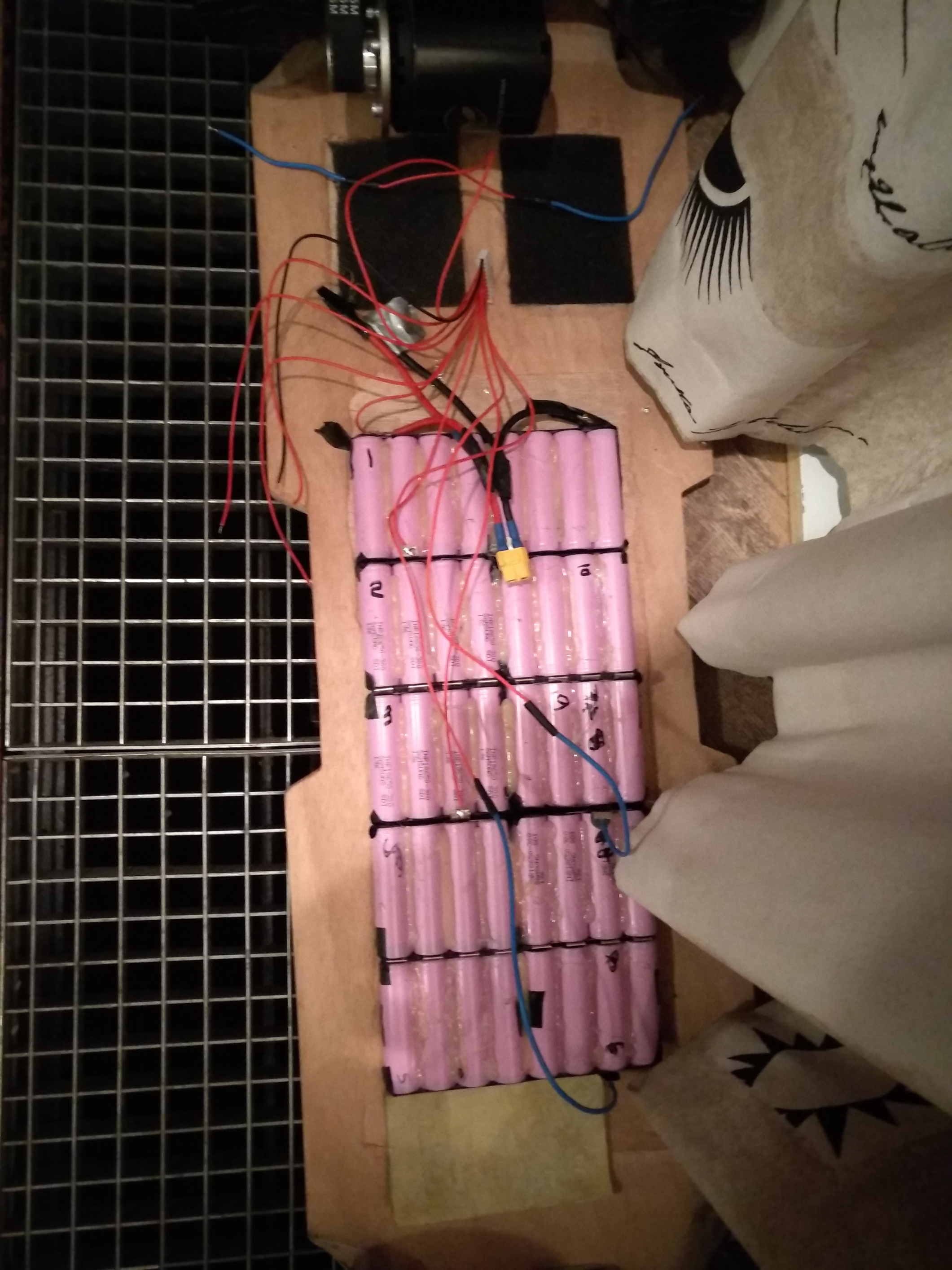 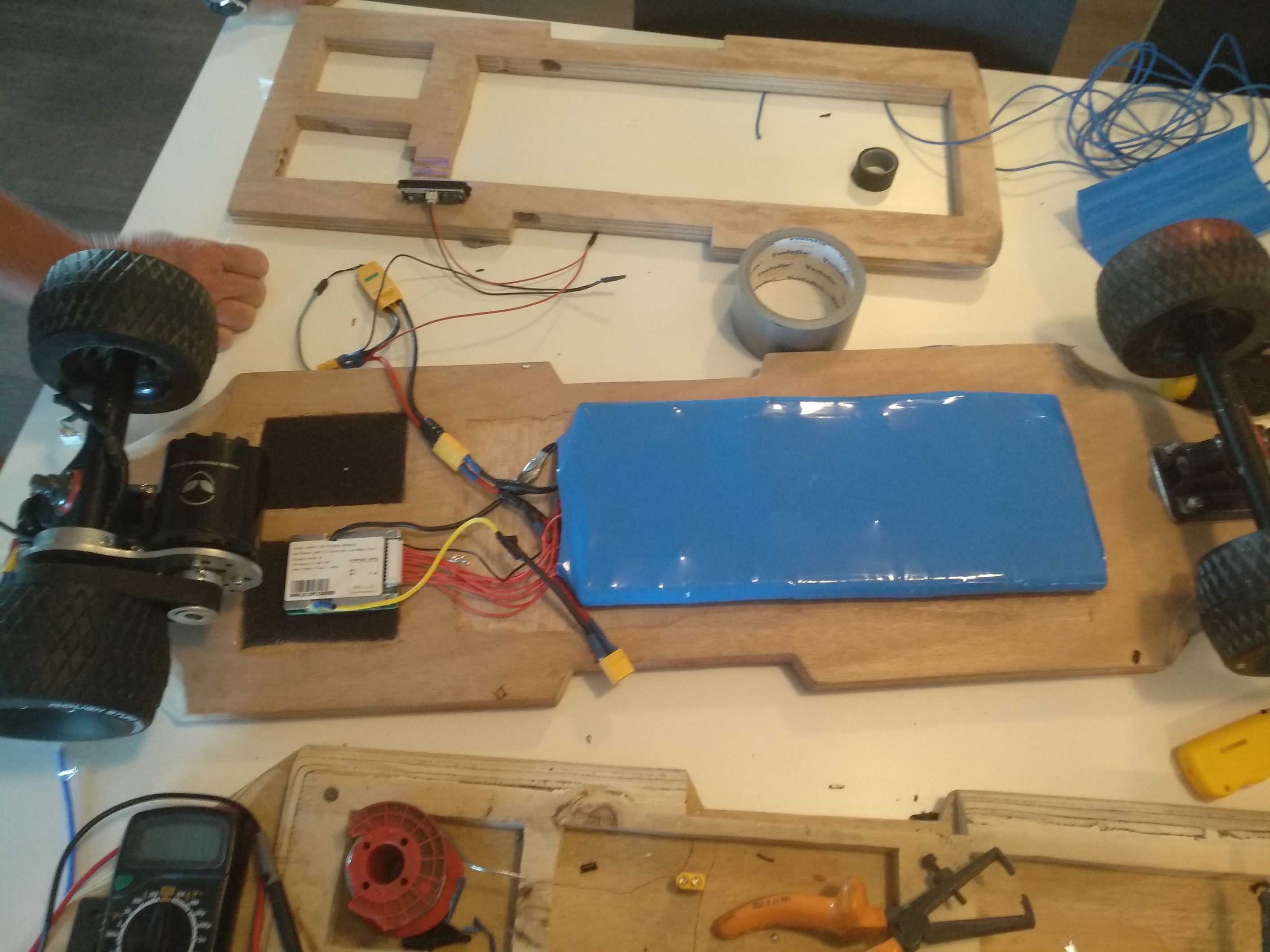 I did tape everything down with ducttape and started testing. When I was testing I blew my first vesc. After being a week disappointed I received a new one from Frédéric. When the new vesc was programmed I could finally do some real riding. My top speed at the moment is 43 km/h but when I double the motor amps (only 25A atm) it should go a lot faster.

I have to say that I am a little proud on my first build: 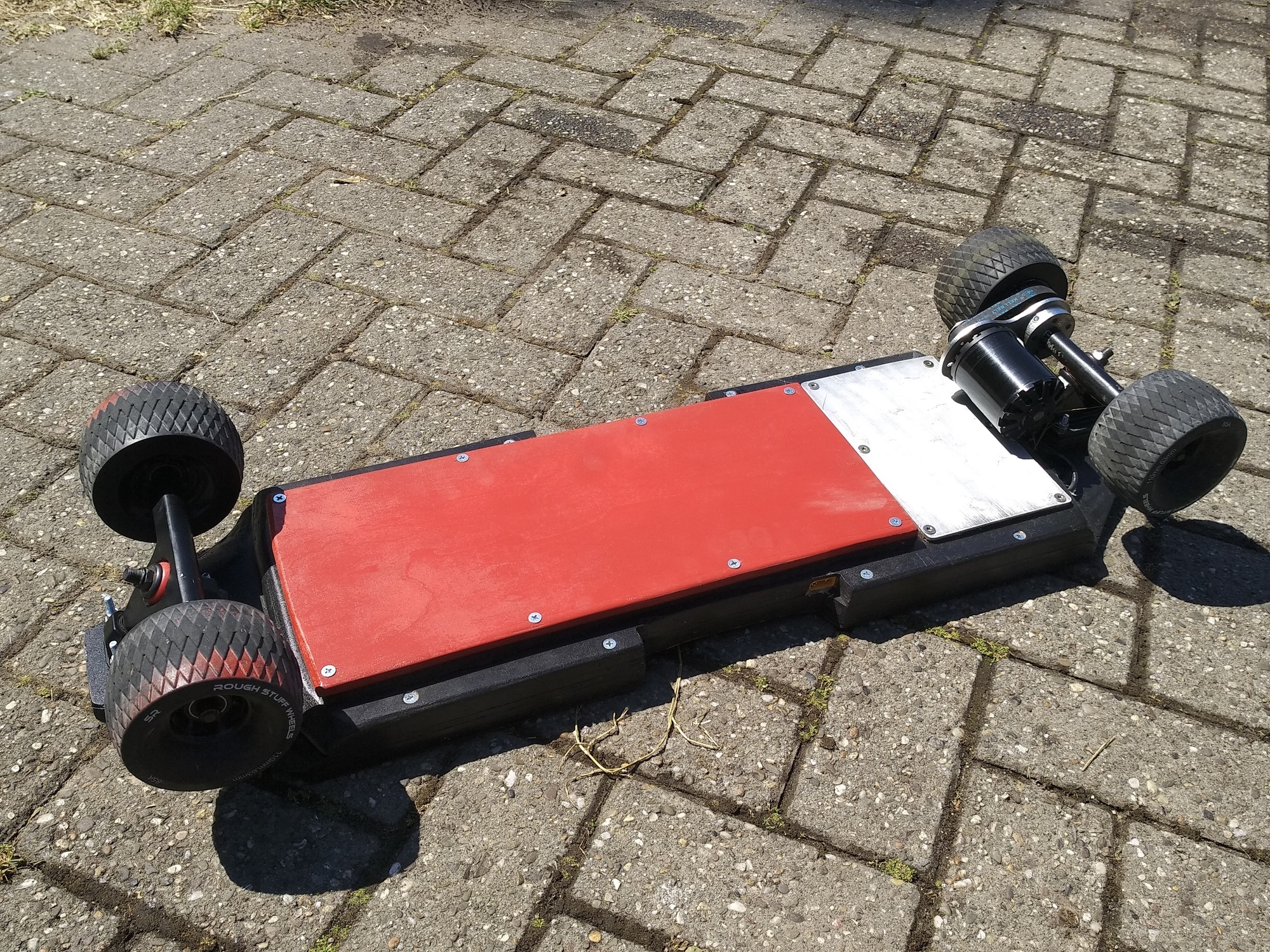 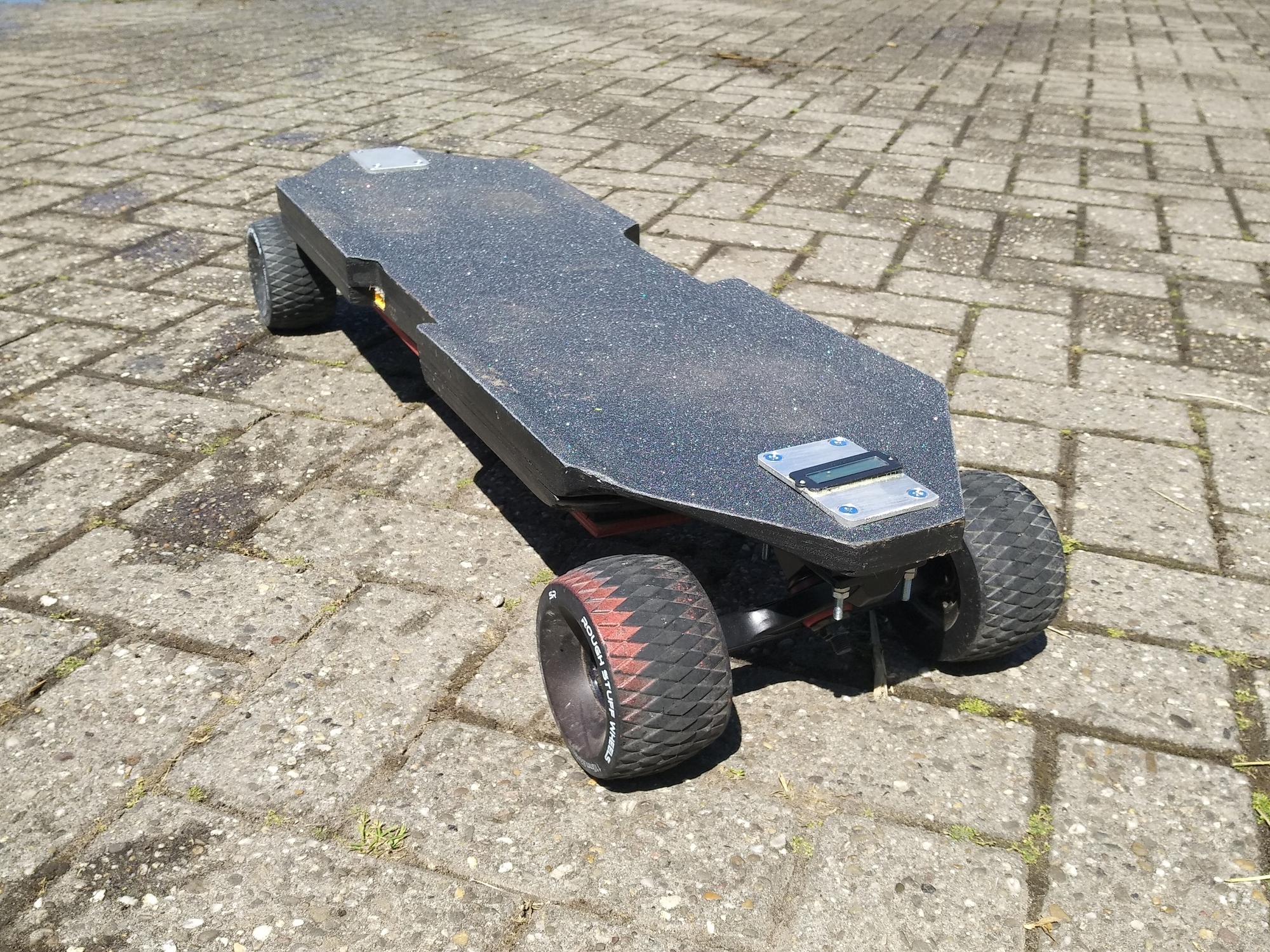 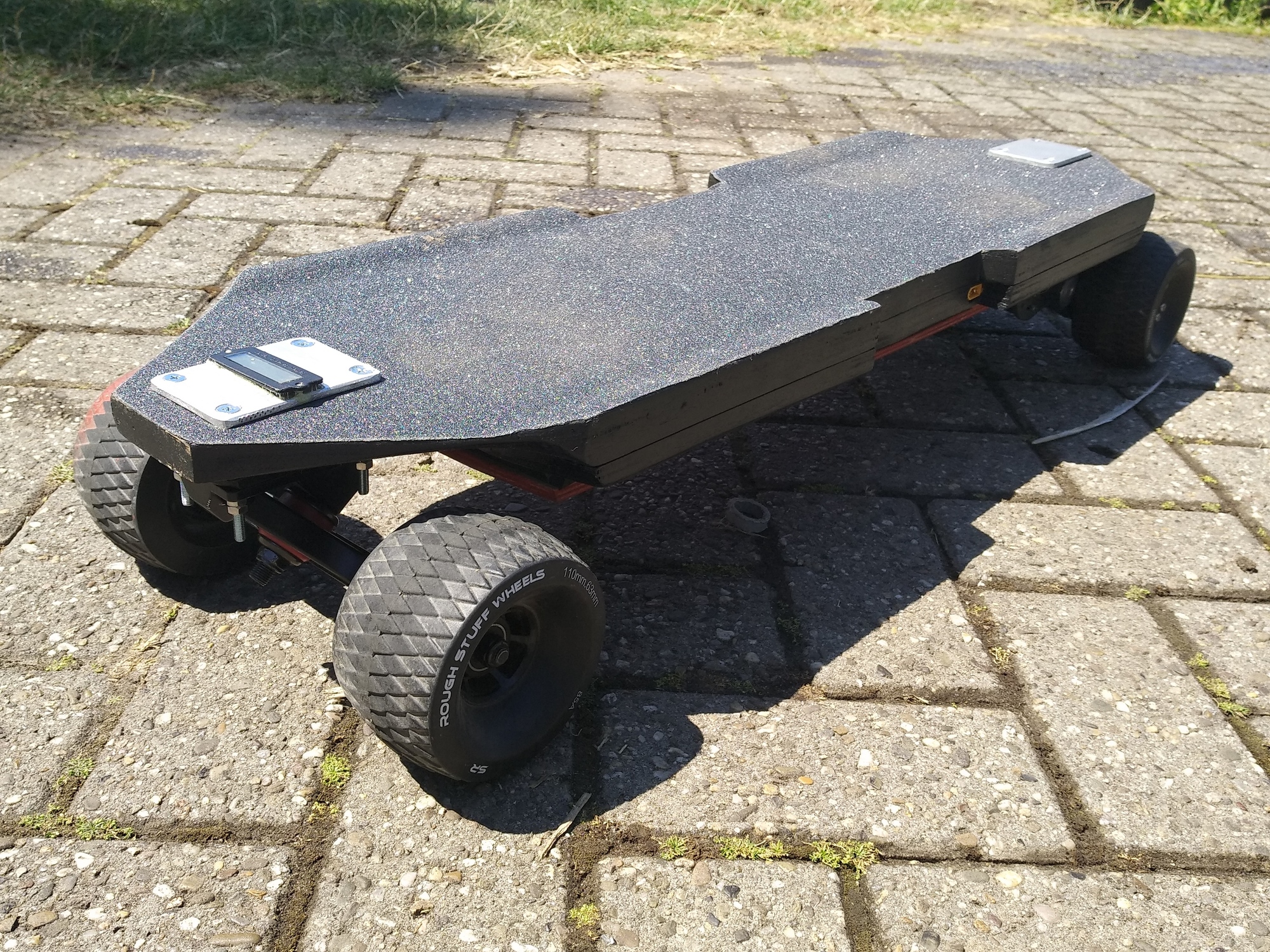 If you have any questions (or tips) feel free to ask.

Why did you blow your VESC? And nice build, mine will be similar!

How can you get a lot faster by doubling the amps? Doubling the amps just means a lot more torque? I mean you would need to increase the voltage or motor KV. 170KV is pretty low for 10s. You could have ordered the APS with a higher (custom made) KV rating.

How do you like those wheels? They didn’t look appealing on Amazon

Lol Those wheels are very hard, try the mbs wheels shaved if you want something that big