Anyone tried this with success?

Why tho? All the engineering is already done. In my opinion, it would a waste of time and effort unless their is some specific reason for making your own wheels. For example making pulleys easier to mount but this too has already been done.

Boston winters are pretty hellish. I rode a Yuneec (expendable) through the snow, sand, and salt and could feel the slippage around corners. I’d like to cast wheels with metal studs or ones that crush a little (airless tire) for better traction.

Thane chemistry is a closely guarded secret by companies. I figure the casting method starts with an aluminum mold which is treated with a release wax or coating and an ABS core. Then you prepare the epoxy + thane and transfer it to the mold to set. Assuming I get a decent machine shop to make my mold, I plan to try my hand at science.

Oh I see you are doing it for SCIENCE! The idea for those snow wheels sounds interesting. Hope you get some good results.

Yep. I can’t find any good articles online and I’d hate to look it up in a database before term starts.

I tried All Terrain wheels (worked reasonably), but they were never meant for eBoards.

@Hummie casts his wheels with BJB enterprises polyurethane. An aluminium mould works but I think you can also use silicone.

I’ve cast ABS and acrylic with silicone molds without issue - the company you linked is the one I use for water-clear castings for part demos.

@Hummie, does the silicon molding require cleaning up afterwards (lathe trimming due to mold warping)?

I know @Hummie makes the urethane covers for his hub motors, you could ask about that

I’ve been casting wheels for robotics for a while now. I used a glass tube as my mould, 3D printed mould base and 3d printed hub.

Prep the moulds with release agent. Pour the urethane Vacuum the mould for 20mins Compress the mould at 40psi for the rest of the cure time (24hrs) So ya, unless you have a real specific need, i wouldn’t bother doing this haha

Professional grade ones do

How about a slow setting epoxy and no vacuum?

The vacuum gets rid of the bubbles, it’s probably not necessary, one can get away with compression alone

Nice wheels Blasto what rubber are you using? I use “cold pour” stuff, the big manufacturers use “hot pour” which gives it better qualities but in my experience the bjb stuff in 80 and 90 duro has great performance characteristics and other than it’s smell it seems practically as good. Maybe less rebound but i havent tested.

compression vs vacuum i’ve wondered about. I have both and have gotten glass clear castings using both together, vacuum the resin first, pour, and set in pressure pot. You’d think the bubbles would expand after the pressure is released as the cured rubber isn’t that hard but nope they’re gone. I generally just vacuum resin before the pour though and have a couple bubbles on the surface. you need a big mold to not overflow the mold if you put the whole thing under vacuum and you have to have had the vacuum made under vacuum as well if you do put it in the vacuum when casting with it

casting wheels like im doing is easy as they dont have a core. If you have to add a core then there’s more complications but polyurethane sticks to polyurethane really well.

try it. it’s time consuming making molds and pouring and you’ll want a decent vacuum or pressure pot but once youve got them and get comfortable making the molds it’s fun and you can make a lot of stuff. making the mold just right becomes a challenge as you want to avoid air bubbles of course and allow the part to come out and have decent pouring and vent holes and make it pourable so yo dont have to stand there the whole time pouring a trickle:expressionless:

I also have cast motor mounts directly on hangers I put in the mold and made battery sleds and lately am going to make a silicone bag for a vacuum infusion. it’s fun stuff silicone and all these resins. smooth-on.com has a lot of great stuff. Some of it cures lightning fast too and you can whip up a mold and pour it in hours.

get hard silicone for the molds if youre doing wheels 45 duro minimum.

the clear polyurethane gasses while curing are much more poisonous and takes a lot longer and harder to get right.

the cost of aluminum molds for wheels is more and if you want a major manufacturer to pour you wheels they require aluminum. but aluminum is not necessary to pour them yourself. manufacturer wanted 7000$ for them to make me 100 aluminum molds that they would pour. 100 is their minimum. then they’d be 4.35$ each wheel.

I use smooth-on vytaflex, shore A20 and A60 depending on the application. Obviously not for a esk8

I have spare wheels(80A duro) with 69mm diameter and was thinking I could cast 10-15mm extra 75A duro urethan surface (depending on tube diameter). Would it hold? I could make some holes or just gash surface of 69mm wheels for better adhere.

My first post here. Hope I can contribute something useful.

I wanted larger wheels and did cast 115mm wheels that glued to my original 90mm wheels. Only have had few rides so far, but they work well. 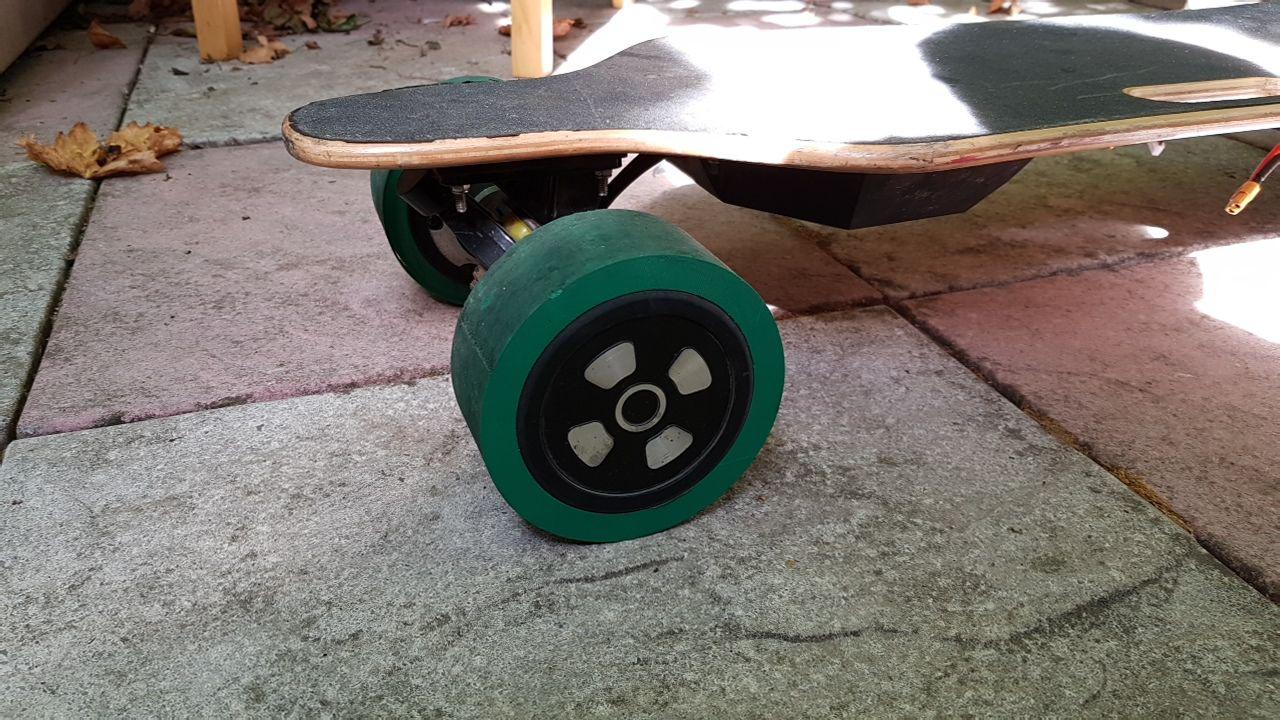 Key here is to pour in the resin, let it set for 60min and take the mould apart with pliers. Do not leave it for too long or it will be hard to remove the mould.

I left it harden for few days and glued to my original wheels. The bonding surface is quite large, so it should hold (I hope!)

very cool! would love to see how well these hold up