This is my latest build. There are still a couple of things to do but its def ridable. I don’t typically do build logs anymore, but I thought this one needed one as it’s the most expensive board I’ve ever built

Here’s the build sheet, so you can see how much money I spent… 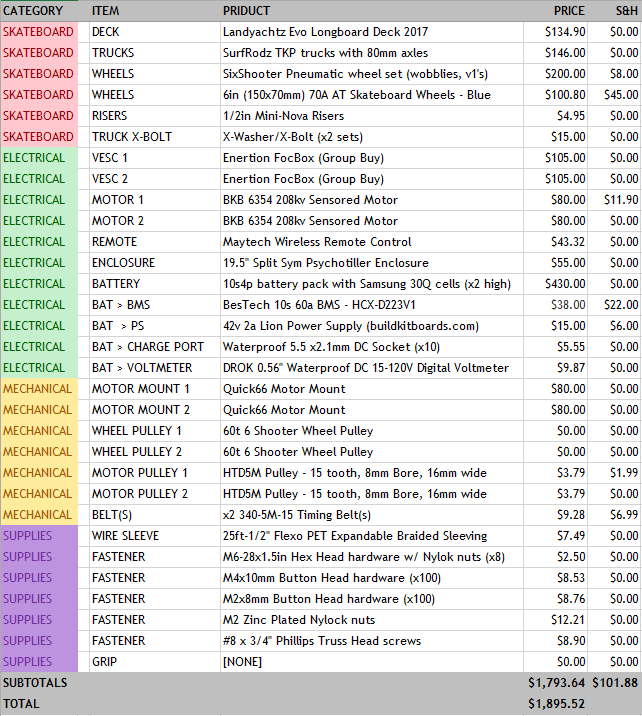 OK, so now to meat and potatoes… Being a world class dumbass who is nevertheless lucky as an irishman I hit 26mph on it yesterday. No vibration at all, no wobble at all, lush. I was a little worried about the geometry of the cutouts, and still can’t say I understand it, but it at least does NOT hurt the ride quality, I assume it helps.

I still have to replace the enclosure I’m using, it’s not deep enough for the battery pack but it will work temporarily. @psychotiller is sending me one, should be here in a few days I will have to replace the volt meter as well, its too thick so the battery keeps hitting the switch. I think I have one that will decrease the space significantly. I’m waiting on new belts, I seem to have misplaced my HTD5M 15x340mm belts, so more are on the way. Currently I’m running 9mm belts as they were here, kinda worried about shredding them though. I thought I might have an issue with the amount of teeth making contact since the pulleys are so close, but it doesn’t seem to be a problem, no slippage at all. Lastly, I need to add a bluetooth module, the one I put in there is not working but its been in 3 or 4 boards so I guess i finally nerf’d it. No worries though, I’ve got a couple more. I did not include heat shrink, wire connectors as I already had them, prolly another $20 or so.

I’ll post some more pics when I get the board completed and get some more ride time.

I’ve got a dumb question

The tires look to be directional, the rears are facing the right way, but the fronts are backwards…

Anyway the main reason for this post, how do they ride vs a regular pneumatic? How is wear?

I hadnt noticed that, Ill check it out and see if there’s a difference. They are grippier than regular nummies but not as smooth a ride. I couldnt say on the wear yet, ive only put 50’ish miles on them so far.

are those pulley’s 3d printed ? Could you share the stl’s if so?

Nope, come on the 6 shooters.

How do you find the deck? Do you like it?

I featured your pic on the banner of the r/electricskateboarding subreddit, hope you don’t mind!

It’s very comfortable. It looks a little wonky but rides great. The concave is a little aggressive but I actually like a deep pocket.

That’s cool, I’ll check it out.

Quick question: aren’t those motor plates upside down? I thought the round half should face downwards to give some protection to the motor.

could be, but I thought it looked cooler like this

yea lol they are definitely supposed to be the other way lol. the circular part is so if you hit a massive curb it doesn’t scrape the shit out of your motor

I featured your pic on the banner of the r/electricskateboarding subreddit, hope you don’t mind!

I’m gonna just go ahead and admit I didn’t read that right apparently and spent 20mins looking for the topic that on reddit that had my board in it…finally realized you said ‘pic’ :).

where did you get the truck extensions?

the 80mm axles came with the trucks from @psychotiller