Well, i dont know how good you are in pcb soldering.

And i would ask @chaka or @jacobbloy if it is likely that orher components are also damaged.

It’s not just you.

Damaging DRV chips whilst not seeming to do anything wrong is so so so frustrating – I wish I had sent my first VESC back to supplier, but at that time supplier did not have the knowledge or facility to troubleshoot and rectify the problem. As the technology was new and I thought of myself as a BETA tester I accepted that this happens and that future development would make the product more robust – I purchased another VESC and had the DRV of the first replaced in UK…VESC is still dead.

I also had tried to run FOC and then returned to BLDC operation.

As I replaced the chip myself I can’t expect the supplier to accept any liability so further cost of investigation and fix will be down to me.

If I purchased a VESC recently and a DRV fault appeared, providing that I had been using within acceptable parameters, it would go back to supplier for diagnosis.

I’ve read around that FOC can be the culprit. But i’ve also read that once it works in FOC it isn’t recommended to go back to BLDC as that’s when the problems begin for many. If I could just find the link…

I’ve heard that a lot of these issues occur after disabling FOC.

Jep me to, switching back from FOC to BLDC seems to cause alot of problems. Since @gamma2 and @dogeatgod dit just that, it might be true.

I kill my both vesc’s after setting foc. Before i try foc they was running perfectly bldc mode. I think foc is not that relieble or dosen’t work well with some motors…

Check the RPM max setting, it was the cause of many of my problem.

Choosing the right motor kv for the VESC Esk8 Electronics

If you have done your research you have probably found a lot of conflicting information about what KV is "best". Often times this information is given without regard to system voltage or electrical rpm limits. The VESC has an ERPM limit of 100,000 but I have found that limit to be closer to 60,000 ERPM. Vedder has stated that running higher than this is inefficient but I have also found that it causes VESC failures. My findings are purely anecdotal and I am not completely sure but a pattern h…

Have you considered trying the Torquesboard 12s Esc?
I’m using them on my dual setup. The are very simple to set up.
I run mine at 100% power with 12s Lipo for max power. Control is very good in my opinion.
I run them hard and they remain very dependable.
I can go 10 miles charging up and down long hills and never have to stop to cool down. Just when my legs get tired. They never cut out on me even when going up steep hills.

I have been trying the FOC and decide to investigate, this is the observation so far :

Running FOC full throttle on 39.5 V for 3 min and monitoring temperature on the BLDC tool. the temperature of the PCB in particular rises faster than the other components, the FETS will eventually cach up to the chip but it seems that the DRV8302 is the one getting destabilized first (by the temperature) causing a heat runaway effect eventually killing the chip.

I have istalled a 35mm fan on the side of the VESC to air cool the system and it works wonders the temperature have been keep under control preventing the runaway effect mention before.

In the short run I’ll keep the fans up. it’s working and I’m enjoying the excellent torque and silent if this device.

By the way i did the same with the TB 12A ESC I burn one and after the autopsy I confirm that it was the issue was the FETS got over heated and the solder melted just enoug that cause a short and provoke a runaway effect that kill that device.

Could you post pictures of the fan on your Vesc? that would be helpul.
thanks mate

position side ways so it can blow air cool all the FETS. It can be power by the VESC too

So it sounds like FOC is the culprit. Ugh. I guess I might as well try with a DRV replacement. Does anyone have a link to place that will ship it relatively quickly? I looked on DigiKey but there’s a couple different types available and I’m not sure which I need.

Iv had so many drv faults some times it’s just the chip it’s self, maybe why ti are fasing them out.

Thank you. Waiting on the pics!! 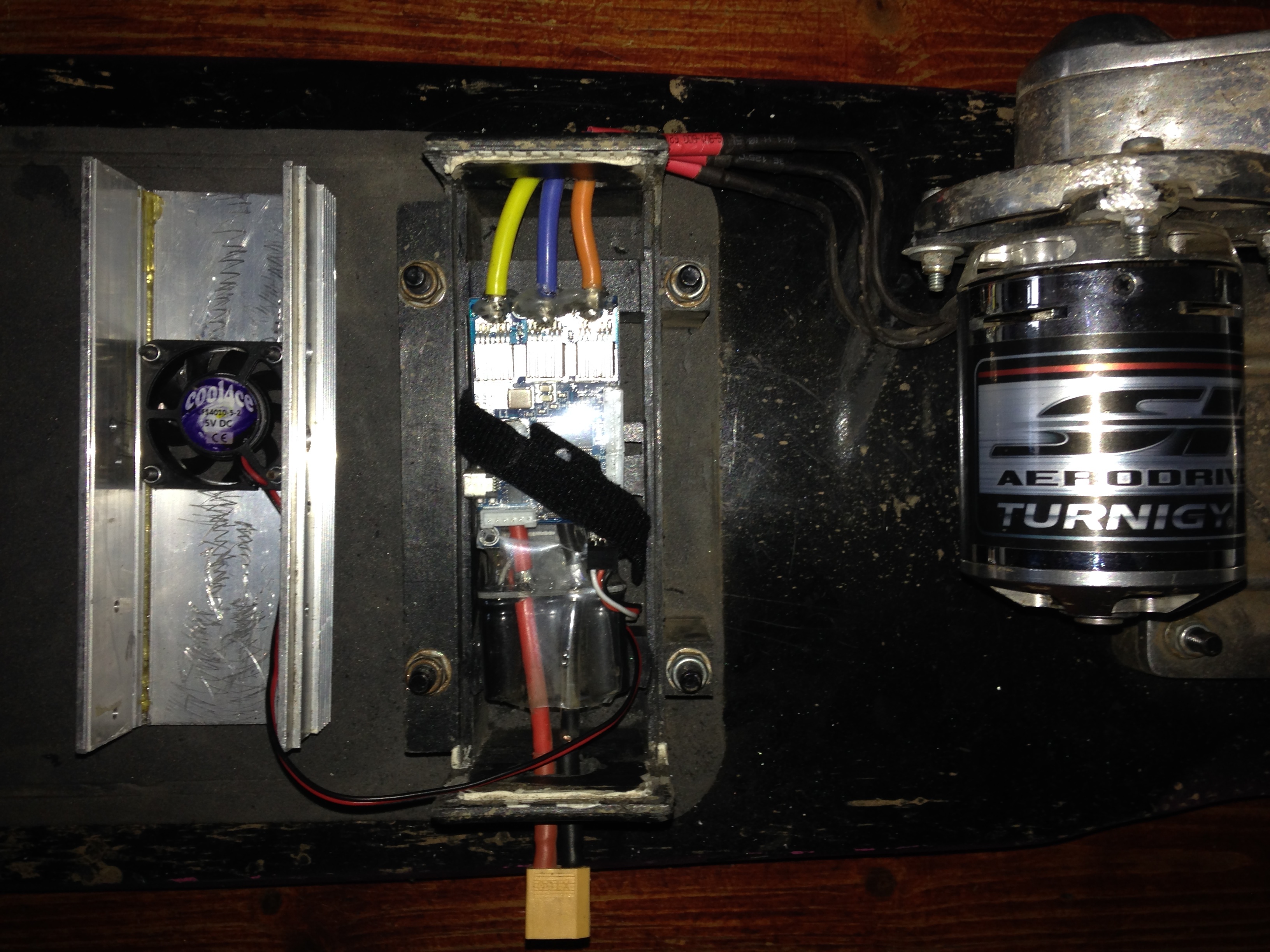 Not sure if that helps - pretty easy to fit

Yes this does help a lot. Thanks for your input.

Where did you find that heat sink/fan set up? What is the voltage of your fan? Are you running it directly from the VESC? If so, where’d you plug-in? I’m researching a heat problem now and really like your approach.