I recently bought a Turnigy 6374-192kv that will attach to the enertion single motor mount PRO kit. In the future I wanted to go dual rear drive but my motor is to big in length so I am going to go in a diagonal configuration. Is this as good for hills as a dual rear drive or not? Should I get a smaller length motor?

IMO I prefer Dual Diagonal for a dual motor setup especially climbing hills and a city with potholes and cracks.

The reason why is simple. There is pull from both the front and rear of your board.

Occasionally, you may come across an uneven pavement. If you have traction on the front but none on the back. The front wheels will still pull you out of the rut and vice versa.

If your dual rear wheel setup get’s stuck on the back. Your board will stop and you’ll have to kick out to get out of it.

Although, this will only happen if you are trying to ride on uneven areas. This was actually a curb which I got stuck on.

However, your board will be heavier and will you use all the extra power? Most likely, not.

Both setups are great it’s just preference. I prefer dual diagonal however when climbing hills.

But i would imagine when braking hard with DD the board would want to turn one way? Is it true?

I suppose it depends on how tight your trucks are.

It seems to depend on truck tightness and if it one belt is tighter than the other (which causes one belt to stop sooner and the other to lag). Not that much of a difference though IMO.

On a side note, I do like to turn the board diagonal a bit when braking. It seems to help braking to a complete stop (since I ride brakes a little less, helps braking at higher top speeds) and the sideways brake stance helps to prevent forward momentum and/or makes leaning back easier.

Benefits of the dual rear is you need less of a wheelbase. You don’t have wire extensions for the second motor on the battery end. With dual rear you get more immediate torque. Dual rear you could pop the front easier. The main downside for dual rear is the uneven traction scenario and the 50-55mm max motor size.

Other then that dual rear would be the obvious winner.

I have made/ridden single, DD, and DR boards. I have even ridden a DR uneven motor config (yeah that’s right. weird hey)

the DD is easily the best config. it allows for 2 large motors to be fitted. acceleration is fantastic, smoothest of all. Doesn’t pull in any one way or the other, and brakes are crazy good. pulls up so fast. Hard carving grip is where DD really excels, there’s no sliding out. (unexpectedly… unless you want to

Speaking of toque steering, when I was running one rear motor briefly it was a 5065 245kv and i didn’t really notice a pull one way or the other. I usually keep my trucks tight and use venom’s 83a double barrels, so that might have had a lot to do with it. When using the big 63’s though, is it really that noticeable? and when in a dual diagonal config, wouldn’t it still cancel itself out? I’ve pretty much committed myself to dual rear configs for builds until i can experiment on dual diagonals more thoroughly.

Usually if there is uneven pull on a dual diagonal it’s usually due to uneven belt tension or actual setup of the drive train. I’ve usually always fixed that issue.

Uneven pull in one direction can be a small thing such as over tightness of the truck and/or uneven bushing.

I haven’t had much fun with dual rear as much since I like dual diagonal that much more but soon. I will.

I don’t think 63mm’s would affect it in anyway. My first board was a Dual Diagonal 6374 SK3 but the board was just too heavy so I switched to 50mm’s. Still awesome though.

have you ever seen any other vehicle for carrying mankind with diagonal setup?

your actually not correct @onloop. most common cars under certain circumstances only drive one wheel. they have a differential that sends the drive to the wheel with the least load. the difference is that they can send the drive to the other wheel in varied percentages depending or corners and loads. etc. (it alot more complicated than that but that’s a simplified version) only cars with LSD (limited slip differentials) drive 2 or more wheels. that’s another story.

Sorry you are wrong… a diff is not designed to drive just one OR the other wheel, it is capable of driving just one wheel - but it is not its purpose and it will rarely happen… unless you prevent one wheel from rotating.

If it only drove one wheel you wouldn’t need a diff at all! You would simple have a single drive vehicle. The diff was invented so that two wheel drive is possible.

It’s designed to split the torque equally between the two wheels unless one wheel loses traction! Then the diff transmits more torque to the wheel with traction. However If both wheels have the same traction / load, which is 95% of a journey in your car, both wheels are being driven equally…

An LSD also drives both wheels. Its just got some additional mechanisms (there are several types/methods) to alter how the torque is transferred in the diff. But in normal operation it splits the torque between both wheels.

I told you its a lot more complicated. I was trying to dumb it down. fact is if you drop the clutch you gonna do a single legger if you don’t have an LSD. its all about load.

Wether you dumbed it down or not your argument is flawed…cars are not one wheel drive (or diagonal drive), they simply have an ability, due to the diff, to transfer torque variably between the drive wheels…

I think the real truth here is that a differential has the ability to drive one or both wheels… but normally it drives both as load is equal across both.

Most common vehicles have 50% or more of the available wheels as drive wheels. And mostly it is either at the front or the back or both. Rarely if ever would it be diagonal.

I will probably never use single drive or diagonal drive on my eboards… Because;

Yeah, I apologise. I didn’t want to start an argument.

Well, as I have witness this on a few occasions I’ll throw it out there…if you have a 2 wheel drive car, Jack up the end with the drive wheels and start it up. Put it in gear and watch as only one wheel spins.

we don’t want to open that can of worms again.

but back on topic, I just want to clarify for everyone, Diagonal Drive boards do not torque steer or brake like everyone seems to assume they do.

But when both wheels have an equal load on them, such as the road, they both are driven.

Cars are not one wheel drive!..

If they where one wheel drive why is there a diff at all? The motor could direct drive the wheel!

If you want to learn about the diff & how it works this is the best video ever made about it… It’s from 1940! 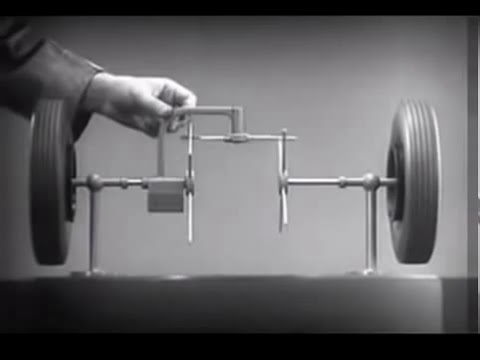 Don’t appologise & don’t feel discouraged… this is an open forum for discussion, it is about learning and sharing facts & knowledge. There will be plenty more discussions in the future where two people don’t agree. It’s our job to openly discuss and “work things out”

Let me just say, It is never a good idea to “dumb” down things for anyone, especially if that blurs the lines between fact & fiction.

It’s everyone’s job on this forum to speak their mind and share there opinions, wether they are right or wrong. Its also everyone’s job to speak up to ensure every post is accurate and true. This is how me all learn.

Not sure why everyone always assumes that the theory of an inside an outside difference in wheel speed even exists with skateboarding…Your board (on any traditional skate truck turns from the center at the kingpin. You can turn your truck as sharp or as little as you like, but both of your wheels will turn at the same exact speed. The reason a car needs a differential is because of the fact that the wheels don’t turn at a single point in the center of the axle. They turn individually on spindles, creating 2 individual turn radius’.

Also, because of this ^ it doesn’t matter how you mount your motor or motors. There isn’t going to be a pull to one side or the other. It’s not possible.

Man… sorry but I have to disagree with you.

As long as the wheels are separated by an axle, and are rolling on two adjacent lines one wheel MUST spin faster than the other wheel at some point when making a turn.

However I think it is worth noting that on a skateboard this might not be noticeable or measurable, due to two things.

In terms of the Diagonal Drive Discussion, this is what I believe happens.