So I have a motorcycle (2007 Suzuki Boulevard S40, 650cc single cylinder engine) which I’ve modified into a cafe racer style bike, and one of the mods I made was to not only replace the bikes heavy ass lead acid battery with an incredibly small and light LiFePO4 with built in BMS, but I also fabricated a small space to hide it. Currently though, I need to get a new one, but I figured it would be possible for me to make it myself, and use Li-on 18650 or maybe the newer 21700 sized cells, instead of the A123 26650 LiFePO4 cells to save further space, and probably save some money as well.

So I was hoping someone on the forum here might have suggestions on the cells I should use and in which configuration, so that it will either meet, or exceed the power of the original battery I was using; an EarthX ETX18B. 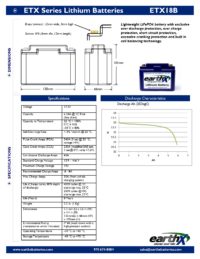 I haven’t opened the battery up, but I think it’s a 4s3p, but I’m not 100%sure on that… I do know it uses the A123 26650 cells, so with the new 21700 cells now available, I was thinking I could use the new Samsung 30T or 40T in the same configuration and hopefully end up with a more powerful, yet smaller and lighter battery this way. It also has a built in BMS, so suggestions on which of those might be a good choice would also be helpful. I don’t imagine I could salvage that from the battery I’m replacing (or could I?).

Lastly, I think I should mention that the battery I have, and was using apperantly was not the recommended one according to the sales people. I was using the battery that’s a size smaller, I think by one less parallel group. It was the ETX12A, which I’m almost positive was a 4s2p. It never really gave me any problems, but it did not last as long as it should have, so that’s probably why I need the larger size with the extra P group. Here a pic of that batteries stats along with link.

The ETX12A EarthX dirt bike lithium battery has 220 Peak Cranking Amps in a package that is just over a pound! Comes complete with a battery management system too! 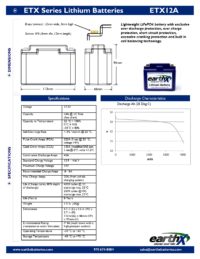 As always, any help would be greatly appreciated! Thank you!

Other chemistries beside LiFePO4 will not outlast LiFePO4 in terms of cycle life. It seems like you need a lighter 12V battery using lithium chemistry. LiFePO4 has a nominal 3.3V per cell. Other lithium chemistries will have a nominal 3.7V per cell. I’m assuming you aim to have a battery that can last as long as 4000 cycles as stated in the spec sheet. If you want this specification for battery longevity, the Samsung 30T or 40T you mention will not last as long as the LiFePO4 chemistry. I’m focusing more on chemistry. The number of cells in series and parallel are easy to figure out once you decide what you want.

Hmm I didn’t even think about cycle life, lol. About how many would you think I’d get from the Samsung cells?

I’m pretty sure it’s 4s3p, but what confused me was the stats for like, cold cranking amps, like I don’t know how that’s calculated. I know I could just use the cells they use, the A123 26650, but they’re like $10/cell and now the Samsung cells are like the same cost. I’m not terribly concerned about having 4000 cycles though. I’m just trying to fix it up a bit and I gotta trade it in for a car

Obviously I don’t want it to be like 500 cycles cause I don’t want to sell it to someone and have it stop working soon after, lol.

The thing is the A123 cells produce 70a easily. Li-ion cells can’t do that yet and will not last very long if it is tried

But so can the 30T, it’s 35amps and if I’m doing 3p, then it’s even easier, plus their much smaller. Lol if I end up going with the A123 cells I’ll probably just buy the battery from earthx