Eboard strap / belt. Don't loose board under your feet!

What do you think? Kind of clever… had not seen something like this before.

Saw that too. Guy got reamed there. A good theory, but the implementation is kind of suicidal.

Most common thing to happen is your board hits a bump or otherwise slows down unexpectedly leaving you to either run off or fall ahead of your board. In this case, if you try to run off, you now have your board tugging you back which may lead to you streeting your face anyway. If you try to stay on your board anyway with this system, I can see you having enough forward momentum to lift the back of the board and having a direct street to face experience.

Get some snowboarding straps. They help so much and I can still bail easily cuz im not strapped from the back of my foot and can slip right out. Also helps when short stopping for random things. And if i encounter a huge pothole i can usually jump it. I been riding like this for almost a year trust me its the only way to ride. 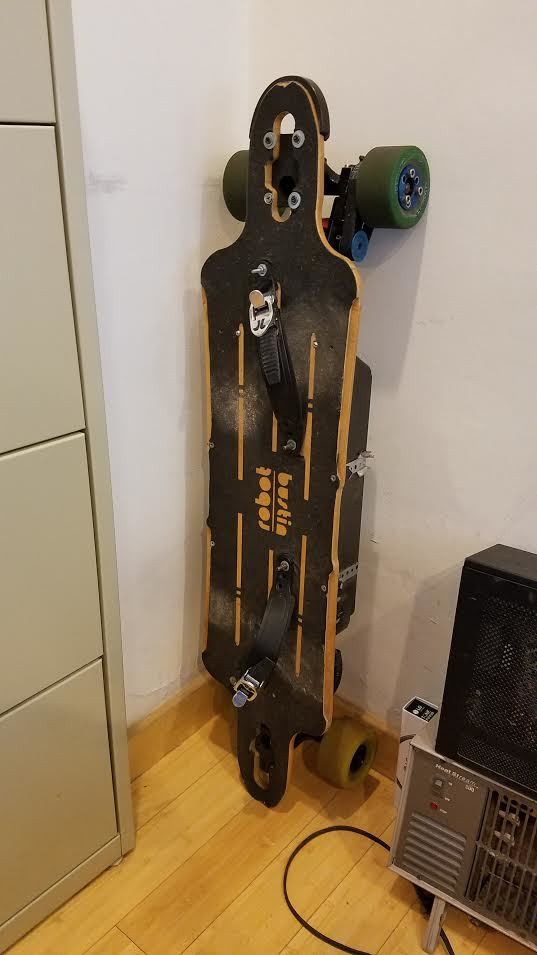 @Mikeomania12 Yeah, this is a nice implementation for longboard… mountainboards usually come in stock with some bindings already…

@Jinra agree with you, it’s kind of two sided… there will be situations when this strap can become your worst nightmare… in my opinion this may only help if you are still learning how to brake properly… so that you dont get thrown off to the front…

This is a real thing?? I thought it was a joke.

You can scroll down the comments section, it is quite busy there… but he posted a demo video on him jumping with the board indoors etc… Well… of course it looks a little bit off … but hey someone has tried to solve a problem diy style… he even shared the links on where to obtain the strap / belt…

that fb page doesn’t exist anymore it looks like. I don’t see how this would work, if anything it makes it even more dangerous because now you can’t run off your momentum. Also a lot of falls are due to speed wobbles. Most falls are NOT due to very powerful brakes throwing you off, it’s because the braking causes you to lose your balance and you end up wobbling and falling off. This seems to make it more dangerous.

Ok, thanks for the update…

Nicely done. I’m trying to figure out how to adapt some old snowboard bindings using the baseplates and all, but this looks like a better, much simpler solution. On my to do list now. Thanks!

I’ve been testing the Freebord bindings, they’re a good medium. Allows to have more control and such, but you can slide your feet out without any worries.

NOOOOOOoooooo, the strap is a horrible idea!! Let me explain: I have one fairly noticeable scar that runs from just above my left eyebrow down the left side of my nose, and it’s entirely because of a bloody “strap” lol. See a few years ago I had a mountainboard with one of those handheld brakes hardwired via a cable from the back wheels. I had constructed this pretty decent sized ramp at the top of an already sloped field which led into a table-top kicker/landing scenario. The first day I was loving it, hitting the jump over and over with growing confidence each time. Having the 4 wheels made sticking the landing far easier than say on a snowboard, so much so that I grew tried of holding this hand-brake as I never used it, rather opting for a slide as I was on grass after all. Day two everything changed, woke up early and took the quad up the field holding the board dog in tow, stood at the top admiring my handy-work from the day before as I hooked the rear wheels over the top of the run up to secure it and clambered up the ramp and got into position on the board, looking down the ramp I felt so confident after yesterdays consistent airs that I decided to put the hand brake in my pocket, the most stupid thing I could have done… So I raised my back foot allowing the rear wheels to unhook and begin my decent down the ramp towards the kicker when my dog ran across my path, I swerved to avoid him but ended up half hitting the kicker and landing in a grind on the landing slope, the board stuck like hitting glue and I attempted to dive/role forwards onto the grass, which seemed to work, until I looked back and my board which had been swung in a big arc at the end of this cable (brakes in my pocket remember) smacked me in the face LOL now I laugh, but then… not so much.