My solution to living in off campus apartments and avoiding the bus: The Electric Sportster! 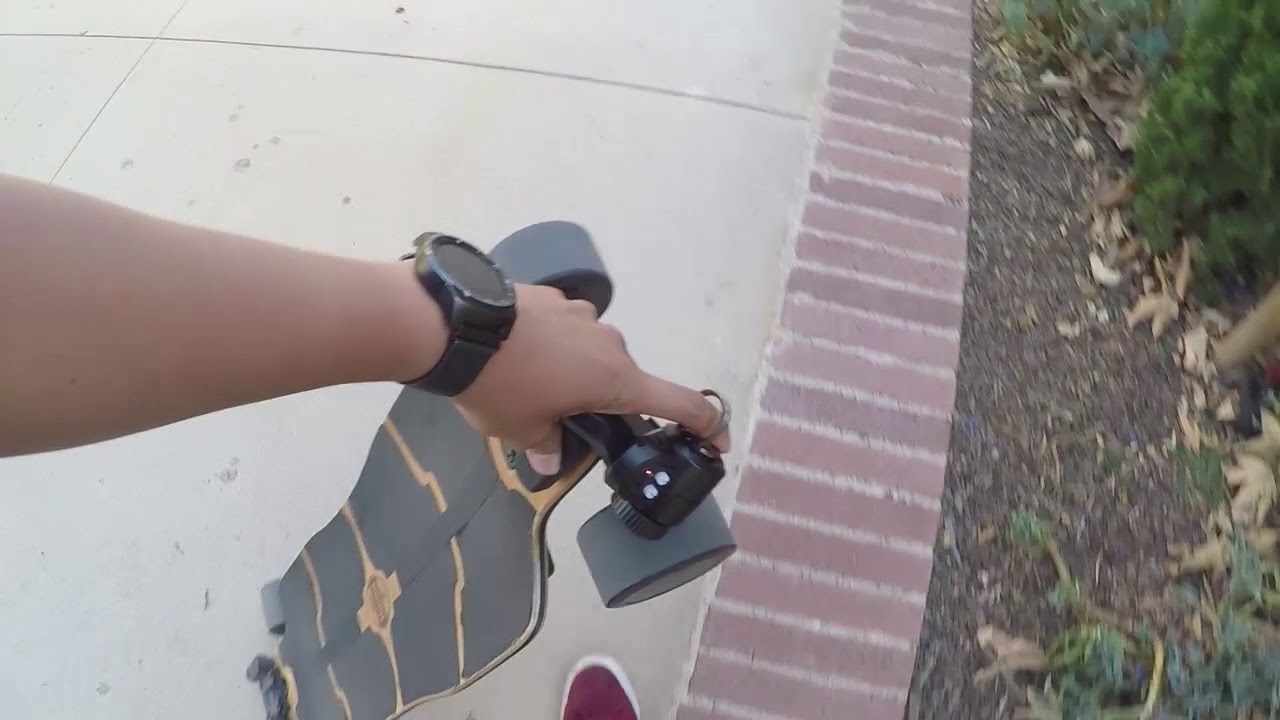 Here is a first person point of view of using the Electric Sportster. In the first run, I’m using just the throttle to accelerate and control my speed, finally braking at the end of the path. After turning the board around, I don’t press anything on the remote and kick start. Then, I activate “Cruise Control with Braking” which applies propulsion and braking in order to maintain speed. I then use the throttle to gain speed, which deactivates cruise control mode. This drops power from whatever it was using to maintain my speed as the throttle moves from 0% up to the power defined by the throttle. Then I activate “Cruise Control with Braking Disabled” which allows the board to increase speed either by kicking like in the video or when going downhill. However, when kicking to increase speed, it is better to release cruise control and reactivate after kicking to the speed you want. 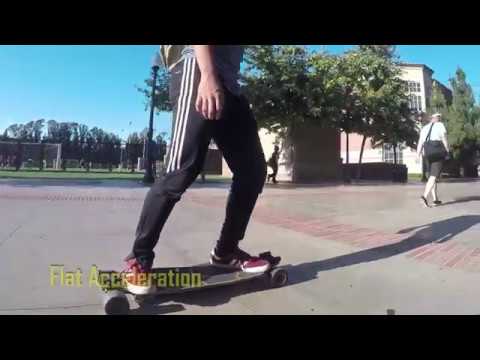 Here is a demo of the acceleration, speed, and hill-climbing capabilities of the Electric Sportster. I was not using full throttle in any of these tests however because I’m still inexperienced with the amount of power the motors are capable of, so all the demos were done within my comfort levels rather than at the maximum capabilities of the board. Non-Abrasive Rubber Griptape that grips like sandpaper but won't rip your shoes. Your shoes will Thank You! image.jpg6016×4000 1.52 MB
After first removing the existing griptape from the deck, I drilled holes just big enough for a press fit of the T-Nuts into the top of the deck and used the enclosure bolts and washers to fully install the T-Nuts. Here is a more in-depth explanation of how to install T-Nuts https://www.youtube.com/watch?v=HVfkxJiqLkA (YT: Installing T-Nuts In Wood | Fasteners101) To replace the griptape, I used non-abrasive griptape from DKL Skateboarding to avoid any more damage to shoes and pants that come from regular griptape. Here is my attempt at recreating the original griptape pattern that came with the board. Because the sheet of DKL griptape was not as wide as the board, I decided to include a gap in the center so the griptape could reach all the way across the board. The battery I chose was the 12s2p battery from . In order to fully utilize the high torque of my motors, I needed to use a high voltage, which is why I decided to get a battery with 12 cells in series over 6 cells. The battery from also came with an enclosure, which meant I didn’t have to make that myself. The battery includes an XT90 connector, 2 USB charging ports for devices like cell phones or the Shredlights, an on-off switch, and a charging port. Sadly, I discovered that when going over sharp bumps that hit the bottom of my board, the switch gets hit and the board shuts off, and the charging port cover has been broken off. When I am more able to make my own enclosure, I plan on getting a 12s2p Stealth Pack from Miami Electric Boards and installing a charging port and on-off switch on the side of the board, leaving the bottom completely flat. Here is the enclosure for the battery and electronics. I hot glued 2 nuts on the bottom of the battery so that the charging port doesn’t get stuck beneath the top of the enclosure, inaccessible to the charger. The enclosure came with velcro straps and rubber tubing to better weatherproof the battery and electronics inside. Here is the battery installed into the enclosure and secured with the straps. With the leftover space I could just snugly fit the 2 VESCs that control the motors along with the RC receiver. I drilled 2 additional holes in the enclosure so the VESC Sensor Wires could also get through to the motors. The motor setup I am using is a dual hub motor drive with 90mm wheels. The motor is rated at 75kv, which handles inclines better than the higher kv version also available, meant for 6s batteries. I applied Loctite onto the bolts, however some did end up getting applied to the inside of the hole for the bolt before it reached the threaded part, so I put a little extra just in case. I also applied Loctite to the bolts that secure the motor onto the trucks. Here is the battery enclosure installed with the large bolts, which also have Loctite applied for more security. If the motors go backwards when you push the throttle to go forward, just swap any 2 phase wires and run the detection with the BLDC tool again. With the front and rear Shredlights installed, the build is complete! The clearance isn’t too bad. Just need to work on an enclosure for those excess wires now…

You should probably just cut the wires and resolder the connectors so they fit better with your setup. Are the front trucks narrower than the hubs? Or is that an optical illusion.

Yeah Dexters hubs are significantly wider than normal wheels, I’d say at least a 1/2 inch on either side. It’s definitely noticeable but doesn’t seem to have remarkable downsides.

Great job on the build by the way! I love Bustin decks.

Those hubs man! So quiet!

In the video, I have my wires just wrapped in bubble wrap and taped to the deck

@AssaultedPotato How is running FOC with the torque boards vesc? Have you run into any problems with it?

Damn, sorry to hear that. Did you end up fixing them or upgrading to different VESCs?

I’ve been trying to decide if I want to run FOC on my torque boards vesc. Everyone told me not to and I guess this is my final confirmation. Time for me to get a FOCbox.

I got the Ollin VESCs, but one of the hub motors shorted where the wire comes really close to the shaft, and a vesc burned out… So I’m waiting on a motor and a VESC and I’m just using another normal longboard I have

How do you like that DKL grip tape ? How would you compare it to regular grip ? I’ve used various non abrasive grips in the past but would like to know more about this brand.

Because of how I applied it in pieces, it peeled a lot around the edges, but I’m going to give it another try with just a continuous sheet.

Does it really feel like the same grip as regular grip tape ?

Nice board… I think it should be added to http://esk8builds.com site… at least I think I havent seen it there

Do you get any wheelbite issues? Planning a sportster build myself with Kegels. I also got the torqueboards 12s2p. The casing is said to be 8.3" which when I tried to model it in cad, was too wide for the deck at the middle. Can you confirm the width of the TB case?

No wheelbite, and the 12s2p enclosure should fit width-wise. The only issue is that you have to really press down on the edges to secure the enclosure because of the concave of the board.

@AssaultedPotato So you’ve got it back up and running now? We should go ride next quarter, I’m curious to compare the hubs to a belt drive

Hey man, Torqueboards has changed the design of the 12s2p enclosure as I too used this thread to help with sizing but had been told they had updated the design. Just thought I’d let you know just in case it didn’t fit.