So, I am using @psychotiller’s 405 enclosure, but the concaveness of my deck is very deep, so when I place my battery on the deck and try to fit the enclosure on there is about a 3/8ths-inch gap between the enclosure and deck. Because of how big the battery is I can’t really flex the enclosure enough to seal it. I wanted to get some suggestions on how to fill this gap. Any input would be appreciated, thanks! I have attached photos. 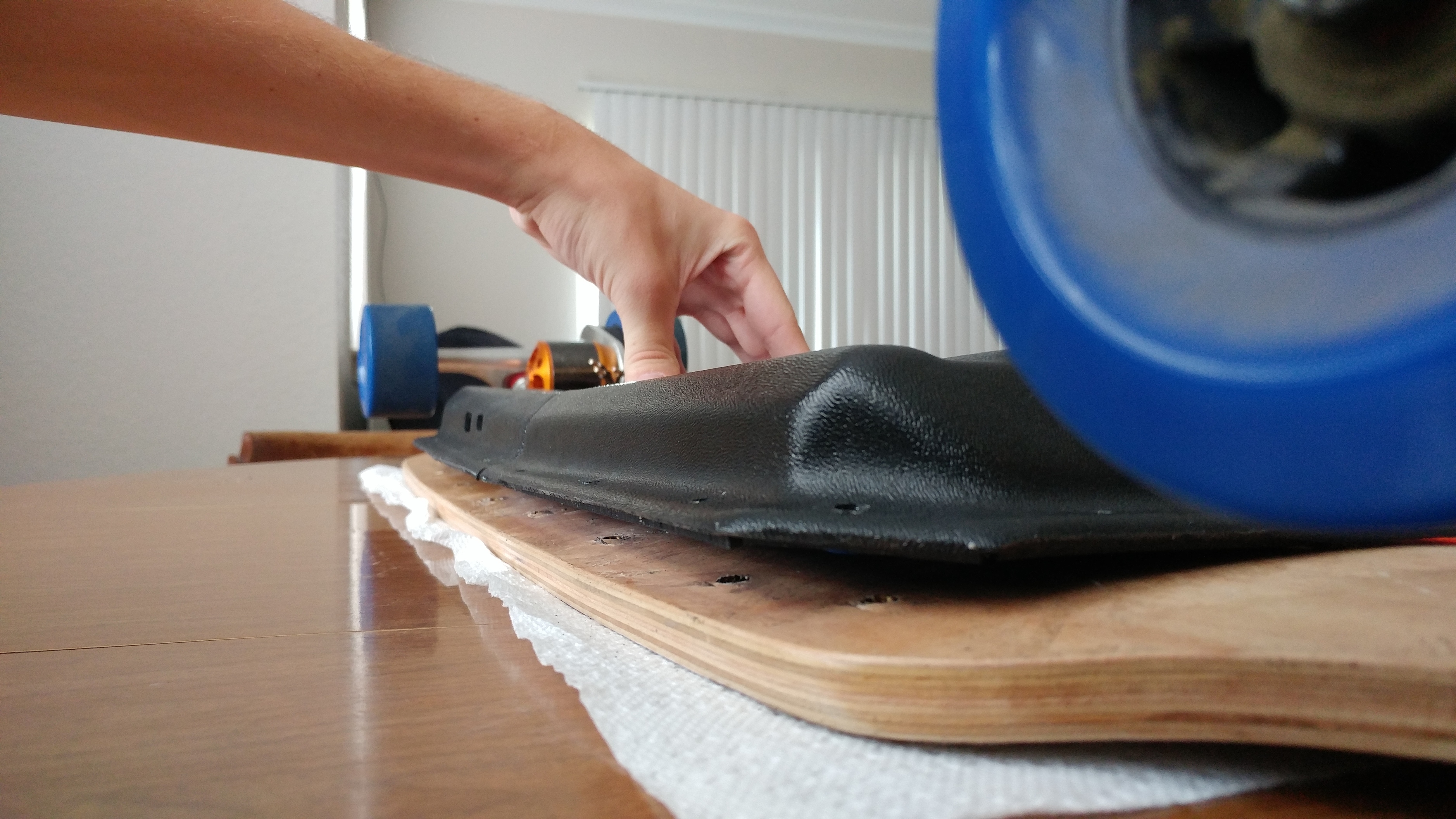 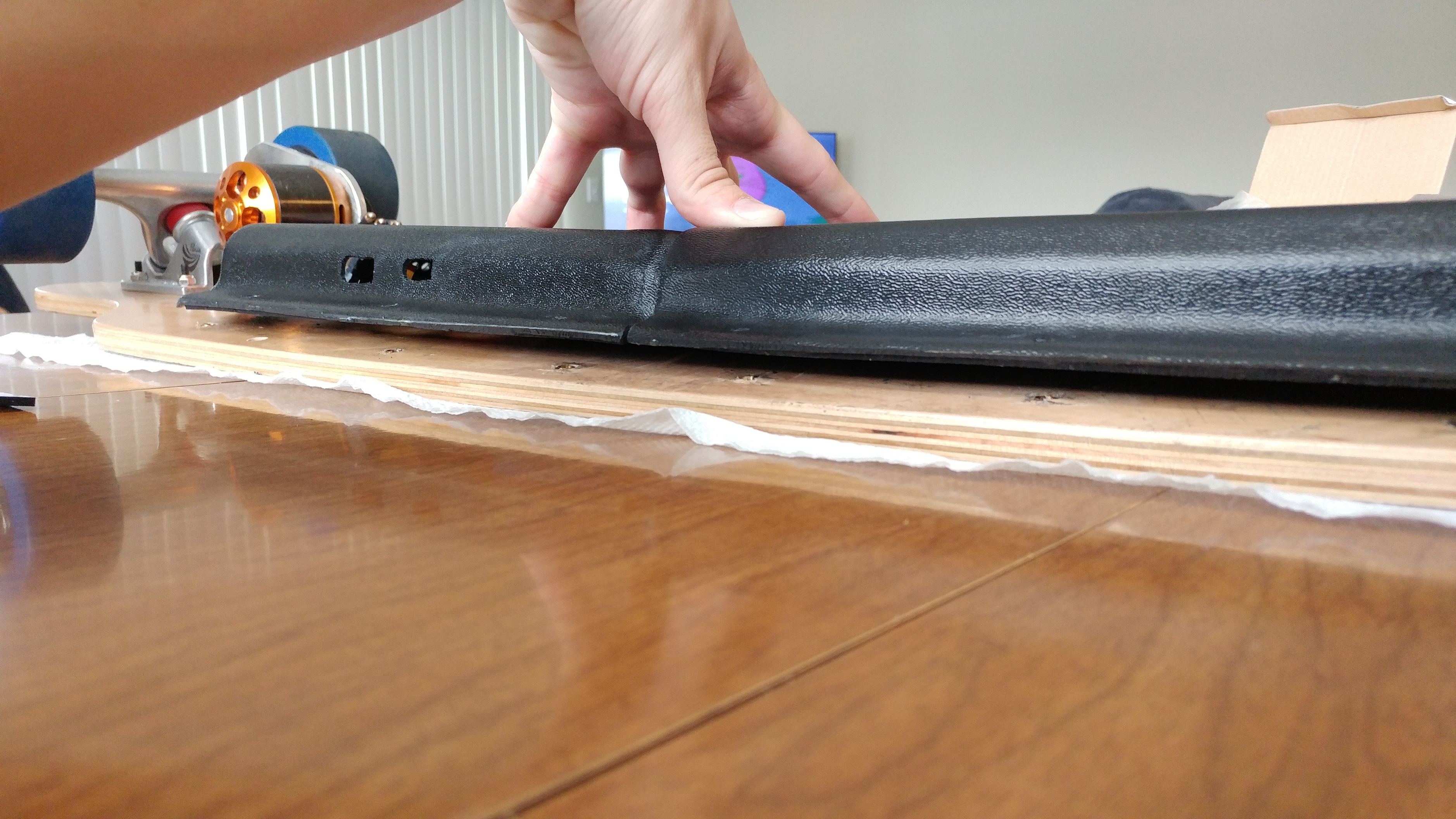 You could make some kind of silicone or rubber gasket?

I have some extra 1/40-inch neoprene I could use, but that would compress so I would need to use 2-3 layers.

Cut a wooden spacer out using a router and then glue it to the deck?

If you physically can’t flex it down because the battery is too big and won’t allow the movement then you could do this but it is a pretty extreme fix and you would have to drill the fixing holes through too.

So the other night I was dealing with a tough problem on a “commuter” build I’m working on. I couldn’t figure out how to mate the Enerion enclosure I got with a battery to a cool Skateshred deck with rocker and funny concave. There just wasn’t an...

I could use some 1/4-inch ABS instead and epoxy it to the enclosure side. I already have the threaded inserts in the board, so I don’t want to get any glue in them.

Heat gun bruv. Screw the enclosure down to snug. Start heating one end until you can completely screw down the enclosure. Repeat on other end and let cool.

Don’t think the battery will let him do that judging by the post. Those tiller enclosures shape well with heat though.
@butt_stallion have you thought about a printed riser? Access to a printer?

My brother actually just ordered a printer, so I will have access to one soon.

That would be the go. Maybe have to do it in two halves but I reckon thats the easiest way out. Include the screw holes and foam edge it and you’re done. good luck with it and keep us posted.

Definitely! This was (and hopefully is) the last obstacle before the board is ready to ride.

I had 3dhubs do a 10mm riser for an old build and they source local and turned it around in 3 days for me to pick up. I now just use the company direct. another option if you’re as impatient as me.

dude…Mount the enclosure. The abs flexes. All of your pics show an enclosure with no mount hardware even trying to flex the flanges towards the deck. I’d have that board buttoned up in like 5 minutes.

Nothing to see here.

Whoop dere it is

I realize the abs flexes, but because the battery doesn’t flex I physically cannot flex the enclosure enough for it to reach the deck.

Hmmm…The gap I see in your pics is nothing. wouldn’t even be a concern here in the shop.

Well you have a more experience than me, I just didn’t want to run the risk of breaking my battery because I was trying to force the enclosure on.

If you place velcro along the sides of the bottom of your battery, it will cradle the concave of your deck. Then that wouldn’t be a concern either. Though I don’t know how your pack was constructed.

I had already placed the velcro along the sides when the picture was taken. I’ll take your advice and mount it up then.