I cannot ever recall a company that is so open and honest as well as owning up to their growing pains. His passion & dedication to making each and everyone of us a satisfied customer is to be commended. I applaud him and respect him and wish you much success. Cheers and all the best!

I couldn’t agree more. It was a large part of the reason why I selected the Raptor over other boards.

Just curious, those have used their boards, what kind of operating range are you getting with the remote? Presently, I have to stay within about 2-3 feet of the electronics to get a consistent signal (in other words, I can’t hold the remote in front of me, I have to hang my arm down - I’m 6’1").

I cannot ever recall a company that is so open and honest as well as owning up to their growing pains. His passion & dedication to making each and everyone of us a satisfied customer is to be commended. I applaud him and respect him and wish you much success. Cheers and all the best!

I agree with @MonsterCoatings and @Xusia, Jason has been very accessible, responsive, and shown great concern in providing a great experience. We know he is running things in a very hands on way and with time at a premium. Sure I’ve had some issues, but thus far, for me personally, I could not ask more of him.

I accept that almost any company is going to have occasional issues with a product. I try to judge a company not so much in whether there is an issue or not. Rather by how it handles an issue when one occurs. Thus far Enertion has been exceptionally good in this regard. Thank you, Jason, for bringing this product to reality and supporting your customers in the way you have so far.

Same thing for me, not that big a deal, but noticeable. Though I’m 6"1’ also…

Great, I’m 6’6" looks like I may need a remote extension. LOL

Related to the remote’s range. Jason told me he plans to produce a video soon outlining the remote functions completely, including pairing. He said there are multiple channels the remote can use. It’s said to operates in the 2.4ghz range, so it might be susceptible to some level of interference from things such as WiFi signals, Bluetooth, cordless phones, etc. That said, the 2.4ghz range is fairly robust and I’d expect at least a 20 foot range even with heavy congestion. I wouldn’t expect it should have much issue penetrating you body if it has power similar to a cordless phone. I’m not sure it does, though. Maybe there is an issue related to the receiver placement and the VESC or other component. In my dual the receiver is essentially right next to one of the VESC. I wonder what the configuration looks like for the singles, and if they have any better reception because of a possible difference. In @Xusia’s video around the 10:45 mark you see him run the board away from him and stop it at what looks like, to me, about 25 feet. You might want to wait till the video about the remote comes out and then try getting another channel in the band. I was told that the remote pairs when the board is turned on first, before the remote. Maybe (big maybe) a combination of turning the remote and board on and off separately could pair them on a new channel… If so, it might improve your apparent issue with range, assuming interference in the 2.4ghz range. You could also try using it somewhere where your certain they are no other 2.4ghz signals. Perhaps then your range would improve and you could rest easy knowing that the issue is easily resolvable by changing channels once you know how. Anyhow, hope that helps, either way good luck. Let us know if you find any solutions, like @MonsterCoatings remote extension.

So I took it out again, a couple things. When I road it on the sidewalk the tiny cracks would displace the belt and it would catch and shoot me off. So I went to the street and the rattling made something loose inside so I lost remote signal. I tried turning them all off and on and nothing worked. The board was at 50% the remote had a green light for charged still but wouldn’t connect.

I walked 3 miles uphill and then when I saw downhill I road it on the sidewalk which seemed to rattle something inside to make the remote work again.

I appreciate your response time and your help-fullness but my qualm with this board is that I can not just take It out and ride it without expecting something to go wrong. You showed us someone kick flipping it but i can’t even ride anywhere but the smoothest surfaces.

Probably the nunchuck receiver that came of the board? I don’t know the layout but check the VESC.
And take a picture.

I have the mono, still same reception.

are you saying the belt is literally getting caught on something? or it just feels like it is? I am not sure how it is possible. can you send a photo? Does the belt need to be tighter?

basic maintenance and stuff is always important, but at this early stage you should definitely feel like you can go for a ride without worrying about problems…and really there’s probably nothing that you should have to adjust… i have never heard of small cracks causing a belt to shift, im scratching my head on that one.

There is a chance your remote is not working properly, it might be faulty, there might be some interferences. Maybe some wires came loose, but they are all glued with hot glue. so it also seems unlikely it is due to a loose wire. I will make a video today showing how to change the radio channel. Also, try to test this without any other radio device nearby. It shouldn’t matter, i ride with my phone always without problems.

The LID itself is made with Carbon Fiber, this is known to block radio signals, After a trial of pure CF I ended up going with CF & Glass because I was worried it might block the signal.

After testing with both Pure CF lid & CF & Fiber Glass there didn’t appear to be any difference. We ended going with the CF & FG anyway.

One test you could try to see if it is the LID itself blocking the signal, just remove it and go for a ride to see if there are improvements. If it works better I will make Pure Glass Fiber lid and send that to you.

Also, this sounds stupid, but if you put your foot directly over the receiver combined that with the CF layer in the lid, maybe it is enough to cause these problems.

OK. Separately, would you mind sharing a picture of the layout of the electrical components inside the (Raptor single) board? I haven’t seen that yet in any other pictures or videos. I’m simply curious. With 1 less VESC, I wonder how the layout differs from the dual. 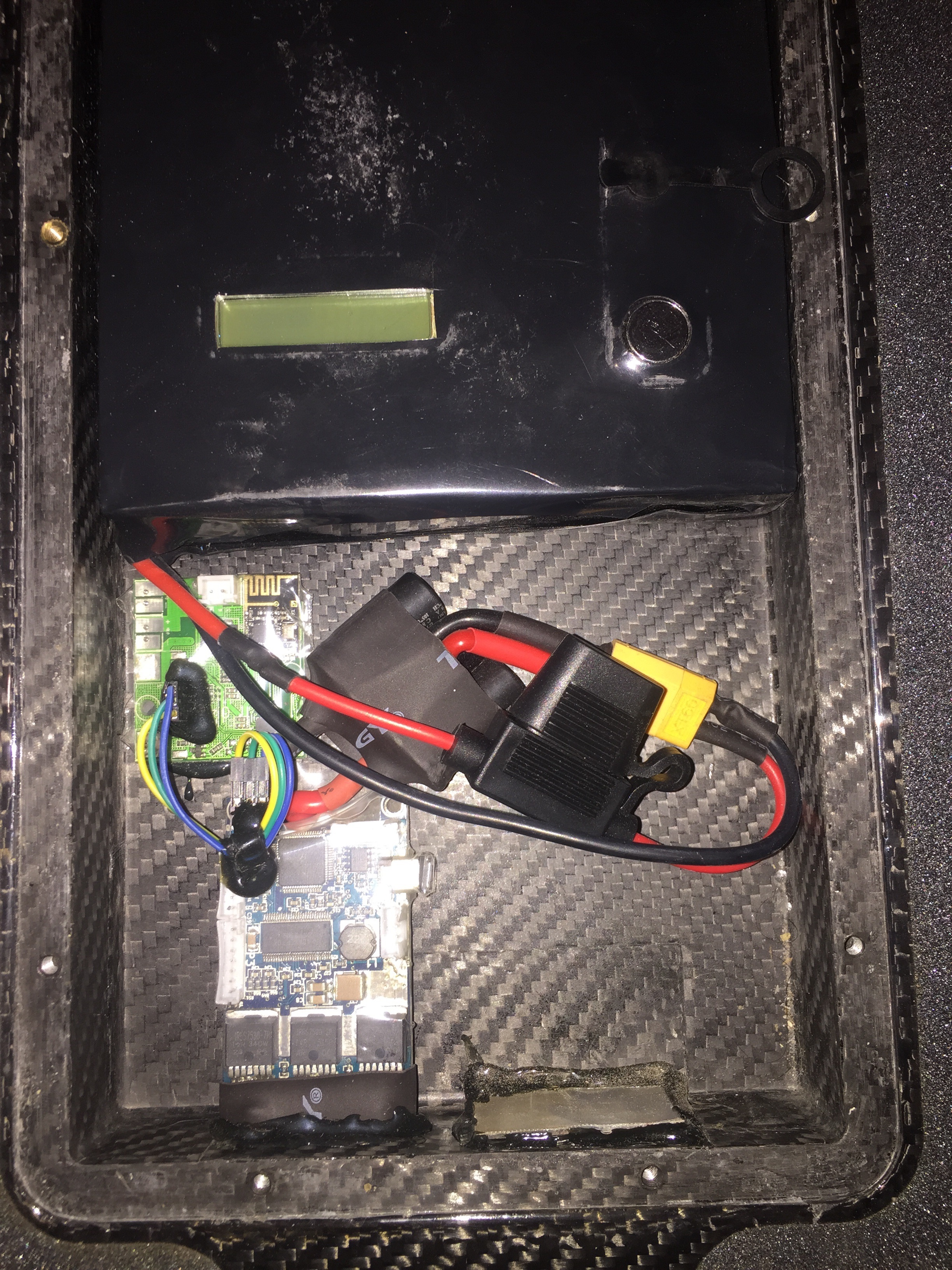 It’s not a big deal, I’m going to add an extension to the antenna and see what happens.

So I think I solved the belt problem. It was really a gear grinding problem but I tightened them as tight as they go I’ll let you know if they keep shifting though.

The remote problem is interesting though. I just took the lid off and the remote was WAY more responsive. I could be about 6-8 feet without a lid and i didnt have to point at it directly. But what I don’t understand is when the remote went out on my ride I was walking for 3 miles trying to figure out what was wrong I pointed the remote not even 6 inches away from the vesc and it didn’t work. But now it does.

test it without the lid. if it is not better try repositioning the receiver, you will need hot air to soften the hot glue we used to mount it.

If this problem is somthing that everyone with a raptor has ill get the recevier redesigned with a high gain antenna.

I am still trying to picture this, what are the gears grinding on? what did you tighten?

Now one of the motors failed after riding it for another mile. I’ll upload a video soon, when I get home from this walk. Honestly I want to just send you this back and have you replace it. I haven’t gone out without having a problem yet.

I doubt the motor has failed, but there is a good chance that when the motor fell off it has pulled one of the phase wires out of the VESC…

more than happy to have you send it back, get it rebuilt, ride it around to ensure its fine, then send it back again.

Ok I was just riding and I heard a rubbing noise. So I found that the belt was rubbing on the wheel because 2bolts on the motor mount bracket were loose, allowing the motor assembly to move closer to the wheel, thus rubbing. So… No big deal, I went ahead and aligned the motor assembly tightened up the 2 bolts nice and tight. After riding about an 30 minutes, all was good until the belt started rubbing on the wheel again. I went ahead an removed the 2 aforementioned screws, and found the problem. It looks like a bad batch of thread locker. This is an easy fix and just wanted to warn all raptor owners to double check their screws for thread locker before anything bad happens. 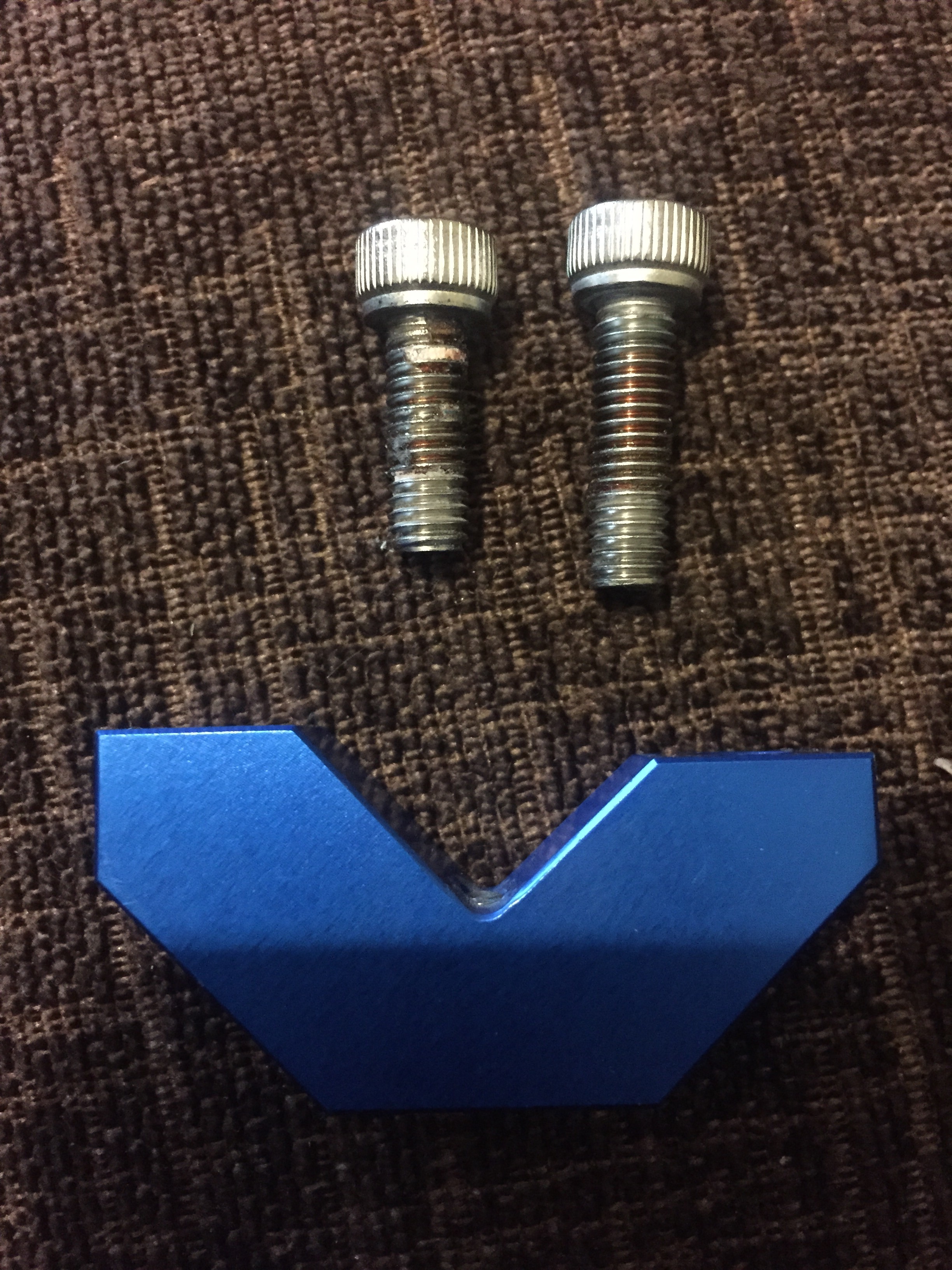 But what I don’t understand is when the remote went out on my ride I was walking for 3 miles trying to figure out what was wrong I pointed the remote not even 6 inches away from the vesc and it didn’t work. But now it does.

Thanks for the input, I’m not that stupid. I’ve ridden a good 10 miles on it. The light wasn’t appearing at all. Even though the right side said it was full charged.