From now on I’ll program a soft voltage cut-off at 33V and hard cutoff at 28v, this way if you approach a hill the board won’t shut off rapidly. It will slow down. 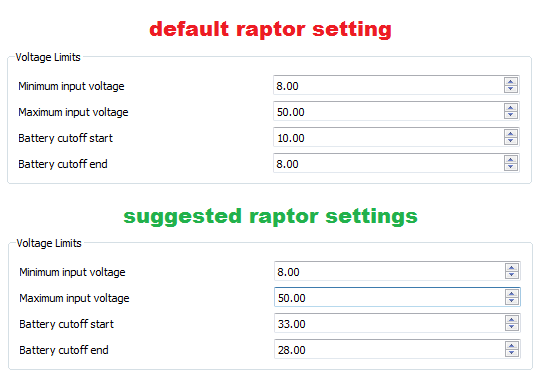 ALSO, you guys might want to get something like this to help with accessing the USB port on the VESC.

search something like this: "Mini USB Male to Female Right Angle 90 Degree Adapter" 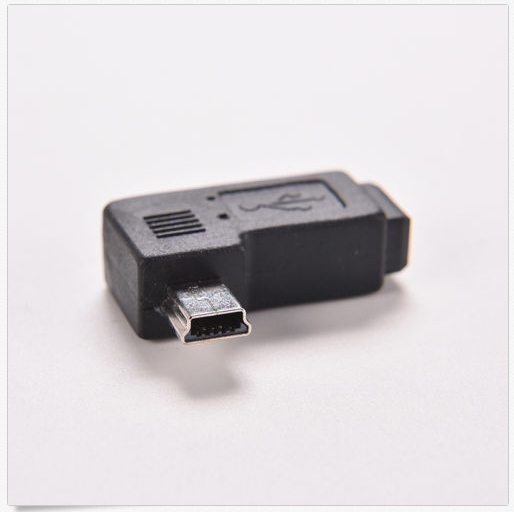 Do these new recommended numbers leave no room for a situation (even with a heavy rider and hills) in which the board would lose function? I mean it has a battery, right, it can’t go forever… So, what happens as the battery capacity is reduced and eventually is depleted to the low voltage cutoff? Do these new recommended numbers mean the board will reduce performance for a period to give the rider a “heads-up” that they are approaching a point of no power? If so, can that period of time be extended by adjusting these numbers? If not with these number fields, is that an option some other way? I would think the potential for sag would be greater for the Raptor Dual. So, are these recommended numbers good for both the Raptor Mono, and Raptor Dual? With the new numbers what would be the relationship between the boards performance and the LCD readout. Is it simply 10% = full performance, 0% = nothing?

If the battery cutoff end is at 28v and cutoff start is at 33v I take it to mean that the Raptor will slow down when the display is at 0 (33v) and kill the motors (and everything else) at 28v the LVC. Is that correct? Doesn’t that still mean that under load it could cut out going up hill, due to battery sag? Would it be better then to make the cutoff end 29v (or 28.Xv) to ensure that the board always had battery power, and therefore, reasonably, brakes if it has momentum? Would setting the cutoff start at, say, 34v give the result of more lead time till cutoff simply at the cost of time at max performance? If not, what would the results be?

I’ve tried reading a bit in different areas about the VESC programming and battery voltage sag. I couldn’t find the direct information I was looking for. I was confused about the different battery chemistry’s voltages and susceptibility to sag, along with the exact function of these parameters in the VESC. I’m certain there is some level of flexibility here, and would like to completely understand the effects of modifying these numbers.

Basically, I don’t have an understanding of the effects of this programming. I would like to. I want to make sure nothing like what @Xusia experienced ever happens to me. I’m a heavier guy, about 205+ lbs with a pack and gear… I suppose this means the board will experience more load than typical. I also live in a hilly area, at the top of a very long steep hill, so I’m guessing this will make the problem these numbers intend to correct an even more likely problem for me if I didn’t change to them, or something else, from the currently shipping default numbers.

I’m not trying to be a lazy ass, and be spoon feed all the answers. I would just as well like to see links to were I can study and figure all this out. That said, I wouldn’t mind having it all laid out here and perhaps other Raptor owners can benefit too. I’ll break this off, so it doesn’t distract from more pressing matters, as well.

Maybe we can share all our Raptor specific VESC findings here for the time being.

@thomwithah it’s good that you’re thinking about this; I use a VESC and before I set these parameters properly I would get knocked off during a voltage sag; either through rapid acceleration or low battery power. Since I corrected the parameters, it hasn’t happened.

There should be a thread about how to avoid “tripping” VESC and what to do to make sure it doesn’t happen. It can be ugly.

Batteries are not linear in their discharge curve, they quickly drop from 4.2 to reasonably steady voltage range of between 4 & 3.3 - after 3.3 they can drop off very quickly under high load.

At the end of the day, once a battery is depleted the board won’t work anymore as an electric board. It becomes a normal skateboard which won’t roll up hill and won’t stop when rolling downhill, try to keep this in the back of your mind.

From one perspective tweaking these settings becomes nearly redundant. It’s an ongoing debate I keep having with myself… Should I have de-tuned the raptors to make them less powerful? (more safe) In the end, I said no! leave them at max settings… maybe that was a mistake.

If there is enough demand from raptor owners ill spend the next week trialing a whole bunch of new settings that make the raptor more, um… how do I say this without sounding like a complete dick and offending everyone… “Fool Proof”

I could do a number of things.

In fact I could try to emulate a “boosted boards” style profile… I test rode one for 3 hours yesterday… it’s much more beginner friendly, but boring after about 5 minutes.

Shouldn’t the “batt cutoff end” on the VESC be a little higher than the BMS cutoff to avoid the power being suddenly cutoff?

I don´t think that those drastic changes are necessary. I love the pure unfiltered power of the Raptor!
You become used to it after 20 min of riding. Okay the first minutes are scary but it comes predicable quick.
The solution from Bossted it superb because you can use an app to make the change.
Personally I think it is some kind of over engineered because you use the App just once while owning a Boosted Board. Sure a really nice gadget but imo not necessary.
For the Raptor you should use some electrical tape to limit the travel of the joystick

I know it sounds ridicules but it would be a hardware beginner mode. Easy and without this VESC magic to get the full power.
Edit: The soft cutout makes sense of course!

That is awesome customer service. Thank you very much!

yes i know, what i mean it would be preferable to have the VESC gradually cuting off the power than the BMS kicking in and suddenly cutting everything off

Haven’t experienced the Raptor yet (order #1935), so take my comments with a grain of salt, but I would rather find my own limits over time than have a board set limits for me (caveat, changing LV cutoff seems to make sense). I bought the raptor because it was more powerful and had more range. My only ask is that you ensure the Raptor and remote deliver a consistent experience, so I know what to expect and have the thrill of finding my limits.

I think you meant to say have the battery cutoff start set higher. Yes this make sense.

I simply never bothered to do it because I never road up hill when its near empty… Like I said STUPID MISTAKE.

If the battery cuts out because of the BMS LVC when you are riding on flats or slight downhill there really is no problem, you no longer have power, you just start coasting…

@onloop Thank you for sharing the technical infomation. I hope to see more of that in this thread!!

This is truly amazing service!!! It solidifies the positive feeling I have about your commitment to customer service, and my choice to give you my business.

I hope users that taking advantage of this service share their results, settings, and general experience here.

Yes, thank you. Anyway, as a future Raptor owner I appreciate the efforts to make these boards great. I’ll stop high jacking the thread now.

i have not had any issues with it… i also ride with the lid on.

This graph is interesting because it highlights one major difference between 18650’s and Lipo… when the voltage sag begins! Below is a graph that @trbt555 posted in this thread. Here it looks like the drop starts at 3.6v for Lipos. 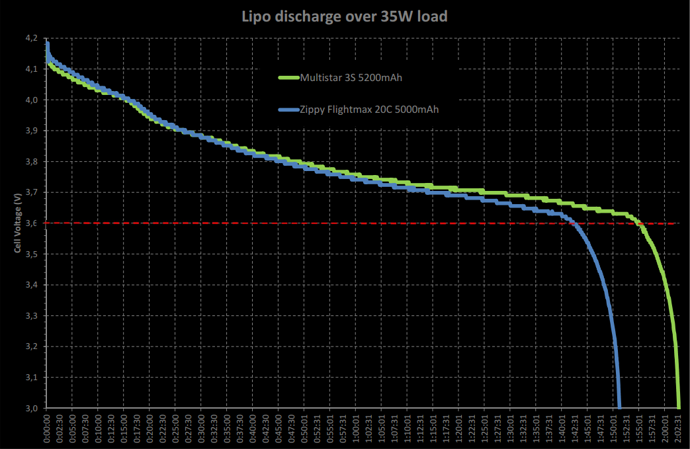 Well, I’m having issues making this appear as a quote from onloop, (I’m on my phone at the moment) perhaps a mod can fix it…

My instructions to reduce the aggressive low-speed power of the raptor. NOTE: please test with lid off first! This is to make sure your problem is not related to poor signal, if nothing changes with the lid off & the signal seems responsive its fair to assume you can get some results with the below instructions. 1. Reduce motor current. See “Motor Max” change this to 40 To reduce the brake force, change “Motor min (regen)” - this is also rider weight dependent. Maybe try -10 or -20 to get it …

My instructions to reduce the aggressive low-speed power of the raptor.

NOTE: please test with lid off first! This is to make sure your problem is not related to poor signal, if nothing changes with the lid off & the signal seems responsive its fair to assume you can get some results with the below instructions.

Watch this video too:

3. Limit Top Speed using RPM limits
You might also try setting the ERPM Limit Start at 20000 This will start limiting the Speed at around 10km… Could be a good idea until you get your bearings.
Otherwise maybe try these settings below…
Its really up to you. You can tune this to meet your expectations.

That video is great. I literally just got done changing my settings and was going to post my findings when I saw it. Although I was able to figure it out, that video explains it very well. I simply cannot express how much better the remote is for me after making those changes. I recommend everyone isn't 100% satisfied with the remote WATCH THAT VIDEO AND MAKE THOSE CHANGES. What a difference it made for me. Seriously! I only changed the deadband & min/max pulsewidth and now I can cruise …

I wanted to keep this separate from my previous post. For those that were potentially interested in the other control modes, Here is what I found: Duty Cycle Better than the "Current no reverse with brake" default settings, but after making the changes to the default settings I liked "Current no reverse with brake" better. PID Speed Control VERY good if you really just want to go slow. Allows for very precise speed control at slower speeds, but top speed was down significantly. Here again…

Here’s a video I made to hopefully help others: https://youtu.be/g96Vegbz-SM The first part is about the cable. If you are like me, you probably have a ton of those cables lying around. Rather than buy the right-angle adapter, I just dissected one of those. It’s really easy and only takes a couple minutes. The second part shows where to make the changes and the results of the new settings. It’s only on the bench, but you still see remarkable results. I also tested it in my garage, and …