So the other night I was dealing with a tough problem on a “commuter” build I’m working on. I couldn’t figure out how to mate the Enerion enclosure I got with a battery to a cool Skateshred deck with rocker and funny concave. There just wasn’t an easy way to get the two flush enough for even the rubber seal/gasket they sent with it. As you can see the deck has a unique rocker in it cresting near the front of the deck. 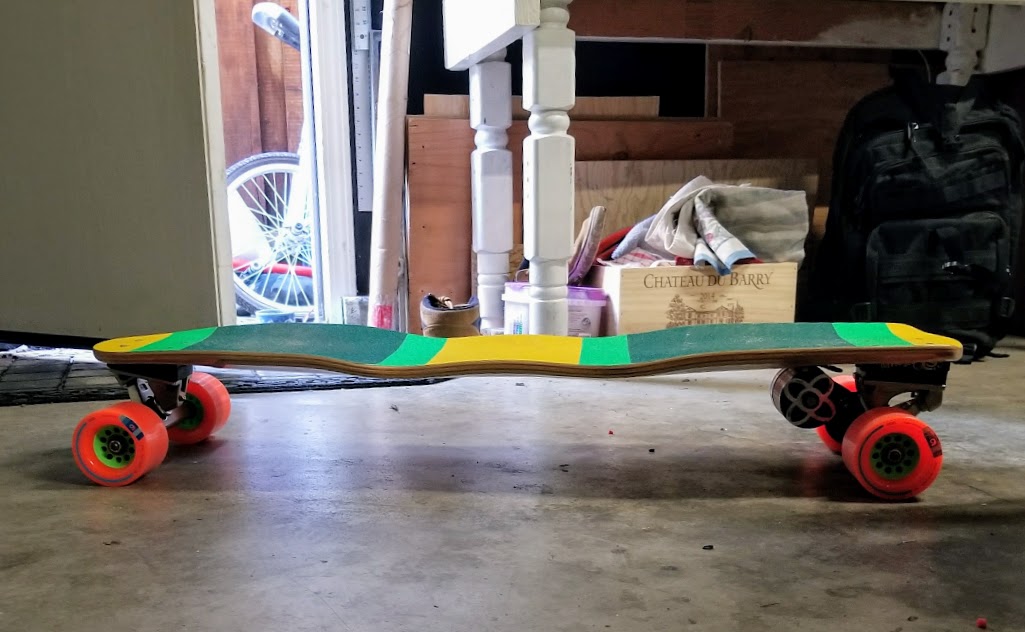 I stood there like a dumbass and decided to just give up and drink some beer. A local IPA from Track7 if you may know, it hit the spot!

Someone else in the forums posted a link to the perfect self adhesive foam gasket stuff to use on my other “skater” setup and I had that laying around. So I used small strips of it to build up a wall high enough to pool some 20-min epoxy. the idea here is to just get the deck level and then pour in a lot of epoxy and let it pool up and flatten out forming a perfectly flat surface for the enclosure to mount too!

I sanded the deck of course so it bonds well, traced the enclosure on the deck, cut out some foam filler to lay inside the epoxy to take up some extra volume and then blamo, I made this. 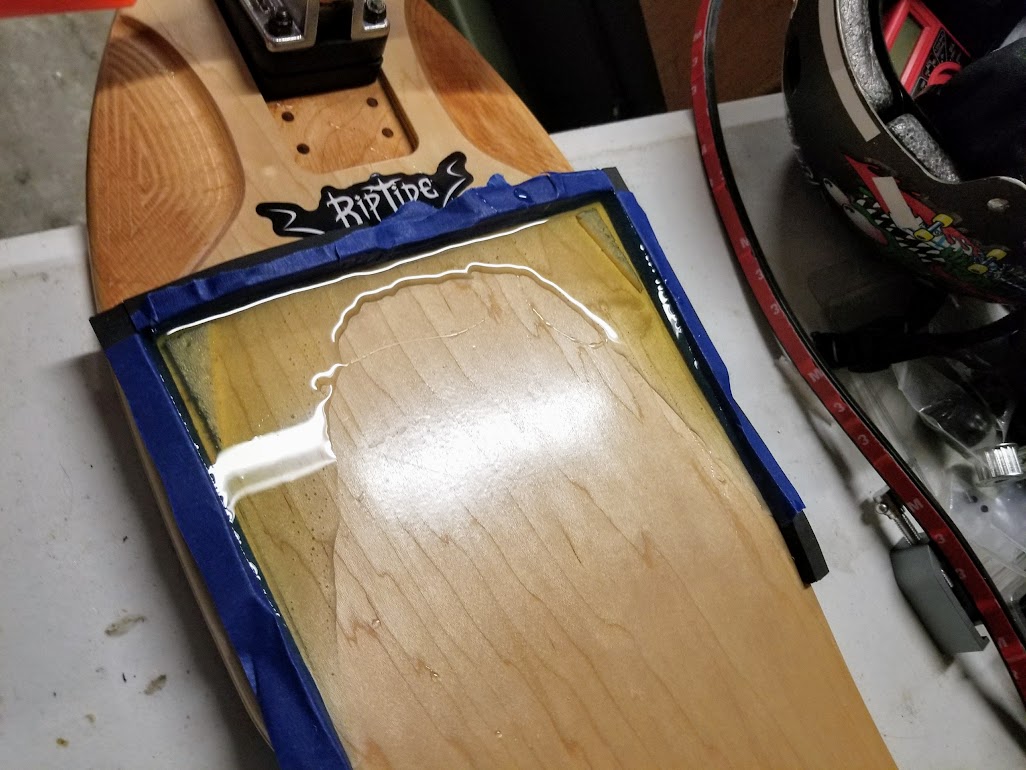 I literally took an entire 2x bottles of 20-min epoxy and mixed them together in a cup and then poured it in, it was so simple in the end. Of course the epoxy doesn’t dry perfectly flat due to surface tension and it’s sort of thick anyway. I let this cure about 3 days, even though 20-min epoxy says it cures in 20 minutes, that’s just to harden, for it to really set up it needs at least 48 hours or so, be patient if you do this.

After I let it set for days and had some more beer I took off the foam “dam” I had built and used power tools like a madman to grind and smooth it to shape so it looked cool. And then I simply painted it. It was about here that I realized that embedding LED’s into the epoxy would have been a great idea. So if you ever have a need to do this, and want a awesome and weatherproof place to install LED’s that can be seen on all four corners, do that before the epoxy cures, ok? 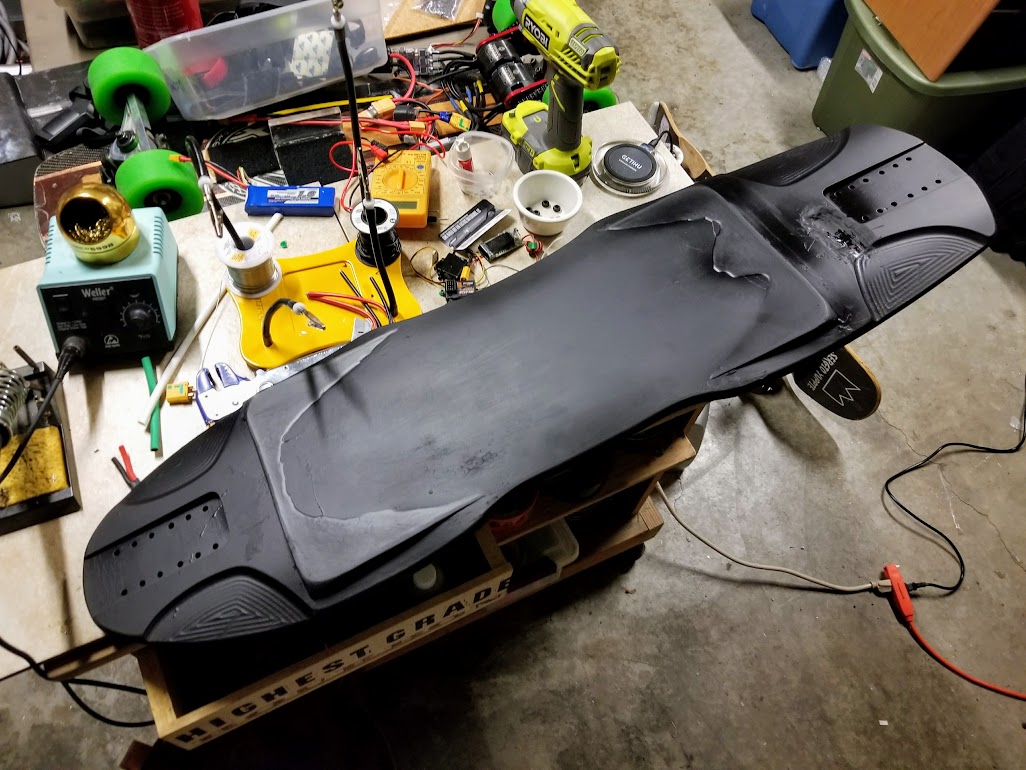 Here she is mocked up for a glamor shot in her natural environment, no beer spilled and the mating problem fixed…on to the next step! 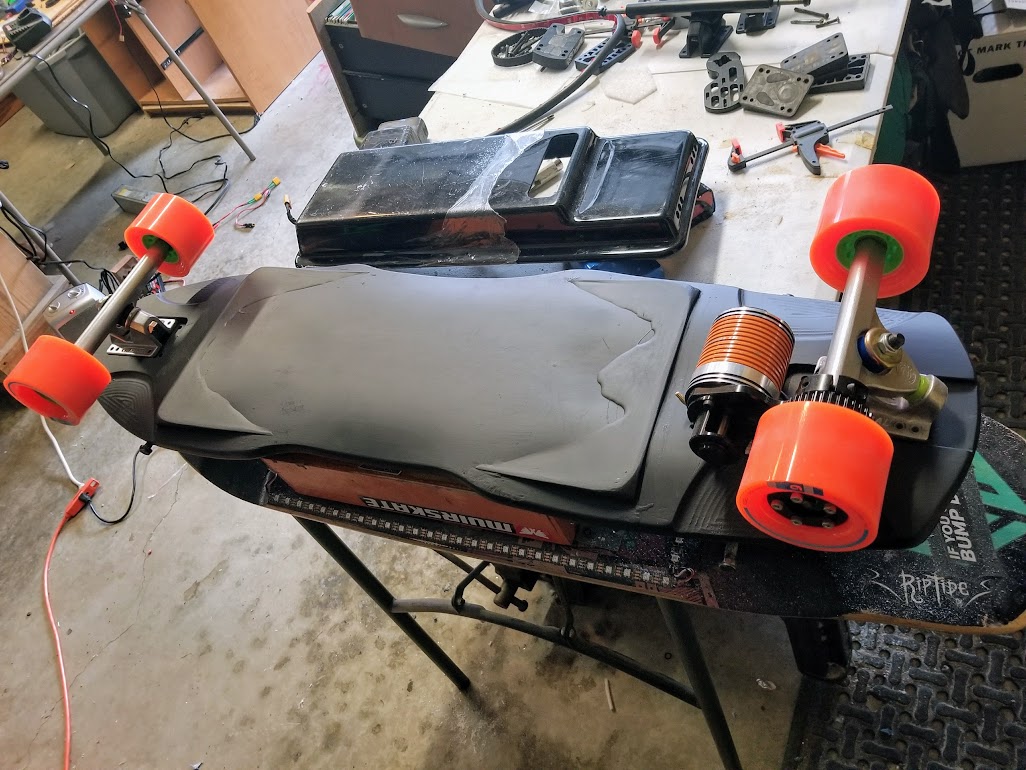 I don’t know what to call this method, I don’t know if it’s been done before. But I was pretty proud of my out-of-the-box approach of using a box to pool up epoxy, lol. I’ll just call it epoxy pools and we’ll open it up to testing, let’s see if this crap holds and doesn’t crack to pieces over time. I choose 20-min epoxy to hopefully get the best bond and avoid the brittleness of the 5-min stuff. I found flexible epoxy once, if you can grind and sand it, that might be even better.

@Jedi
I will for sure post some pictures of the finished product…just not there yet…I will share as I progress through the project.

Next is to drill and put in some nice inserts (sex bolts) and find the right length hardware to account for the added depth that the epoxy added to the whole equation.

How much weight did it seem to add… noticeable at all or not even? I am having the same exact issue with my neversummer that just arrived today, and I already made a custom kydex enclosure that just wont work as it… here is the link

Although there is a decent size of flat along the middle of the board, my enclosure extends further in width and becomes more narrow closer to the rear truck. Wish I didn’t already spend a couple days making a beautiful buck for and kydex enclosure which will be difficult to mount to this board.

Even attempting the epoxy pools may be difficult if you look closely at the bottom shape of my board you will see why.

Update on the epoxy pools yet?!

Works perfectly…no issues yet after miles of riding… 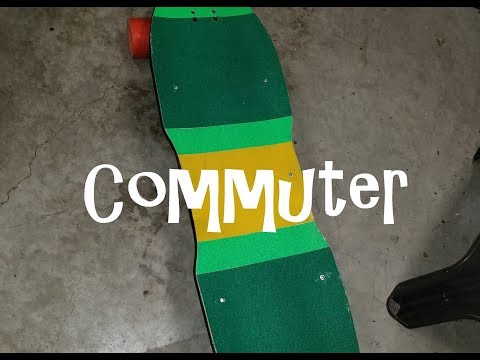 So to report on the state of this method after 1k miles or so, IT WORKS LIKE A CHARM!

I took it to Vegas, Tahoe, San Fransico and it’s been used in testing a few different sets of wheels including Kegals, 90mm flywheels in classic and now 97mm Reflys in Reflex thane.

I have lost one screw from the enclosure during that time and had to replace it, I have never opened the enclosure or had to service anything yet. the epoxy is holding perfectly, no issues at all, no cracking or signs of wear as I use this setup as my primary commuter and joy ride toy… 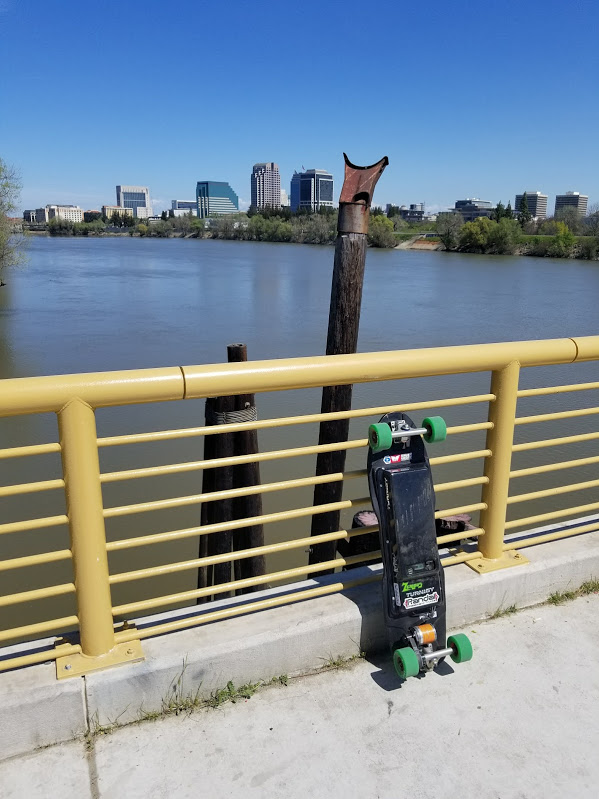 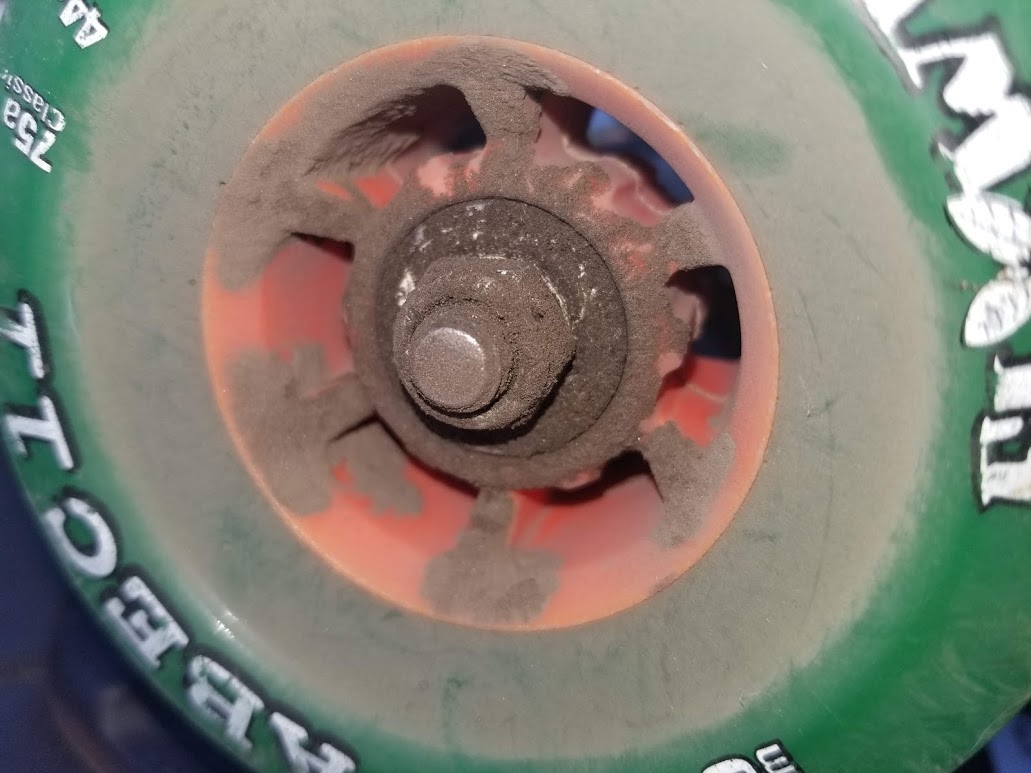 This is one the most diy stuff in forum, really cool idea. My board have a concave, i could put a slab in it or this epoxy, what epoxy did you uses in case the slab fail… 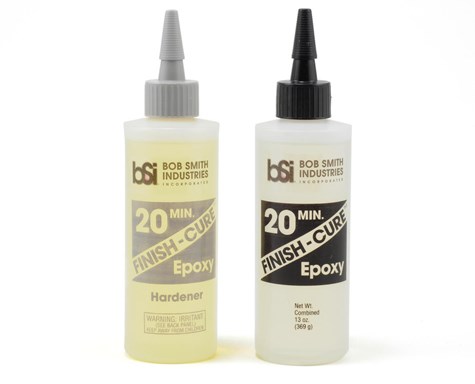 That is a sick deck.

I wonder if you could make an inner dam as well as an outer dam to save on resin/weight, assuming you’re only concerned with the perimeter.

That’s the TB 12s4p right? Really good for the price.

Its actually the older Panasonic cell model, and in this setup I get 30 miles out of it…I am happy with it, but I have two buddies having issues with torque right now, we got 2 bad 30q 12s4p packs, they would not turn on unless you flipped the switch a bunch of times, possibly a faulty BMS and then another…they sent them back and we have been waiting for weeks. TB isn’t very good on the communications and customer service, but the value in the products is there…also, every time I chat on their website, they tell me to send an email anyway it’s like a trap, a chat that doesn’t help much, so if you need to ask them anything, just go to email…

I agree but if you can get ahold of dexter here on the forums he usually helps alot.

I agree but if you can get ahold of dexter here on the forums he usually helps alot.

I didn’t know that, good to know. I don’t know if the dudes having the issues are in these forums…

Yea Dexter @torqueboards is the owner he can resolve problems quickly.

So far he’s helped me out alot I run alot of TB products.

@squishy654 PM me your email or ticket numbers for the 12S4P that have issues. We’ll get those resolved as soon as we can.

We just hired a few more people on our team so we’re working on improving our support times. Sorry, it’s been a bit slow lately.

Any way you can look at mine as well @torqueboards

So I sent a pm with three order numbers yesterday, nothing back, no eta, not even a communication back about it, but it was viewed.

there’s three local guys in Sacramento, pissed and waiting and about to throw in the towel due to lack of communication and integrity from the company. All they need to do is communicate and be honest, and that seems to be difficult for them and disheartening. I actually like some of the products, but if people cannot get them or they are faulty on delivery, then I have to lead by example and be honest about the facts.

@torqueboards don’t just pretend to be well intended, but display it through actions. If it’s gonna take 3 weeks, tell the customer it will be three weeks instead of toying with them, not answering emails and giving excuses for three weeks…it’s better to just be honest about the delays and shortcomings, you will get much more respect and patients for it…by now I’m sure those guys are sending hate mail and screaming…and they are justified if they still have literally no idea when they will see their stuff or their money back…this shit ain’t cheap, when someone throws down 500 bucks for a battery…you should at least talk to them…