I only have the evolve charger do I need to buy extra tools to charge manually and monitor or do I just bypass BMS and monitor voltage every once in a while with voltmeter?

Yes just charge B0 and B10 and monitor the whole time. Storage charge on li-ion is about 3.6V to 3.7V – 3.45V is basically dead. It’s not super-important though. Just don’t let it get lower.

Thanks for all the help and suggestions. I charged the battery, bypassing the bms, to 3.63. I hoped this might fix the issues but unfortunately when connecting the plug to the VESC or when connecting the balance cable plug, the BMS still gets way too hot. I dont think it’s a balance cable issue because the pic below shows in green that the balance resistors are fine but the red-marked area is burned. Anyone know why this might be? 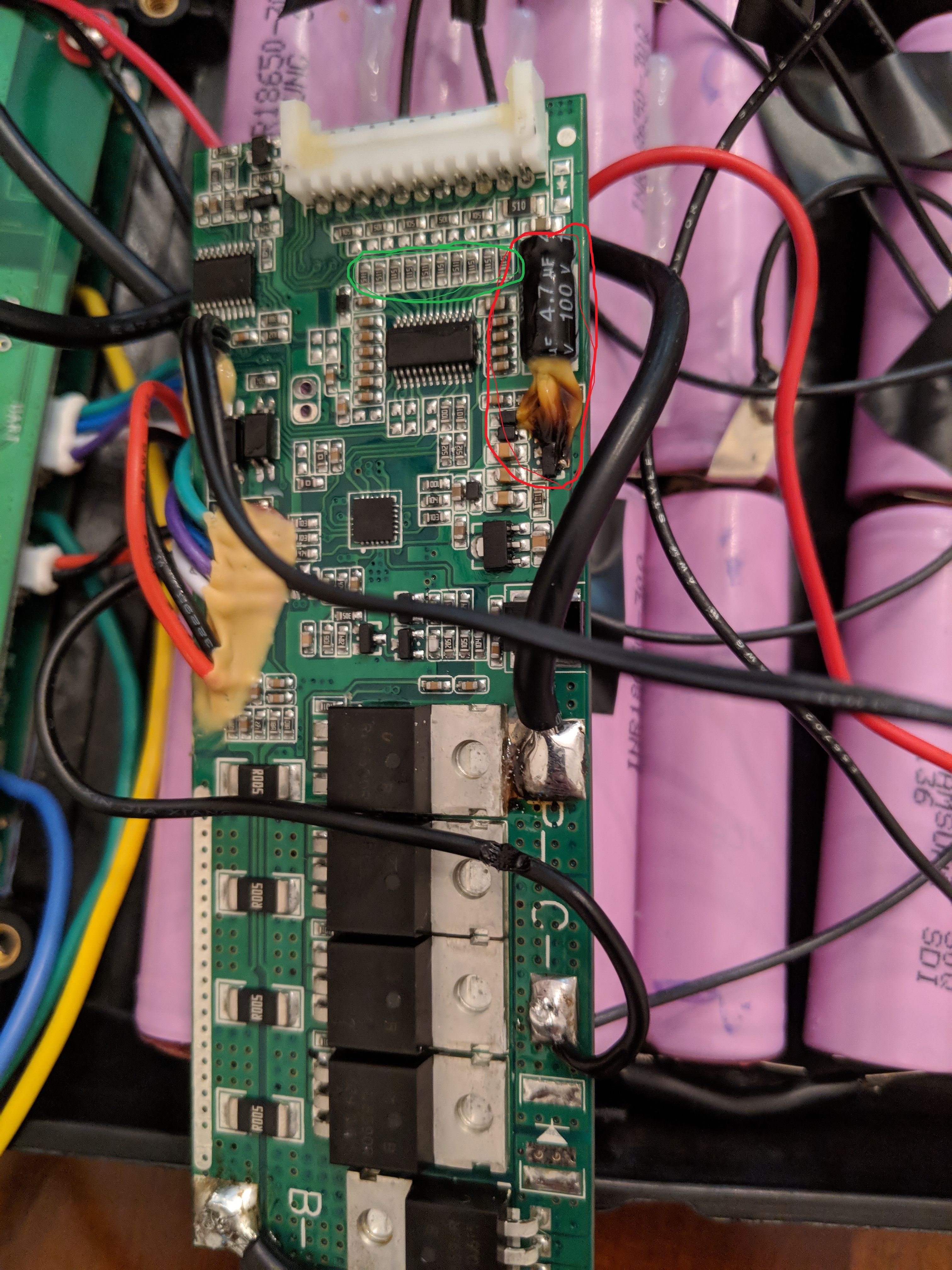 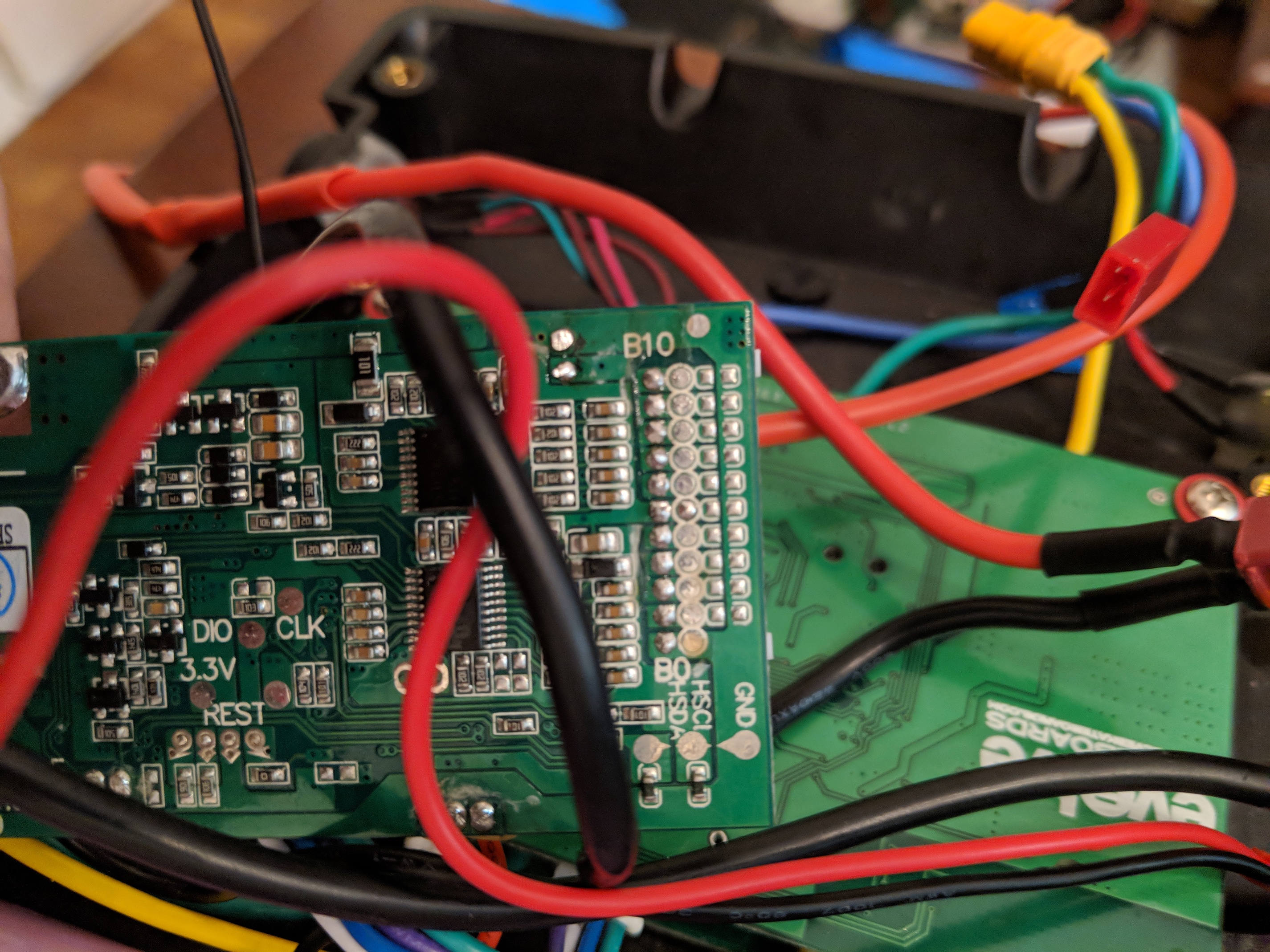 It’s a capacitor, but do you have a higher-resolution photo?

I’ll take one as soon as I get home from work. 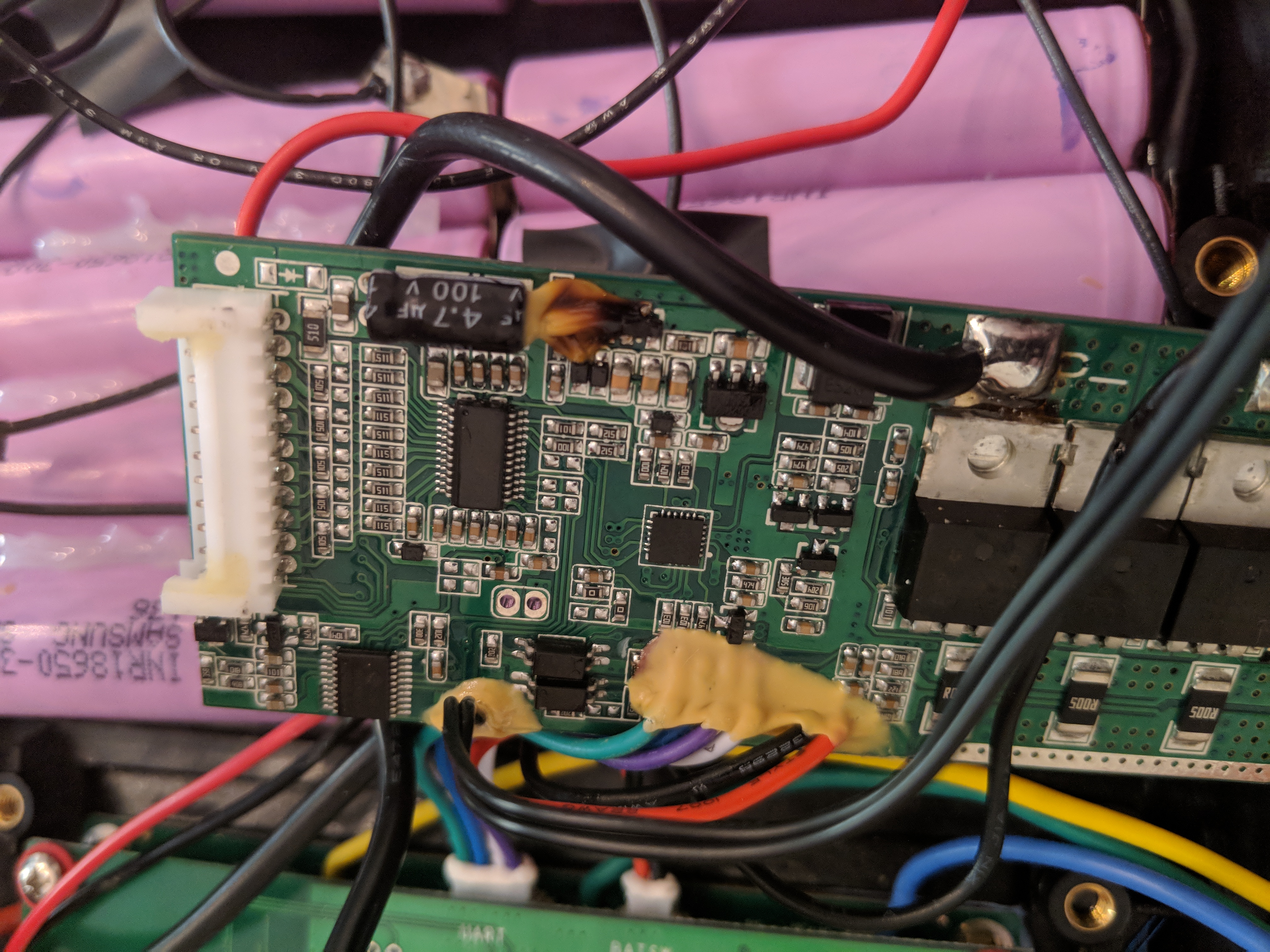 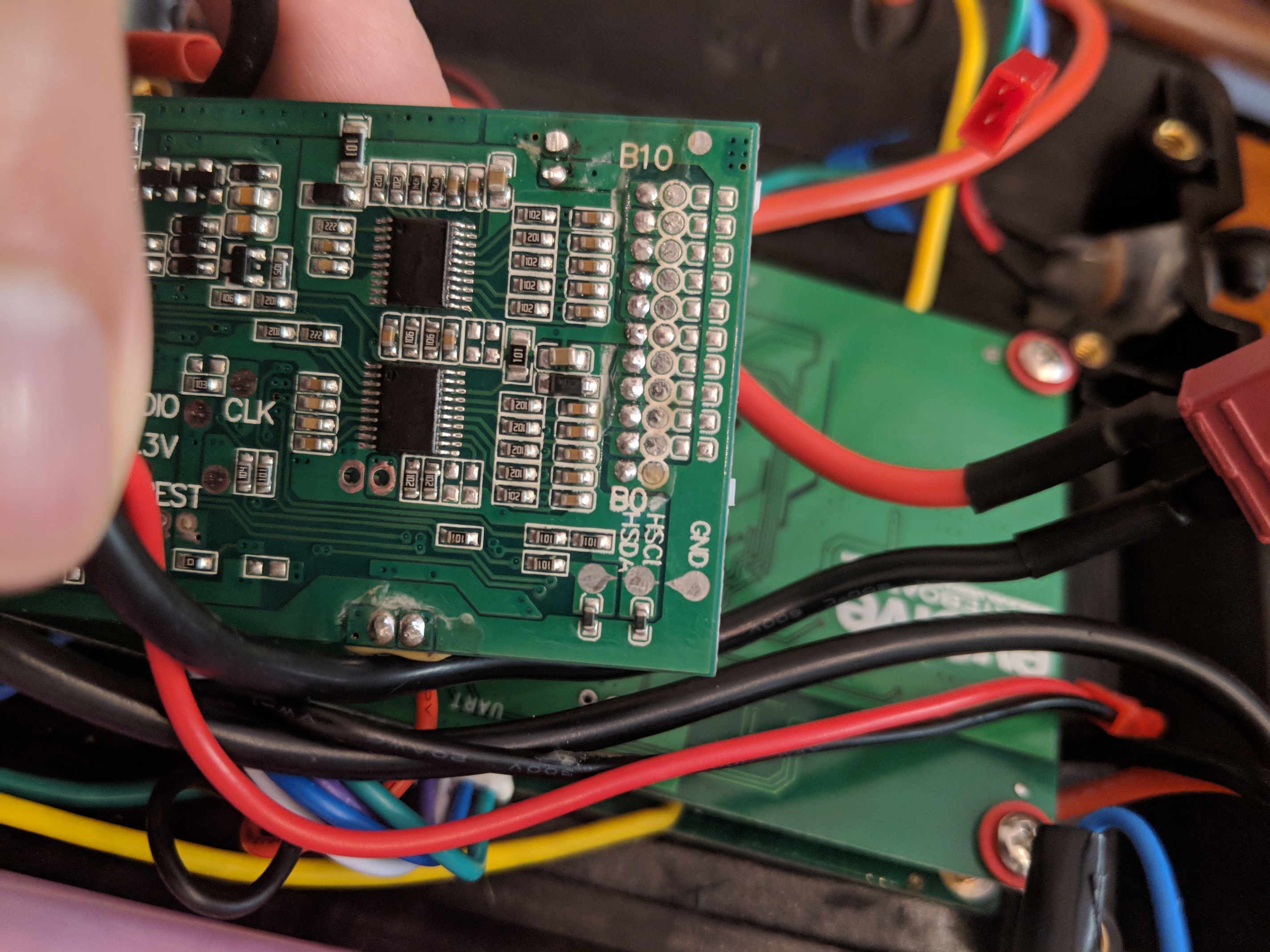 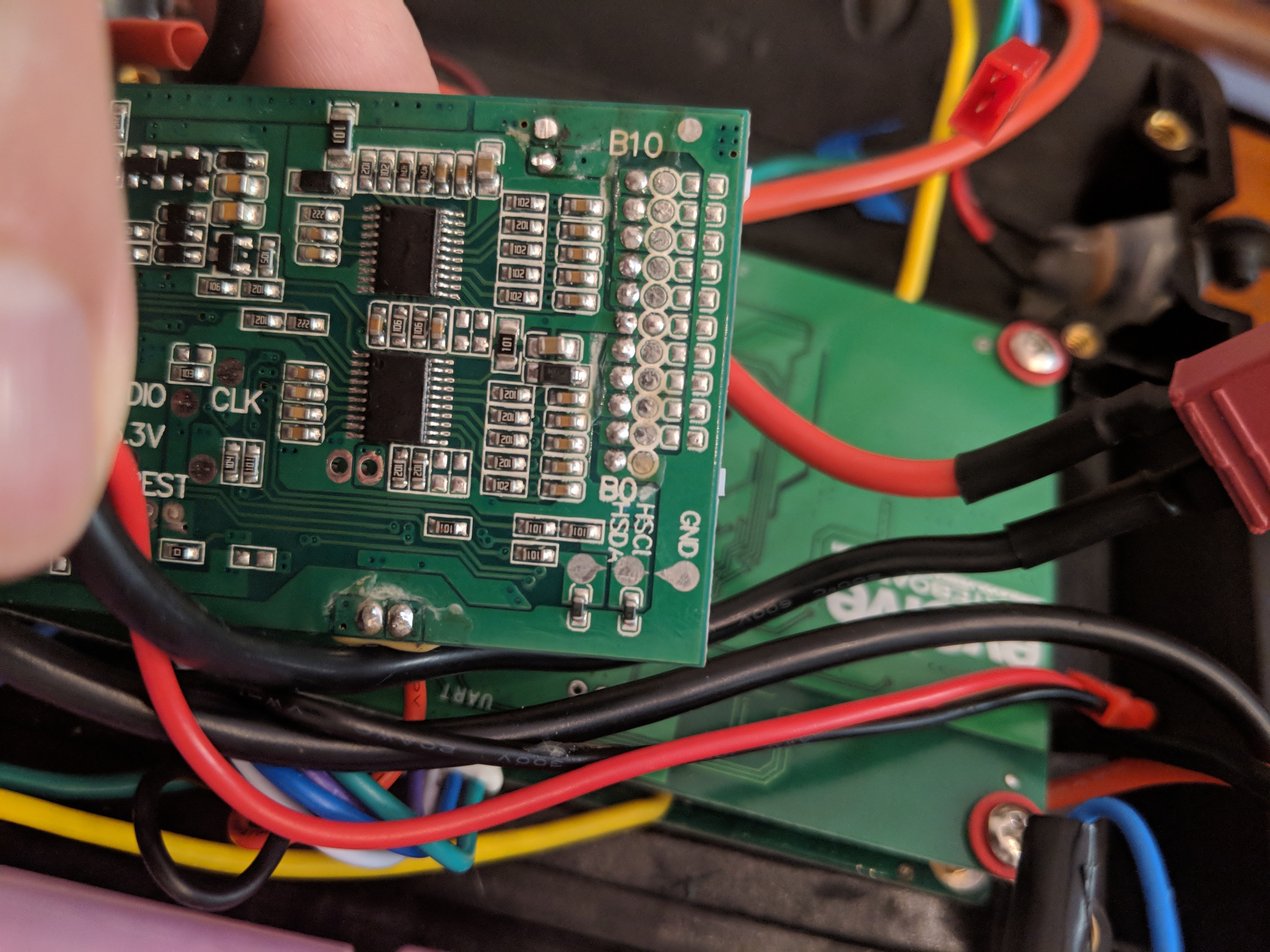 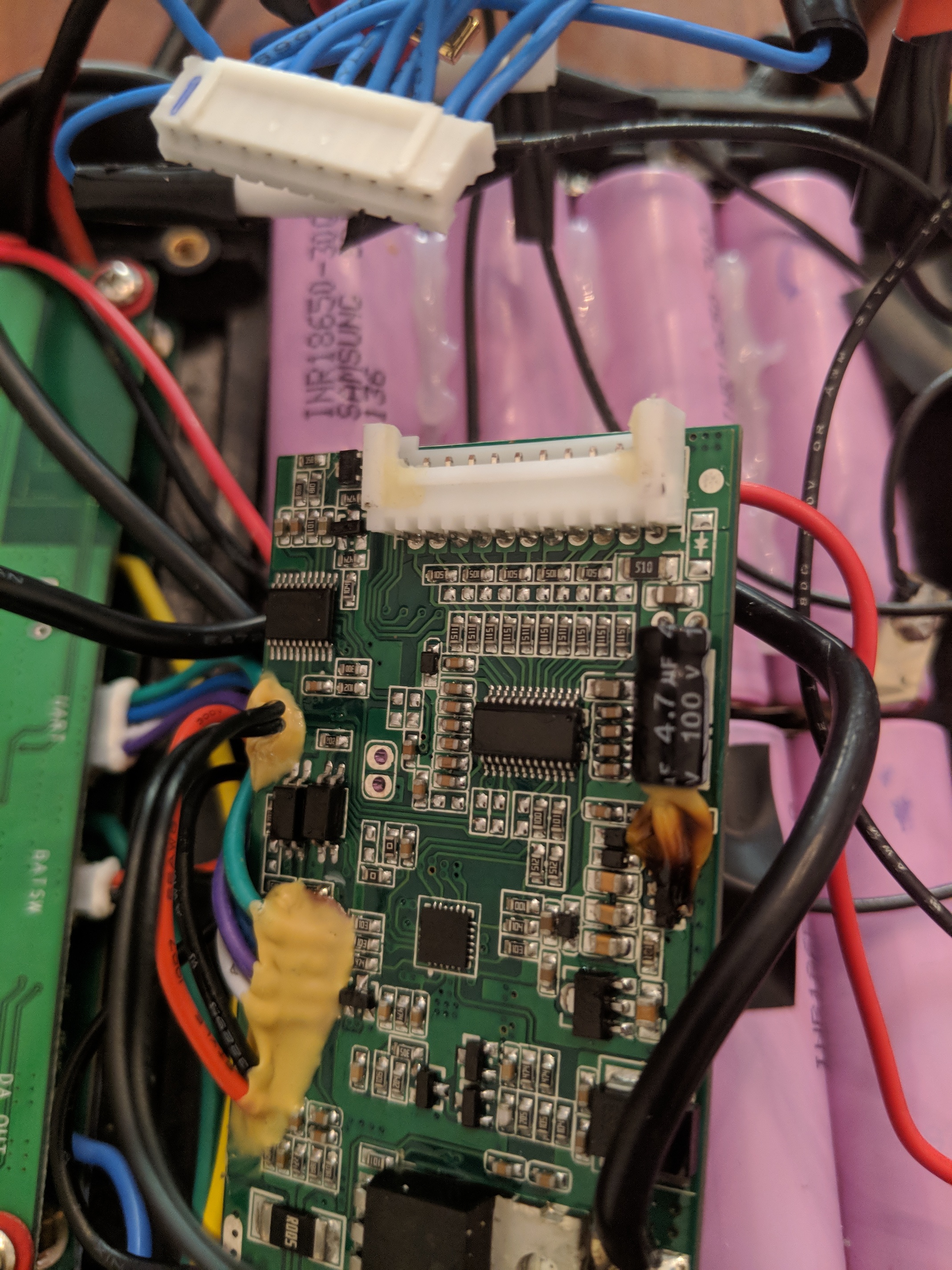 That capacitor’s insides have blown out. Remove it and replace it with another 100V electrolytic capacitor, 4.7μF

Did you ever get the bottom of this? I put a pack together using Lipo cells and the BMS MOSFETs get hot to touch. Charger is putting out 42v but it’s not getting to the pack. Cells were balanced first. Then I tried charging via the evolve charging system. Despite all cells @3.8v the charger went light green within half an hour. Got 4/5km out of it. Battery indicator dropped consistently over that distance and won’t recharge. Cell voltages are all over the place. Remote indicates battery is flat. Yes cell order on balance plug checked wiring ok. No shit stains on PCB Cells weren’t new. But were all serviceable. Salvaged Multistars from my own packs. I know they were performing well. Bought second hand. Previous owner complained about battery sag. I experienced the same symptoms. One cell in the original pack was a lot lower than the rest. So that’s why I went ahead and DIYed a replacement.

Unfortunately no, I didn’t. I gave up ordered a new BMS, vesc and remote.

Having the exact same issue, if anybody has any updates, post em!

not sure why BMS getting hot, but I am thinking that this is BMS has been programed for Lipo charge, which means that the charge voltage is not correct

Lipo battery should be charged with 4.2v vs 3.7V Li-ion

What is interesting here, there is a UART on the board which means that there is a way to change that by using software for BMS… somehow, or connecting to monitor cells balancing information

I will try to get more on this by checking software from my other BMS`s and will let you know! br

Welcome to the community! However,This is incorrect. They are basically the same voltage between the two. 3.7 nominal 4.2 charge. It was definitely the capacitor popping. You can see it in the first picture.

Anyway, cutoff also is important but all this is based on the data datasheet

\Now I am trying to find a possibility to reprogram such BMS, if anyone is aware of how to do that, please let me know. br

Lipo battery should be charged with 4.2v vs 3.7V Li-ion

This is ebike jive, and it’s not correct.

They’re mostly, but not quite completely, fibbing, and they are causing confusion and great safety hazards by using an abstract “lead acid equivalency” or “nominal voltage” or “mid-charge approximation” and not mentioning that, but instead presenting it as the operating voltage. The way it’s presented makes it simply untrue.

Beware of misinformation — using averages or nominal voltages and presenting it as operating voltage.

When designing custom electric vehicles, you are the one who has to know what’s true and what’s not, and decipher whether a presented voltage is a genuine kg·m2·s−3·A−1 or whether it’s some theoretical voltage.

Nominal just means named — as opposed to measured. So a nominal voltage is just a name, exactly like George is a name, and it’s related to, but has little to do with, actual measured voltages.

oho, Thanks a lot for your reply very useful!!! I just clean one of the misunderstanding

Do you know how to monitor this evolve BMS? or how to reprogram?