So I understand that the Evolve GT has insane torque but what’s with the top speed? I’m pretty new to eSk8 so please don’t hate me as I try to explain my reasoning.

The LHB board has slightly weaker motors but somehow goes almost 10 mph faster on the same size wheels. From what I know, it has to do with gearing and most importantly the 12S battery. So here’s my question:

What would happen if the Evolve was fitted with a 12s battery?

My Evolve Carbon GT doesn’t arrive till mid December and I’m stuck with the stock Evolve wheels and the roads I’d like to ride on would be much better at 30+ mph. Thanks to anyone who answers!

Side Note: I will get Abec 11 Flywheels (97mm 75a) later and then consider these modifications after the warranty.

The LHB board has slightly weaker motors

they are not weaker at all… they are bigger and better…

I was talking to Damon(LHB maker and all around awesome dude btw) and he said “the motors I use only spec out to 2800 watts”. Which is about 200 watts less than the 3000 watts the Evolve GT boards offer. He also uses a 12s4p batteries while Evolve uses 10s4p batteries - which is why I started this thread.

2800 watts is for each one motor, the elvolve is for the two motor combine… 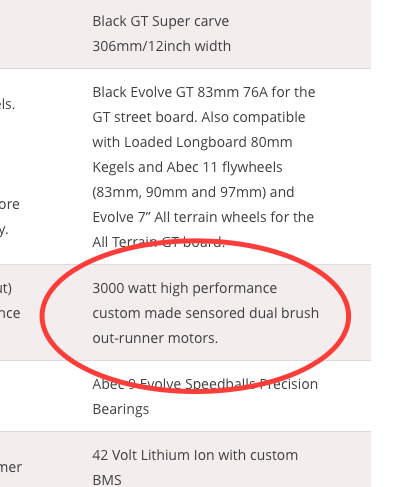 The rating of the motors doesn’t tell you what it’s putting out. If u had a wattmeter connected then you’d know. The ratings are just ratings based on who knows what. There’s no standardized testing method. Adding more voltage might blow it up but there’s often a bit of headroom. More likely it will be programmed for a voltage in the bms and probably other stuff and it won’t like it and maybe will shut down.

Are you sure those are the motors he’s using? I’m going off solely what Damon since I assume he knows what he’s using. Thanks for the help by the way!

These where the ones he was using before (enertion R-Spec, but they will be discontinue), so if he change he probably stay with something similar.

Wow that’s a fail haha. So does this mean the Carbon won’t be able to hit 30 MPH no matter what?

Wait gearing can affect battery life that much? From what I know, the battery readings on the remote aren’t entirely accurate as it measures it based on voltage so sometimes it shows it lower than it actually is. Don’t quote me though.

Also 37 mph is very solid, if I can hit that while maintaining around 15 miles of range I’ll be happy.

Wow. Rough, I guess I’ll stick with the board for a few years and maybe make a DIY with the deck later on. This is slightly off topic, but do you think I have to get the genuine Abec 11 Flywheels (97mm 75a) for $110 or would these work fine?

Find many great new & used options and get the best deals for Black Longboard Flywheels 97mm X 52mm 78a ABEC 7 Bearing Spacer at the best online prices at eBay! Free shipping for many products!

dont think they will fit the pulley. Ive heard of people grinding out the center but took lots of work. and the rebound on the clones sucks and you’ll feel more bumps and get worse range

Iv’e been riding around on the stock evolve street wheels for the past two days now(probably about 50 miles total iv’e been riding alot). They are not that bad at all. The roads around here are not the greatest either.

I have a cheap chinese board that has some knockoff flywheels on it and the stock EVOLVE GT wheels are MUCH MUCH better. The GT wheels are actually pretty soft. The knockoffs are hard as a rock.

That being said, I am going to order some 97mm abec 11 75a’s and give them a try soon. The stock wheels aren’t bad at all, but I think the extra diameter will make the difference.

EDIT: Oh and NO, the gearing will not effect your battery performance at all: IF you have it geared correctly for your specific needs. If you heavily gear your board for high top speeds, and then try to climb tons of steep hills starting from a stop then you will obviously put strain on the motor which in turn will draw more power from the battery…

Great to see an Evolve owner have some input. Thanks!

the gearing will not effect your battery performance at all

The gearing will affect voltage sag, since you will pull more amps, which in turn, is the batteries performance. If a battery sags too much, you will either over discharge your battery frequently and shorten your range. A big factor on SAG is amp draw, especially in amp draw in relation to the max continuous amps a cell can take. You will sag will grow exponentially as you approach and surpass the max continuous amps the cell can take. One of the simplest solutions to SAG is lipos. They are more dangerous, but they usually handle far more amps and as a result, sag much less. Since evolve went to li-ion, which is the safer direction, they will have to deal with sag, especially in the small configuration they use in the GT.

Basically, you can ignore those motor ratings for the most part. Your main concern in a motor should be stator size, magnet fill, and copper fill. Since nobody likes to hand these numbers out freely (beside hummie), it’s anyones guess as to whose motor is more powerful. I would say based on what I know about the 2 motors, I believe the r-spec is a far superior motor in terms of power.

I run 4 motors, and I have yet to pull more than 1000 watts on the entire system… I ride up hills well over 20% at speeds about 18 mph, and I still can’t pull more than 1000 watts. And theres no standard for getting these numbers, just like there’s no standard for battery range. Everybody says they get 20, 25, 30, or even 35 miles in range. But what they don’t tell you is that’s going down hill and flats with wind pushing your back, and you must weight 120 pounds. You also like to ride at 12 mph with weak acceleration.

From the testing I have done so far, the biggest factors I’ve found weight and environment, but especially weight.

If your new to electric skateboards, I would recommend building your own, and over specing everything. Vendors often exaggerate numbers to compete.

Currently, there’s no board on the market that met my need for both speed and torque, so I built my own. Now I have more power than the GT, Raptor, or any other board on the market for under 2k. And soon, I’ll have hopefully at least twice the power and an even higher top speed.