So here I am. Skateboarderd for ten year. I sucked at tricks, I mainly used it for getting around. Stopped riding for reasons I can’t remember. Now I’m moving to another city where roads are all asphalt, where the weather is better and where my daily commute would take ages because of traffic. Daily commute is about 9 km with some moderate inclines (a few 20 somewhat meter clims). Nothing special. An eboard seems like a great way to get around while still having a bit of fun

I’ve been reading up for weeks and decided that I like the Enertion Raptor the most, however I don’t like the way it looks. I’m really quite picky, it’s a problem, haha. So I’ve been told that you don’t go too crazy with customization it’s all fairly reasonable to do. I work on cars and bikes and build skateboards and computers before, so I guess I should be good.

Before I start splashing down money I thought I’d first post my build list here for you guys to shoot on. I like my build to look clean and somewhat classic. So no fancy graphics and colours. Say what you will about the Boosted Board, but in the looks department they’re up there.

Board Seeing as I’ve skated in the past and like to have some fun outside of just commuting I’ve decided I want a kicktail board. I also like the look of a twintip and that should help avoid wheel bite. I don’t need it to be completely symmetrical as it’ll be electric. So I’ve been looking around a lot and finally came the Hekmati&Olson. They have the D97 which is a freestyle board and the FD100 which is a little wider and longer, and more freeride oriented with a bigger concave. I think for my build the FD100 is the best choice, but I like the look of both. Specs: 100 cm long, 25 cm wide, 72 cm wheelbase and 14mm concave. 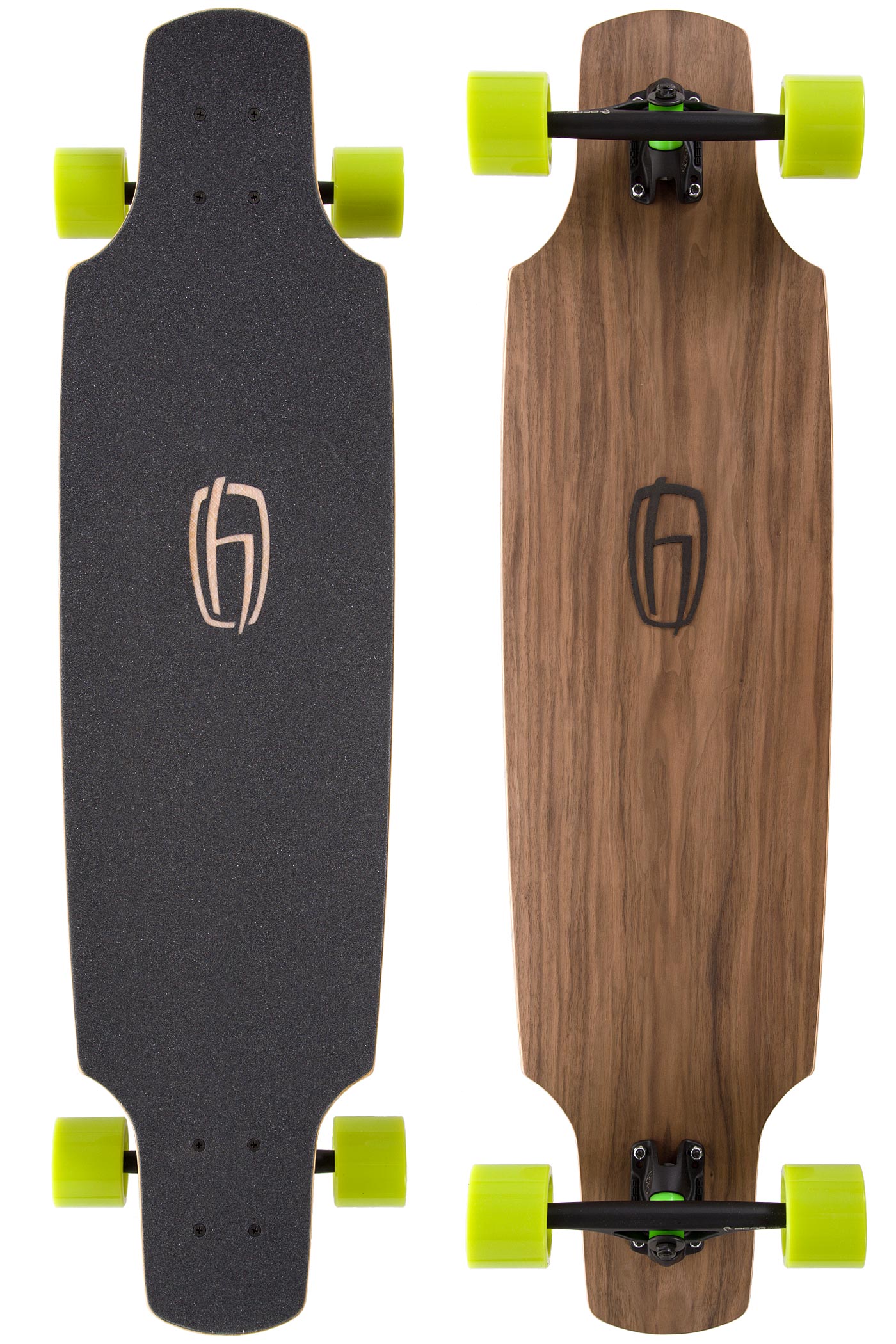 Trucks I like Jason and I would’ve liked to be able to throw some more business his way, but I just don’t really like the blue colour on his equipment. I want them black, so I think just getting the Caliper 2 50° trucks at 10 inch wide is the easiest way to go. Am I right in thinking these are simply the same as the Enertion 50D trucks? 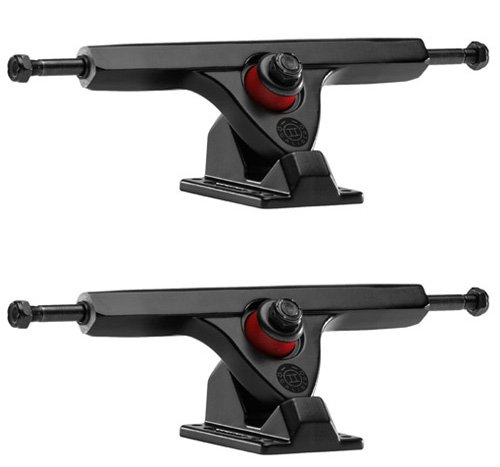 Electronics I don’t want to screw around too much with this as Enertion seems to have a great line-up of electric components. I like their case and they have everything. I might do the LHB trick of getting the blue of the mounts though. So I’ll get Enertions SPACE cell battery + housing, motors and mounts. I want the dual motor kit. I might not need it, but I want it.

VESCs I’m thinking just getting the Enertion ones are fine, but from what I’ve read not everybody is convinced they’re great. Should I get the Ollin board’s one or are Enertion’s fine? And should I get the premium ones or just the regular ones?

Wheels and pulleys So yeah I like Enertion, but I just don’t like his blue. I’d much rather have something black. I’ve seen the Abec Flywheel clones and the Evolve GT wheels look okay too. However these probably won’t just bolt on like the Enertion stuff would, or am I wrong about that? Like could I get the Enertion setup and use the Evolve pulley with Evolve wheels for example? Or maybe the Enertion pulley just fits these wheels? I have tools to work on the trucks a little (I got a dremel

) but I’m not really looking forward to big hackjobs.

Remote Haven’t decided on a remote yet. So your suggestions are welcome!

And please just shoot on my proposed set-up, maybe there are some clear flaws

Glad to see a second O&H build here getting started. Are you from Germany?

They’re very good looking boards and look to be of good quality. I had indeed seen your build, very impressive with all the machinework. I checked your build to see how the flex on the O&H decks was it was as I’m still going back and forth on the FD100 and D97. The D97 just looks incredible, but the FD100 seems to be better for what I want to do with it.

I’ll be moving to Australia in a month, and the decks are harder to get there. So thought I’d just buy the deck here and ride it as a regular board in the beginning and switch to electric when I’m there.

Seems like the D97 doesn´t have a concave. Therefore i would recommend the FD100. My fd98 has a concave and i don´t wanna miss it because it kind of locks your feet into the deck which makes riding feel much safer especially while carving at high speeds.

If you are planning on doing a dual I have just posted a whole lot of stuff in the sale section. Ollins (Chaka) VESCs, gears, wheels etc. If interested just give me a shout.

I’m pretty sure that with enertion and evolve pulleys you’ll need to remove a bit of your hangar to make room for the extra bearing located in their pulley. If you don’t want to do that but have some good equipment, the best thing to do is to order timing belts and pulleys from someone not trying to make a living selling skateboards. As much as we want to support the community, $60 for a pulley and some screws is a rip off compared to what a hardware distributor charges.

Also 100% you should get the Ollin vesc. worth every single penny.

The difference with enertion trucks is that they come pre chopped, which is required if you want to use their wheel pulleys. You can cut it yourself on standard calibers as well, it’s not that hard. The GT wheels and clones fit abec pulleys just fine. I use the GT wheels myself with enertion pulleys.

Thanks for your reply. Just to check, you use the blue pulley from Enertion on the GT wheels and those fit the Abec wheels too? That would make live a lot easier

Edit. Nevermind. I hadn’t done my research. They fit.

I pulled the trigger and got all the non-electric hardware. Chose the flywheel blanks to go with them. I wouldn’t have minded getting the original Abec 11s, but I’ll never be able to come to terms with that green and orange. I’m just not hip enough to go with those types of colours

I’ve decided to use the board without electrics for a while, at least until I’m in Australia. They’re illegal here (just ask Casey Neistat) so no use getting everything now. The battery would also be a pain to ship back to Australia. Besides, with Enertion being in Australia it just seems silly to not wait a few weeks.

Don’t have the electric stuff yet, but the board is in and I’m liking it. I have it for about a week now and it took quite a bit getting used to. Compared to a skateboard it’s quite a bit less nimble and significantly higher, but it rides comfortably. I don’t want to ruin the Flywheels on regular riding and having to order them again when I’m going to add the Enertion stuff, so I put on some Earthwing Superball Floaters at 77mm.

I have about 20 kilometers on it and been practicing pumping a bit but it’s already clear I’m going to want to add motors. Going a couple of kilometers pushing is fine, but as soon as there’s a hill or strong wind I’m regretting not just getting my bicycle

Anyways, I’m going to have to wait ordering from Enertion for a bit. Not getting to Australia until the end of October, so here’s some pictures of what I have now now. 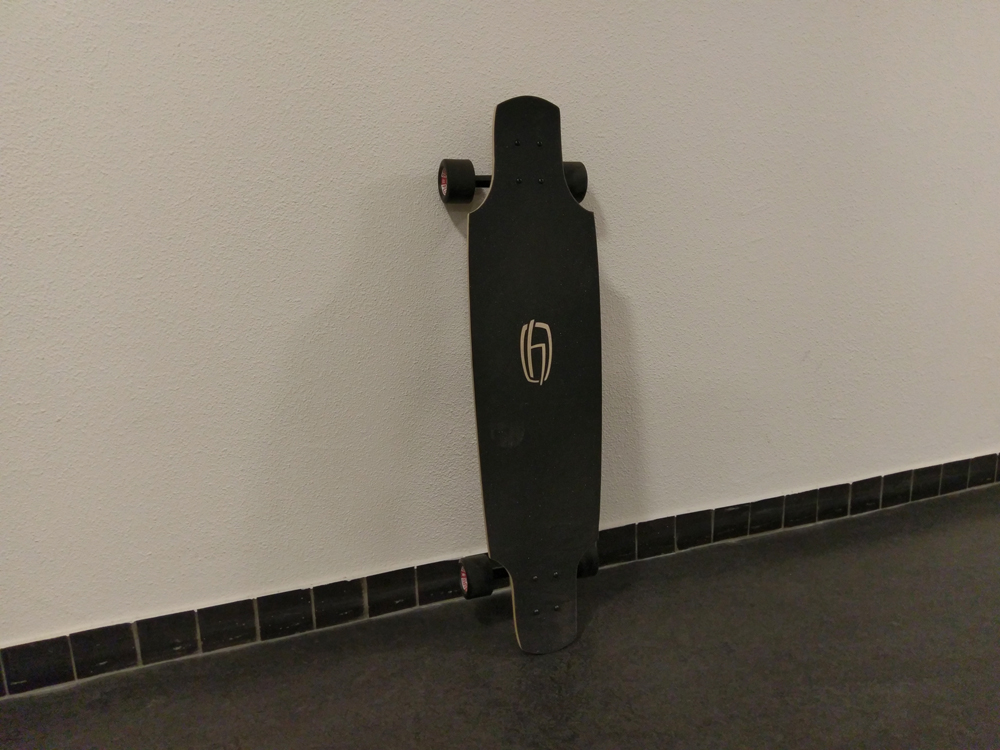 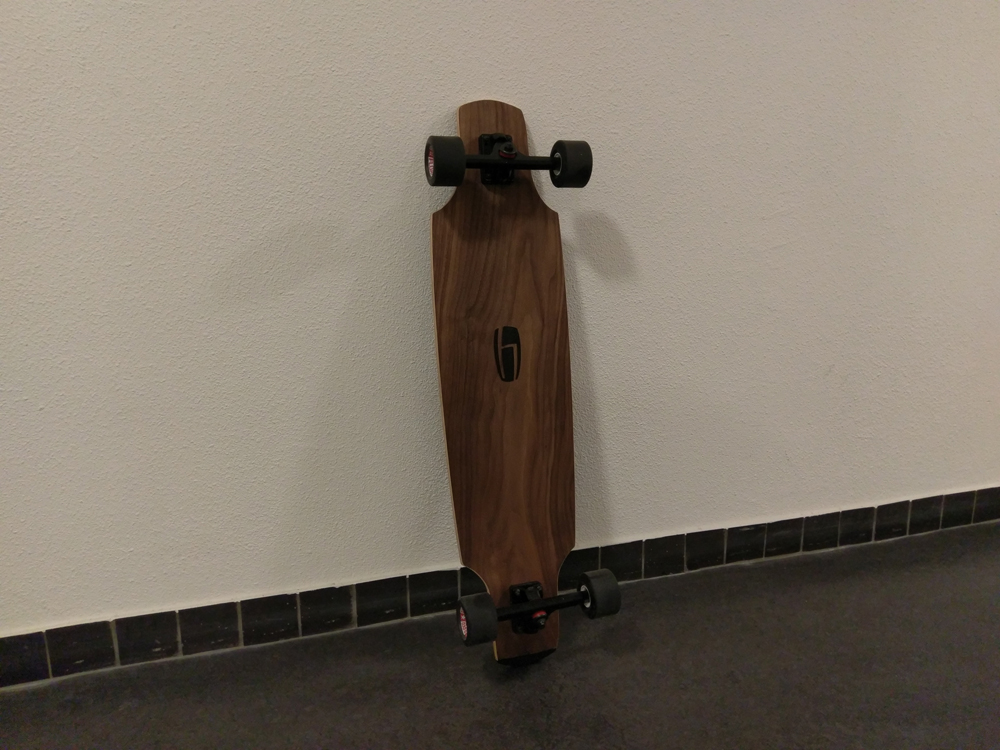 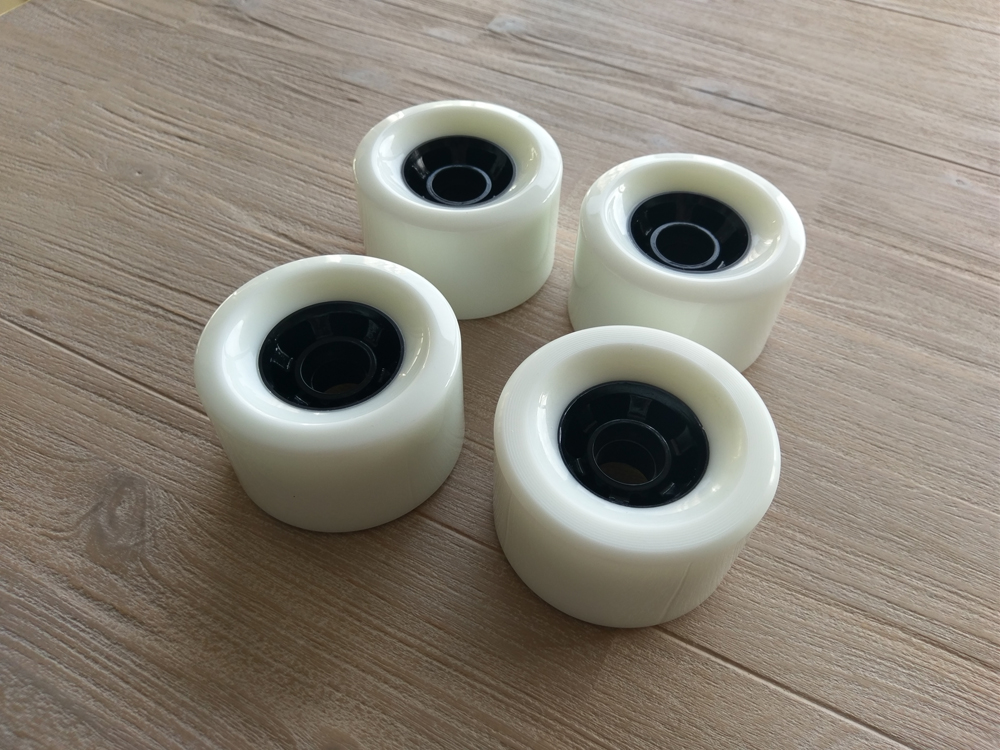 I have a riser in between there and the wheels just stay clear from deck on full lock. The deck itself is stiffer than I expected. I’m 80 kg but it hardly flexes. So perfect for a battery pack. The kicktail is just long enough to take some tight turns, so all in all I’m quite happy. Might add stiffer bushings later on, but first I need to get some motors on there!

So which deck did you end up buying? I was confused by the website becausee it also gave 3 other options on material?

Ah yeah, I got the FD100 standard. The 7 ply Maple one. That had the least flex. The composite is bamboo+fiber glass and the professional has footpockets I believe. The O&H website isn’t very clear. I should update the opening post.

It’s a nice looking board. But might be too cost prohibitive with shipping to the US. Does the wheelbase for the space cell for sure? That’s the problem I’ve had finding boards that look like this. Edit: just purchased one from sick boards.nl. They ship to the USA for 27 euros

Awesome that they ship to the US! Did you also get the FD100? I bought it here because it’s just a lot cheaper than getting it in Australia.

And otherwise I’ve got a dremel.

Yeah I got the same one you did. Figured you put some time in figuring out which fits. Thanks for doing the legwork! I had to return 2 decks because I liked the way they looked and didn’t figure to measure the center of the wheelbase where the enclosure would sit.

Beautiful deck. Almost too beautiful to cover it with electric stuff

Haha I know what you mean. I’ve been thinking the same thing. I’m considering wrapping part of the Space Cell Pro enclosure in a vinyl with the same texture as the deck. Might look cool

So yeah, I’m going to have to pay taxes if I bring new stuff into Australia when I move, so I have to rough up my Flywheels a bit before then. Also was interested to see clearance and look because these are 83 mm. Think they look pretty nice. It has a classic and clean look. The red bushings and green bearing seals annoy me to no end, but for now I can’t be bothered.

As Sean555 ordered the same deck I thought I’d show how the 83 flywheels look like and what the wheel clearance is. 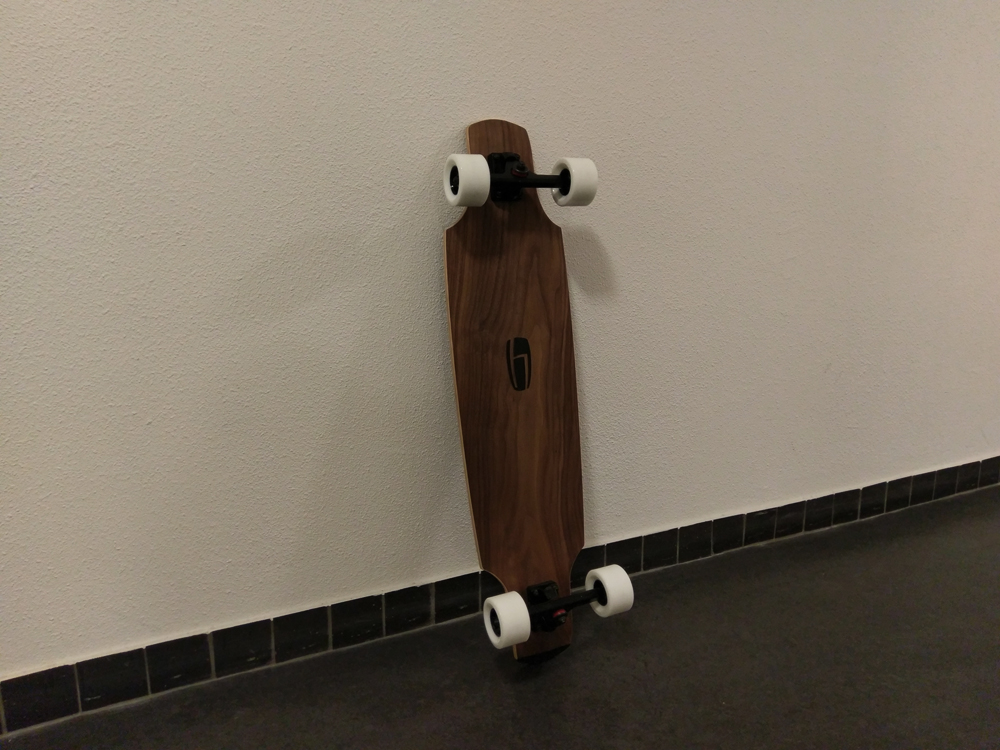 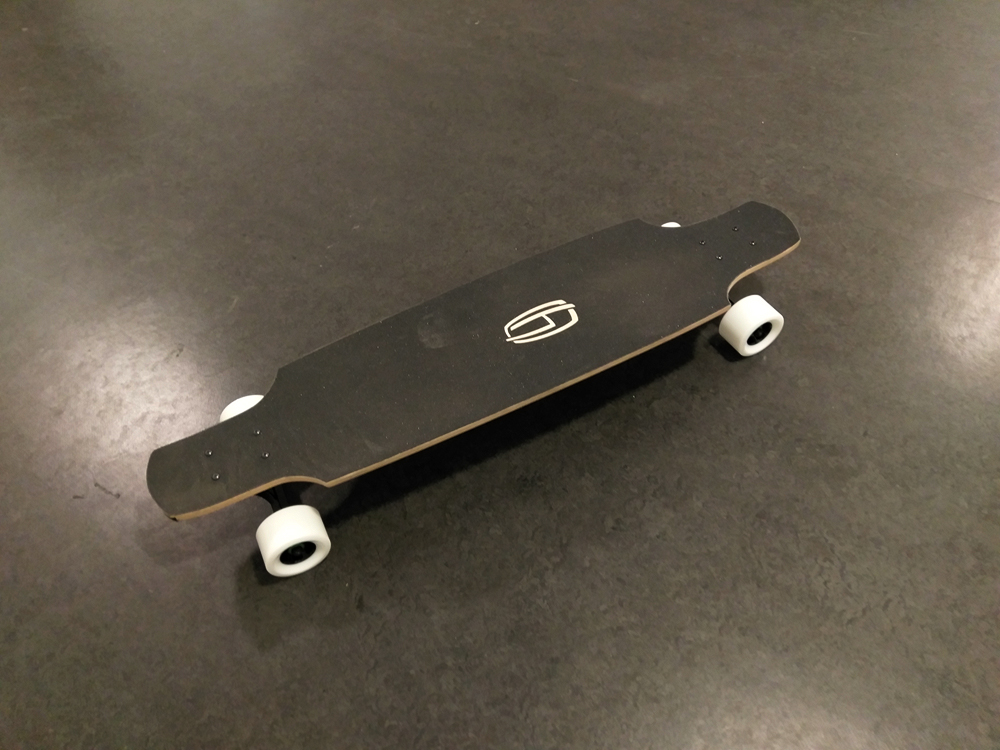 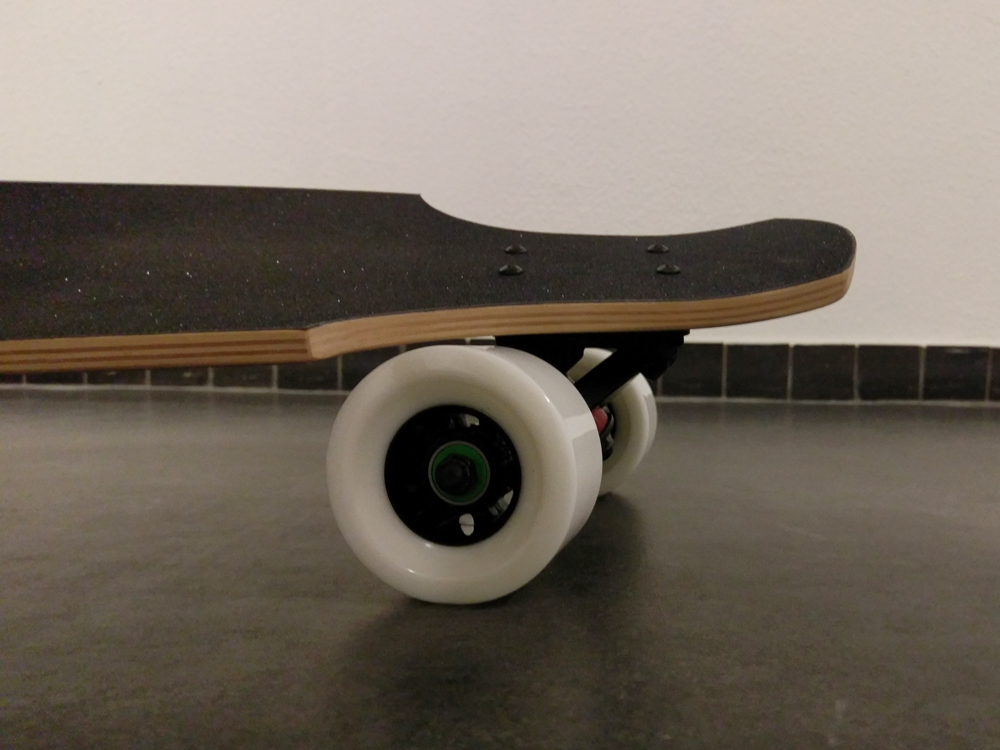 As you can see clearance is absolutely tiny on maximum angle, but I couldn’t get them to touch the deck. Only tried inside though, so on a bumpy surface it might be different, but I only have a single 1/2" riser on it now, so I’m not worried.

Just going to leave this here for now 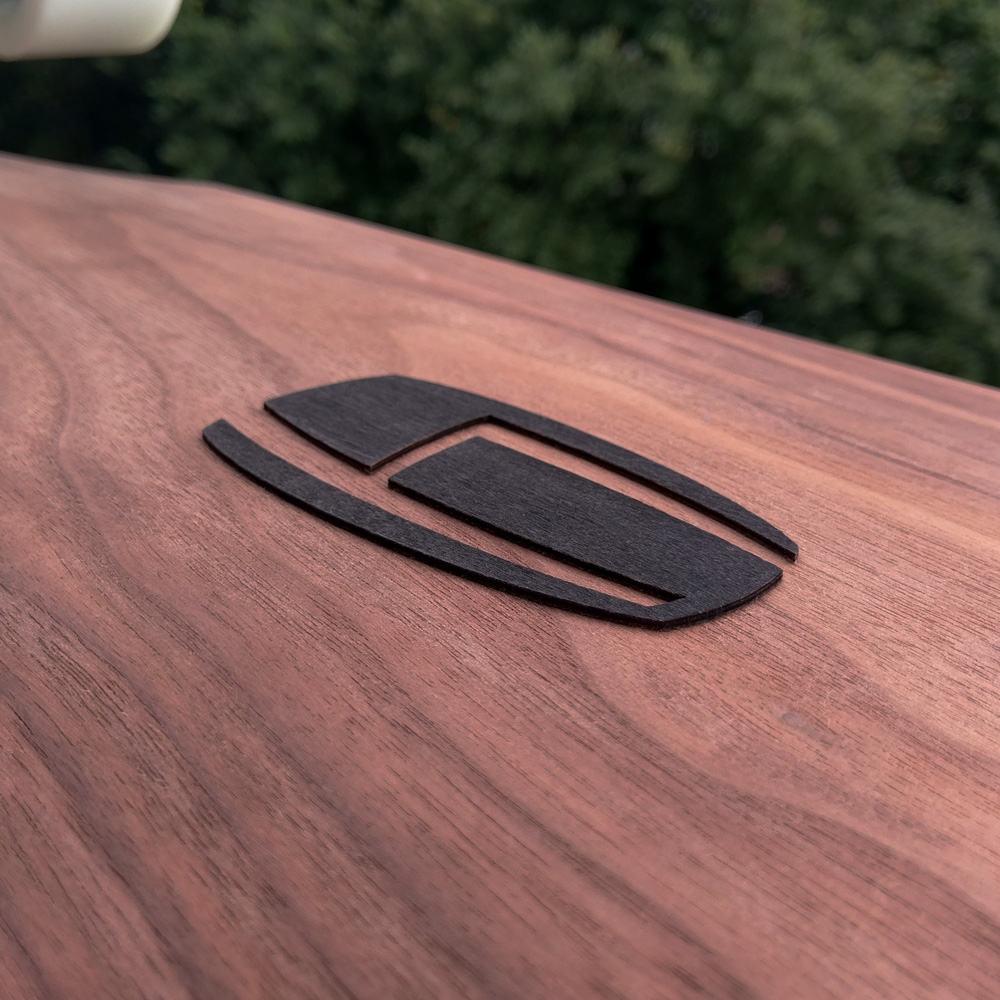 Australia = No like batteries, I’m in Sydney and travel allot as a writer, they are constantly jamming the authority stick down my throat at Kingston Smith, unlike Caisey I won’t be able to afford my own plane any time soon so I just don’t risk the hassle anymore. Keen to see how it works out. where in Oz will you be going?

Yeah I don’t plan on taking it on a plane at all. Maybe down the road I could look into something like detachable batteries if that changes. For now it’s just to get around town though and I don’t expect that to change soon.

I’ll be going to Melbourne. Just 8 days left. Can’t wait! Board is currently wrapped in bubblewrap waiting to be picked up Tuesday morning by the movers.