Why I decided to build an electric skateboard:

I loved skateboarding when I was young but stopped around 14. I am now 36, and have a 4-year-old son who is getting into scootering, so I jumped at the excuse to buy a regular skateboard, which I convinced my wife was “to encourage the little one to scoot at the skate parks”. It ended up being a great purchase as it got us out of the house doing something fun we both enjoyed.

Picture of my regular skateboard decorated with the help of my son: So after a bit of youtubing skateboard stuff, I discovered the Boosted Board and could not believe that I’d never heard of electric skateboards before! At which point I became super obsessed and needed to have one.

I could not justify spending all that money on a Booster Board (especially being base in the UK with shipping, import tax, lack of local customer support), so I started looking at cheaper alternatives (i.e. koolwheel, yuneec, slick revolutions) however each had its own drawbacks. Plus I figured that at my age making an electric skateboard might be slightly more socially acceptable than buying a ready-made one. I initially thought that the DIY root would be too time consuming, costly and complicated, as I had no previous experience with RC electronics. I think the biggest deterrent was the lack of instructions with anything I’d have to purchase and worrying about the cost if it all went terribly wrong, as apart from the forums there isn’t much in the way of guidance. However after looking at numerous esk8 videos, build logs and online stores, I realized that it wouldn’t be too difficult (as long as I didn’t try to build everything myself from scratch, like motor mounts and the battery).

So I came to the conclusion that I would build my own e-board as:

I found out that one of the major UK supplier of parts (Alien Power Systems - APS) is based in Liverpool. After emailing Bruno (the owner of APS) explaining my interest in building an e-board and my requirements he sent me advice on several different board setups that he would recommend, and told me to pop by his workshop anytime. For the following reasons I brought all my components (aside from the deck) from APS as: I borrowed a Power Supply Unit (PSU) from work to power up the VESC for the first time whist I waited for the battery pack to arrive.

The picture below is of my son waiting for the board to blow up the first time I powered it up:

The next step was programming the VECS, which was pretty straightforward. I watched several YouTube clips to find out how to program it. The hardest part was finding the BLDC Tool software for a Mac. After watching a few more YouTube clips I de-soldered my failure and soldered the 10 AWG wires to an XT90 connector instead. My next attempt was passable.

Note: Only much later did I find out that that solder contains mercury, so remember to wash your hands and work area afterwards. 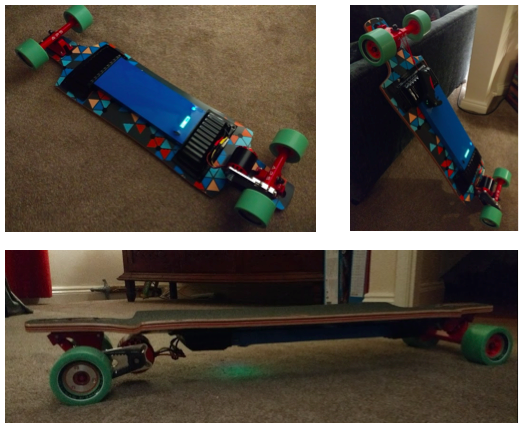 Thanks to Bruno for:

Thanks to the esk8 community and all the people that made this a thing.

After watching a few more YouTube clips I de-soldered my failure and soldered the 10 AWG wires to an XT90 connector instead. My next attempt was passable.

wow I haven’t seeen any aps builds in a longtime! seems like they have made some friends in china!

you should really insulate that connector! it just looks scary and is begging for shorts!

Thanks for the feedback. The vesc in the picture was my failed attempt that I ended up desoldering. Thankfully my next attempt was much better and I was able to heat shrink the joins.