I was getting ready to pull the trigger here and wanted to know which of these was better. The 6.6 Plus seems to have an entirely different architecture the the original.

The original seems beefier with Caps while the newer model lacks those caps and is smaller. I searched but did not find any conclusive information.

Which one of these is holding up better in the real world?

Any know issues with one vs the other?

Has the 6.6 plus been out long enough for anyone to draw conclusions? I’ve not been following too closely but I don’t think it has.

Just to add here, that form factor on the dual 6.6 plus looks extremely good. 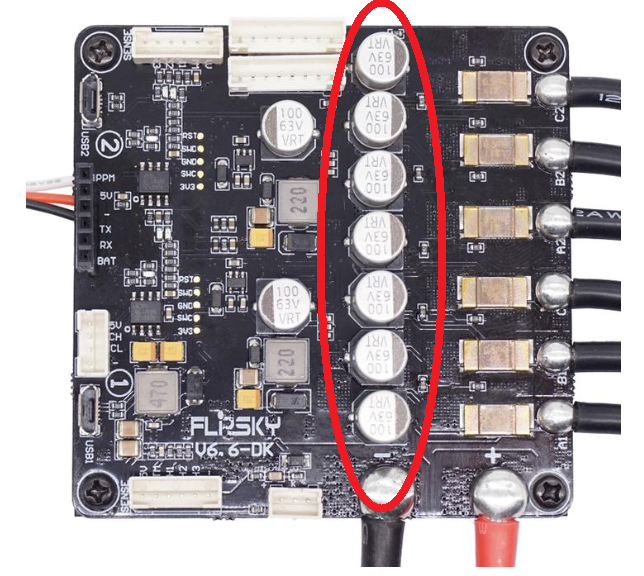 These are the caps now btw, they aren’t manually soldered anymore. Should decrease issues.

According to engineers who designed the FOCBox Unity, smd electrolytic capacitors not glued to the board will come off in a high vibration environment.

The pro switch does not have inrush current limiting, meaning it will eventually fail after a certain number of cycles.

The smart switch might have inrush current limiting, but there’s no way to tell. The smart switch is also highside instead of lowside, since they appear to use optocouplers with photovoltaic output to drive the MOSFETs.

So your saying they will fail sooner then the regular 6.6?

So theoretically we could glue those caps down and ditch the switch to make this a good option?

well y same with the new 4.20 plus. and that thing uses 2 mosfets in parallel now so it is more capable. but that switch…

I have the same question as brenternet?

@Deodand - Let us pick your brain about a competitor product please kind sir.

Can we just hot glue these SMD caps down and make potential vibration issues go away?

I’d definitely glue them. They should just be epoxied from the factory in my opinion. The unity has about 2.5 millifarads bulk capacitance, if the marking on the top is denoting 100 micro farad I’d say the bulk capacitance seems a bit low at 0.9 farads. This mostly becomes a problem under super high power draw around half speed… Not sure if this is the kind of thing flipsky tests since it’s pretty difficult to do on the bench.

Can’t comment too much on the rest of the board. I will say if you wanna support new open source software stuff get developed for the community buy your vesc from someone else.

Thank you for taking the time to look at that Jeff.

I get what you’re saying on open source development but the load is being shared here for most of us. I’ve personally bought a couple of unities for my “serious” builds and this 4.20 dual is aimed at a lightweight 8/10s kicker for my car boot, there’s not much in it price wise for me however and this board will probably end up with another unity on it but for budget builds where every dollar matters you can see the place for a simple, inexpensive esc like this.

If this was $20 cheaper it would be a no brainer

It would be hypocritical of me to be mad at anyone for it. I have bought my share of knockoff stuff when money’s tight (nearly always is, isn’t it?)

Just figured I’d mention it since obviously some of the pricing of the unity is worked into paying me to help address hardware/software issues and add new features. Remember that’s part of what your paying for and think of it as a positive thing when you buy a unity your supporting some extra dev to make cool new stuff. No worries either way

If you could get BLDC integrating to work without tuning (that is, out of the box, none of that detection stuff), that would be awesome

I have the algorithm if you want it.

Remember that’s part of what your paying for and think of it as a positive thing when you buy a unity your supporting some extra dev to make cool new stuff.

That’s what they say about Arduino, except STMicroelectronics’s entire Nucleo Ecosystem is cheaper than that overpriced (and honestly overrated) development platform X_X. And STM gives you like, 10x the hardware capabilities.

Can’t say the same about the unity. That thing is cool and the high level of integration is extremely impressive.

Trying to revive this.

So the best option out of the three for fvesc 6.6 is the original one w the large caps. This then?

I’ve only used the fsesc 6.6 dual you reference. Never had an issue with them. I’m curious about the 6.6plus but i wish it didn’t make you use the power button. Ive heard the antispark in it is trash, but that small form factor is so nice. And I’ll never wait as long as it takes to buy a unity these days so flipsky it is.

Exactly what I was thinking too. Small form factor is what kept me going back to it. But like you said, the power switch is what’s holding me back from getting it. I wonder if there’s a way to bypass it. Although, they emphasized in the description to NOT plug the battery in if the switch is not connected.

FALSE---- VESC----Specifications due to Inferior Components, You will burn out your VESC if you run this under load at specified parameters.

**This is a foolish purchase. Flipsky hopes no one will actually run bench tests on hardware### This VESC utilizes underrated components to build its VESC, which over stress components that results in overheating and eventual burnout. This board has a good design but has taken significant cost cutting measures utilizing components with increased electrical resistance thus operating inefficiently and producing heat. I have personally tested their products and have determined that if the specified VESC parameters are utilized under a real-world load test the DRV chip will overheat. Essentially what the company is doing is promoting specs that are over-clocking their hardware. Any first-year electrical engineering student can run a load test and come up with these resistance values…

Motor windings can NOT sustain specified power due to the wire composition and resistance level. Windings will burn out under loads specified. The specified torque of these two motors are roughly 48% less than their claimed values. This was tested 4 times by me and two of my research assistants. Within two hours of testing a motor one of the permanent magnet’s broke free and tore the Hall sensor wirings. These motors have potential but need to be redesigned utilizing high quality components and adhesive. The specifications under these motor descriptions should also reflect accurate benchmarks. I’m happy to provide my testing numbers if anyone would like them. Cheers……