If they actually work as advertised, these would be stupid powerful. They’re $250, and claim to do up to 100A.

Hopefully some reviews come out or someone can get their hands on a pair and abuse & review them.

They look to be decent, but the watt rating is definitely a warning sign.

The only real way to see is to test them i guess. I hope they are decent

Yeah, hub motors are usually pretty constrained in the continuous-power rating compared to regular outrunners. Usually able to handle some insane peak power, but the thermal throttling is a bitch.

I bought a pair for a cheap Chinese board. It will be using a cheap meepo v3 esc. Might hook them up to my unity for fun. Will give an update once they arrive

FYI you can get what seems to be the same here for cheaper. https://lofty-skateboard.com/collections/diy-accessories/products/hub-motor-with-rubber-tire-high-efficiency-low-heating-absorb-vibration-anti-slippy-features

Just got them. It’s the ones from e-lofty 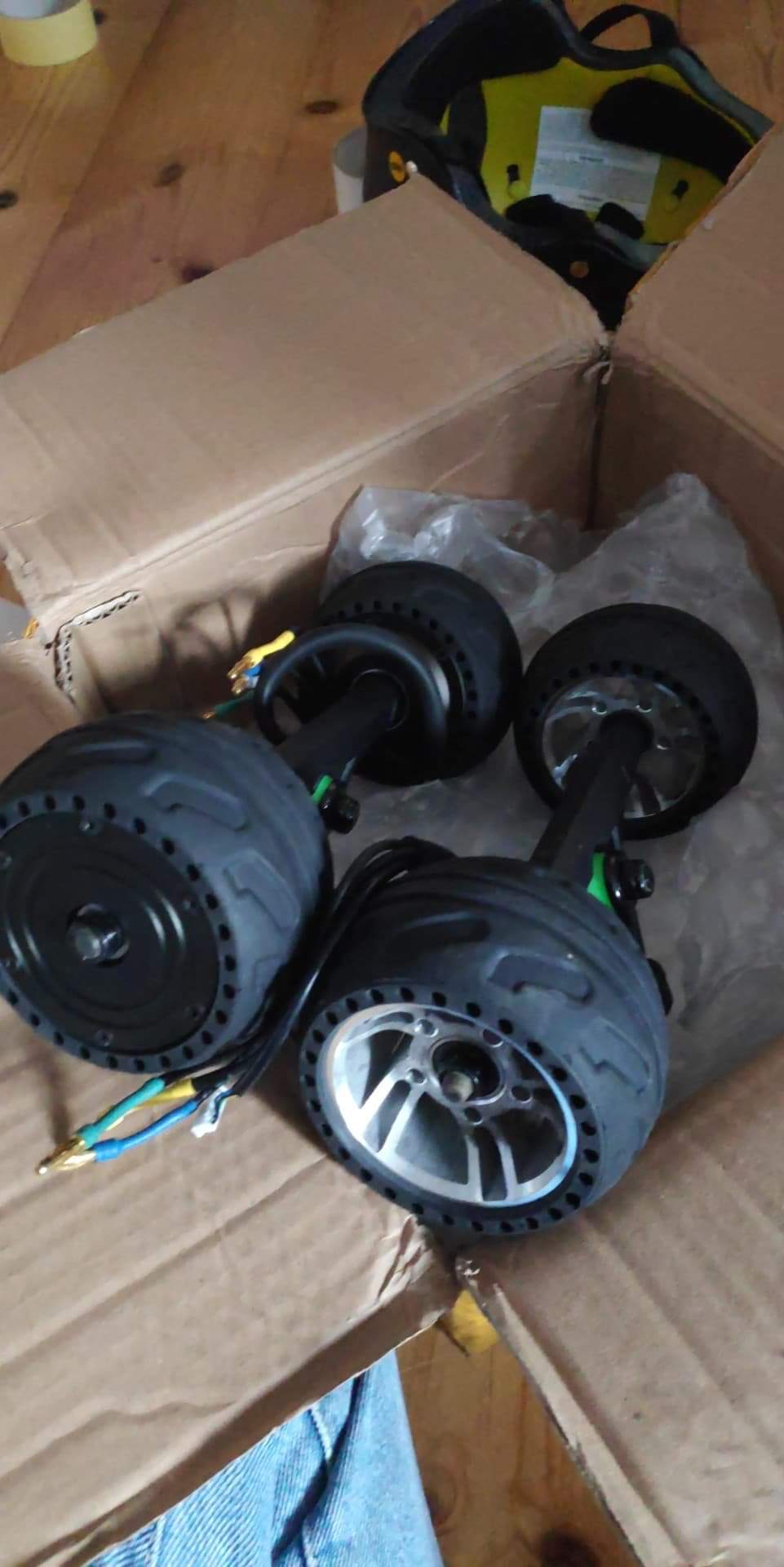 Looking forward to your findings as I’m going to use the same meepo 30a esc with it. Have the skullboard hubs which are great on wet roads but are totally poor in the torque and efficiency department. One last thing how long was shipping and was it free? Thanks and keep on rollin!

looking forward to how they perform.

It took like 1,5 months after ordering before I had them in my hands. Shipping was 36USD and I had to pay import fees of 35USD. So far torque seems pretty good. They are strong enough to drive in grass but get pretty hot too.

@dyingmoss I’ve been on 1 ride so far and already have issues… Gonna keep riding and see if it disappears.

And here is just a shitty video from the ride.

Thanks for the videos/update! JW… How’s the overall speed on them w/your setup?

Do you think the rubber wheels are helping a lot with road vibrations over normal hubs?

hmmm… maybe a little bit. Was on a pretty bad road today and it was still very bumpy. It’s quite nice being able to go off-road with the wheels though

Would probably recommend to not buy them yet unless you also wanna be a “tester”, because I run into more problems… Now the second motor also makes the weird noise.

Hey man…so how are the motors holding up??? Any problems??? How is the torque??? I have an meepo nls pro (hobbywing) and need other sleeves, which seems impossible to find…so I thinking to buy those motors.

come on legend27, give us an update!

I owned the older version of these hubs a while ago. They had disappointing power but it looks better in his video than mine were.

The rubber is great IMO, looks bad but its one of the only real “hybrid” wheels which is small, but can do light trail runs as seen. If you have rough roads or want to go to the park, your range will suffer but the ride quality increase may well be worth it.

Check elofty for a slightly cheaper price too

This is my review after about 250ish km of usage.

They are holding up okay, I guess? They are still working however the weird noise/sound is still there. The noise disappeared from one of the motors though, but they don’t seem very realiable when the other motor still makes the noise… I’m afraid that it’ll fuck up on a ride someday and I’ll be screwed…

I’ve tried to get replacements but Kenna aka Elofty doesn’t want to send me new ones. Or actually she does, but I’ll have to pay shipping, she’ll only send 1 motor even though both has had problems and it would be the same version even though she said they had fixed the issue and made a new version… Her response to me why I wouldn’t get the new ones were “You bought the old ones”…

So far not a very pleasant experience with Kenna even though everyone has seemed to love her. Their engineer also seems to be a complete idiot, since he said it was caused by the ESC EVEN THOUGH IT WASN’T EVEN CONNECTED!!! I’ve also experienced a quite big language barrier which didn’t make things easier…

I’m sorry for my frustrations, anyway… 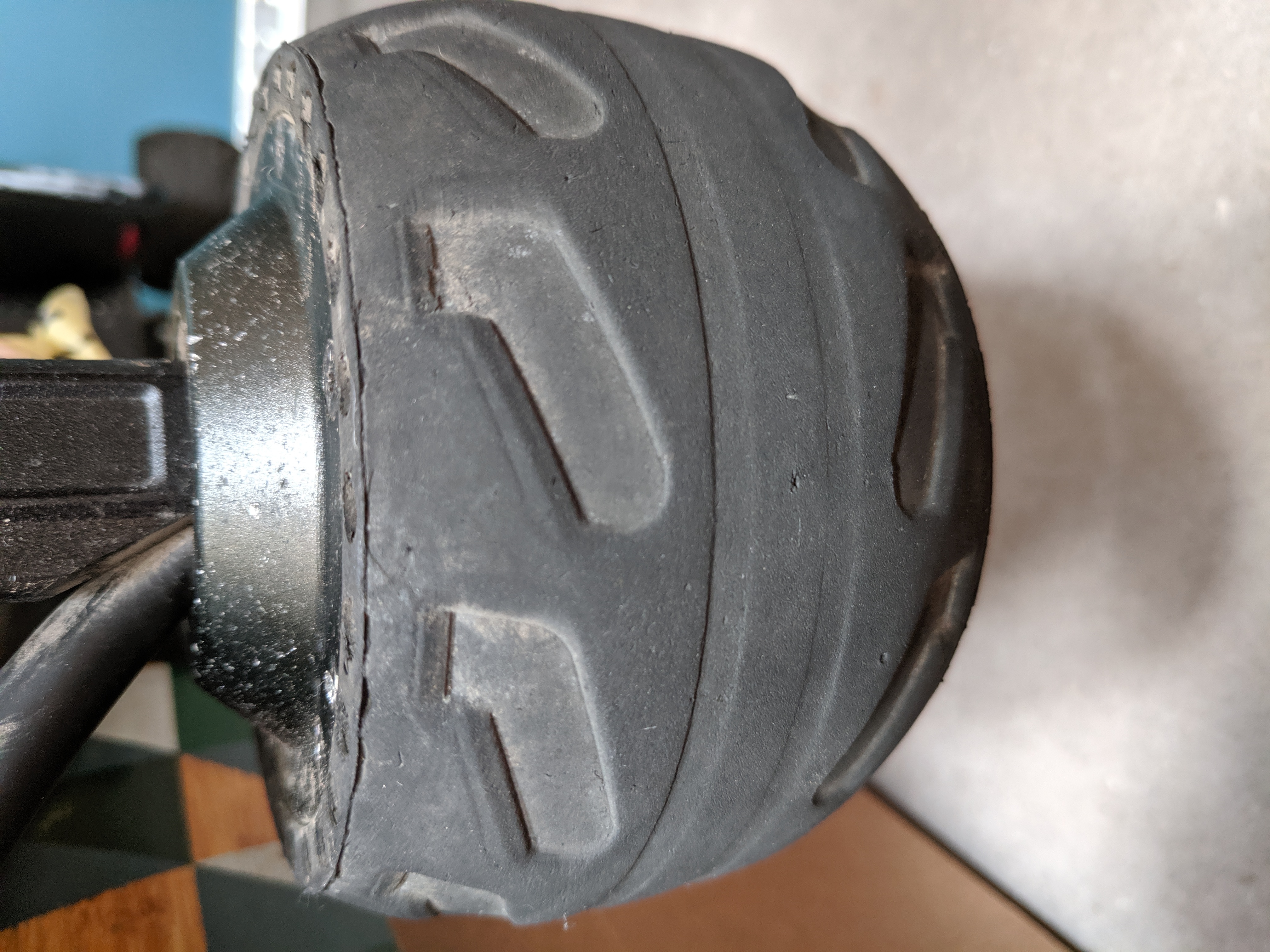 So would I recommend them?

I would probably buy the 100mm Meepo hubs instead. They seem to be more reliable, replaceable sleeves and I would be getting more range.

Please note, I’ve NOT tried the meepo hubs, but from what I’ve seen they seem good. Once these “off-road” hubs dies, I’ll buy the meepo ones.

However! If the weird noise from the motor disappeared, range was not a concern and they would upgrade the phase wires to proper silicone wires and better rubber for the hubs, I would probably buy these!

They have been really good for both off-roading and street. Hubs are not really made for off-roading, therefore I would probably buy something else if I were planning to do a lot of off-road.

I’ll keep using the hubs and once they die, I’ll give an update

Hope I got everything cover and feel free to ask questions

Ty for the answer! Both… Great review Legend27! Well its sound a little bit risky… Yee I understand u, I would be really mad for that bad service. I really need other sleeves to my meepo nls pro. Ive been riding it for 2-3 moths on almost everything. The sleeves are holding up pretty good but when its to much gravel its getting to slippery… Its also a 30A ESC and with the ER battery, 40T 10S2P, 288 AH. If i get 20km with the rubber hubs I would be more than happy.

Ownboard told me that they will release new rubber hub motors, probably the same…I think I will wait, its free shipping also… :[]