This is a “Lightning Powered Murder Board” for real! I’ve never had this much torque, crazy mad life ending torque…I love it!

OK, before I start talking about “Holy f%$king s%$t Batman!” I’m gonna stop & dial it back a bit and just talk about this thing. From the start, dual FocBox’s on 12s4p (30Q) battery pack is kinda awesome…but when you add the gear drive its crazy fast and massive torque. Here’s more info about @Kug3lis gear drive system for TB 218’s.

I have a pretty liberal acceleration curve built (thanks @Ackmaniac for the firmware, way better than stock) so it should be fairly easy to handle. The problem (and I use the word problem in the sense that it’s a rocket that has a secret desire to take you to the moon under as many G’s as it can generate regardless of your puny human skeleton and soft flesh…not that I don’t love it) is that is has massive torque and beast mode speed. Never had both before, so I’m not sure what to do

Also, and this is important, my WHM usage is at 20.5, on numies I normally get 22 when riding normally and around 26 when I’m really in the throttle. I stayed in the throttle on this thing and it was at 20.5 whm. That’s an unforeseen aspect of gear drive, at least for me.

A little about the deck. I grew up skating Santa Cruz pool decks so when I saw this SC longboard I just had to give it a shot. It has a slight convex & very little concave. That’s ok, even desirable in some builds, but unfortunately not this one. Im eventually going to rebuild this on a drop deck so I can get “locked in” better. I will likely use a LY Evo or a Red Ember (@treenutter) deck. I’m thinking about using an Evo Falcon, but it may be too short for this kind of HP. Also, the drops will help with the height, this thing is really high off the ground, it likely does not hurt stability but it feels less stable. I normally include prices and links in my build sheets, but I haven’t had time to do the links and as I may be changing some of the hardware I didn’t want to have a total cost in there yet. I’ll update as I get closer to done. 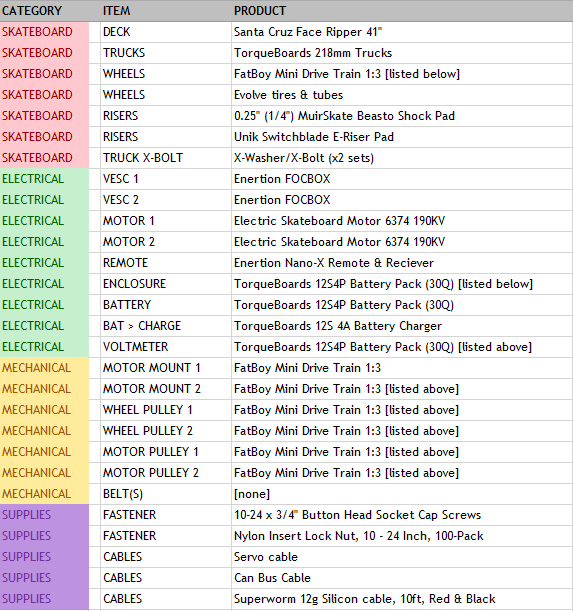 I figured I’d share my calculations with you guys, ya’ll can double check my figures too. 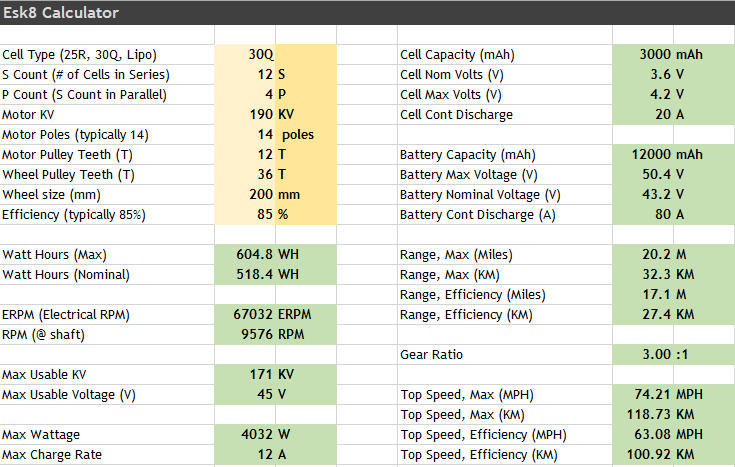 BLDC, the torque is insane and the gear drive is pretty loud, so no benefit to FOC. Thanks

I have a 12s3p deck but it’s a mono and cimfig’d pretty tame. This is my first 12s4p with duals…but the gear drive is the big difference. Instant torque, no drag, frikkin insane.

wtf 120kph? thats a lot of unused speed you could have even more torque if you could reduce the great even more

Yeah, I don’t know what I’d do with more torque. I can hit 20mph uphill in 7 seconds. It really is insane. Thanks

Nice. All i need now is a gear drive for surfrodz.

Im waiting on that myself brother

Surfrodzs are too narrow not enough spacing with 6374 motors

Or if you get your own hangers made then you can have them be as long as you want.

I will likely use a LY Evo or a Red Ember (@treenutter) deck.

A little update as things have changed a bit…

So I pulled a stupid and set the bat max on my primary vesc to 50.04, I don’t have a clue why I did that other than the coffee make was broke. Anyways, that cause all manner of crap. Obviously the board didn’t work on a fully charged 12 pack. I got it to work today and figured out that I pulled a stupid and now everything is back working again.

I swapped remoted, the Nano-x just doesn’t have enough travel to give me the control I want for 12s and Gear Drive. I’m running the tried and true Benchwheel now and its much better.

The motor pulley slipped, had a grub screw come loose. Cleaned, re-applied loctite and re installed, hopefully that resolves that issue.

I swapped decks to a Landyachtz Evo. The 12s pack in the enclosure barely fits, but it DOES fit, so that’s kind of awesome.