and probably way too many stupid questions.

haha we all started in the same place as you, so nothing is a stupid question!

as for the remote, you have two basic options, and people who will try to pull you either way: wii nunchuk 2.4ghz rc remote

nunchuk first a wii receiver (for the nunchuk) is sold here: product/wireless-wii-wiiceiver/ pros: compact, light, cruise control cons: can have sudden drop outs… this is the main reason this remote has not won over all the diy eboarders. That said, the issue is being fixed as newer versions of nunchuk PCB’s are getting released specifically to fix this problem.

2.4ghz an example of a popular one here: http://www.amazon.com/FlySky-FS-GT2B-2-4GHz-3-Channel-Transmitter/dp/B00FS2U9BA/ref=sr_1_4?ie=UTF8&qid=1451789234&sr=8-4&keywords=rc+remote pros: reliable!!! turn it on, it instantly pairs, and you could control your board from 200 feet away if you wanted too… it just works cons: it is a bulky rc remote… with a little wheel on the side too. The Badwolf 3D printed enclosure can solve this problem, but it is one more step to take and requires taking apart your remote.

personally, I’m all for the 2.4ghz remote- reliability for dayz

Enertion now has a 2.4ghz remote that also has cruise control, a rechagable battery, and is compact. Only problem is it isn’t released yet… but it should be soon (within the coming weeks).

I’ve been reading this thread recently, and particularly interesting comments from lowGuido about the nunchuck controller:

What is the best 2.4GHZ controller for VESC?

I just tested out my Nyko Kama with the 4.10 VESC and 2.3 BLDC. The cruize control is drastically improved and its working like a dream, very smooth speed increases and decreases. It seems like allot of work as been done on the programming. However...

@OGP - Let me know how your hub motor setup works in SF. I haven’t yet set my hub motors up just yet.

forgot to mention yours in the summary

I’m a huge fan of the GT2B remotes. Dirt cheap and ultra reliable. Yes they’re big, but they weight nothing, so who cares.

My only recommendation with those is that if you live in a police brutality area, i would suggest painting it a bright color so that it doesn’t look like you have a gun in your hand. I have a reputation for dark wit, but i’m only half kidding here. I’m thinking of painting all the ones i pair with my builds because kids are getting shot in my area over skittles and hoodies and shit and electric skateboards just don’t need that kind of horrible press right now.

@cmatson I was just thinking that someone needs to do a “controller roundup” and here it is! Nice!

hey… if you use that @torqueboards remote and plug the the steering channel in instead of the throttle channel could you use your thumb on that wheel instead of that god forsaken trigger?

@lowguido yes you can, I’ve done it and it works, although it is slightly awkward holding it in that position. It’s actually begging for a mod… Make the controller encasement easily to hold with the wheel in between the pointer finger and thumb. Hmmm maybebe I’ll try this for science once the winter hits and the snow makes riding impossible.

So much pressure to make a good decision on that controller

. It will be the last thing on my list. Curious what @lowGuido comes up with. I’m leaning towards the nunchucks out of form and space efficiency but then again I’m afraid of of this happening: 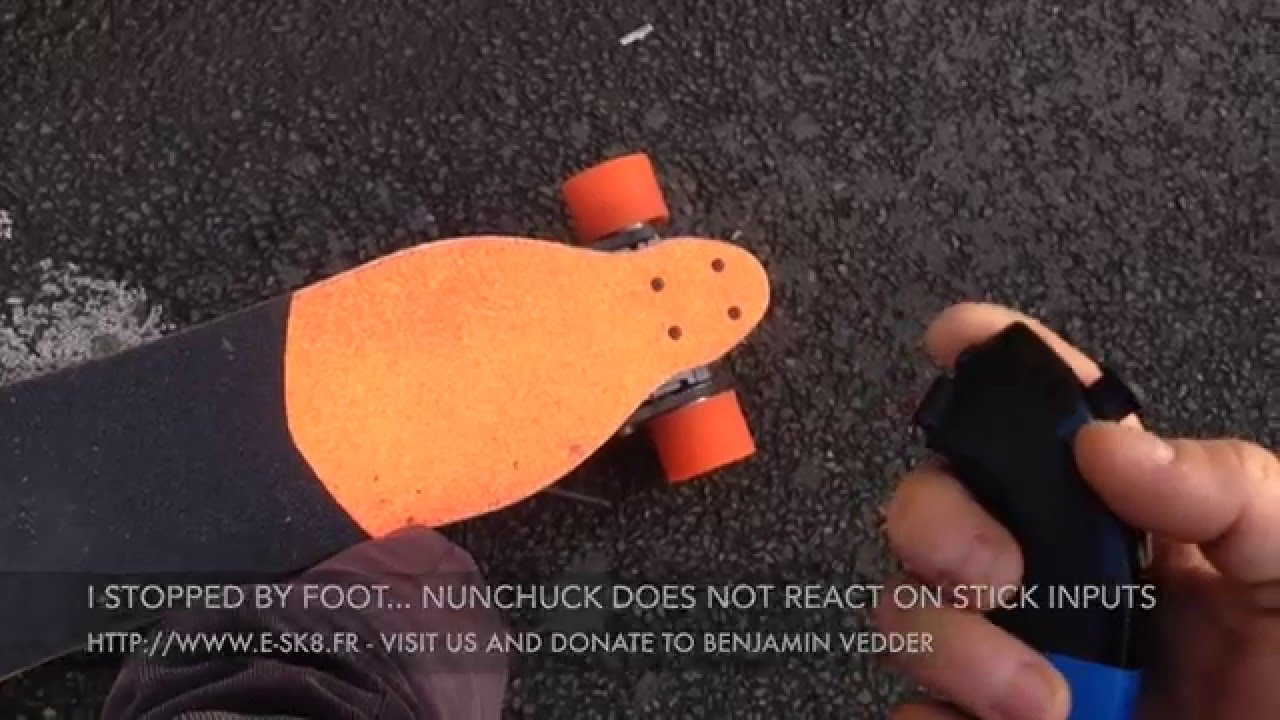 This can be avoided if soldering? Why wouldn’t anyone solder their wiring for the controller?

seriously… solder ALL THE THINGS.

I cant stress this enough. any plug on a skateboard is a possible failure, and therefore a bad idea.

even if you are not using a nunchuck, solder everything

@OGP I agree with @lowGuido about soldering all connections, he’s a soldering BOSS and knows his stuff! But there are more issues with nunchuck\vesc than just the physical connection, folks have also reported problems with radio interference. This is why others are designing a replacement PCB for the nunchuck encasement. @chaka is working on an implementation of Vedder’s nunchuck PCB so hopefully some good things are on the horizon!

My personal experience has been that GT2B or the mini 2.4GHZ from @torqueboards are rock-solid and I’ve only had fun and safe rides when using them. I used a nunchuck for about 15 miles. The first 5 were good; a few weird hiccups, and slightly buggy cruise control, but I loved it overall. I really appreciated the DIY spirit of using a nintendo controller! Then I started to notice random dropouts.

Don’t underestimate the horror of having your board dropout while you’re traveling at a moderate pace (12-18MPH). When the signal drops the resistance from your motor and belt jerk your board backwards while your body continues to travel! You need to Parkour your way to a stop by rolling on the ground, or run it out, if you can. This can be really dangerous! Emergency Room dangerous. There is no controller cool enough to risk a fall like this.

From reading through the forums for a while, and based on my use of vesc\nunchk (this is without a wiiciever, which may mitigate some of the error), in seems that nunchuck components can vary in quality. Some people luck out and get a “good one” and others get a dud that works unreliably. This might be due to manufacturing tolerances that aren’t tight enough for human vehicle control, but work out OK for playing Mario Kart. It might also be the way that VESC software interacts with the varying nunchuck hardware. Soldering can help if the issue is with physical dropouts, but there are other problems soldering doesn’t fix.

My advice would be to start with a GT2B and keep an eye on the upcoming new controller options. @onloop’s new one looks great, the new PCB for nunchuck looks good too.

@treenutter One of my suppliers offered that “backfire” remote to me. I pressed them for some information and it is also bluetooth so it will likely have the occasional drop in signal like everything else using bluetooth. Time to engineer a proper spread spectrum transmitter to fit into the nunchuck case.

@chaka that’s interesting I was under the impression that it was using a radio tech similar to GT2B. I know that 2.4ghz can be used for a variety of purposes, including bluetooth.

@chaka what’s your preference for currently available controllers? @OGP posed the question and we’re trying to help him. Let’s assume that the emphasis is on reliability and safety vs cool features.

In my opinion nothing beats spread spectrum. The gt2b being the most reliable/affordable, stay away from the quanum.

Bluetooth is great for transmitting data but has its limits when speaking of uninterrupted signal. Yes bluetooth uses the same frequency as spread spectrum controllers but the signal is handled in a completely different manner.

I think the gt2b with badwolf enclosure is what I will do on my upcoming build. It is compact, yet reliable. Though I am interested in Jasons’ new controller.

Here is the receiver design for the china brand remote. What I find interesting is the way they have the 24v routed through the pcb. It looks like they might implement a wireless power switch in the future. You can see the nrf24l01 transceiver in the top left corner, same as the Nunchuck-RF Mod so it is indeed bluetooth.

@jacobbloy It looks like a single sided pcb, any thought as to what they have planned for the 24v on the pcb? This is the China remote I got from helloskate about a year and half ago, it works great, but has the voltage inputs as well I bet that extra input is for lights.

Also for remotes if any one buys that 1/32 or 1/36 RC car that has the remote that torqueboard sells you have you the esc and receiver from the car direct just but soldering 3 wires to the pcb. photo

For what it’s worth, I noticed that Carvon have the exact same transmitter as Enertion’s listed on their store.

interesting. i feel like i need my own remote now. lol