Has anyone ever put a drop down deck (ex. LY Evo) on Trampa trucks with the UNiK 30° Riser, and used regular PU wheels instead of pneumatics?

I’ve been seeing a lot of builds here lately where Trampa trucks are fitted with those massive UNiK 30° Risers, and then they always have larger pneumatic off road tires, which looks look very very cool, but I was wondering what it would look like, and if someone has done this already, but I would like to see instead of a flat deck which is all I’ve ever seen, which also keeps you standing quite high compared to most other boards…I’d like to see a drop down deck like the Land Yaughts Evo, or something similar, and I addition, instead of having 6" tires, maybe use 107’s, or 97’s, or the 100 MBS Off Roaders. I think that would look pretty damn cool… So anyone know if this type of setup has been done? Would love to see some pictures…

Soooo… like the Trampa Street Carver? The tipped edges kind of make it like a drop through height wise i’d imagine.

Well sort of. The reason that normal boards need that massive riser is so that the Trampa trucks work with a normal board. You can’t just use Trampa trucks on a normal street longboard, because the trucks have to mount parallel to the ground essentially. The Trampa deck truck mount part is angled, like 30° so it doesn’t need that riser.

I mean a deck that drops down, not arched up like Trampa decks, and one where the trucks mount parallel to the board / ground (like an Evo for example.)

I know what you mean. Well a dropped deck with angled risers would be a lot of extra steps i think, but it might look cool on an Evo.

@Deckoz Ok, your not getting what I was saying and way over analyzed the Evo. I just used it as an example. If you’ll reread what I said, was a board where the truck mounts parallel to the ground, so think flat, 0° on both sides of the deck.

I didn’t over analyze the evo… I just made sure you knew the Evo had a +15 and -15 degree rake…and that trampa trucks are already unstable at 35° at speeds.

Plus I’m sitting on an Evo Just imagine this board here 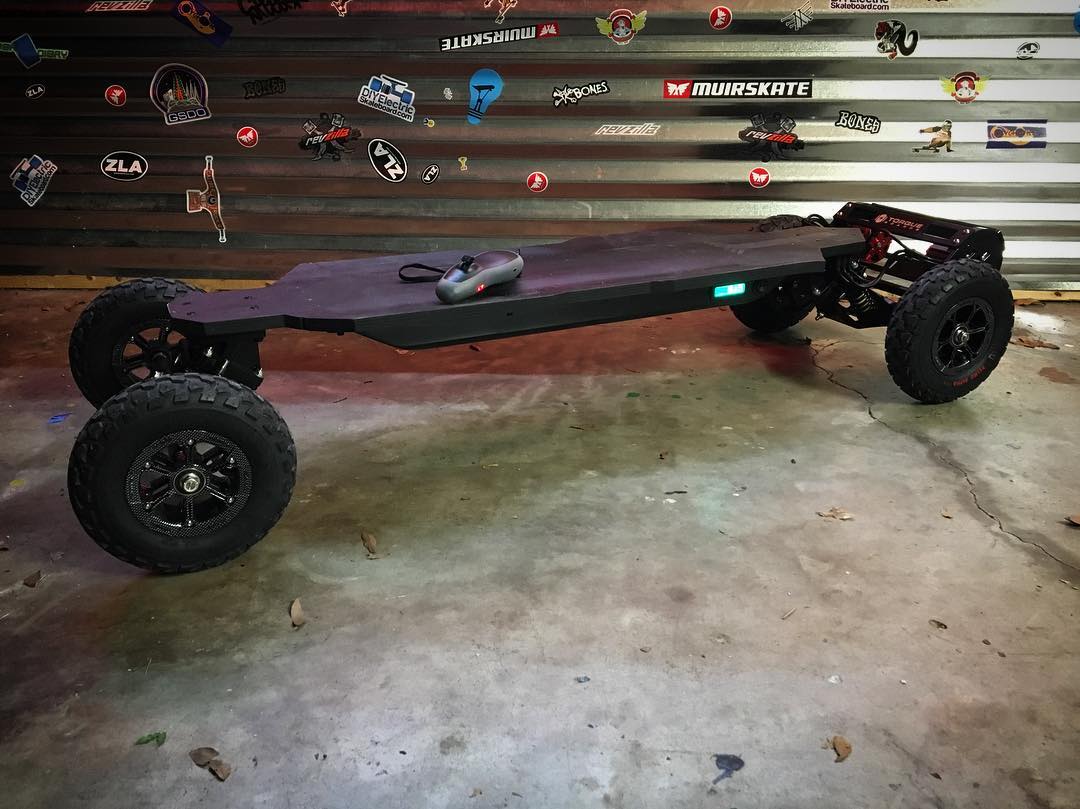 Now instead of a flat deck, and pneumatic tires, replace with smaller PU wheels, and a regular drop down deck, like this for example https://www.electric-skateboard.builders/t/no-words-just-pictures-delete-words-use-pm/2992/1418?u=tuomalar Look at this. I think randy never finished this one though.

I think the question is…why? All you are achieving is to use trampa trucks when there are much better trucks out there already made for longboards. And if you are going to put thane on them, that further exacerbates the confusion surrounding this question.

Just get some 200mm surf rodz, way better than Trampa or MBS for that matter when talking about a longboard. Or if you just really want that mushy feeling get some Evolve Gull Wing clones.

Well that’s not exactly what I was taking about or looking for… But I guess In essence that is kinda similar to what I’m looking for.

Like imagine the last pic of the board I posted, and add a set of Trampa trucks with the UNiK 30° Riser, but keep the wheels it’s got, and that’s what I am looking for.

That’s a valid question, and all I can say as to why I brought this up is I find it odd that so many people are using those risers and trucks on a flat deck along with large pneumatic tires, rather than a drop down one with PU wheels. It’s just that they are riding so freaking high off the ground, there’s gotta be no center of gravity that high up so turning sharply seems almost dangerous… I dunno, I just find it a very odd setup…

It’s not so much being high…

It’s the distance from deck to pivot axis that determine your leverage.

Its weird, but you get used to being so high off the ground. The Jet Spud 29 is inherently stable, so you get a little forgiveness there.

Honestly, I don’t really see a reason to do it on anything other than a Spud 29. The idea is to get a huge beefy suspension system on a tiny freaking bullet proof deck so you can abuse the shit out of it and it still have a chance of hanging in there :). Im building one, waiting on parts of course

Lol, that is very sweet, but I simply mean a deck that drops down in the center, like this for example.

Not a flat, uncurved deck, one that drops down between the trucks like that awesome board above. Lol I’m surprised this question of mine has gotten commented on so much haha

What would be the reason for this? Just seems more practical if you’re going to use Trampa trucks with that huge riser then I would think one would try and lower the deck so you’re not riding so high off the ground with very little center of gravity… or whatever, lol. I dunno I just though I would ask this cause every single time I’ve seen a picture of those trucks not on a Trampa deck they have those huge risers along with big wheels and it just seems crazy to me to ride so high up! Lol… Looks super cool though, either way!