I’m new to esk8 but have spent the past few days reading and learning as much as I possibly can. I have a penny/nickel board and I’m trying to make it electric. I know there are other penny builds on here and I do admire them, but I would say my main focus is more on the aesthetic of the board rather its performance. I’m not in anyway looking to compete for the fastest or greatest build. I just want to build one that works and works well. I recently got two nickel boards for me and my gf to ride around campus and we like how portable it is, not having to be such a hassle to carry around in class. But I especially like the colorful designs our boards have and don’t want to take it away. So my goal is to have a really compact setup and maybe paint over the enclosure to match the design. I’m deciding to use hub motors (single or dual) not sure which would be more practical. I want them to be small so it doesn’t stick out as much, like around 70mm. However only 70mm hub motors I find are maytech and some other cheap ones on aliexpress, any suggestions? I want to keep it a small design, so I’m not interested in 90mm hubs. Ima be using a DIY Li-ion pack, possibly 6s2p or 12sp1. which is better?. Also willing to go for a vesc if that seems necessary. Even though I don’t care too much about its performace, I also don’t want to build something that will break on me instantly. I want a reliable eskate that will take me around campus but still look good. what do you guys think? any ideas for this hub motor setup? anything will help. Thanks

This is the board I have in case anyone was wondering. For hub motors you’ll need at least 2 in parallel, so 6s2p at minimum. Do you want this to climb hills? Do you want to cruise on flats? What do you want for top speed and range?

Also, any hub motors you find will likely have 180mm trucks, which will stick way out as they are intended for full size longboards. Even on a larger nickel deck, the trucks will be awkwardly wide.

For speed I probably be ok with around 10mph. For range at least more than 5 miles. Im thinking of investing in higher quality cells to help with that. As for the truck I was thinking if i end up using maytech hubs then i could modify small trucks to fit them on like @Kaspars showed in his video tutorial.

Those specs should be pretty easy to achieve. I’m actually doing a build on my penny board right now, if you want to check out the thread https://www.electric-skateboard.builders/t/100-piece-of-shit-build/36764 I’ll let you know how that ESC-Battery combo works out, but from what I can tell so far, it should be able to get you well above those specs and for pretty cheap as well.

Just so you can kind of gauge size, I have 76mm wheels on my penny nickel and they don’t stick out. I was basically looking for something similar to what you’re looking for. Originally I got hubs but they were not dependable. After lots of trial and error, I’m using a separate motor. Check out my build log for more details. I should go with this set up which I pour a lot of research into. Paris truck 150mm hanger, measure 8.75 inches axle to axle. DIY HUB motor SHOULD work with this trucks. Maytech HUB has their own truck for their HUBs and a 180mm truck will look weird on your penny board.

But honestly, what I think you should do is buy a cheap electric pennyboard or something. Use it until it broke down then modify it to your liking. Reason is they already have on/off button, some type of bms and a charger. With this, you can just buy new battery and motor if you didn’t like it.

This is purely my opinion tho.

Oh thanks for the suggestions guys. @Sapphirinia @pennyboard I have been looking at your builds and a typical gear, motor mount setup is pretty tempting. If I don’t decide on a hub motor I might just end up going that route, although i’m trying not to and keep it looking clean.

@gee i actually was thinking of doing that and just transferring all the components to my penny board since most of them have the same specs I’m looking for. Just don’t know which is the least crappy one of them all, out there. But then again I feel like that’ll just take out all the fun of it being DIY lol.

This might be me being too picky, but the only reason I’m still debating on using the maytech hubs is that they only come in red. I would like to stick as close to its original design so it doesn’t even look like an electric skateboard.

like I found these on aliexpress, I don’t think these are as good as maytech’s but if I do buy them do you guys think it could deliver what I’m asking for? or like what would be the best setup for these?

well you have to consider the wheel is gonna worn out in time and TorqueBoard sell you the replacement for the wheel. I don’t know anywhere else sell that sell replacement as of right now. That’s why I avoid buying small HUB because I don’t know where you can buy the urethane wheel and I heard that they get really hot.

These might be a good option if you don’t want much speed and you don’t need lots of torque. These and a eBay dual esc would make for a cheap and light small penny board. Just make sure to use at least dual motors otherwise these will probably burn up. (I haven’t actually used these and I don’t know if anyone has so you will have to test them. But they are super cheap so it’s worth a try)

This board is a good base on what kind of specs you want.

thanks for the suggestion guys, it’s really starting to get me excited about this build. I guess the final cost might turn out cheaper than expected. it seems like a simple esc should do what I’m looking for. any good ones you guys would recommend? I’ma start ordering parts and maybe start experimenting with different one. I will post any picture of updates cuz I’m pretty hyped about this build and I have a feeling that although the specs might not be so attractive the board when finished is gonna be a beauty.

I bought a cheap chinese board and stuck it to my Penny! Didn’t take long at all, though it is very much a toy. 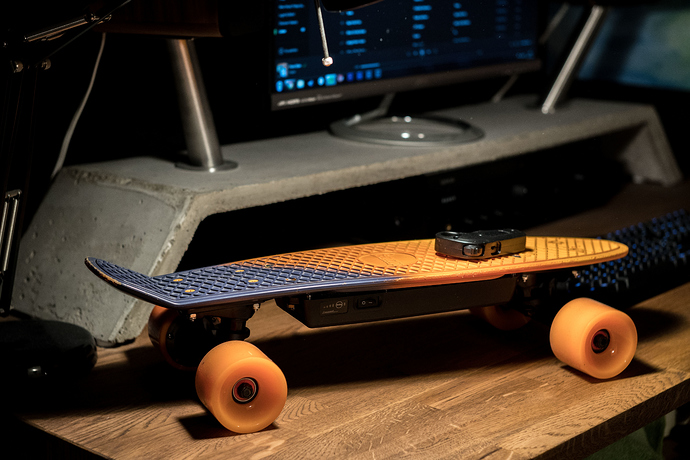