Hi guys, I just launched my indiegogo campaign for my own electric longboard company FrankBoard

ok, let’s just forget that this is a basic build that is I think below average here… It just look like diy build that will be (that’s the theory) produce in larger quantities. It seems for me that you don’t use a carbon fiber deck in your prototype right? You should show a detailed pictures of carbon deck, cells with samsung branding ect. Meanwhile you have really bad renders and one diy board in your clip. Sorry but you need to put a lot more into it to be successful.

So what makes your board different than any other pre made board on the market? You talk reliability but have no mention of anything that is inside the board, other than a brand of LiPo that apparently doesn’t exists . If you were using reliable parts then you’d be more than happy to advertise what parts they are.

the current prototype IS carbon fiber, it is 2 layers of 0.5 cm carbon fiber in polystyrene laminated together, and the box is aluminium on this one. the prototype of course won’t look as pretty, or as “not DIY” as the final product, mainly because it IS DIY, that is why it’s a prototype.

I may sound like a dick now, but your board looks like one of those 500 dollar budget ones with the motor flipped the wrong way around and made in a rush.

if I were you and really wanted to have success I would get some funds together, contact suppliers get something REAL made that shows its true quality read up on DIY and then make an Indiegogo.

You don’t go up to a company in runners and a hoodie asking for a job? No, you show yourself from your best side so should this.

what makes it different is the value you’re getting. these are huge batteries for this price range, it is made from carbon fiber, which doesn’t even exist in this price range currently. The interesting parts (all the electronics except for the ESCs) were designed by me, and will be produced according to my design, so that doesn’t have a brand that I could brag about, that is my own. The wheels are also own-brand, the belt is optibelt HP (quality german kevlar reinforced timing belts). The motor has japanese bearings, the chargers are not cheap plastic but aluminium with multiple safety features, and they are all fast-chargers as default.

Ok so how you will transfer that to “mass production”? You should have a least a factory that can make you one or two usually expensive prototypes. Bro I wish you all the best! It’s hard to explain on forum everything but what you can see is collective knowledge form people with experience that your campaign is maybe to early.

OK I am stopping but this is just too funny, until real photos of at least electronics, those Samsung batteries are shown I wouldn’t invest a single dollar in this

All of that means literally nothing.

Your acting as if carbon fiber is amazing and wonderful and should be the main selling point, but in reality pure carbon decks are not that great to ride.

Truth is, if you’ve actually put in the work in to design and make your own internals then you’d be posting them and showing the internals off if it was such high quality. Until that is proven I’ll be assuming this is another cheap board stuffed with cheap Chinese crap in the attempt at a quick cash grab.

Well this was a fun thread.

Everything mentioned here should be taken as positive encouragement and acted on, apologies for shitting on your dreams. Board looks pretty standard and some stuff doesn’t add up.

Hit Facebook, you’ll be a millionaire by the weekend.

Frank board! lol wait till trampa gets a load of that

Hes a brave lad I’ll give him that.

All of us hear almost daily “you should open a company and sell these”. That doesn’t mean you have to or that it is a good idea. If you want succes invent something new or do it better and different than others but what you want to offer sounds and looks like a joke. TBH your one wheel burn out made my day.

I’m not that guy posting such negative comments but I had to. Take it positive and rethink your plan, it’s not gonna work.

Why is it, that every time someone has a name ending in “Tech” I feel like the community is about to take a hit?

Haha this is one funny campaign, also, is it just me or the guy in the video is not having fun at all riding the board. He also looks like a complete noob and its just annoying how stiff he is and how he’s not wearing a helmet. and those abec clones are a freaking joke lol.

Also the deck is just "2 layers of 0.5cm carbon fiber and blah blah blah, what is 2 layers going to friggin do lol. The whole board looks like someone first DIY build, actually there’s a more first DIY builds that look wayyy better than this one, the 1 wheel burnouts on the dirt is just stupid. The batteries are huge, cough diyeboards 10s5p cheap n easy. “The wheels are own-brand” They’re just some stupid chinese abec clones. And belts aren’t a thing to brag about, I can get kevlar belts like anywhere people sell belts. The motor has japanese bearings, like its a thing to brag about and the bearing thing gives you 10% more speed, the fast chargers I can just get some off amazon.

Long story short, the board looks pretty bad, there’s really nothing to brag about. It looks like a load of shit. Sorry if you see me as a dickhead but this just seems like bs to me.

This is almost as good as the truck stabilizers.

Good luck on your campaign bud.

Here’s my first DIY build. It’s a prototype, so be nice. Will anyone back me if I start an Indigogo campaign? Costs $200 less than the $1400 Frank board. I want all your monies… 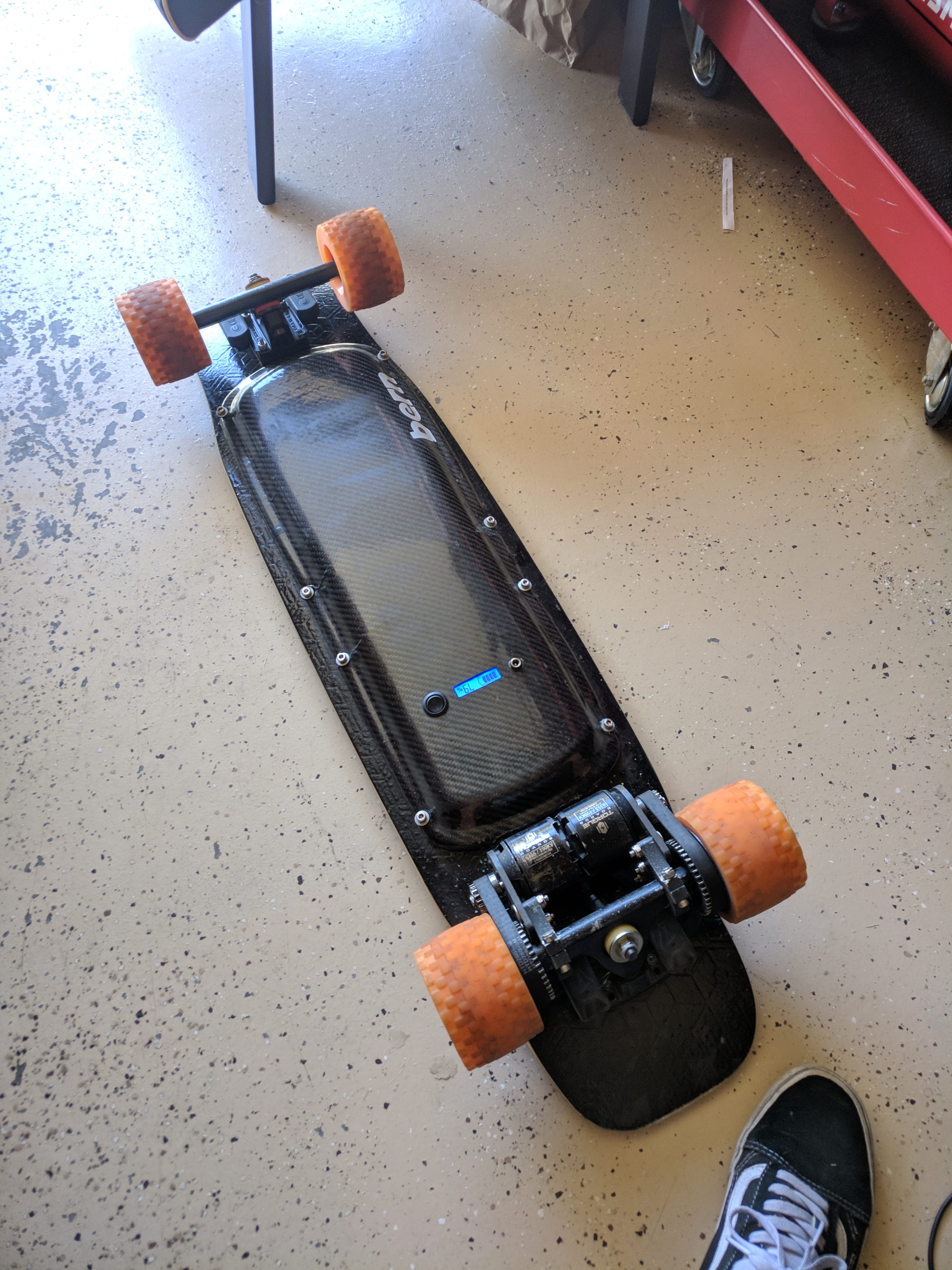 P.S- I’ll throw in 2 aluminium fast chargers with every purchase. 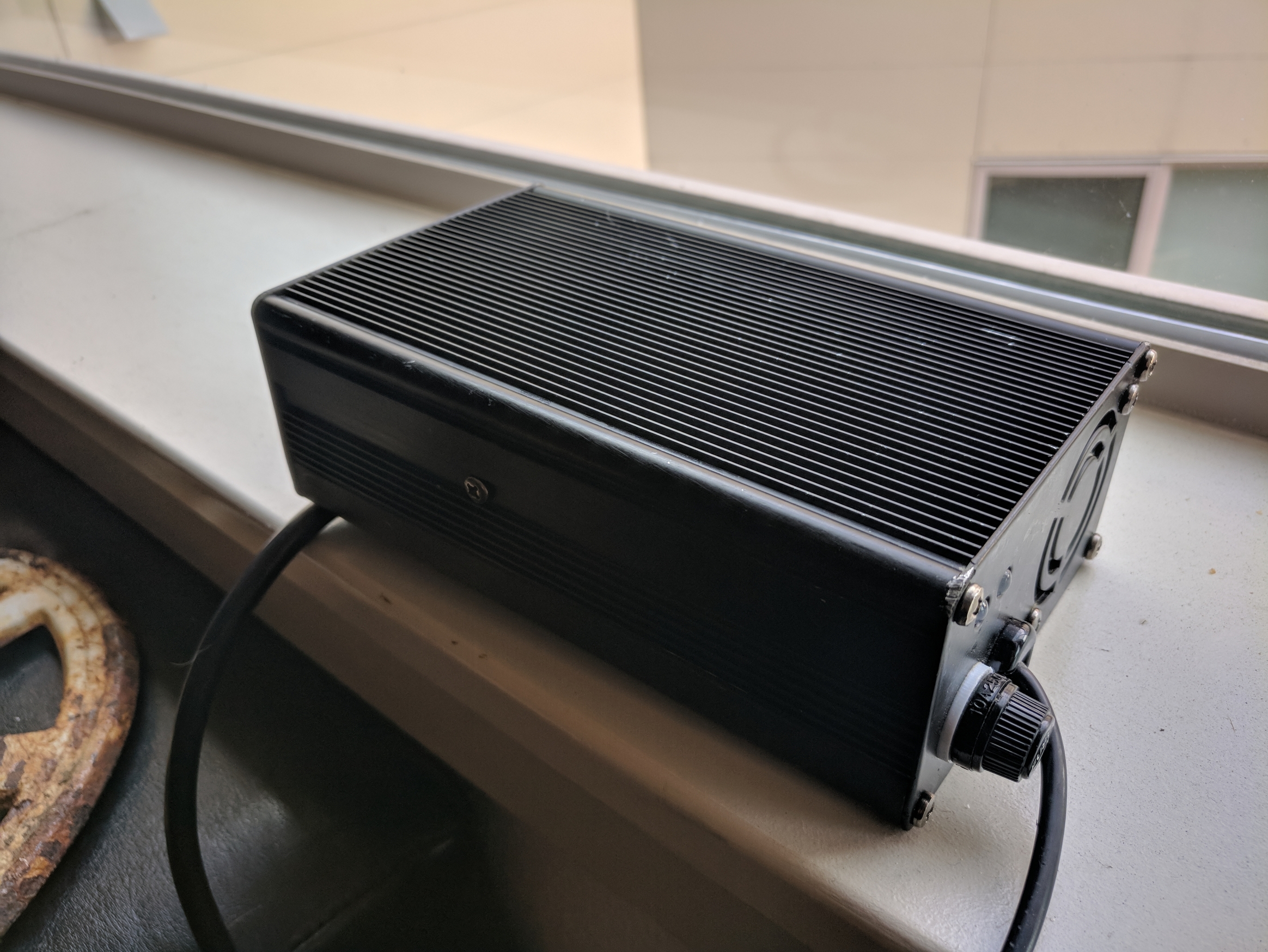 How much for that single shoe in the picture? I would indiegogo back that up.

Maybe we should make our board and do kickstarter