How do you package your 18650 cells or repack lipos?heatshrink?

how does everyone package their cells or repack their lipos? planning repack my 5s 5000mah flighmaxs into 2 lines of ten and looking for options to repackage them??

Heat shrink is best. I’ll sent this if called to testify, but I have been known to use duct tape in a pinch

When building custom shapes I use an blue paper + insulator, a 65mm clear wrap, and a trimmed down dime tube, I add a proper fish paper insulation on the top and bottom to finish it off. The reason for the dime tube is, it’s easy to cut a nickel strip and replace a damaged/worn out cell when it’s all glued together.

For straight forward flat packs, I just do the can treatment, add the fish paper insulator on the top and bottom. It’s very east to use methyl hydrate and a q-tip to separate the P and remove the 1 bad cell. where do you get the tesla batterys and whats the can treatment as its just for flat packs im looking?

I had an issue with my 18650 pack where the heat shrink was putting too much pressure on the cells and made my battery fold somewhat down the middle. The folding was probably due to an error on my part. I had a significant gap between the two rows of cells I think because of my balance lead placement. I ended up just cutting the heat shrink lengthwise to relieve some pressure and used kapton tape to seal the gap along the cut. I 3d printed a temporary enclosure in PLA. I plan to re-print in ABS once I come up with a nicer design. I did end up cutting the shrink wrap to relieve some pressure that was bowing the batteries. I think it ended up looking cooler this way. ...

I use a sheet of Lexan under the pack, then shrink wrap it… where do you get the tesla batterys how much did it cost?

Get into 3d printing. Decent printers are available for 200bucks.

how much did it cost?

You have to realise that a new TESLA 90D pod that has 16 modules sells for $32,000.00 USD. When the shelf life expires, they are sold off at a discount, generally $22,000.00 USD. 22,000/16= $1,375.00 USD each is the cost of each module. The guys selling the new modules aren’t really making too much on the whole deal. There are a lot of used modules out there being sold as new, request a picture of the battery’s clocking from the dashboard if purchasing used, less than 500hrs is your best bet. Offer a devaluated price based on the % used from 2000hrs. Use discretion, ask questions, you could be getting cells from a 60kWh module, 30% lower capacity than the cells in the 90/100D modles… Capacity wise good cells, too bad in end they still cost 3,37$ a piece and i assume u still have to disassemble the pack to use them.

Is it good at airports when it is like part of electric device? Because normally u cannot go to plane with own builded battery…

lexan is the stuff, undestroyable

u still have to disassemble the pack to use them.

You will have damaged cells, its unavoidable, consequently the price per cell increases. Here is a quick video on the disassembly process: 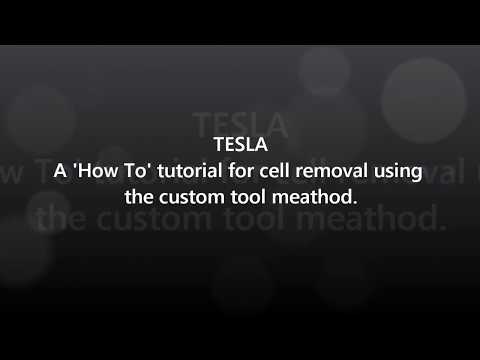 The difference in the 60 and 70 is the total amount of cells in the pod. TESLA throttled back the 75 to 70kWh, and gave owners the option of spending an extra $15,00.00 for an unlock code for the extra 5kWh… The 85kWh is the one that had the controversy, TESLA overestimated the pod, they claimed it had a 3500mAh battery, when in fact it was 3450 mAh…Many people complained and called foul. To remedy the 85kWh issue, TESLA released the 90kWh, they underestimate the cell @ 3500mAh, when in fact it is 3550. This should alleviate all claims of misrepresentation of the cells. The 100kWh has more cells than the 90, same cell, NOT the 21700 as some people are claiming.