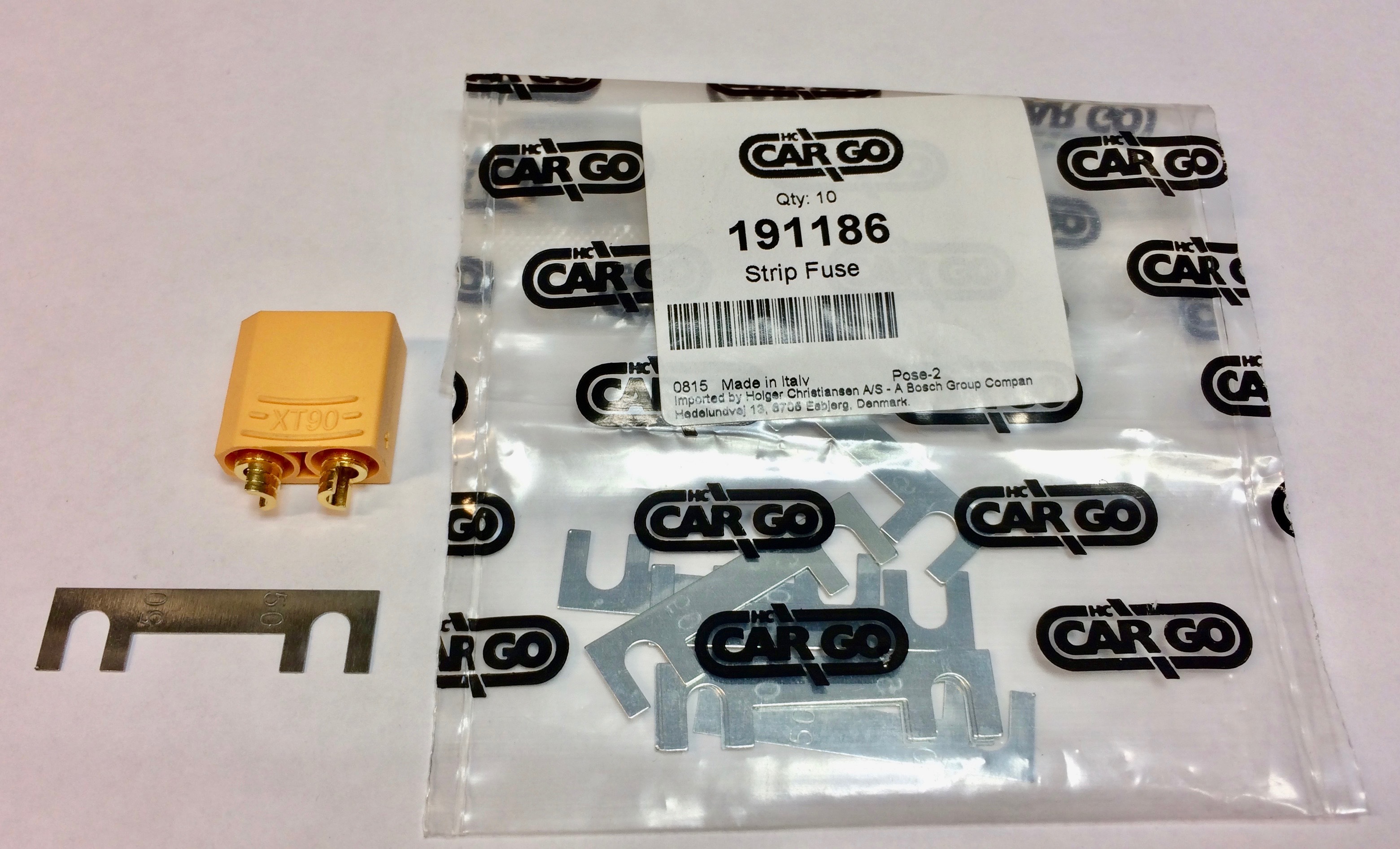 The fuse is made of zinc, this metal is soft, easy to bend and cut. I shaped it a little bit with side cutting pliers. Then I bent it and soldered to male part of XT90-S. Benefits: • Cheaper than a MAXI car fuse • Saves the space inside, doesn’t need a fuse holder • Easy to replace if you make 2 and carry a spare

Wow, good find! I actually just made a loop key last night since my anti-spark switch got fried. Now I want to make another using your technique

I agree with this… with one caveat. You’re right that it would be better to have the XT90S male wired inline with a female XT90 loop key; with the key disconnected, a female “live” end is much easier to accidentally connect the poles**. BUT I would only recommend this if you are NOT using XT90 connectors anywhere else in your build. I almost wired my loop key just as you’ve described, but my battery pack has a XT90S male output. Building a female XT90 loop key would mean I also just built a “shorting adapter”… aka a very convenient way to blow up my battery, if for some reason it was hooked up incorrectly

**NOTE: With a loop key, touching the two poles together would not actually be a short in this case. It would just connect the circuit.

Is it strong enough to be pulled out?

Cool writeup and pics. This would be great to add to any loop key as added insurance (fused).

One thing though - This has no anti-spark as you have it setup now. This is just a fused xt-90 loop key.

Adding this exact setup to the anti-spark loop key would be super simple and give you the best of both worlds (anti-spark, AND fuse).

He has the female XT90-S on the other side.

E: If you plug in your loop key directly to your battery, you have bigger issues and should honestly not be building these

XT90-S anti spark were made to replace the battery connector (female) and not the way many in here do it where they solder a male to the battery. It is extremely bad practice to solder any kind of male connector to a battery as it could easily be shorted by a metallic surface or any conductive debris.

E2: Regarding @jmasta note, absolutely not. Touching both terminals of the batteries with your hands will not kill you… Where did you get that from???

I’d argue that is up to interpretation. Yes, the XT90S plug has embedded female bullet connectors, but it physically goes into the XT90 socket. It that sense it can be viewed as either male or female. Even the internet disagrees: 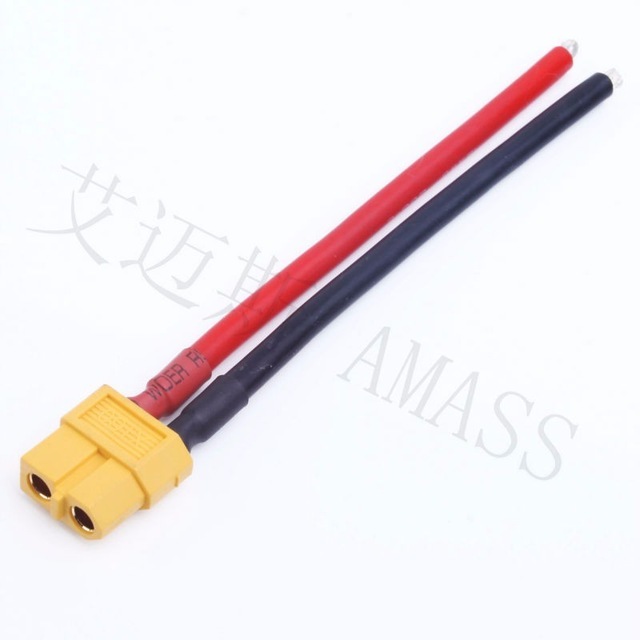 I did not mean to offend you and no I dont know you but it’s true, its bad engineering to put male plugs on a battery. Check literally all LiPo makers that have XT, EC or Deans connectors and tell me which end is on the battery.This is done for a reason. If you are making a design with a loop key in it then obviously you can take precautions but if you connect a short across your battery, that is on you for being careless. Not that you’d ever be able to get the whole thing on (just ask one of our interns who shorted a 10S10P pack. Spoiler, the bullets melted and sparks flew everywhere as he dropped the connector). If you are the designer and only user, you should know your system well enough to not make that kind of mistake.

By the way, here’s proof you cannot kill yourself holding both terminals of a 10S4P pack. I’ve also done this on a 10S10P pack but cannot post pictures Sorry for the crappy angle on the second picture.

By the way, here’s proof you cannot kill yourself holding both terminals of a 10S4P pack. I’ve also done this on a 10S10P pack but cannot post pictures

You’re using one hand. I specifically said touching the negative terminal with your other hand. Those are very different scenarios

I edited my post so as to not scare away newcomers. However, 50V (12S) is often defined as the threshold at which many OSHA regulations begin to apply. While it is not likely, serious injury is still possible

Exposure to 25V is also clearly safe with no risk to human life. It is only when we reach around 50V that we start having issues with shocks that are capable of delivering more than 13.5 W-sec in less than 3 sec. At 50V, the power equals 5W, and the calculated exposure time is 2.7 sec. (5 × 2.7 = 13.5). This assumes a “worse-case” body resistance of 500 ohms. Most people in reasonably good physical and mental shape can still react quickly enough to release themselves in 2.7 sec or less from a 50V shock. When the voltage level is 50V and above, however, it delivers too much energy in less than 3 sec, which leads to electrical fatalities.

But you are right on the naming convention. My bad! Either way, male/female is a pretty confusing way to describe an XT connector. Most people would probably (incorrectly) classify the XT90S as male. It’s 2017 and even our connectors don’t know what sex they are anymore!!!

@jmasta, @JohnnyMeduse
Second picture is of me using both hands. That’s why the angle is so weird. I couldnt find a way to hold probes with both hands and take a picture with my phone… Also 500ohm resistance?!? Is the test subject drenched in sweat and are we applying paddles to the chest? At 100V the NIOSH states hand to hand resistance with a large contact area circuit with dry skin as:

Male is female. Female is male. We’re not going to die! #alternativefacts Erm ok… I take it, you dont take being wrong well…

That was a joke. I honestly stopped caring

@rpasichnyk Have you tried to burn one? I am going to order a few strips since this would be nice and cheap to make.

PLEASE… you should know that wikipedia can’t be a justifiable source… Also in the case of electricity and current, what is not killing you make you weaker.

so here a interesting article about exposure to low voltage:

Wikipedia? When did I state that as my source? In fact the paper you linked has the same resistance values I posted earlier… (Page 5 Table 1)

I will read it fully tonight! If there are any specific sections you want me to read, by all means let me know. Section 3, accidental electrocution looks interesting

I am going to make a test this weekend. Can’t think of other 50A power source so will just put a LiPo in a fireproof bag and do it outside for safety reasons.

I ordered a few 60A ones. Will let you know how that goes when I get them

I touched a tube lighting end connector with my hand by accident when I was trying to align the two end probes that’s stick out of it to the housing. You feel this heat jump through your body when the electricity passes through you. Lucky enough my hand came off or it could have done more damage.