I want to sell my electric skateboard

i have built my electric skateboard. i want to sell my board to fund my next build. does anyone have any suggestions on ways to sell it. also i need to find a way so the buyer could’nt sue me if something went wrong with the lipos.

@bucketsquad add pictures and pricing here. There is no way to stop someone from suing you, only measures you can take to avoid being found at fault. In the US, anyone can file a lawsuit against anyone else at anytime.

well It is really really hard to sell completes here since its builders forum and most want to actualy build thir own, best bet is sellingg the parts IMAO.

most of my customers are from here. All you have to do is sacrifice 7 virgins to Dark Lord Skatan. I know that sounds easy, but hoes be trippin. you can’t find a virgin these days. Most women come out of the womb now dating some loser already and from that point its you know… kind of impossible.

So i decided to breed my own virgins then sacrifice those. It took me probably about 12 years total to make that happen and i had to keep them locked up in a basement to shield their heat signatures from helicopters looking for human traffickers. I’ll probably write up a how-to on that and post it and include pictures because it can be difficult to dig a basement under an existing house from within a closet access panel with a folding army shovel so i have a few tricks on that i’d like to share with the community.

Next you have to verify the virginity using an ancient technique involving a feather and some frog guts. I’ll just let you google that because i don’t have time to write that all up here but you do need to know that females can spontaneously lose their virginity at any time because like i said, hoes be trippin.

If by some chance you do actually sacrifice a non-virgin, Lord Skatan will of course smite you with fire and brimstone, which let me tell you can kind of hurt a little.

If you do this try to get it on video and post it because i think a lot of people would like to sell esk8s here and my camera ran out of juice half way through the dagger ceremony.

…Unless the board is a super primo, I’d part it out.

This went from pg to unrated so quick!

But yeah, what the first two said.

Quite obviously due to the fact that Dark Lords be trippin.

@longhairedboy lol, what have you been smokin these days? I don’t know if I can even wrap my head around what you said today, lol.

I’m re-developing sarcasm from scratch, which is going to require quite a bit of brutal testing. I know its a lot of work but i think it will be worth it. I think most people are board with typical sarcasm by now. I’m randomly selecting test subjects to be fair to everyone. Since this isn’t a behavioral component developmental forum i hadn’t brought it up before, not to mention it would likely spoil the entire test pool. Wait…

@bucketsquad post it you’ll find a buyer. somebody will want it for parts or one of the more wealthy members might be an angel and take it off your hands just to help you out.

Damn, everytime I read a post like this from you. I just want to have a pint with you and talk skate.

Why do the dark lords always want virgins? 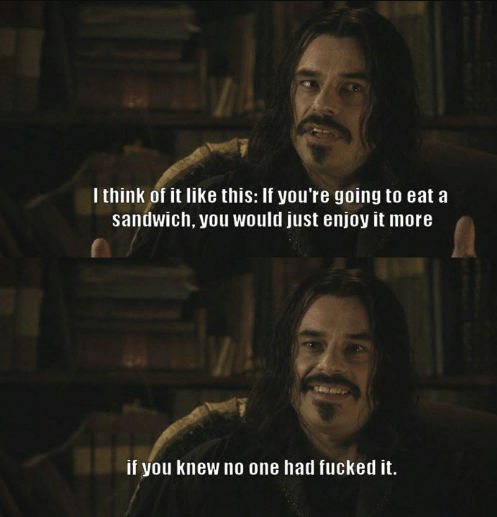