Hello everybody. My name is Fulvio, I’m new here and new to electric skateboards. I recently bought a prebuilt chinese rebranded board called xskate27. I did it because of i had the opportunity to pay it monthly. Now. Its maximum speed when i hit plain streets is acceptable but when I have to climb streets with inclinations the speed slows down drastically. It can’t push me properly and mantain a decent speed. I’m 91kgs.

Before posting here i tried to study a little bit. The board has an integrated radio controller in the esc and the esc itself is one for two motors, has a specular design and a servo connector. It mounts 2 250w motors (i could not find a label on them) I’m quite sure they do not run at their maximum capacity and i feel quite frustrated by this.

Now my questions are: How can I improve the maximum speed? Have I to buy new escs and a radio controller? Which? Can i modify my actual esc by replacing capacitors or other components of the circuit by increasing its voltage output? Will work? What about the battery pack and its power? Can it allow an higher speed?

Please suggest me how to act.

Have a nice day. Thanks in advance. Hi, I recently made a new battery pack for a BenchWheel dual. I kept the same configuration 6s4p but used newer Samsung 30q cells. Without changing anything else every area of performance was improved, especially climbing.

looks like a swagboard… its a low cost board. with hubs. you should be happy if it can take hills at all… you could try upgrading the esc and battery to 10s. but its the upgrade is going to end up costing more than the board itself…

As simple as change to VESC, get new battery pack.

Technically all of the above is needed to increase the voltage of your electrical system. Increasing voltage is currently the easiest practice to increase speed.

Thanks for the answer. Is this esc good? What about a good battery pack?

Thanks for the help. How much did it cost to you? Will I need a BMC for the battery? Or will I use the existing one from my actual pack?

What do you mean “with hubs”?

I got the cells from here:

and found a 10% discount code online. The next decisions you’ll need to make is to solder or spot weld. I went down the spot welding path using pure nickel strips. Excluding the spot welder I think it cost around £120 in total. Because I haven’t changed the battery configuration and the voltage is the same the existing BMC, controllers & motors work fine.

Hubs is what we call motors inside the wheel

I checked it. I think actually this is my best start. I’ll be able to change the battery pack that is more expensive later. Thanks for the link

I’ve never used it, buts its cheap, and 10s should give you more speed and hill climbing, but I think you might end up with heat issues…

dual vesc would be best, but thats 3x the cost plus a remote…

Yeah i think that you need better batteries, just generic 18650 cells are pretty bad at putting out any AMPS!

Here is a great site with lots of info on pretty much all available cells: http://lygte-info.dk/review/batteries2012/Common18650comparator.php You might even find your cells on there and here are some top choices: https://reactual.com/outdoor-equipment-2/power-sources/best-18650-batteries.html

For example, if you compare samsung 30Q to some other ones or alternatives you might consider you will see that they are really good

Thanks for the tip.

Don´t use that pack. It´s only a 10s2p and lacks on capacity. Get at least a 10s3p, or better a 10s4p to avoid voltage sags and short life cycles of your pack. Otherwise you have to buy a new pack in a few months

Which would be a cheap but better solution? 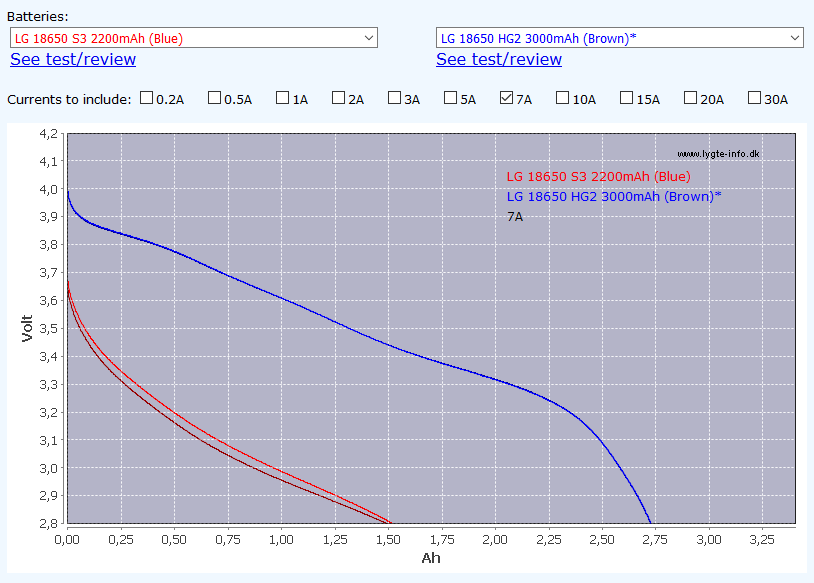 Also look at this, that pack does not state the actual cell used. Even comparing two cells from the same brand there can be huge differences!

And this is only for 7A, because the red cell does not have a curve for higher currents, probably due to too bad performance. A drop of 0,6v(this is the difference between the good and bad cells, and is dropped inside the battery under heavy load) versus another better cell will make a big difference in performance. Probably 20% in top speed and maybe 40 % in power. And i mean, 7Amps shown here is not alot, you have 2 cells in parallell so each would only see 3,5 in this example but i can easy draw 70 amps on my board, im even a bit lighter than you still.

Does your current battery get warm after heavy use? for example if you draw 10 amps from a cell and the output drops 0.5 volts during the draw, thats 5 W(amps x volts = power) of heat generated in that cell. for your battery with 7s2p that would total 70w of heat applied in the battery… this would also land you at an output power of around 400-450w… with close to 20% energy being wasted to heat in the batteries alone!