I started this build in early June and I’m still on it. It takes time because I’m keeping changing ideas about what I finally want.

So let’s go for a quick presentation then I’ll try to retrace the history of the build. Starting prototyping, making and coding my home made electronic board :

At this point, I wanted to communicate with the VESC though UART, display datas on the LCD, datalog on a microSD card. and control the lights. The board shall also be a hub to supply power to electronic devices (USB plugs, BT speakers…). Power supply : UBEC 5A + 2A channel switched by RC receiver using CH3 button of the GT2B. After many hours of coding and modifying the existing Rollinggecko’s library (in order to include temperature and fault code management), I finally got a working version of my system. Almost working I should say, because I was unable to use LCD and microSD board working simultaneously… 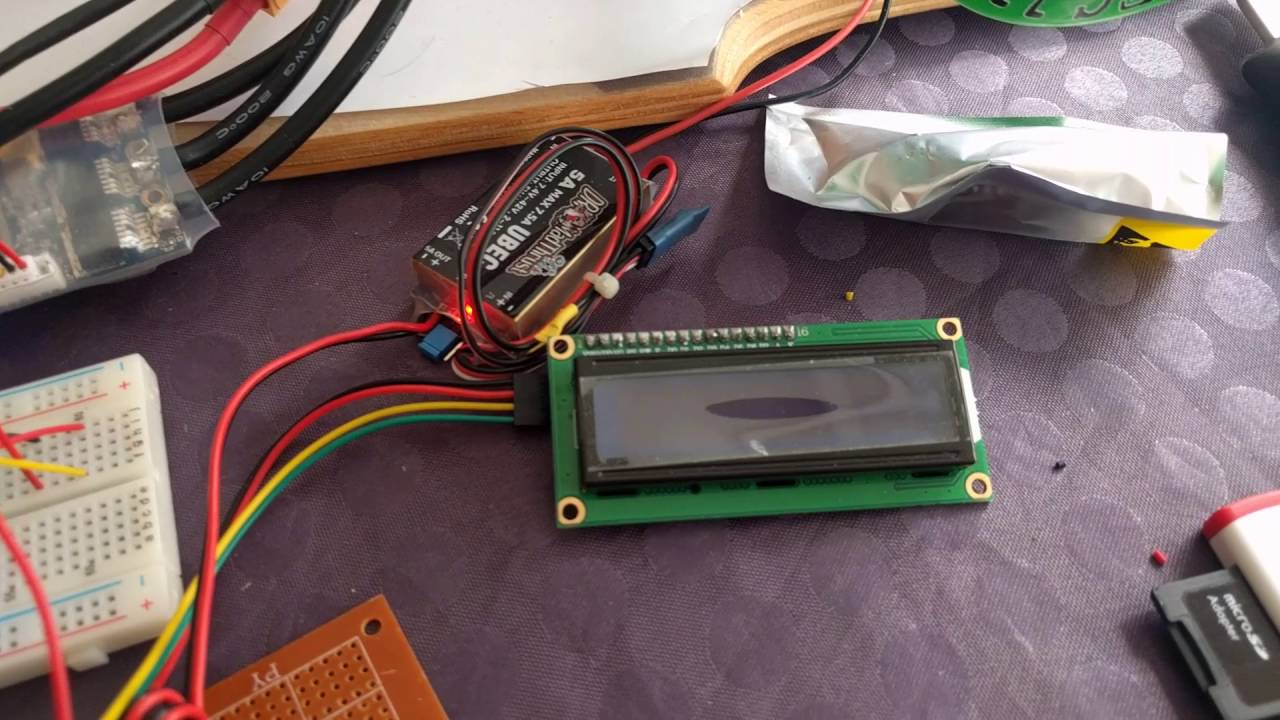 Then I switched to a brand new stuff for me : create the enclosure ! It was not so difficult finally and I’m pretty happy with the result. I found with carbon fiber with blue polyester fiber cloth very beautiful ! So I decided to cover the bottom of the board with it.

But before, I painted the edge with the ABEC11 flywheels green color and route the board for the lights wires. Because the wires are thin, I could put them into a “duct” (actually a bad quality shrink tube I didn’t heat) to be able to remove/add/change a wire if needed. After sanding and preparing the routes, time was come to cover the whole board. Not whole in fact, I wanted to keep clear the hidden surface to avoid blocking RF receiver with a total carbon fiber enclosure. Well, it’s not Whitepony’s quality but anyway… For a first try, it’s quite enough for me !

And with a epoxy resin layer on it (edge included), if you don’t look at it too close, it’s clean enough. That being made, I came back to electronics and build the Mad munkey remote form @FLATLINEcustoms . Amazing mod after all ! While the 3D printer was still hot, I printed headlight and rearlight enclosure (from scratch). I published the headlight print on Thingiverse if you’re interested in : http://www.thingiverse.com/thing:1813811 I still have a little change to add and it will be in release status.

http://img15.hostingpics.net/pics/987860panelboardv11back.png (I don’t have pictures of the real part, sorry)

At this point, I tested Bluetooth modules (HC05) and played a bit with VESC Monitor. I fell in love with that !!! But I had to choose between my own Arduino system and BT because the VESC has only one UART port… I chose BT. So I threw my previous board away and started to build a new one with these small features : Time was come to put all these stuff on the board and screw the enclosure.

But I missed some point during the build and the enclosure was too small to fit with the implementation of the elements. Basically, the only way to close the box is to put the powerswitch above the BMS. So I designed and printed a structure to make it possible without electrical and thermal issues. I had to modify it because the switches on the enclosure are hitting it… Here is what the build looks like presently : Yesterday I decided to drill and set the insert for screwing the enclosure. I was still a bit “tired” of the party and didn’t make a good job…

I cut the headlight wires (I drilled in it, I forgot it was behind

), the powerswitch doesn’t want to switch off anymore and one of the LED of the rearlight is fried. Time to sleep I guess.

This is really great! I like your 16x2 Arduino display

If you had two Bluetooth module modules - one directly connected to UART and another connected to your Arduino - wouldn’t you be able to use it simultaneously with the VESC Monitor app on your phone? My understanding of Bluetooth is that it is analogous to a message board… as in, one source can post data which can then be read by multiple devices. I think it’s possible to have the best of both worlds here. Your Arduino system + smart phone bluetooth app

@jmasta : That’s not possible, because BT doesn’t work so simply. It’s a master/slave communication. The VESC doesn’t give any datas as long as you don’t ask him for it. So it works like this : Master (Smartphone) : “Hello, give me data. Stop” Slave (VESC) : “Here there are : xxxxyyyyzzzz. Checkcode. Stop”

And between both Smartphone and VESC devices, BT modules handle the communication with some handshaking or so to be sure to communicate with the right partner.

Interested in learning how Bluetooth Low Energy works down to the packet level? Debugging your own BLE hardware, and trying to spot where something is going wrong? Or maybe you're ...

It’s quite an interesting tool ! However, I don’t use BLE (I chosen HC05 for v2.0 + EDR BT because BLE has a lower range especially in a carbon enclosure configuration) and my skills seem too limited to implement a sniffer on my Arduino. I don’t think it’s worth it.

Anyway, I keep in a corner.