Hi. I searched the forum and did not quite find what i was looking for, or else i did not understand it the right way. So now im seeking your advice and knowledge. As the title say i want led switch so i know when the board is powered on.

I have a 12s Bms from bestech with e-switch output. But is it possible to somehow hook up a switch with led. Where can i get some power from for the switch. I found these two switches. one with power symbol and the other ones without. The first one here has 5 pins and seems pretty long: https://www.ebay.com/itm/Red-Power-Indicator-LED-19mm-ON-OFF-Black-Metal-Shell-Push-Button-Toggle-Switch/201600351994?epid=3006426466&hash=item2ef0513efa:g:q78AAOSwXYtYspd1&vxp=mtr And the other one has 4 pins and is a bit shorter: 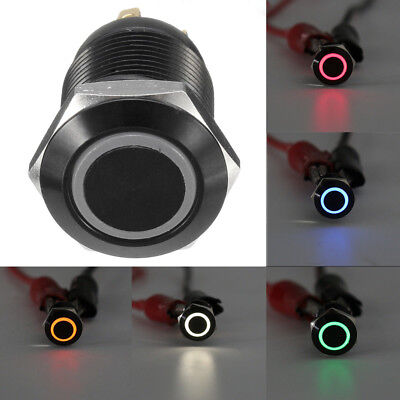 Unfortunately i do not know if the first one is waterproof. But the switches is not the important part. The question is how i would manage to do so.

That is a really useful post I was just wondering how to wire the switch but didn’t remember too do some research, damn this skateboard never stops taking my money!

I didn’t actually use it on my board, Those damned SPDT latching switches are waaaayyyy to long to fit in an enclosure comfortably. I did it on my kids board and was using the Step Down Module anyways to power to some RGB Addressable LED’s…o it just made sense.

I made sure to get advice before I pulled the trigger, but its still working over a month later. Here’s the original thread.

@mmaner okay i do think i saw your post while searching. Does it really work with only one of the e-switch wires? Thats probaly what confused me.

I think i read someone talking about a 3.3v output on the vesc or something is this something you or anybody else knows anything about?

Yeah, if you connect both switch legs it stays off, no idea why. I just heat shrinked and secured the other leg so it didn’t short.

There is either a 3.3v or 5v circuit on the VESC but I don’t want to use it, don’t like messing with the VESC hardware more than I have too, worried about burning them up.

If it works it aint stupid. And thanks. I may see if i can find something with the 3.3v or 5v But yeah definitely not the only one afraid of burning it up

So it is possible to use the 5V from the BEC connector. (reciever + and -) But it is rated for 5v at 1.5A. So as long as the button is using around 1A or so it should be fine. (Could be wrong) Someone mentioned som extra heat that could be building up, but i cant imagine with a small led that this would be a problem. And the buttons i linked is also 12v so running on 5v would mean that the light should be dimmed quite much(i haven’t teste could be wrong)

Okay i kinda answered my own topic here with some guidens.

@Migro I’m using the same type of switch but wired this way: This way turns the bms on and lights the led. The voltage for the led is isolated from the bms e-switch I’m taking 5v pos/neg from empty channel on the receiver. basically, the buck converter on the vesc is powering the light through the cable to the receiver. It’s not a problem for the buck converter since the led is low drain. I’ve built 3 boards with this setup so far. The oldest one over a year ago. It has not caused any issues for the receiver or the Vescs. I used Ollin vescs on 2 of the builds and Focboxes on the 3rd.

Good to know. thanks

Thanks. That actually makes perfekt sense.

And thanks @mmaner your suggestion may be used in the future if more than 5v is needed.

Sorry for reviving a dead thread, BUT it appears that this diagram for the switch is incorrect and a new user just fried his BMS wiring it up like this.

You should never supply additional voltage or run current through a BMS eswitch, it is probably not made to drive a high power LED and even if it doesn’t blow it could still affect it’s functionality.

@Namasaki has the correct diagram, and it can also be used with a stepdown converter.

. @mmaner you should really delete that post. For some reason, I was stupid and did realise that it would connect the power to the BMS. Ffs

I am surprised that nobody else has had the same problem.

I just went with the simple solution

no the namasaki diagram. And just got 5v from my vesc

I disagree. If you use the switch that is linked the switch and the led are 2 separate circuits. So either the new user wire the switch incorrectly or used a different kind of seitch.

It does NOT connect power to the BMS. If you used the correct switch the switch and led are separate circuits.

It was the same switch as the diagram you used. And @TowerCrisis must be right because when I wired up the switch your way if fried the fuse in the BMS.