the remote is new, never used, got it as a replacement for my smashed benchweel.

After spending 3 hours on this im seconds away from smashing all this with a hammer:rage:

Does anyone have an idea what could go wrong?

If you don’t get it sorted I have an extra remote for you. I’ll put it in your package

its kinda sad, finally after a long time i finally am able to work on my board, all i had to do is to set up the vesc and screw on the enclosure and this crap wont work

well its a good sign your registering ppm inside the vesc tool. i take it motor detection was good. not very familiary with that remote i using winning and benchwheel. maybe you can summon the @Namasaki try chanting really hard out loud

Your using the Mini not the Nano correct? And can you describe step by step the pairing procedure you used?

He’s likely asleep it’s 3am in his country. He’s using the gt2b i think…

Yes im using the mini remote (wheel on the side)

Did you release the pairing button after you turned the remote on or did you continue to hold it down throughout the pairing process?

i tried both, nothing worked… i will probably need a new remote

i’m sure you got this but make sure servo cable is plugged in correctly, as in the ground in the correct position.

i’ve done that before and it kind of did what you’re describing. seems like it’s working but not right.

hm…not likely but try a different cable, unless you’ve got a focbox with it built in…

I got a focbox, everything worked with the nano remote but i lost its receiver

i tested the cables and plugs with a multi meter

take a deep breath, step away, clear your head.

sounds like you tried everything. Maybe take a look at this, it might jiggle some brain cells. 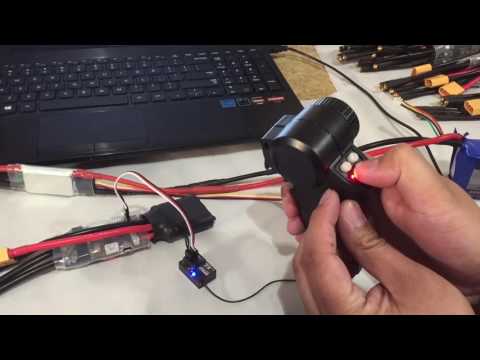 i tried that too, i watched the video like 10 times

worst case scenario you wait for your package

Hey silly question. Did you try with fresh batteries?

I was just thinking along the same lines as @deucesdown Try som fresh batteries. Do not use rechargeable AA’s Because there output voltage is only 1.25 V Use alkaline or Lithium AA’s I use Lithium and they last a long time.