Motor mount wont fix, which solution do you recommend?

So as this felt hard to explain i made a quick video to show my problems with it.

Please let me know how i can get my motor mount fixed to the truck and maybe tell me if i should or shouldn’t solder the mount to the truck.

Also , do you guys think that this problem would disapear with an enertion motor mount or any other model?

Is it just me or is the esk8.de motor mount the least sophisticated one out there? The thickness together with the invariability of the mounting just seems so amateurish compared to the other solutions out there that are much more engineered. @elkick do you have a more universal mount planned for the future?

I think you can rethread your mount, then thread another smaller hole some where on the mount and add a grub screw. That seats the mount and prevent is it from moving laterally, also some people have had good luck putting some heat shrink between the mount and the truck to add a little grip.

I actually tapped a thread all the way into the truck for my grub screw and the screw goes a few mm into the truck, that thing is rock solid now.

I use @torqueboards mounts and i’ve done 3 things. First i replaced the tightening hex bolt with a torx bolt so that i can torque it tighter without stripping. Then i put very thick heat shrink tubing between the truck and mount to act as a grip and shock absorber. And today im putting a jb weld between the truck and clamp aswell to prevent lateral movement. Note DO NOT weld tb’s mount, its 7075 aluminum which wil develop micro heat fractures from welding, ONLY chemical epoxy is safe.

I have had my mount loosen twice, hoping the jb weld will fix it permanently.

I had thought of using JB weld as weld, just as a brace either side of the mount, but was not sure if it would hold up to the vibration. How long has yours held up and is it still good? The heat shrink idea seems to be a good one though, may do that on my Paris trucks should I ever see them moving.

Im putting the jb weld on today, exactly like you said as a brace on either side. Ill post back how it works.

ack how it works.

That sounds really interesting, maybe thats a great solution! Thanks for the input to all of you! Maybe someone else has a better solution.

but so far what i see is that mostly all mounts do have some issues.

do you guys think that this problem would disapear with an enertion motor mount or any other model?

The one i’m using is a caliber truck

So you think a enertion mount would fix it without all this problems? thanks!

Ups, sorry. I just saw “CALIB…” in your video. I thought it was another kind of truck. It is strange, it is supposed to fit in Caliber trucks. 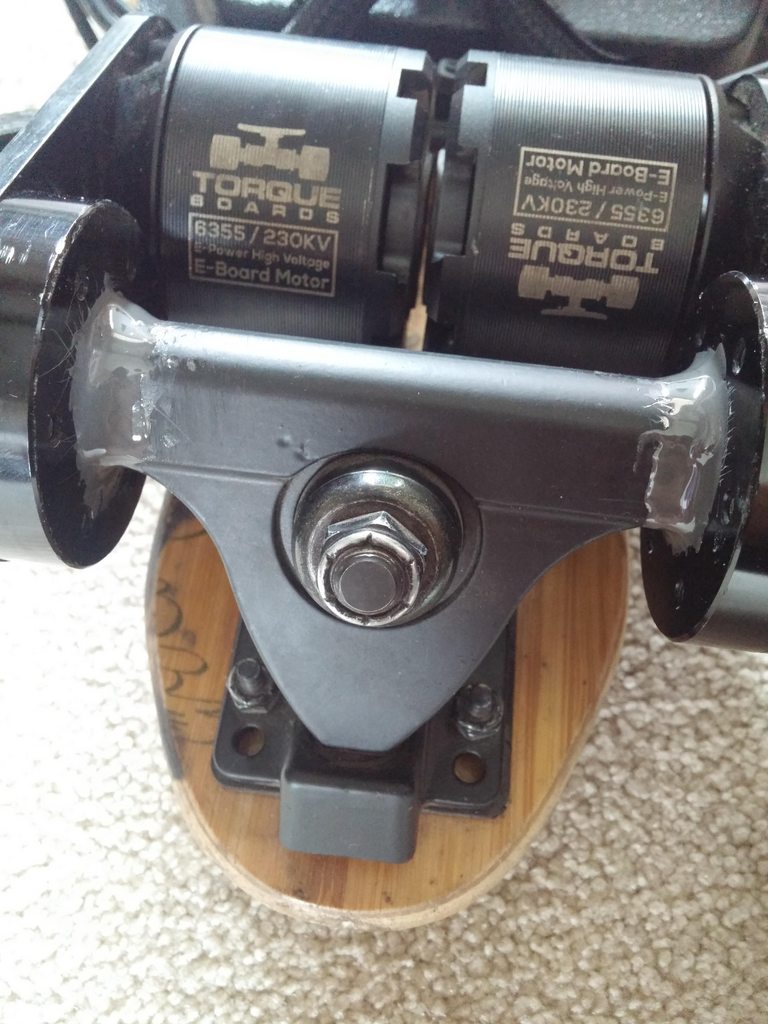 JB weld drying! Note that the mounts were very secure just by bolting, the weld is for vibrations.

I will vouch for Enertion motor mounts…

The mount is the the key to stable build.

The design of that mount is poor. I guess you could rethread the mount again but you would still have the same problem. Go for the DIY v4 mount instead. By far the best mount available. Or get the enertion mount which is also good and is cheaper.

I’ve used Alien Drive Systems mounts for Paris (older v1) - they rotated on me and didn’t have grub screws to secure. Not my favorite. Before i fixed w/ JB Weld that board was stolen.

I’ve used Enertion mounts - love them and the CF bling. Range of flexibility on angles for non-standard setups is their only limitation. No issues, simple to setup and rock solid. Only Con is limited adjustment angle on drop decks or similar placement challenges.

DIYes mounts v3 (really their v1/v2 i think) - love the full adjustability and solid when setup correctly. Can be fiddly to get setup at the start, but beefy and uber-adjustable for any type deck a huge +.

I’ve setup one Psychotiller mount (used) and it keeps coming loose. Super frustrating. The truck clamp portion is too large, and the shim wiggles out when riding… JB Weld likely next to help fix.

I’ve not tried the new DIYes v4 mounts might have some wheel size limitations if you run bigger wheels (>83mm like 90/97mm) since the belt tension uses the motor mount screws and usually the 4th under wheel can’t be reached. I have a set of the v4 on order to use, but might limit wheel size to a 83mm as a result. I had the same issue with Psychotiller’s mount.

I’ve used Enertion mounts - love them and the CF bling.

remember, the CF won’t serve as a heatsink though!

The motor mount looks home made to tell you the truth. Shouldn’t be sold if it’s not reliable IMO due to the users’ safety. You’ll have more headache than pleasure that’s for sure. I have both DIY and Enertion’s mount. Riding with Enertion, i’ve decided to get another one. DIY’s V4 has fitment problems. Doesn’t look solid as the Enertion’s either. The DIY’s V4 requires a heatshrink tube to get it decently tight but I can still wiggle it with my hand with a lot of force. That’s why the above photo shows it being JB Welded. If the V4 would make the opening a tad smaller, it should clamp on better. The only negative thing I have to say about the Enertion mount is the CF disc which you have to be careful when tightening the 3-6 bolts.

Well, after some fixing and using a stupid cable flange i i’v already used it for 15km and had no issue yet, it isn’t perfectly fixed but doesn’t move .

Here is a short video i did to show it

It’ll work as a heatsink… Just a really shitty heatsink

@Jinra @link5505 What do you mean with CF? What are you guys talking about heatsink? I got lost on this point 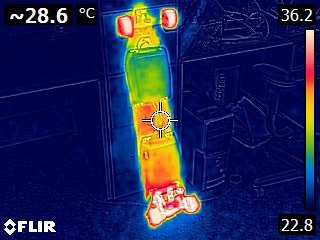 We have a cool FLIR infrared camera. Here are the board temps after a moderate 3 mile ride in 80 degree (F) weather.

Aluminum mount seems to draw a lot of heat away from the motor and into the trucks.