I am having an issue where my motor just doesn’t spin fast enough, I have tried many different settings on the vesc to try and help it but it just isn’t going that fast. I am wondering if my power supply (3 5000mah batteries) isn’t enough to power the motor efficiently but that doesn’t seem like that would be the case. The motor spins decently fast with no load but when I connect the wheel it just doesn’t spin fast (2-5mph) (3-8kph). Help is appreciated thanks. My set up Torqueboards vesc 3 5000 mah batteries in parallel 6374 190 kv torqueboards motor 80mm wheels with 20 tooth motor pulley and 74(counting may be off a little bit) tooth wheel pulley.

What voltage are you batteries not clear from the description also include screenshots of your VESC configuration, could be low voltage cut off or some other limits. If they’re in parallel you’re not getting 33.3v

If it is 3 3S LiPo in series it’s effectively 9S you should be able to check the voltage with a voltmeter on the leads going into the VESC. Battery cut offs look okay though…

Your battery max seems really low why 25A ? If they are say 20C batteries you can pull 20*5Ah = 100A from them “safely”. VESC can’t handle that continuously but should protect itself in terms of thermal cut off if things are getting too toasty.

Edit this is a bad idea.

Your battery max seems really low why 25A ? If they are say 20C batteries you can pull 20*5Ah = 100A from them “safely”. VESC can’t handle that continuously but should protect itself in terms of thermal cut off if things are getting too toasty.

Please Don’t it’s playing with fire… 25A to 40A is more than enough, best thing to do is starting at 25A and then if you don’t feel like having enough torque, then ramp up the current little by little…

Hmm yeah fair didn’t meant to imply setting it up to 100A right away but saw a few other threads that it helped to bump that up for better performance. If it’s only going 5mph though sounds like something else is wrong at 9S with 25A you’d be pushing 825W through the system so you should be moving faster than 5mph.

Also @DaffieT connect the vesc to the bldc tool and go on the tab “Realtime Data” and then check the box in the right corner “activate sampling” then take a screen shoot. Sorry for replying so late. had a dinner 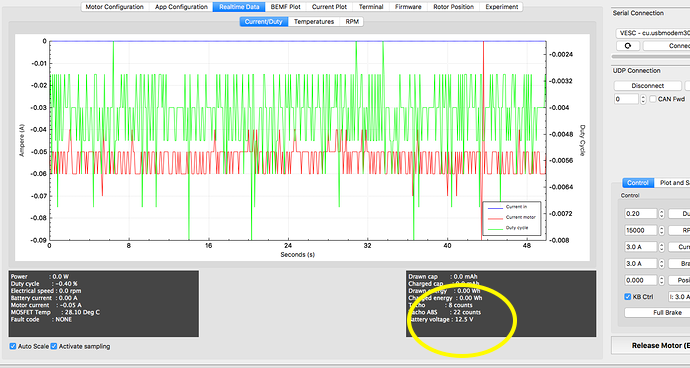 Hmmm, I guess I mad a big mistake, ill draw my setup one sec. Your Drawing look good, can you poste some picture of your connection ?

Looks like you made a series circuit then added it to another series circuit which should be fine but there’s sort of an extra connector in there it could also just be one negative lead from first battery then positive to negative from one battery to the next until you get to the last battery and you have the positive from that one to connect to the VESC. can you give me a visual?