In case it’s not painfully obvious from the photos this is my first board lol. I wanted something to get me to and from my uni a bit faster than walking, but a bit more portable than a bike. I’ve got experience with other electric stuff, I built an escooter and motorised a trunki, haha, but this has way more power than anything else I’ve ever built 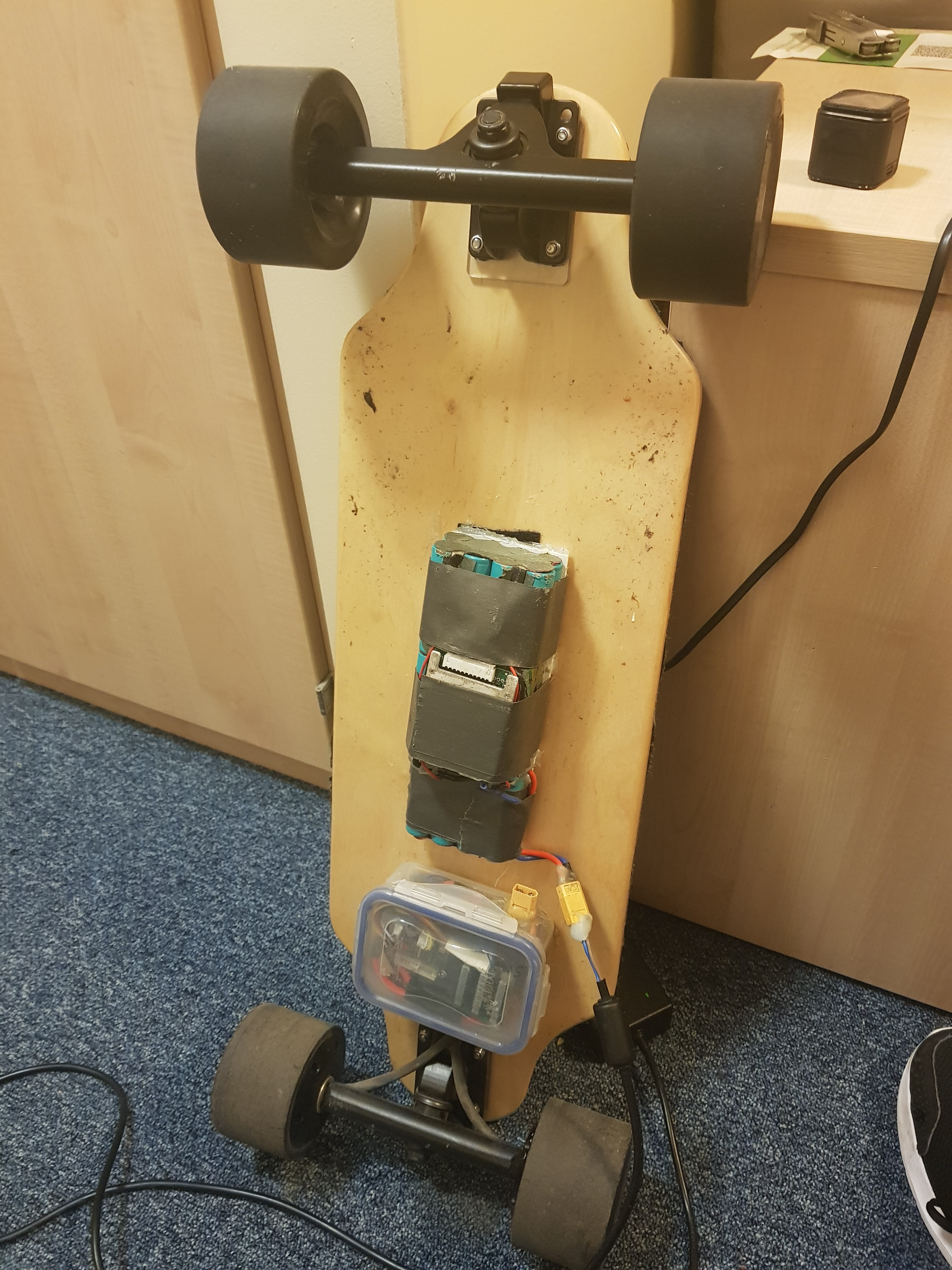 I grabbed most of the electronics from Maytech, the 90mm 800w (but I turned up the current in the vesc so they’re running at more like 1200W) hub motors, a pair of basic VESCs, trucks, front wheels etc. The deck was from Amazon, I wanted a short deck for portability and manoeuvrability, but holy crap is it uncomfortable over bumps haha. It’s made by a UK company, ridge riders (I think). Yes, the electronics compartment is a lunchbox. works surprisingly well. Pack came out of a “hoverboard”, my brother had, and then broke one. it’s a 10s2p pack with Samsung 13q cells and a BMS. It’s definitely the first thing I’ll replace, but I can’t afford it yet, I’ll go to a pair of 5s lipos or something. Control is a firefly remote, Software is excellent, I modified it to make it printable on my crappy printer, I ended up redesigning the interface between the thumbwheel and the housing because my printer just doesn’t have the tolerances. I used some small model bearings to make the action butter smooth. I’m using an LC filter and some extra caps on the receiver, but it’s still cutting out at high power, I think upgrading the battery would help with that, but I’m going to beef up the filtering too. 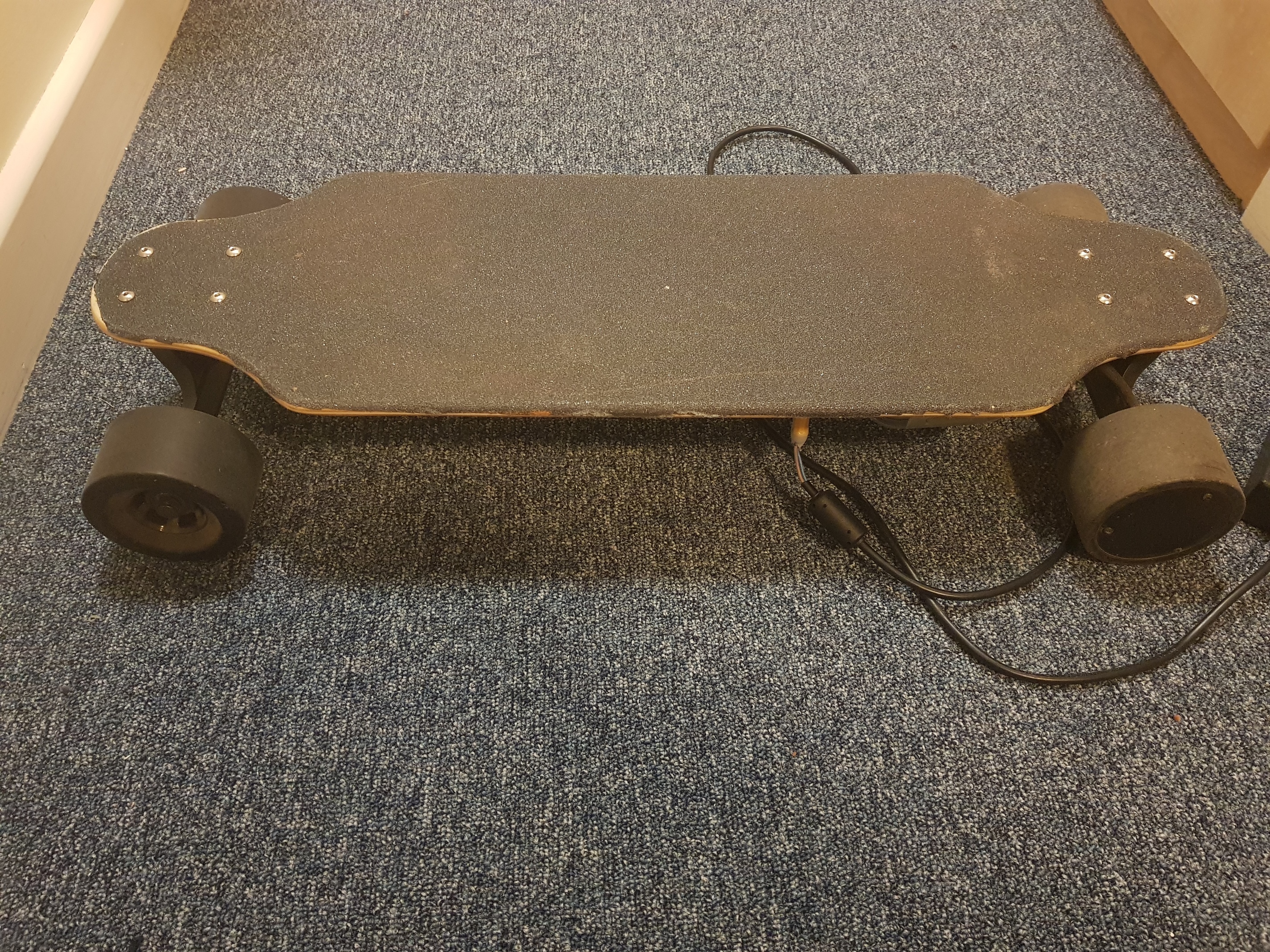 As for performance it’s pretty good, the battery is pretty shagged (was discharged to 10v when I salvaged it from the hoverboard 2 years ago) so it struggles on extended hill climbing, but on gentle hills and flats it’s excellent, a bit uncomfortable too. manoeuvrability is excellent, 90 degree turns at junctions are no issue, curling in and out of pedestrians also not a problem, my only complaint is the brakes aren’t very linear, but I’m sure that’s my incompetence with vesc at play and not anything else. Aside from the BLDC tweee noise, it looks pretty stealthy so it doesn’t turn many heads, which we can all agree is a good thing. What do you infinitely more experienced guys think about my creation?

Good little first build. Might want to make something to cover the battery from rocks and such.

Thanks mate, I’ve already ran it through a puddle that looked a lot shallower than it actually was haha, bms wasn’t happy. I meant to create a housing but i plan on replacing the battery anyway, shredding the battery to pieces seems like a good way to accelerate that

Erm well it ain’t gonna shred… more like burn. And when it does it’s going to take out the rest of the build with it, I’d get a case or buy a new battery.

where are the hub motors from

BMS aluminium heatsink is the lowest point on the board, it’s already had a few scrapes, i’ll do it properly when i replace the packs

maytech, they also supplied front wheels, all trucks and the vescs. they also can supply a remote but i thought it was ugly

Cool little budget build but change that battery as soon as you can. Charge it outside of your house and never leave it unattended while doing so. Those hover board batteries are renowned for catching fire. Serious. Good choice on the drive train though. Maytech are good quality and not the cheapest so when you get the rest up to par it will be a solid little commuter.

Thanks for the tip mate, but i’ve has this battery for 2 years now, used to use it in my escooter, it’s got proper samsung cells so it’s not the dodgiest china battery, BMS over current protection doesn’t seem to work but I have checked and it does balance cells properly when charging. That being said I am still going to swap it out soon because it is pretty dodgy

Where did you buy them thru?

Your board looks cool!

I plan to build something similar to take with me on the airplane (hand luggage) so the deck has to be short (max 68cm).

Found the same deck (ridge), they even have a shorter 22" version but thats probably too short. Twintip is ideal so you dont get wheelbite.

Can you compare riding feel to a normal sized longbard?

Yeah i saw the 22" one, but i rode a 22" board and it felt like a rollerskate, the ride is a darn sight more uncomfortable than a longer deck, but you can turn sharper corners and pick the board up from the front truck with no hassle at all, no scraping on the ground or anything. I run my trucks uber loose, but this is my first skateboard of any kind so i’m used to it, my friend who has rode normal longboards a lot picked up a speed wobble and nearly went into a metal pole.