My Experience with Kevin Dark

Let me pre-empt what I’m about to say with this. I accept that I made a mistake trusting someone I have never met and barely know of. PayPal Friends and Family should be for just that, Friends and Family. So I take full responsibility for that part of this and I’ll accept the lost. That being said, of someone offers you goods and services, and you pay the as expected then they in turn should return the favor and deliver on said goods and services. That was not the case in my dealings with Kevin Dark. He’s taken me for quite a ride and has taught me a lot about dealing with folks here, lessons I won’t soon forget. I am posting this to warn others, especially if you’re not in the UK or Europe in general, that you should be weary of anything he promises. I’m sure others have had a positive experience with him, as that is why I ultimately decided to do business with him, but I have now come to regret it and only want to warn others. I’m not the only who has a story like this, at least 2 others have contacted me about similar experiences. I know I’m not big here or a builder, but just about any member of the NYC Eboarding Collective can tell you that I’m a honest guy, nice to a fault, and trustworthy, and I would not do anything like this if it wasn’t warranted. In fact, I hesitate as I write this, but after 4 months, a lost deposit, and no battery to show for it, this is to be done.

I ordered a battery from him February 11th and today, June 11th, I still have not received anything but empty promises and excuses. First he missed his own stated turnaround time of 14-21 days, then claimed he sent a battery that he had not even started building. When he finally claims he has mailed it, it got “lost” and I never received anything. I asked him for a refund multiple times but he has declined. I asked him for replacement pack, but he declined that as well. He has been less than upfront about the whereabouts of my pack and has shown little to no interest in resolving this issue. I had to constantly reach out to him for updates while continues to take new orders and post on Facebook about building batteries. Please be aware of the kind of service he provides. He believes he is doing you a favor by rescuing you from your “shitty evolve battery”, but it sure doesn’t feel like a favor at all.

First he missed his own stated turnaround time of 14-21 days, then claimed he sent a battery that he had not even started building. When he finally claims he has mailed it, it got “lost” and I never received anything. I asked him for a refund multiple times but he has decline

Didn’t he send using a tracked and insured shipping service?

Says because it was a battery, that he couldn’t insure for the full amount. Had to call it something else and only insured it up to 100 pounds

Possibility they seized the package when they found out it was a battery. In most cases it’s illegal to send lithium ion battery packs so what ever service he was using was most likely against sending liion batteries but he lied to them so he could send it. And then also lied about the item value

Starting to become a trend.

Is Kevin Dark Around?

@darkkevind Bro… A response would be greatly appreciated regarding the batteries!?

@moderators… Where is the other thread about about Kevin Dark ??? seem like someone as deleted it ??? Nha he disapear…

just policy, has nothing to do with a dictatorship.

Think they are that and locking them

Yeah but when it start to be more than one person…

Oh @darkkevind we know you are out there

So the policy is fine (or actually, it can discussed as well). The question to ask is where’s the best place to do reviews of sellers, shops etc? Google? Facebook? 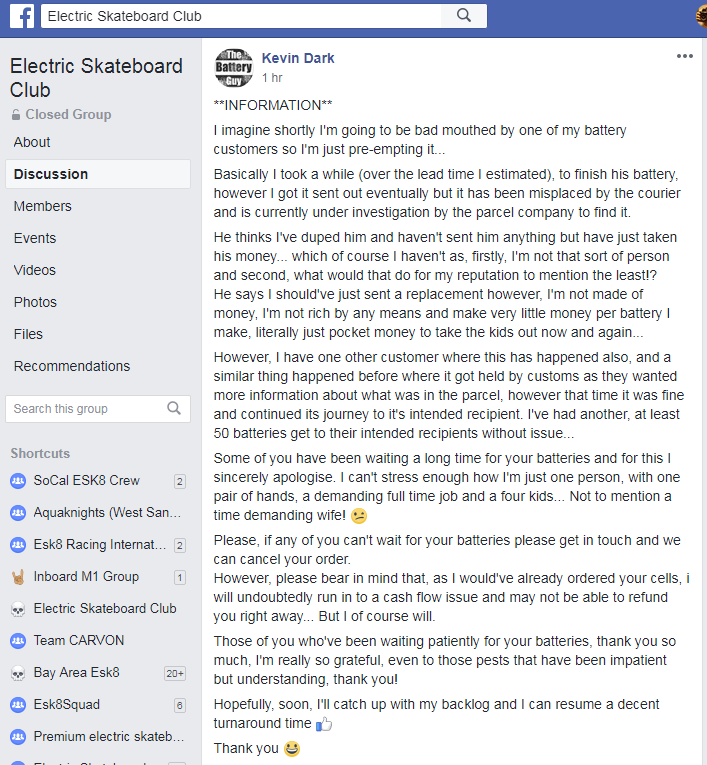